Fertiliser use could be Reduced 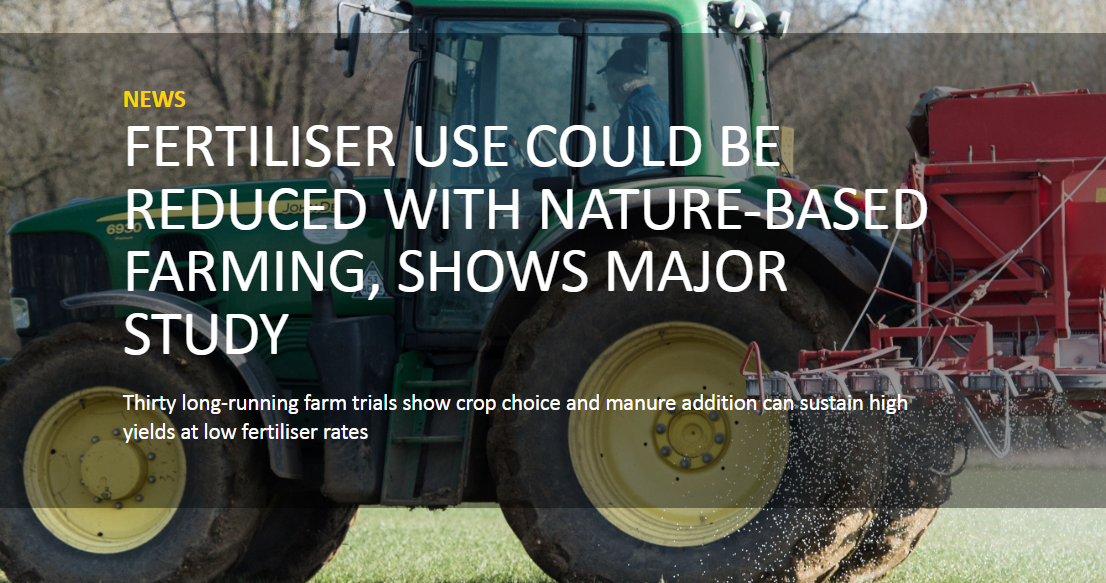 Analysis of 30 long running farm experiments in Europe and Africa has shown that the high crop yields usually obtained using man-made fertilisers can instead be achieved through a combination of more environmentally friendly practices.

Using an approach more common in assessing drug trials, this is the first time a major study has compared different farm practices that intentionally work with nature to boost yields and explored how they interact with fertiliser use and tillage practices.

Published in the journal Nature Sustainability, the report shows that low levels of fertiliser can produce high crop yields if supplemented by practices that support farmland ecosystems, such as growing a greater range of crops, growing plants such as beans or clover that enhance soil fertility, and adding organic matter in the form of manure, compost, or cuttings.

In contrast, using these practices along with high levels of chemical fertiliser didn’t generally increase yields further, and the highest experimental yields came when using a combination of these ‘ecological intensification’ practices with some additional nitrogen.

The lead author says these findings show that adopting some, or all, of these approaches could help reduce and rebalance worldwide fertiliser use, a global imperative given spiralling prices caused by the war in Ukraine.

Dr Chloe MacLaren, Rothamsted Research, said: “Reducing reliance on chemical fertilisers would help to buffer farmers and consumers against economic shocks, such as the current spike in fertiliser costs and consequent increase in food prices.

“Widespread uptake of these practices could also contribute to a more equitable global distribution of fertiliser. Currently, average nitrogen fertiliser rates in Africa are a small fraction of those in Europe, with smallholders in particular using much less than their fair share.

It is widely acknowledged that whilst the increased use of man-made fertiliser in the last 60 years has helped feed the rapidly expanding global population, it has not come without a cost - water pollution, climate change emissions, and biodiversity loss are all partly attributable to excessive fertiliser use.

Ecological intensification is where natural, environmentally benign processes that can benefit farming, such as those that enhance soil fertility or suppress weeds and disease, are actively encouraged by farmers.

“Ecological intensification could help return agriculture into a ‘safe operating space’ for humanity,” said Dr MacLaren. “Our results demonstrate that it could play an important role in the development of future sustainable farming systems.”

Looking at their results, Dr MacLaren and colleagues conclude these practices work in different ways to increase yields.

Growing legumes such as beans and clover add nitrogen to soil, which is important when fertiliser levels are low, whereas growing a greater range of crops over the year helps suppress weeds and diseases, which appeared to be increasingly important when higher rates of fertilisers were used.

Organic matter improves soil structure while also adding nitrogen, and manure was found to have a greater impact on yield than adding plant-based composts or cuttings, or leaving the remains of crops in place after harvesting.

According to Dr MacLaren, data from long-term experiments was key to demonstrating that the benefits of ecological intensification hold over long timescales, and across a wide range of contexts.

“Short-term experiments can produce spurious results if they take place in unusually good or bad years,” she said.

To overcome the challenges of comparing the data from all the individual experiments - that differ in their design and span a variety of crop and soil types, and climatic conditions - the team developed a new type of ‘meta-analysis’, an approach commonly used in medical research to combine data from different studies.

Andrew Mead, co-author and Rothamsted’s Head of Statistics and Data Science, said: “Our meta-analysis approach is unusual in that we have access to the raw data for each experiment. We chose to first analyse each experiment individually and extract information about the impact of different ‘additions’ to the cropping systems, before then combining the outputs in a series of meta-analyses, each with a focus on a particular type of addition.”

The team looked at farm experiments that have been running for longer than nine years from across Europe and Africa – totalling 30 separate experiments and data from over 25,000 harvests. The crops tested were wheat, maize, oats, barley, sugar beet or potatoes.

Each experiment investigated at least one of the three types of nature-friendly farming approach, so across the full dataset the researchers could assess the effect of different ecological intensification practices alongside different levels of nitrogen fertilisers and ploughing.

This meant the study could explore how multiple ecological intensification practices interact with each other and with nitrogen fertiliser inputs in their effects on yield, which had not been studied before.

The results also showed that a reduction in how much fields were ploughed did not strongly affect yields, although there are other economic and environmental factors that mean farmers may want to reduce their tillage efforts, says Dr MacLaren.

“Future assessments of ecological intensification should include a wider analysis of all social, economic and environmental factors, such as nutritional value or farm profitability. There are undoubtably benefits beyond just yield, such as reducing costs, reducing pollution, or providing other valuable farm products.

“Conversely, socioeconomic factors can also limit the adoption of such practices by farmers. These factors can include a lack of markets for these diverse products and limited access to necessary resources including land, seed, and manure. Upscaling these practices will require policymakers and society to create a more conducive socioeconomic context.”

These findings were made possible thanks to partners across Europe and Africa investing in their long-term experiments over decades to generate the data required, she added.

“Long-term experiments make vital contributions to global knowledge of sustainable agriculture by demonstrating how agriculture affects and responds to the environment over long time scales.”

The experiments in this study were brought together via the GLTEN (Global Long Term Agricultural Experiment Network), a network of over 200 long-term agricultural experiments and associated researchers spanning six continents and representing a range of climates, environments, crop systems and farming practices, that was established in 2018.

“We recommend that future long-term experiments place the development of functioning agroecosystems at the heart of their designs and then explore what level of man-made inputs are necessary to optimise the performance of these systems.

“Such experiments would assist our progress toward sustainable agriculture that meets human needs for food, fuel, and fibres.”