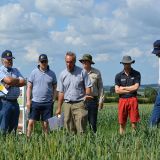 The project has been an outstanding success, showing that spring wheat can be reliably drilled on heavy land following a black-oat-based cover crop to achieve those goals, says Agrovista technical manager Chris Martin.

“However, the work is still throwing up many technical questions. Soil health is now a key driver at Project Lamport as well-structured soils are the basis for efficient farming and effective grassweed control.

“We are observing substantial physical and biological improvements in the soil and we are now starting to measure these to put some real science behind our recommendations.”

“On the heavy clay at Lamport we currently need both roots and tillage to get crops off to the best start. But how much of each do we need?”

In the damp autumn and wet winter of 2017/18, a shallow, low-disturbance post-harvest cultivation to 12.5cm combined with a black oat-based cover crop established soon afterwards resulted in much better spring wheat establishment compared with other treatments.

This season’s trials were established in drier conditions. Some plots were shallow-cultivated post-harvest to a few cm, others loosened to 12.5cm or 25cm with low disturbance legs, with and without discs.

Half of each plot was then sown with a black-oat/phacelia cover crop on 30 August, the other half left bare over winter. All plots were direct drilled with spring wheat on 21 March.

Loosening to 12.5cm with cover crop again appears to be the best option in terms of soil structure, crop appearance and blackgrass control, says Mr Wright. “The crop roots have improved the soil profile and cultivation has done enough to get roots well below leg depth. Looking at the other half without the cover crop, there is a distinct lack of tilth and porosity.

“The plot that was treated the same but cultivated to 25cm looks no better, but cost twice as much in diesel alone. Going deeper has not achieved anything.”

Yield will be judged and blackgrass levels assessed. “Eventually we will be able to advise on the best ways to move towards a low or no-till operation on heavy soils so that roots are doing most of the work for us.”

A three-year study at Project Lamport to collate and measure the benefits of good soil management is being undertaken by David Purdy, PhD candidate and John Deere’s East Anglia territory manager.

Mr Purdy is examining the impact of roots across a range of cover crop species, singly and in mixtures, with and without iron. Assessments include compaction, soil bulk density, visual assessment of soil structure, worm counts, mycorrhizal colonisations and organic matter levels.

Early findings are showing a gradual increase in earthworm numbers where tillage is reduced, particularly under cover crops.

“Judging by the initial findings we might expect to see some big differences over the next two to three years,” says Mr Purdy.

One of the most frequently asked questions by farmers visiting Project Lamport is how long they will have to use the cover crop/spring cereal sequence to control blackgrass before reintroducing winter wheat.

Latest results suggest even at Lamport, which has a background blackgrass population of 2000 plants/sq m, reverting to winter wheat is possible after a few years, provided it follows the right crop.

“Logic dictates that winter wheat should follow oilseed rape. But it’s a mess, despite direct-drilling the winter wheat at 375 seeds/sq m after a catch crop in early October and using comprehensive pre-and post-em herbicide programmes.

“By contrast, an adjacent winter wheat plot, identical in every way except that it followed spring oats, contained very little blackgrass.

“This suggests if you have high levels of background blackgrass you’d be better off going straight back into winter wheat after a spring cereal, or going into winter oilseed rape then following with a cover crop/spring cereal sequence before the winter wheat.

“What should happen after the winter wheat remains to be seen, but it is very likely that cover crop/spring cropping will still play a key role in the rotation.”

You can read this update from Agrovista on TFF's AGVendor...