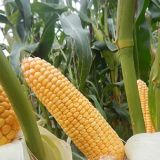 Maize is not the easiest crop to grow well in our temperate and unpredictable climate. But the popularity of this high-yielding crop has increased in recent times with advances in plant breeding supporting the needs of dairy farmers all over the UK. As you look ahead to this year’s growing season, Pioneer’s Andy Stainthorpe, shares his knowledge and expertise on how best to achieve a good crop.

What you want and what you can achieve are not always the same with maize simply because of the land you have available. Maize loves warmth so understanding how your land’s temperature is impacted by its location is a good starting point. Although temperature generally increases as we head south through the UK, fields on the Cornish coast at 200m and those at sea level are markedly different. And a sheltered valley at any height rather than a hilltop suits maize better. Soil type also affects its temperature, heavy soils remaining colder than lighter soils.

Growing maize under plastic produces a warmer micro-climate for your crop to flourish in protected from the conditions ‘outside’. It has a similar climatic effect to moving several hundred miles south or dropping from a higher to lower altitude. The increased cost can be worth the investment from being able to plant a slightly later-maturing variety offering a high yield.

Two primary goals with maize are to achieve good yield and the ability to harvest before autumnal weather increases the risk of a delayed harvest and problems such as post-harvest soil erosion. And, particularly for those farming in the north, it needs to be tolerant of the cold. Generally speaking, therefore, the further south you are, the more choices you have in terms of variety. But not surprisingly, 75% of maize currently grown in the UK is the cold-tolerant, earlier-maturing flint variety.

But this can come at the expense of starch degradability. Maize silage from flint varieties is harder for bacteria in the rumen to degrade, making the starch and therefore energy less available. In contrast, dent varieties offer more fermentable starch, providing more accessible energy to cows. In warmer climates than the UK, dent varieties can be grown extensively for their higher starch yield. But dent varieties don’t like the cold so a focus of Pioneer plant breeding for the UK grower has been to produce a cold-tolerant, early-flowering dent hybrid. Results are encouraging. Trial data over several years now shows strong reliability from the first of these new varieties, giving more UK dairy farmers the confidence to grow a maize silage with a high digestible starch content and good yield. It’s worth taking the time to weigh up the options before buying your seed or simply relying on what you’ve always used in the past.

With the increasing variety choice available to dairy farmers irrespective of location, the decision on which to grow largely depends on how you manage risk. Some traditional flint varieties are extremely reliable, cold tolerant and the fastest to mature, while also offering some degradable starch. So, on difficult land where early harvest is critical, you may decide the potential penalties of chasing a high yield by using anything other than a cold tolerant early flowering flint hybrid are too great. Where this is not the case, the newer dent hybrids which mature nearly as early and produce higher yields can provide a higher reward

Managing the factors you can control well helps overcome the limitations of those you can’t. Attention to detail is critical to its success. The majority of the important work with maize is done by the end of spring, so if your crop is looking good in late May/early June, you’ve given yourself the best chance of a good harvest.

This is the most likely step to be skipped but has a knock-on effect on everything you do subsequently so ignore at your peril. Maize needs a deep, loose seed bed, easier to achieve in lighter soils, but not impossible in heavier soil types. Ploughing heavier soils in winter can help tilth preparation through freeze thaw action but, in any soil, if the topsoil looks good, it’s also worth checking deeper down to be sure all is well before drilling. In some cases, sub soiling is necessary to address compaction lower down the soil profile.

Drill too early and you risk damage in poor weather; drill too late and the crop yield potential will be reduced. So do the best you can in the weather conditions around the normal planting window. Soils need to have reached a consistent 10C to ensure good early growth.

A consistent planting depth is important, ideally 5-8cm. Good consistency is helped by a good quality seed bed. If you’re using a contractor its worth consulting with them on the day to fine tune the right planting depth for the conditions

Maize is sensitive to weed competition so keep a close eye on weed growth – walk your crop often in the early stages. Many problems are caused by poor timeliness of herbicide applications. In just a few days, the crop can be impacted by fast growing weeds.

Another often overlooked factor is accurate fertiliser application. Start by analysing your soil – you can’t apply the right amount of fertiliser until you know what your soil needs.

All these factors require effort early on often well before planting but invest a little time and resource and you’ll be reaping the rewards come harvest time.

Every year, the Pioneer Accurate Crop Testing System (PACTS®) trials test the performance of maize hybrids in a variety of growing conditions. This year’s trials have once again shown encouraging results.

· P7326 is a particularly early-maturing and popular multi-purpose hybrid, and the quickest to reach 30% dry matter. It continues to produce consistently high yields on both favourable and less favourable sites where an early harvest is needed.

· The dent variety, P7034, bred specifically for cool maritime conditions, continues to do well. It has produced the highest starch content and has the highest rumen degradable starch when grown in the open across both favourable and less favourable sites*. P7034 is Pioneer’s only M3 classified hybrid, indicating the advantages of a dent starch type, high starch content and yield stability.

· The newer multi-purpose hybrid, P7948, has given high yields of quality forage suitable for livestock and biogas production, as well as high yields of grain when combined. *. It is suitable for favourable sites in the open, and also other sites when grown under film. PACTS Results have shown its yield potential is very high.

* sites are classified favourable or less favourable based the heat accumulation typically measured at that location.