The UK exported 52Kt of barley in November, down from 62Kt in October and the smallest monthly volume since July.

In November, shipments into the EU held steady compared to October but there were only very limited volumes into non-EU destinations. Haulage difficulties were partly behind the slower pace. Shipping to non-EU destinations requires much larger volumes than EU destinations due to the greater distance. The haulage issues make it challenging to move the required larger volumes to port in a timely fashion. Additionally, because of these issues there are reports that sellers do not wish to overcommit. 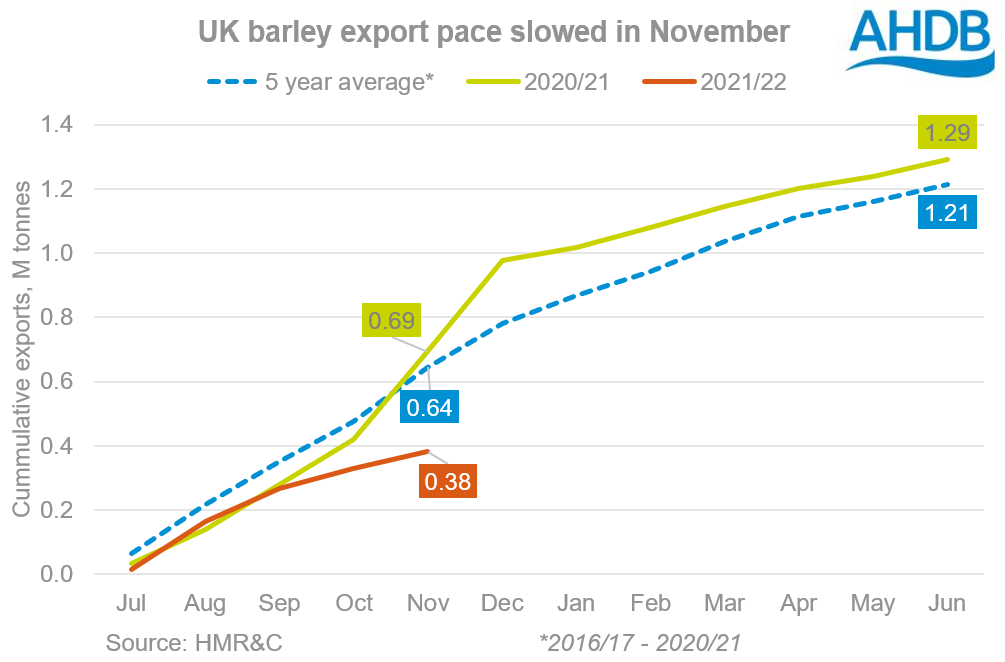 The season to date (Jul – Nov) total now stands at 382Kt, down 45% compared to 693Kt shipped in the first five months of last season. Back in November, AHDB estimated that the surplus available for export or free stock was 14% lower than 2020/21. If the export pace remains relatively sluggish, more barley will be available for domestic use or may be held in stocks at the end of the season.

AHDB releases its next estimates of UK supply and demand on 27 January. This will include the first forecasts of barley exports for 2021/22, and will be released several months earlier than usual following industry feedback.

Wheat imports also slowed again in November to 111Kt (including durum). This brings the season total (Jul-Nov) to 0.87Mt, down 24% from the same period last season. The Jul-Oct total was just 18% below last year.

The larger UK crop is generally performing well for milling purposes, both of which are reducing import requirements from last season. However, haulage difficulties still mean higher imports than might otherwise be required.

Meanwhile, maize imports accelerated. The UK imported 211Kt of maize in November, the largest volume since June. Despite this acceleration, imports for the first five months of the season stand at 0.72Mt, still down sharply on 2020/21 (1.22Mt). To reach AHDB’s current forecast for 2021/22 (made in November), we’d need to import around 200Kt per month in December – June.

In contrast, oat exports picked up in November to just over 6Kt from just over 3Kt in October. The season to date total now stands at 15Kt. Back in November, AHDB forecast total oats exports for the season (2021/22) at 55Kt, 34% more than last season. This was based on the data available at the time and industry views. To reach this target, we’d need to export an average of 5.7Kt per month from December – June.