What age Jerry? Any feeding? I’ve got hundreds of twins at 30-32kg born March but havnt checked late Feb borns, got some early Feb borns going Monday, lambs that were 35-38kg last week are 42-43 after 8 days

This reminds me of the “worming thread” I may not have had much rain recently but I also haven’t had a decent frost lasting over 24 hours since 2018
Last edited: May 6, 2021
M

harperfarmer said:
Decent trade today. Quite happy with that.

You stock always look super and if we kept sucklers it's what I would aim for. (We are Dairy). Have you any photos of your cows on here to look at?

Al R said:
What age Jerry? Any feeding? I’ve got hundreds of twins at 30-32kg born March but havnt checked late Feb borns, got some early Feb borns going Monday, lambs that were 35-38kg last week are 42-43 after 8 days

This reminds me of the “worming thread” I may not have had much rain recently but I also haven’t had a decent frost lasting over 24 hours since 2018
Click to expand...

that one was born 8th March. Single ewe lamb.

They’ve only just started to take creep but a mob of 300 lambs are only taking 35kg a day roughly.

Had cocci drench 2 weeks ago, nothing else yet.

Possibly. Got to look at the numbers to see if I can get a pen full of 38kg plus.

Prime Bulls (100) – Despite the dastardly despicable deadweight disputants reducing their price this week I can happily report that those selling live were again very well rewarded. A fantastic trade for all classes with those in attendance 38% Holstein Friesian, 15% native and still we returned a blinding average of 219ppk. Making their Thursday Darlington debut today were Messrs Reed and Hill of Riding Mill and it was certainly one to remember as they produced the top price per kilo with a wonderful double muscled British Blue weighing 694kg and selling for 272 pence. Frequent visitors to the top spot A & G Watson & Sons of Rushyford twice produced a luscious Limousin’s at 270ppk whilst a remarkable 12 others from seven different vendors sold at 260ppk and beyond. A super six in the £2000 plus club this week, every one a Limousin as a pair each for D Richardson & Co, Melsonby and L S Staley, Marwood were joined by G Carins & Partners of Black Callerton; winning the class today however was something special from the Longhirst herd of J E Jordon & Son as the Morpeth based firm’s 991kg 2 year old bull realised a magnificent £2437. On the whole less quality in the black and whites this week however plenty of life in the trade, tops went to expert feeders R Hall & Son, Kilton Hall at 204ppk and for the second week running J M Stuart & Son crossed the Pennines and impressed with their best Friesian selling for a tremendous £1483.
A G Watson & Sons, Rushyford sold 6 Bulls to average 260ppk and £1753
J A & M Boyes Ltd, Cleatlam sold 5 Bulls to average 260ppk and £1742
L S Staley, Marwood sold 2 Bulls to average 257ppk and £2088
C Harle & Sons, Brandon Village sold 4 Bulls to average 257ppk and £1861
Reed & Hill, Riding Mill sold 2 Bulls to average 254ppk and £1932
D Richardson & Co, Melsonby sold 4 Bulls to average 251ppk and £1959
J & A Moralee, Bardon Mill sold 3 Bulls to average 251ppk and £1811

New Season Lambs (135) – Once again the sheep trade remains buoyant, an extra account or two active this week at ringside certainly aided proceedings, those who phoned in this afternoon recieved a nice surprise as the spring lambs averaged a tremendous 356ppk, what’s more, as always in DFAM with our transparent and competitive ring they couldn’t wait to hear their weights. Top price this week went to the first draw of 2021 from J C Simpson, Hill Top East, Caldwell as he twice sold 44kg lambs to 413ppk and £182, the buyers being Roots Farm Shop, East Rounton and Yorkshire Halal. A fair proportion of pet lambs were included today, the better naturally reared lambs were all up and around 370 to 400 pence per kilo.

Prime Hoggs (899) – For the hogg producers still selling their patience is both admirable and well rewarded, another incredible display containing every creed and colour known to man, given that the bag of dolly mixtures presented the SQQ today of 297ppk was extraordinary with trade considerably dearer on the week. Top of the sale a magical £200 for a wonderful single Texel from J & F Hartley & Sons, Low Shipley Farm; close behind naturally was the super consistent A C Simpson & Son of Witton-le-Wear as today’s run of 70 heavyweight Suffolk’s averaged 61kg and £178.94. Leading the prices per kilo was G E Raw of Toft Hill Hall as they produced a sublime Beltex hogg which reached £175 and 350ppk. Any amount of the better bred and better fed sheep in the 330ppk to 340ppk bracket today, horned hoggs sold to a top of £143 from J H & D Wise, Newton Aycliffe with a pen of well finished Scotch Blackface.

Prime Pigs (14) – Tom Tom the Pipers son, stole a pig and away did run – sorry Tom but on today’s trade no thefts were witnessed, the pork continues to rally.

livestock 1 said:
Just shows the difference in farm types we all have. Ground was frozen here at 4am we are 3/4 way through lambing and it’s been snowing most of the afternoon.
A year later we are selling hoggs around 40 kilos!
Click to expand...

Flip side of the coin is I need lambs away ASAP.

In a “normal “ year my peak grass growth is April /May. If it gets dry my grass disappears rapidly.
L

Flip side of the coin is I need lambs away ASAP.

In a “normal “ year my peak grass growth is April /May. If it gets dry my grass disappears rapidly.
Click to expand...

Yes agreed. I need something to disappear though!!
My grass disappeared in September and forgot to come back!!
L 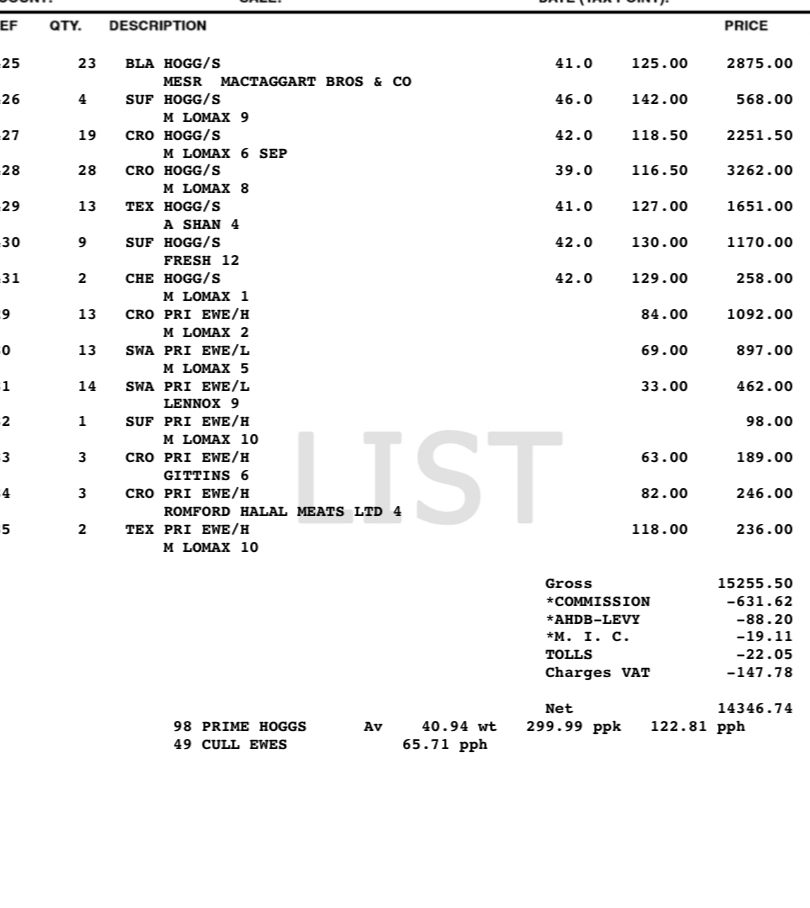 J 1177 said:
the bags of bones which were cursed during lambing really are redeeming themselves at the death.
Click to expand...

That’s a hell of a quote!

Electricfencer said:
Didn’t quite get £3/kg!
Click to expand...

That’s exactly what I thought too!!
J

Happy?? I haven’t heard of any flags or fireworks going up at @livestock1 towers!? Them scrag ewes best off gone I bet?

JSmith said:
Happy?? I haven’t heard of any flags or fireworks going up at @livestock1 towers!? Them scrag ewes best off gone I bet?
Click to expand...

Better than a knacker bill twenty up .
J

The price paints a picture in my mind

better than paying to get rid of it though!! Must of been a braver man than me to put that in the mart an I’m always up for slipping one past’m

That what we all said. I’m not sure if it will ever make it or if it does any will be able to find 4kg of meat on it!

Hilly said:
Better than a knacker bill twenty up .
Click to expand...

You must log in or register to reply here.