Michelin is offering farmers and contractors up to £600 cashback when they purchase a set of four Michelin agricultural tyres, or up to £250 when two tyres are purchased, as part of its popular harvest promotion, which runs from August 1 to October 31.

In addition to the cashback savings, Michelin agricultural tyres – such as the TrailXBib, CereXBib2 and AxioBib2 – benefit from Ultraflex Technology, allowing them to operate at much lower pressure than a standard agricultural tyre, reducing the impact on the soil they are working on. A recent in-depth study into the impact of traffic and tillage on soil compaction found agricultural machinery running Ultraflex Technology tyres could boost farmers’ yields by four per cent. 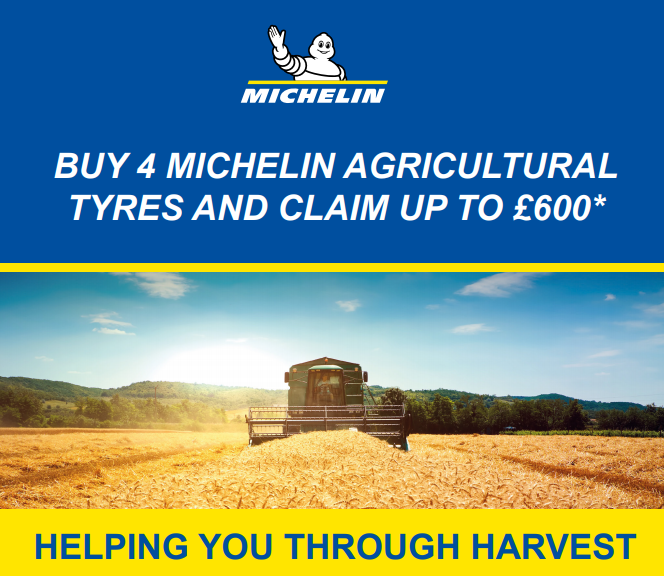 “We want as many farmers to be able to access these products as possible, and our campaigns and promotions play an important part in this – providing a great opportunity for those who may usually opt for a budget or mid-range tyre to get their hands on these premium fitments.”

Harper Adams University – a specialist provider of higher education for the agricultural and rural sector – conducted the study on the impact of using Ultraflex tyres at its campus in Newport and another site in the USA, in conjunction with the University of Illinois. Using two 290 hp tractors in each site, one with Michelin Ultraflex Technology low pressure tyres and one with standard pressure tyres running in two fields, the university tracked the results over three years in Illinois and nine years in Newport.

“The results we saw in Illinois showed quite clearly that Michelin Ultraflex Technology tyres can help farmers to significantly reduce compaction and, in the process, boost their yields by four per cent in comparison to standard tyres,” says Paula Misiewicz PhD AMIAgrE, Senior Lecturer in Soil and Water Management, Harper Adams University.

“While there were some benefits of using low pressure Ultraflex Technology tyres in all three systems over the nine years, it was with the deep tillage techniques where it really stood out. Here again we recorded around a four per cent yield improvement in comparison to conventional farm tyres,” says Misiewicz.

Prof. Richard Godwin, Visiting Professor, Harper Adams University, says: “Whilst that improvement might seem small, when you think of it globally, it goes a very long way to help feed the world. Many people are worried about the sustainability of the human race, and if we could get these results for many different crops, it would make a huge impact in sustainability.”

The study also found that any increase in the initial outlay for farmers purchasing Michelin Ultraflex Technology tyres over a standard tyre would be paid off within 12 months.

“Our analysis found that the payback period is about a year. And so effectively, once you have paid for your tyres in year one, you’ve recovered your investment, and typically farmers would be running those tyres for another five years or more,” adds Godwin.

And with the harvest campaign offer, the financial rewards of choosing Michelin tyres for your agricultural machinery are even greater.

For the full details of the promotion and to make your claim, please visit - https://agri-offers.michelin.co.uk/

*Reward will be paid in the form of a BACS transfer. Participating Exelagri dealers only. Minimum purchase of two MICHELIN agricultural tyres. Tyres must be purchased in one transaction. Valid on purchases from 1st August to 31st October 2021. Terms and conditions apply.
Click to expand...