Dihydrogen Monoxide or DHMO has been used for years to improve the distribution and performance of soil acting residual herbicides along with other uses such as a solvent, coolant, and used extensively as a fire retardant. It is critical for life, but deadly if too much is imbibed. You’ve probably heard of DHMO by its more common name – water.

The slightly flippant tone of the opening paragraph belies a message of real importance when it comes to simple and practical advice on the use of soil residual chemistry. The real message is if you want greater efficacy from your herbicide spend, use more water.

This year has seen, in many areas, a massive seed return from the common grassweeds, brome, blackgrass, ryegrass etc. The last two autumns have also proved to be very tricky for crop establishment, both of which may combine into the perfect storm of earlier drilling and large seed banks ready to germinate.

Trial work (by Agrovista) reveals that pre-em herbicide efficacy can be improved by the addition of more water. At 100l/ha a programme (see graph below) using DFF/FFT/PDM mix achieved just 50% control of blackgrass, But the same programme with 300l/ha water achieved over 90% control. Can you afford to ignore this evidence?

Of course, it’s not quite that straightforward. The above trial was conducted using twin flan fan nozzles (forward and back), none of those expensive air induction or ‘product’ type nozzles. Spray pattern was fine, 3 bar pressure and a moderately low forward speed of 10km/h, (trial results below). 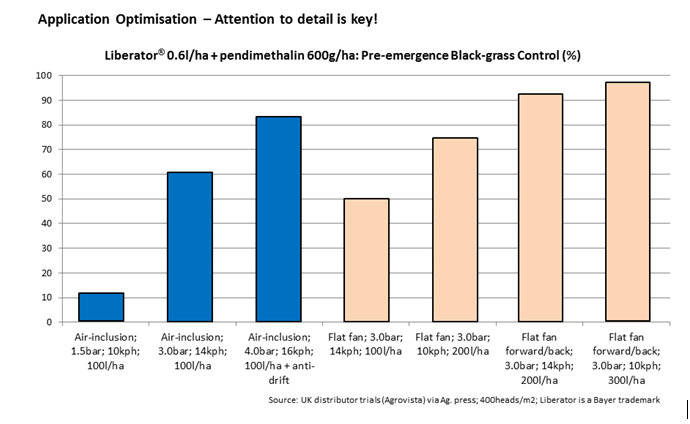 Just to be clear the graph above is showing that to achieve above 95% control of blackgrass use 300 litres of water, with forward & backward facing flat fans nozzles at a forward speed of 10 kph. Research by Stephen Moss et al has shown that in most situations a minimum of 95% control is required to reduce seed return.

Those of you who are BASE – UK members also have the privilege of being able to watch Chris Martin’s excellent presentation of the correct choice of sprayer nozzle for different situations.

Those who are following a Conservation Agriculture strategy will hopefully have resisted the urge to do a little light surface cultivation and will now have all the weed seed on the surface. Excepting the fact that there will always be a little seed which germinates from depth, a legacy of historical cultivation. With the seed on the surface it is now in better place to be controlled with actives such as flufenacet (FFT) and pendimethalin (PDM). These two key actives provide the backbone of many pre-emergence herbicide stacks and are probably the most cost effective too. They are primarily taken up by the roots of the germinating grass weeds. Therefore the roots of the blackgrass plants have to come into contact with the herbicide to be taken up and be effective. If the weed seed is emerging from depth the germinating seed roots are very unlikely to encounter the active ingredient and can happily push its cotyledon through the layer of herbicide on the soil surface without harm.