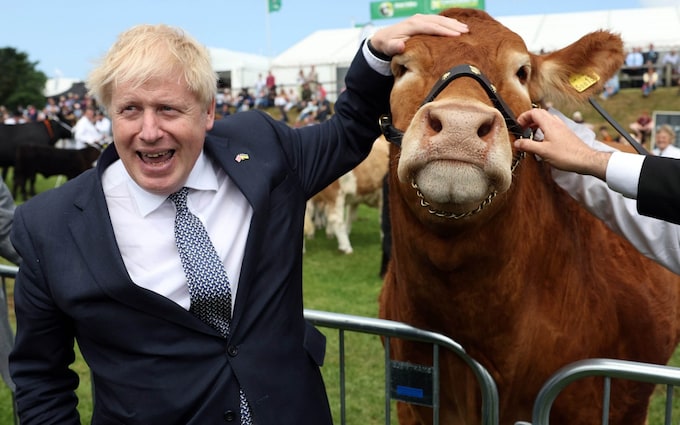 Boris Johnson gets in touch with the locals at the Royal Cornwall Show on Friday CREDIT: Parsons Media
Boris Johnson is set to unveil a “grow for Britain” strategy and tell farmers to produce more fruit and veg, in the wake of record inflation.
In a major announcement expected on Monday, the Prime Minister is poised to unveil the country's first food strategy for 75 years.
It is set to call for changes to planning rules to make it easier to convert land into farms, announce that poultry workers will be eligible for seasonal migrant visas, and propose that schools, prisons and hospitals be required to offer a vegan option.
The plans were delayed following Russia’s invasion of Ukraine, in order to put more emphasis on food security.
It comes amid a spiralling cost of living crisis, with inflation set to surpass 10 per cent this year, according to Bank of England figures.
Andrew Bailey, the Bank of England governor, has already warned of “apocalyptic” food prices and interest rates are set to rise again to 1.25 per cent.
Mr Johnson made his first visit to Tiverton and Honiton in Devon on Friday, one of two seats facing by-elections later this month. The cost of living is expected to be a key factor in the vote.
The Prime Minister and Rishi Sunak, the Chancellor, were set to make a joint economic speech next week, but it has now been delayed.
Both are under pressure from senior Conservatives to do more to ease the cost of living, with Cabinet ministers understood to be backing calls to cut fuel duty further.
Amid attempts to reset his premiership in the wake of the confidence vote, Mr Johnson will also propose a major Brexit Bill in Parliament on Monday, allowing the Government to override parts of the Northern Ireland Protocol.
Later in the day, he will make a speech on technology and innovation and its contribution to economic growth.


'Cost of food has real consequences'​

The food strategy, which has been leaked to The Telegraph, will say farmers need to be more productive and that planning rules should be relaxed to make it easier to convert land into farms to grow fruit and vegetables.
It will be announced during a joint visit by Mr Johnson and George Eustice, the Environment Secretary, to the south-west of England.
The strategy document seen by The Telegraph states that “the cost of food has real consequences for people across the country” and that ministers are working “to address poverty in the round as we learn to live with recent events and manage the impact of cost of living pressures”.
It added: “The strategy comes at a time of significant increases in food prices, largely as a result of energy prices and exacerbated by events in Ukraine, which is very challenging for people across the country.
“We are engaging closely with the food industry to understand price impacts and any mitigating measures.” 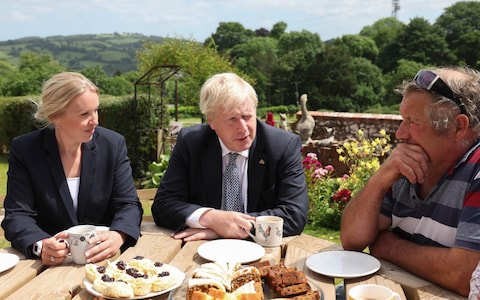 Boris Johnson visits Ditchetts Farm in Tiverton, Devon, with Helen Hurford, the Conservative candidate for the upcoming by-election CREDIT: Andrew Parsons
The document points out that currently, 57 per cent of British produce comes from 33 per cent of agricultural land – showing that farms could be more productive.
The strategy is also expected to contain plans to solve the migrant worker shortage, including by giving new seasonal worker visas to poultry workers on British turkey farms and replacing fruit pickers from eastern Europe with robots.
Even though Britain’s climate would previously have prevented the growing of many crops, farmers now use “a new generation of sustainable and efficient greenhouses” which “provides opportunities to reduce our reliance on overseas production”, the strategy is to say.
The UK imports more than half of the mushrooms it eats, compared with one-fifth in 1990, and 70 per cent of its raspberries – up from 0.3 per cent.
UK production of fresh fruit
Britain has seen little direct impact on its food supply since Russia’s invasion, since it is a major grower of wheat, Ukraine’s major food export.
Origin of UK's consumed food
But the rising costs of fuel and fertiliser on global markets has made food production more expensive, pushing higher prices on to customers.
Last month, a study by consumer champion Which? found that the prices of nearly 300 groceries had risen by more than a fifth over the past two years.
Monday’s strategy will announce a “focus on pioneering more organic-based fertilisers” that are less reliant on global supply chains.
But the strategy will not announce any immediate support for households, focusing instead on “longer-term measures to support a resilient, healthier and more sustainable food system”.
Government sources pointed to the £15 billion support package announced last month by the Chancellor, which was largely focused on energy bills, as evidence of what the Government has done to help alleviate the immediate cost of living crisis.
Plans to require schools, hospitals and prisons to buy more locally sourced food are also under consideration, while pubs and restaurants may be forced to declare any meat that comes from factory farms on their menus.
On Friday, Number 10 sources said the measures were part of a series of announcements on the cost of living in the coming weeks, including the delayed “growth plan”, now set to be revealed early next month.
“Everything we do now is forced to go through the lens of what it does for economic growth and easing the burden on British families,” a source said. “It’s going to be in everything we do.”

I hope Boris realises not be much extra production this year from any plan he has announcing it in mid June!

Half Pipe said:
I hope Boris realises not be much extra production this year from any plan he has announcing it in mid June!

Top fruit has a three year plus lead in...

Half Pipe said:
I hope Boris realises not be much extra production this year from any plan he has announcing it in mid June!

Veg area reduced by 22% across the country.

Devil's advocate said:
Veg area reduced by 22% across the country.

Tarw Coch said:
If I wasn’t a farmer and didn’t know who Borris Johnston is that would sound impressive
Click to expand...

I think that's all the government are interested in - press releases that make it sound like they are doing something, which in reality mean very little.

I'm incredibly curious how they are going to make "changes to planning rules to make it easier to convert land into farms".

Where are they going to find this spare land that currently isn't being used as farms?

Because they are mainly imported ?

bobk said:
Because they are mainly imported ?
Click to expand...

Returns back to veg crops have declined in real terms for past 30 years, and wheat is now worth +£300 per ton - why would you grow veg crops ?
W

Steevo said:
I'm incredibly curious how they are going to make "changes to planning rules to make it easier to convert land into farms".

Where are they going to find this spare land that currently isn't being used as farms?
Click to expand...

What it actually means is they want to make it easier to get planning for acres and acres of polytunnels. Its like people who think food is made in the backroom of supermarkets have thought these plans out, they are laughable
T

I see PM Carrie has included the caveat that schools,prisons and hospitals must be offered a vegan option.
W

texelburger said:
I see PM Carrie has included the caveat that schools,prisons and hospitals must be offered a vegan option.
Click to expand...

I think at 1000ft plus on scottish hill farm i might try and stick to cows and yows , lettuce and cabbage might be problematic in 1” of stoney soil .

Meanwhile pigs are nearly given away.....

On the one hand farms are being told that we have to be more productive, and on the other, there will be active discrimination against 'factory farmed' meat. Fair enough if you want to argue against intensive farms, but they are certainly more productive. That's why they've been developed.

At least we can have confidence that this government won't be in place to see this lunacy through.
H

"Urging" someone to do something is an interesting idea.

Humble Village Farmer said:
"Urging" someone to do something is an interesting idea.