Calls to label meat products with information about animal welfare at slaughter must not be hijacked by prejudice, according to the British Veterinary Association, which has been campaigning for an end to non-stun slaughter.

On the day that MPs debate an amendment to the Consumer Rights Bill calling for compulsory labelling of halal and kosher food, the President of the BVA has written to the three main party leaders asking them to support its call for food labelling to state whether the animal has been stunned in line with welfare legislation or not stunned under the legal derogation.

Recent media coverage about restaurants and supermarkets using and selling meat from halal and kosher slaughter has raised awareness of the issue of welfare at slaughter, but an enormous amount of confusion remains over how consumers can make an informed choice.

In the letters to David Cameron, Nick Clegg and Ed Miliband, BVA explains that labelling all halal and kosher products will do nothing to inform the public about the very proper concerns regarding welfare at slaughter but could fuel further confusion and potentially feed prejudice.

Halal labelling does not recognise that around 88% of halal slaughter in the UK is prestunned. At the same time the 12% that isn’t stunned, along with the hindquarters of animals slaughtered by the shechita method that are not kosher, could continue to enter the mainstream food chain unlabelled.

“It is very disappointing that so much confusion remains over the issue of labelling. Calls for products to be labelled as halal or kosher will do nothing to help consumers who want to make a pro-animal welfare choice, but could fuel prejudice.

“The answer is very simple. Food should be labelled as stunned or non-stunned – a measure that was also supported by the European Parliament in June 2010.

“This important animal welfare issue must not be hijacked by other agendas. We need all three parties to take a lead on this issue to promote better consumer information and better animal welfare.”

Goods to be as described: meat products

NC13
To move the following Clause:—
‘(1) All products containing halal and kosher meat shall be labelled as such at the
point of sale by retail and food outlets.
(2) A food outlet is anywhere where food is sold to the public.’

2. BVA’s campaign to end non-stun slaughter includes a government epetition which reached 50,000 signatures within two weeks of being launched

By Oli Haenlein
David Cameron does not support the compulsory labelling of halal meat products, according to a statement from Downing Street. 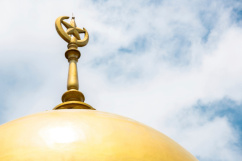 After media reports that ritually-slaughtered meat, notably New Zealand lamb, is being sold in supermarkets unbeknown to consumers, there have been calls for more labelling to reflect its method of slaughter.

However Downing Street said that David Cameron did not support this. A spokesperson from the Prime Minister’s press office said: “The greater the transparency the better and we think we can achieve this transparency without necessarily having a full-on national food labelling scheme.

“Instead we believe this will be dealt with by restaurants and businesses. We think a lot of businesses and restaurants will probably change their practices and change their labelling. We will review the situation in a few months’ time.”

The statement follows a letter written to the Telegraph by faith leaders Henry Grunwald, chairman of Shechita UK, and Dr Shuja Shafi, deputy secretary general of Muslim Council of Britain, calling for labelling to be clearer: “Comprehensive labelling should be supported by faith communities and animal welfare groups alike. It would offer all consumers genuine choice, whether they are motivated by animal welfare, religious observance, or even intolerance of anyone who looks or worships differently to them.”

Elsewhere, Philip Davies, Conservative MP for Shipley, said that he had pushed for compulsory labelling of kosher and halal meat two years ago, but the bill he tried to introduce was defeated. “As usual I was ahead of my time because you will appreciate there is widespread concern about the use of halal and kosher meat that is not labelled amongst retailers,” he said.

Deputy Prime Minister Nick Clegg also said there should be more information on meat packaging. Speaking on LBC radio he told listeners that telling customers if meat is halal or not would be “relatively straightforward”.

​
Once again halal production is dominating the headlines of the tabloid press, and once again, it’s a case of not letting the facts stand in the way of a good story.
The fact the story comes around almost every year, with the same predictable headlines, is also ignored. People have the attention spans of goldfish, after all, and once again, the meat industry has to watch in disbelief as, before you can utter the words “islamophobia” the predictable headlines whip up a frenzy of outrageous idiocy.

So, let’s set the record straight. Is there unlabelled halal meat on the supermarket shelves? Yes there is. Is this a reason to be concerned? No, unless you feel that the utterance of a prayer at the point of slaughter is likely to infect you with some kind of unwanted religious fervour. After all, little Susan loves her burgers, but heaven forbid it might lead to her donning a burkha.

The outrage and hysteria over the issue is being manipulated and whipped up for reasons other than animal welfare or food safety.

The fact that the vast majority of halal production is pre-stunned before slaughter is brushed aside in favour of focusing on the tiny minority that isn’t. And that tiny minority is not on the supermarket shelves in the form of New Zealand lamb.

Those looking to whip up that frenzy need to look to their own consciences.

Non-stun is a separate issue in this debate, and one that is a serious issue for the meat industry to tackle. Those who promote it claim it is humane and it is their religious right to slaughter an animal without stunning.

Whether you agree with that or not, insisting that the meat coming in from New Zealand be labelled halal is going to have no impact on the issue of non-stun slaughter.

If we’re going to label a product, labelling its method of slaughter, as argued for by the British Veterinary Association, is a more sensible route to allow consumers to make an informed and sensible choice.

But, unfortunately, the words informed and sensible are not usually what sells copies of the Daily Mail.
Get FREE News E-Alerts
- See more at:
Last edited: May 14, 2014

Apparently this labeling is another EU competence and apart from huff and puff, there is little 'we' can do until their decision is made....

123: The Transition to Responsibly Sourced Growing Media in UK Horticulture

123: The Transition to Responsibly Sourced Growing Media in UK Horticulture

They chart the history of the move to peat-free growing media, the...
News
Continue…
Top