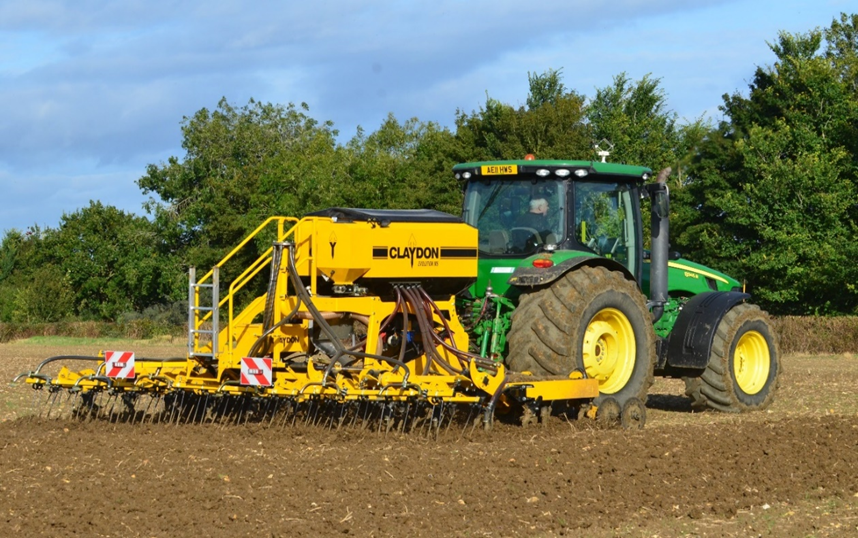 
​
Despite a stop-start harvest and the very changeable weather which followed, Suffolk farmer Jeff Claydon was able to establish all the planned area of winter crops. But, he says, this autumn highlighted the necessity of having a flexible approach and the ability to utilise windows in the weather.

Harvest was a stop-start affair this year. After a marathon run with the combine early on, we were ahead of schedule until 15 August, but then had eight days with measurable rain.

They say that every cloud has a silver lining and the interruption to harvesting allowed us to immediately start drilling DK Excited oilseed rape at just 2.7kg/ha directly into chopped straw and stubble with our new Claydon Evolution drill (to be launched at LAMMA 2022). We drilled all our oilseed rape in excellent conditions on 16 / 17 August, the first cotyledons appeared five days later and 4kg/ha of Ironmax® Pro (De Sangosse) slug pellets went on to sort out any slugs that were present because of the moist conditions.

The damp weather and slightly cooler temperatures resulted in excellent establishment and fortunately the dreaded cabbage stem flea beetle did not appear. Centurion® Max was applied to control annual grass weeds and we have been pleased with how the oilseed rape has grown away. As I write this the soil temperature is still 10.5°C, well above average for the time of year, and with the crop growing strongly conditions are too warm for the Kerb® to go on.

Conditions were not dry enough to fire up the combine again and begin harvesting the remaining area until the first week of September. In the interim, the prolonged spell of wet weather caused our spring oats to go flat so we were unable to accurately assess yields and draw firm conclusions from the various cover crop treatment plots on that area. However, a visual assessment suggested only minor differences between them.

Moist soil conditions provided ideal conditions for slugs, which will undoubtedly have been a problem on some farms this season, underlining the importance of a robust approach to stubble management. Dealing with slugs and slug eggs effectively is key to success, especially where winter wheat follows oilseed rape, so after harvest I regularly check fields when the soil is damp. Clearing away crop residues that have remained undisturbed for days will reveal slugs and slug eggs, allowing appropriate measures to be taken.

In the early days of developing Claydon Opti-Till® we sometimes had problems with slugs where stubble management was not used, so it has been a cornerstone of post-harvest operations on the Claydon farm ever since. We do not want to rely on slug pellets, so the aim is to take out as many slugs and slug eggs as possible using cultural and mechanical methods, such as the Straw Harrow.

The late finish to harvest meant that we had only four weeks before starting to drill winter cereals, so a cover crop would not have had time to develop fully or justified the cost. We could have used this technique on land destined for spring oats but the glyphosate which went on at the end of October made such an excellent job of killing weeds and volunteers that there was little point. The more resilient seeds which germinate over the winter will be taken out with a second application of glyphosate before drilling the spring oats.

The performance of the winter wheat which followed oilseed rape confirms that our approach to stubble management works well: even the headlands are perfect! Everything was drilled by mid-October, helped by the fact that Claydon Opti-Till® enables us to establish crops in 20% of the time, at a fraction of the cost and using 10% of the fuel, less than 15 l/ha, than would be required with a conventional plough-based system. Such high productivity counts for a lot when the weather is catchy, the window of opportunity is limited, and the number of drilling days are far fewer than in a more protracted season.

This autumn was unusual and with rarely more than three or four consecutive dry days the soil was always moist. In October, for example, we had 48mm of rain in just two days. Although that was a great benefit in helping the pre- and post-emergence chemicals do their job, the moist soil stuck to the tractor’s tyres, and it was virtually impossible to Cambridge roll after drilling as we normally would.

Instead, we ran our Claydon Straw Harrow at a diagonal to the direction of drilling and found that it did a much better job than rolling under poor conditions, which would have squeezed the air out of our heavy clay soils and created wheel marks in the crop. The Straw Harrow has delivered exceptional results and the crop has established better in the high-humidity seedbed than if it had been rolled.

I am pleased to report that we now have some exceptional crops, which were established on time, according to plan and with very few issues, despite the challenging weather. The variable conditions underlined the importance of responding to what nature throws at us and adapting the crop establishment techniques accordingly, rather than sticking rigidly to a set formula. Having developed Claydon Opti-Till® we know every nuance of how it should be used, but existing Claydon users or prospective owners who require any guidance should contact our team who will be pleased to offer advice.

Earlier, I mentioned headland establishment. The performance of these often-overlooked areas is fundamental to achieving high average yields because even on a relatively large arable farm they can easily account for 25%-30% of the total field area. It is easy to become complacent when the display on the combine’s yield meter shows 10t/ha-plus in the middle of the field, but rarely does that reflect the true field average.

On the Claydon farm the 2020 harvest underlined the importance of getting the headlands right, in terms of ensuring adequate drainage and eliminating wet spots, minimising compaction, ensuring good crop establishment, and reducing pest damage around field boundaries. For some, or all, of those reasons, in 2020 some of our headlands underperformed the main field areas by 30%-40%, which had a significant detrimental impact on average yields. Even in that difficult season we still averaged 9t/ha of winter wheat, but what could it have been if all those areas had performed to their full potential? Having remedied any faults, we hope to have an answer to that question next harvest.

The combination of warmth and moisture in the weeks following harvest meant that the worm population went into overdrive, taking down almost all crop residues in a matter of weeks, helping to unlock valuable nutrients for the growing crops which will hopefully help to keep input costs under control given where nitrogen prices are currently.

Because of conditions this autumn some farms struggled to get crops in the ground, and they have been slower to develop. The spring will bring the dilemma of how much nitrogen to apply and whether to cut back on other inputs, because there is no point in throwing money at a crop with limited potential. However, crops that have established well are worth nurturing and developing their full potential will pay off.

It is too early to calculate exactly final average yields from the 2021 harvest as all our spring oats and most of the wheat is still in our grain store. However, indications are that the wheat averaged 9t/ha and is selling for £170 - £250/t generating excellent returns, while the spring oats did 7t/ha. The oilseed rape came in at 3.3t/ha and all of it has left the farm at £500-£600/t.

My accountant has just informed me that the farming operation has made a profit again this year, even before taking support payments into account, so that is exceptionally good news. Higher prices for what we produce will partly offset much higher input prices, but it will be important to keep a close eye on the balance between the cost of inputs and their potential benefits.

The wall-to-wall coverage of the COP26 event in Glasgow over the last couple of weeks underlined that the focus on reducing emissions will only increase and as farmers we must find ways of reducing our carbon footprint. In conjunction with Yara, Claydon have been studying the relative efficiency of establishing crops using Claydon Opti-Till® against conventional techniques. Early indications are that the Claydon System retains around 30% more carbon in the soil, so we are off to a good start, but we will be investigating this in more detail in the coming year. 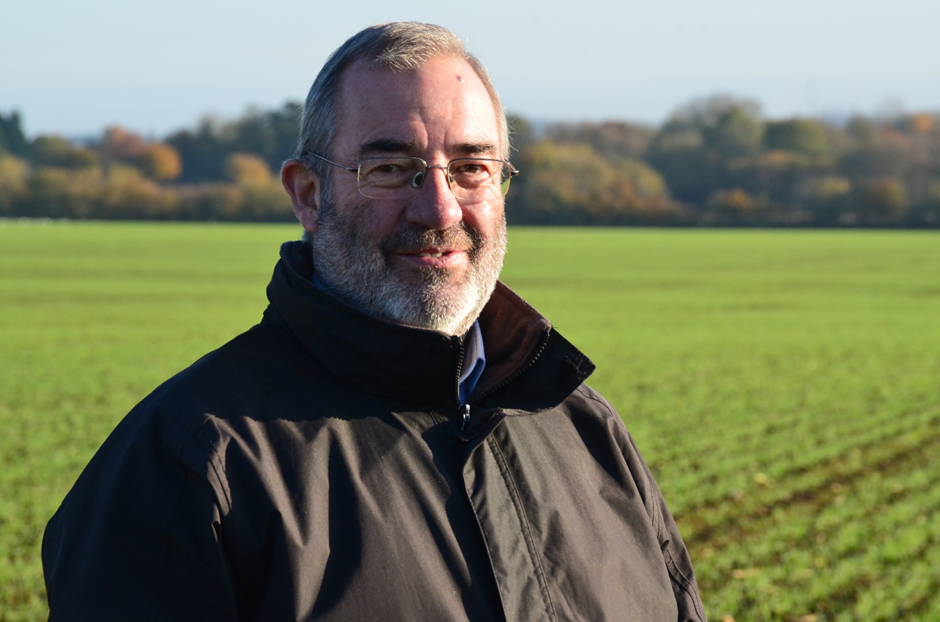 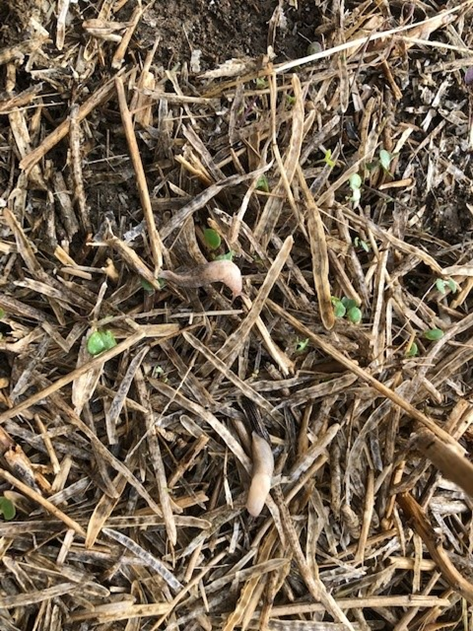 If you clear away residue that has not been moved for several days slugs and slug eggs will be evident. 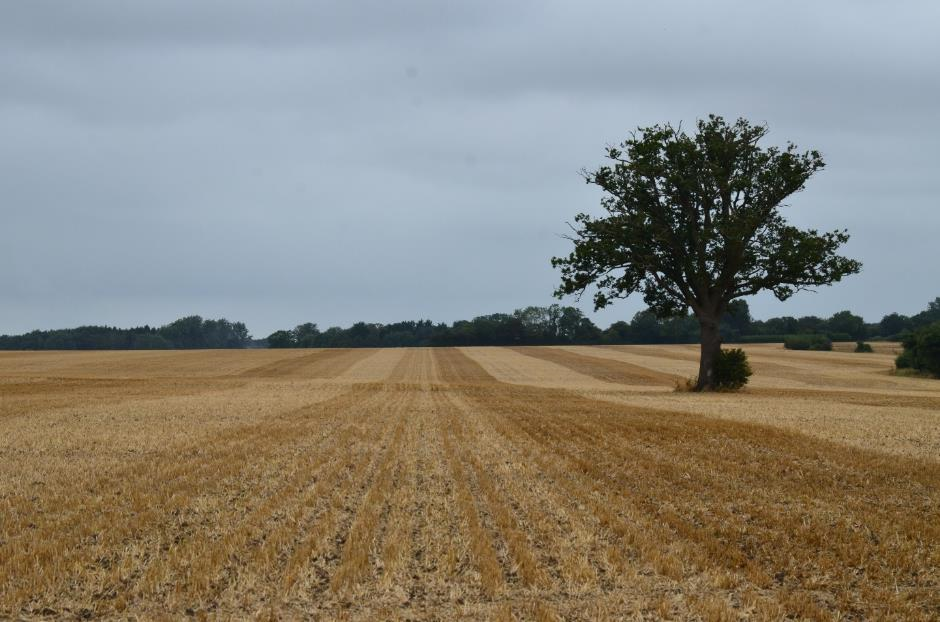 Oilseed rape was drilled direct into this wheat stubble with a 6m Claydon drill. The photograph below shows the crop on 17 November, looking well established, very even and with lots of promise. 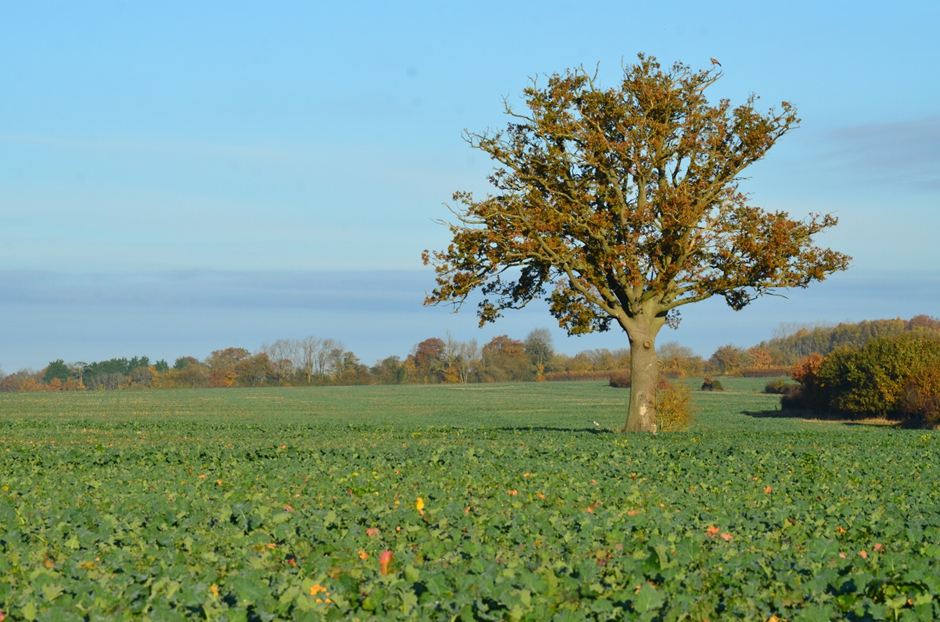 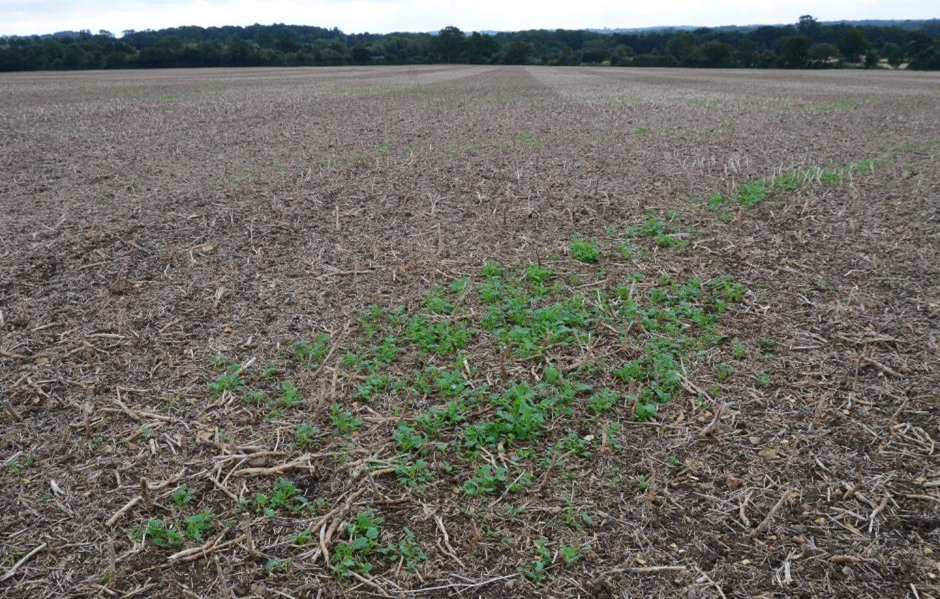 This field received one pass with the farm’s Claydon Straw Harrow immediately behind the combine to encourage weeds and volunteers to grow, then a second to take them out. Some small plants were still evident when this photograph was taken on 25 August. 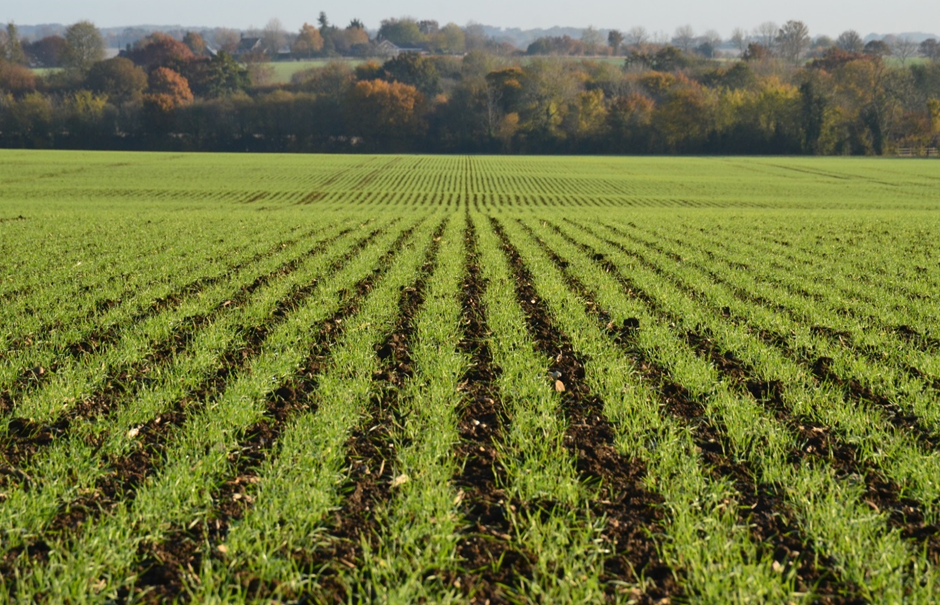 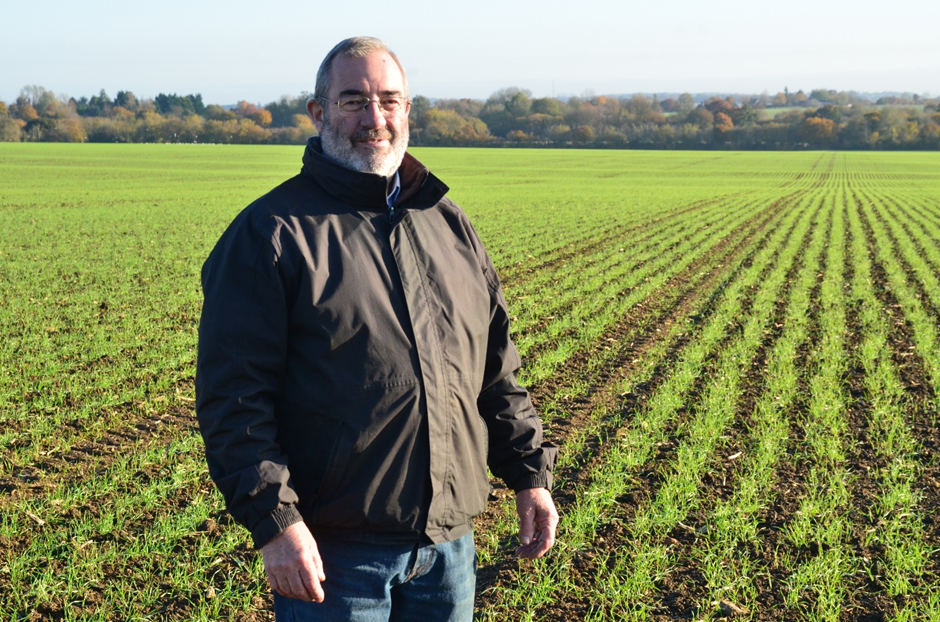 Soils on the farm are so supportive after 20 years of using Claydon Opti-Till® that even following heavy rain the tramlines just behind Jeff Claydon are barely visible despite the farm’s 5000-litre Challenger self-propelled sprayer having just run through the crop. 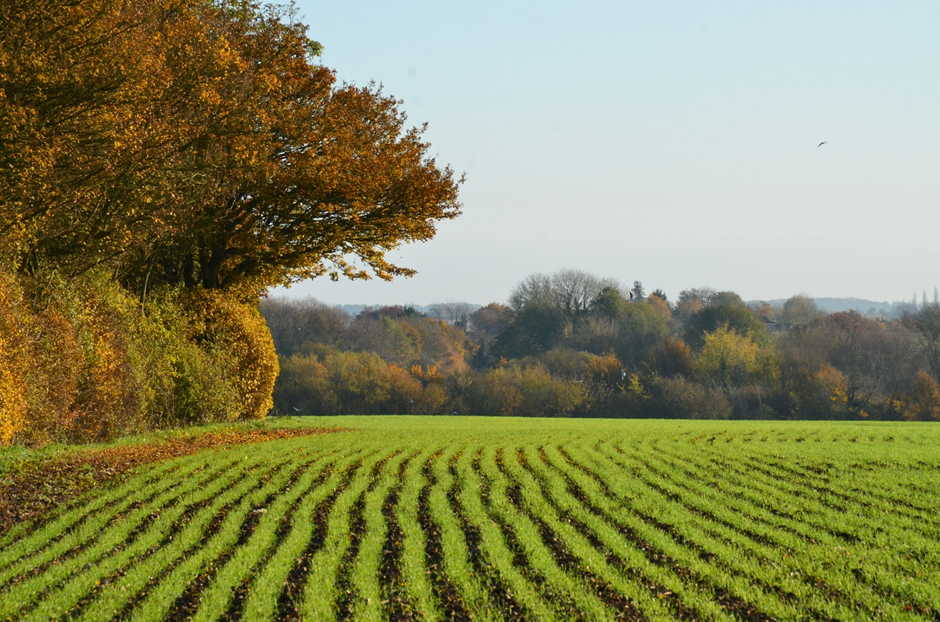 Maintaining yield on headlands is a priority as these areas can dramatically affect average yields. 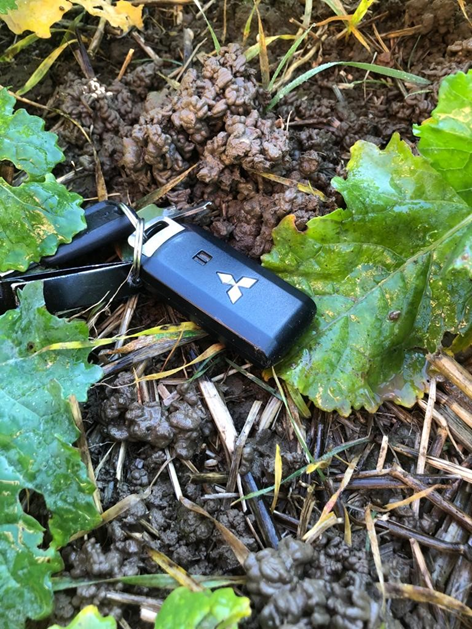 A plethora of casts in this crop of oilseed rape highlight the elevated level of worm activity. 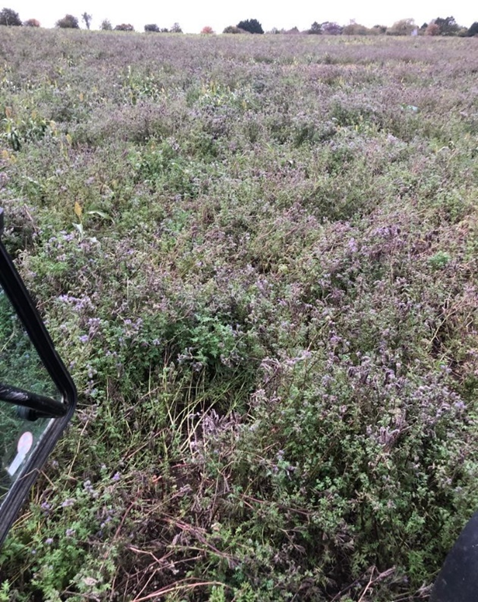 A neighbour asked Jeff Claydon to drill winter wheat directly into this particularly challenging multi-mix cover crop drilled during the summer in a field that had laid fallow since the spring. After a vigorous one-pass stubble management operation Jeff’s brother, Frank, with the new 6m Evolution drill, seeded LG Skyscraper winter wheat at 250kg/ha. The resulting crop can be seen below. A 4.8m Evolution drill will make its first appearance at LAMMA 2022. 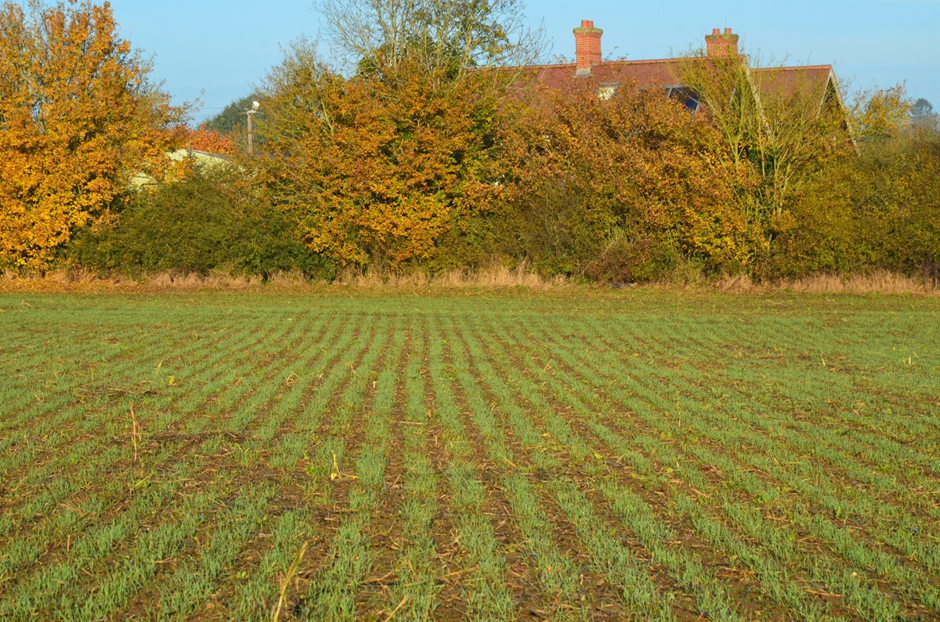