Whenever we talk about bullish markets, China is often at the epicentre of discussion.

This marketing year (2021/22) China are expected to continue to import large amounts of agricultural commodities. With 26Mt of maize and 101Mt of soyabeans, expected to be imported (USDA).

However, in the August WASDE it was anticipated that Chinese consumption would start to be revised down. This is due to hog producing & soy crush margins in China not being as favourable. As yet, these downward revisions have not occurred.

In this analysis I want to focus on Chinese purchasing notably of US soyabeans so far this season. The US are expected to produce a large crop of 121Mt, and export near 47% of that to the global market.

But will this hunger for US soyabeans continue before the large South American crops come online from the start of January 2022?

If not, and the global market is faced with a large South American crop this could weigh on the greater oilseed market going into 2022/23 which could pressure ex-farm oilseed rape prices.

US or Brazilian soyabeans?​

Based on 5-year-averages China usually imports c.90% of their soyabeans from either Brazil or the US. Due to seasonality of when these two nations produce their crop this heavily influences when their soyabeans are exported to China. 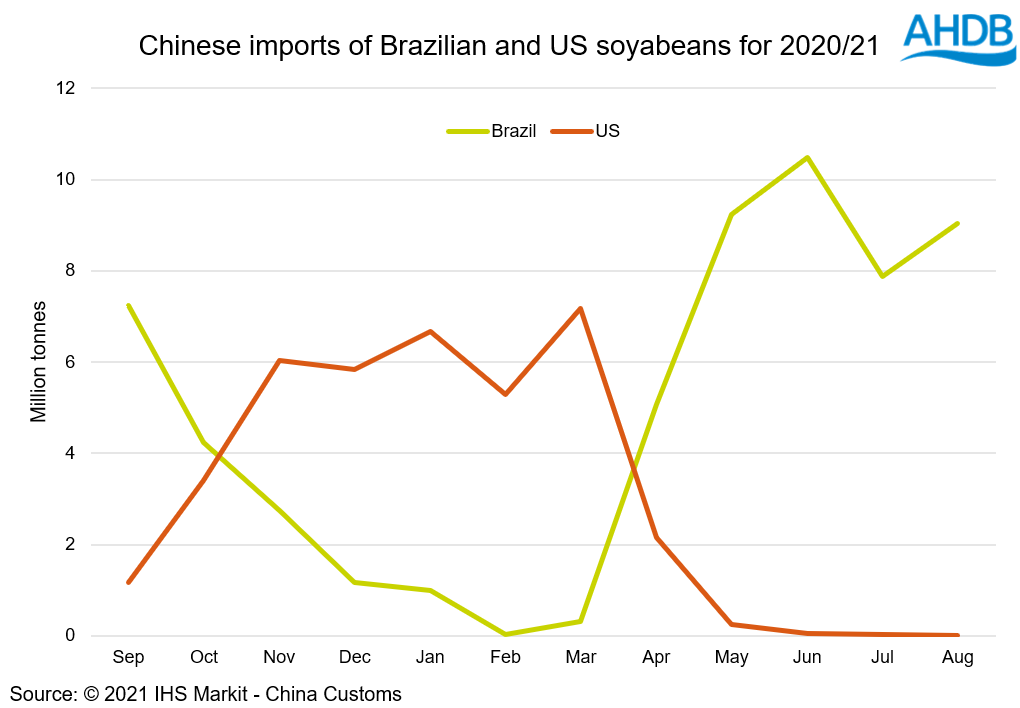 As displayed in the graph above the relationship is inverse, as the US crop is exported from October to March, Brazilian export slows, and vice-versa.

With China agreeing to purchase US agricultural goods going into the 2021/22 marketing year, will current purchasing levels keep the market in support or are we expected to see demand reduce for US-origin and China turn towards Brazil?

This marketing year the US are expected to export 56.8Mt globally. If Chinese purchases are as strong as last year, then c.34Mt (60% of US exports) of this would be destined for China, as an indicative value.

In this marketing year up until week 41 (07 Oct), China has committed to purchasing over 13Mt of US soyabeans. This is 38% of the exports that would go to China, based on the figures above. This is some way below the same point in 2020, however, what is critical to note is that it’s in line with 2015-2017 averages. 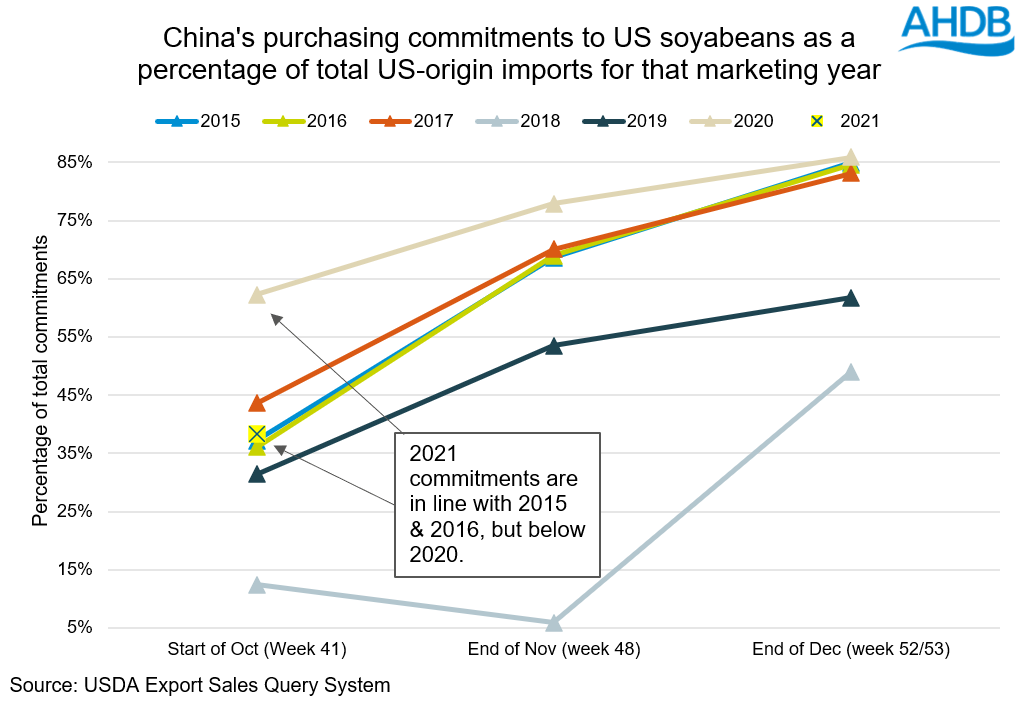 By the end of November, based on previous years China has usually committed to c.70% of its US purchases. Further, the end of December commitments are at around 85%, excluding anomalies such as 2018 and 2019.

Chinese purchasing has been strong over the last few weeks. Between the start of October and the end of 2021, based on previous years data (excluding anomalies mentioned above), China needs to commit to an additional near 16Mt of US-origin soyabeans.

Although Chinese buying is behind last year, it is not drastically lagging behind pre-trade dispute purchasing, if anything it is in-line.

However, we need to see China continue purchasing US-origin as the crop is harvested and comes to market.

If we do not see China commit to expected levels by the end of 2021. This would indicate that;

A) they do not require the large amount that was expected.

B) they will be looking to source Brazilian origin soyabeans.

Both parameters will bear on the market as the Brazilian crop is estimated at 144Mt by the USDA. This bear will likely transpire into weaker rapeseed prices in the longer term. That said, It is worth noting that the Brazilian soyabean picture also remains a key watch point, given the risk of a second La Niña.