In February, we speculated as to whether fertiliser prices could get to £300/tonne again, based on Chicago maize prices and demand for fertiliser, given their historic relationship. In July, they did just that.

Ammonia nitrate (AN) fertiliser prices are driven not only by demand of course, but also by supply, which itself is influenced by the cost of production. These costs have increased dramatically as the price of natural gas, the main feedstock, has soared. So much so that production was halted at two of the UK’s main sites. 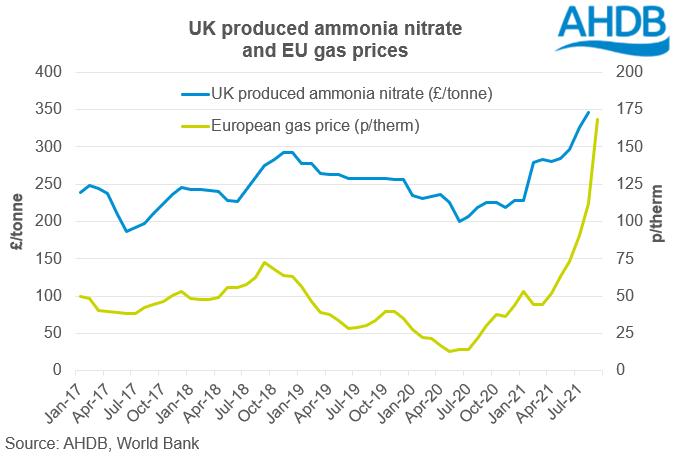 Unsurprisingly, there is a positive relationship between the price of UK produced AN, and gas prices in Europe. The latter have rallied extremely sharply in a fundamentally tight European market situation, with uncomfortably little gas in store ahead of winter. More Russian gas supplies may yet come to market, but until then, it has been up to the demand-side, to try to balance. This happens first by fuel switching in the electricity generation sector, but then by demand destruction, including in fertiliser production itself. 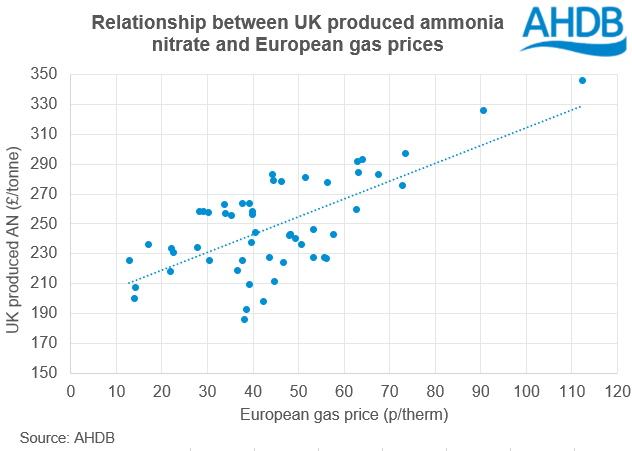 Based on gas prices in the month, a substantial increase in September recorded AN prices can be expected, with more to come. A very rough estimate based on the relationship with gas alone would imply a price in excess of £400/tonne, and that’s without supply interruptions. Demand plays a part too, and AN prices were already outpacing wheat price gains. At the end of last week, offers had been heard in the region of £600/tonne.

Fertiliser application is particularly important for those seeking to reach milling grade on wheat. And some farmers have already expressed concerns about potential yields. This could have implications for the UK wheat balance in the coming season.

AN prices may reach levels where even the decision to apply, if the intention is to seek a milling wheat price premium over feed wheat, is not a straightforward one. We will publish analysis over winter to help inform decision making on fertiliser applications.

Can we have a report into world grain stocks, specifically compared with annual usage, and a breakdown of how much of that stock is held by "known shysters" like China whos statisticians are under the government thumb?
D

Nobody really knows do they? It’s all smoke and mirrors then suddenly there is an “unforeseen” change that some folks probably knew about months ago. We plebs are never party to that kind of info.