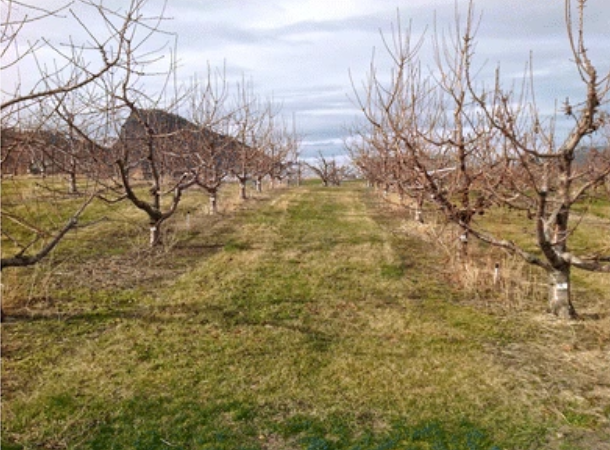 Commercial perennial agriculture is prone to declining productivity due to negative plant-soil feedback. An alternative to costly and environmentally harmful conventional treatment such as soil fumigation could be to manipulate soil microbial diversity through careful selection and management of cover crop mixtures. Although cover crops are already used in these systems for other reasons, their capacity to influence soil biota is unexploited. Here, we examine the role of plant diversity and identity on plant-soil feedbacks in the context of perennial agriculture. We identify key microorganisms involved in these feedbacks and explore plant-based strategies for mitigating decline of perennial crop plants. We conclude that (1) increasing plant diversity increases soil microbial diversity, minimizing the proliferation of soil-borne pathogens; (2) populations of beneficial microbes can be increased by increasing plant functional group richness, e.g., legumes, C4 grasses, C3 grasses, and non-leguminous forbs; (3) brassicas suppress fungal pathogens and promote disease-suppressive bacteria; (4) native plants may further promote beneficial soil microbiota; and (5) frequent tillage, herbicide use, and copper fungicides can harm populations of beneficial microbes and, in some cases, contribute to greater crop decline. Non-crop vegetation management is a viable and cost-effective means of minimizing crop decline in perennial monocultures but is in need of more direct experimental investigation in perennial agroecosystems.

Perennial crops often experience reduced productivity over time due to the accumulation of soil-borne pests and pathogens (Hamel et al. 2005; Mazzola and Manici 2012; Úrbez-Torres et al. 2014). This is particularly problematic in woody perennial systems where crop rotation is not possible, and ultimately, replanting is necessary to restore production levels. However, addressing this problem from an ecological perspective may lead to more sustainable solutions or avoidance of decline altogether.

An ecological concept that is useful for understanding crop decline is plant-soil feedbacks. This concept describes the reciprocal effects of plants and their associated soil microbial communities (Bever 1994). Negative soil feedback occurs when plants promote soil microorganisms that are deleterious to their own growth, contributing to the maintenance of plant coexistence in natural systems through density-dependent regulation of dominant species (Bever et al. 2015). In perennial monocultures, however, negative feedback leads to crop decline and replant problems (Hamel et al. 2005; Mazzola and Manici 2012). That is, the deleterious soil microbial community also suppresses the growth of neighboring crop plants.

The negative effect of soil microbial communities in monocultures is not altogether surprising, given the negative relationship between biodiversity and the frequency of parasitism (Civitello et al. 2015). In many systems, low levels of diversity will allow a parasite of the dominant host species to more easily find a suitable host. Increased diversity makes hosts more difficult to find and disease outbreaks less frequent and leads to the “dilution effect” associated with high species richness (Keesing et al. 2010). For plant-soil ecosystems in particular, it is well established that increased soil diversity decreases incidence of plant disease (Garbeva et al. 2004a; van Elsas et al. 2002) and improves plant productivity (van der Heijden et al. 1998, 2008).

Can growers capitalize on this dilution effect by increasing soil microbial diversity in perennial systems? While many mechanisms contribute to forming soil microbial communities, e.g., abiotic filters (Fierer and Jackson 2006; Lauber et al. 2008), there is an extensive body of literature documenting the ability of plants to “train” their associated microbial communities (Badri and Vivanco 2009; Fanin et al. 2014; Hartmann et al. 2009; Rovira 1969). While growers are limited in their ability to manipulate the diversity of crop plants in their cropping system, cover crop identity and diversity can be an efficient way to increase soil microbial diversity and suppress soil-borne pests that cause crop decline (Garbeva et al. 2004a). Cover crops are already a common feature in many perennial systems, but their potential impact on the biotic component of soils is often overlooked. For the purpose of this review, we define the term “cover crop” as managed vegetation grown between crop plant rows, including annual and perennial swards.

Here, we incorporate ecological knowledge of plant-soil feedbacks into the context of perennial agriculture to explore the use of cover crops to increase microbial diversity and manage crop decline. The specific aims of this review are to (1) synthesize our current understanding of how plant communities influence soil microbial communities into the context of cover crops; (2) highlight key beneficial soil microbes and their role in affecting crop decline; and (3) present plant-based strategies to mitigate decline of perennial crops through soil microbial diversity.