Why is the price so high and will it continue?​

In recent years, small domestic crops have offered support to physical OSR prices. Despite a slight rise in current UK production estimates year-on-year, physical prices have started the 2021/22 marketing year strong. In recent history, the UK have been net importers of OSR. As such, our domestic crop size is only a small part in the puzzle. Our domestic prices generally track the Paris rapeseed futures, which are often influenced by the EU and global supply picture at this time of year. 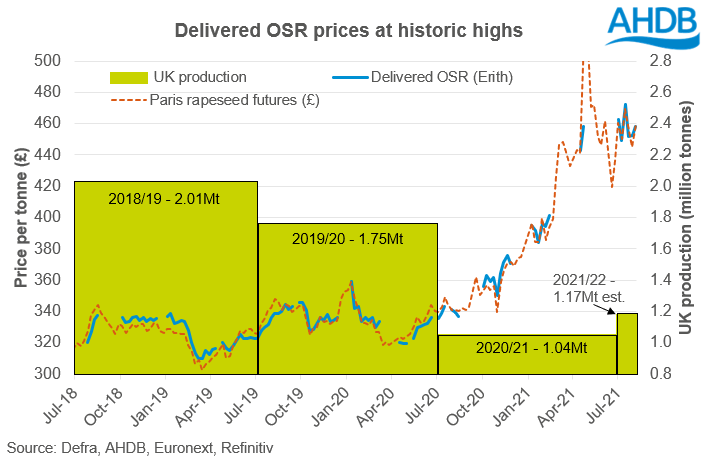 This season has started with a relatively tight supply situation. European and Black Sea harvests have experienced delays. There is also no hiding from the situation in Canada, which has played a key role in rapeseed pricing throughout 2021.

EU imports of rapeseed have increased this season (from 01 July), to 414Kt (up 104Kt on the year), to help ease some of the harvest pressure. Usually, July imports would be dominated by Ukrainian supply. This year, supply has mostly come from Australia.

Canola imports from Australia are at a multi-year high. According to Oilworld.biz, Australian canola exports are due to decline through to September. Therefore, the EU will be looking to switch to Ukrainian supply in earnest. In July, rapeseed imports from the Ukraine were under half that of the previous year. Further, total Ukrainian rapeseed exports in July were the lowest since 2012 (Oilword.biz).

It is still unclear how big the losses have been to the Canadian crop, and this will remain a key watch point for UK prices.

Short-term, until Ukraine’s exports return to normal levels and Canadian crop losses are quantified, prices will likely remain supported. But the supply pressure could ease as harvest pace picks up in the Ukraine. After that, attention will turn to the Australian new crop picture.

Delivered rapeseed prices reach historic highs this season
For information on price direction for crops too, make sure to subscribe to Grain Market Daily’s and Market Report from our team.