Written by Lindsey Anderson, Humberto Blanco, Mary Drewnoski and Jim MacDonald, Published in CropWatch from the University of Nebraska-Lincoln

Separation of crop and livestock production can degrade soil and other natural resources while reducing economic returns. Additionally, the conversion of grassland to cropland has put a strain on forage for cattle. Grazing cover crops can be a potential option to re-integrate crops with livestock production and reverse the adverse effects of separating crops and livestock production. Grazing cover crops could still maintain the benefits from cover crops as roots and some stubble remain after grazing. Cover crop grazing has shown to improve economic returns (Franzluebbers and Stuedemann, 2007) while still capturing benefits from cover crops (Faé et al., 2009; Maughan et al., 2009); however, soil compaction risks can be a concern.

On the other hand, a study in Georgia found that compaction increased more when grazing under conventional tillage (disk plowing to 6-8 in.) compared to grazing under no-till (Franzluebbers and Stuedemann, 2008). This suggests conservation tillage, such as no till or strip till, could be more beneficial than conventional tillage when grazing cover crops. Another study in Georgia found cover crop grazing in the spring after an above-average rainfall increased soil compaction due to soil wetness and thus reduced cotton yields (Schomberg et al., 2014). Thus, soil wetness is also important to consider when cover crop grazing.


Our cover crop grazing experiment was established in 2015 at the Eastern Nebraska Research and Education Center near Mead, Nebraska. There were two study fields in this experiment, and each field was 52 acres under center pivot irrigation and no-till. The rotation was corn-soybean, and each field was cut in half and harvested as corn silage in one-half of the field and high moisture corn in the other half of the field. Corn silage was harvested around Sept. 1 and high moisture corn (about 32% moisture) harvested around Sept. 15, about 25 days before typical dry corn (about 15% moisture) harvest. A cover crop of Horsepower oat was drilled at 96 lbs per acre following corn harvest (Figure 2). Following cover crop planting, the fields received 40 lbs N per acre from ammonium nitrate. No cover crop was planted following soybean harvest.


Cattle grazed from November to December at stocking rates ranging from 0.6 to 1.7 head per acre, with cattle initial weights ranging from 507 to 553 pounds throughout the study. The stocking rates were calculated based on a target grazing period of 70 days and accounted for cover crop biomass under corn silage and both cover crop biomass plus corn residue amount under high moisture corn. Forage allowance was about 25.6 pounds per steer per day in the first two years and about 39.0 pounds per steer per day in the last three years. Grazing only occurred in late fall/winter following the corn phase of the rotation with grazing durations ranged from 30 to 69 days over the five-year experiment. Based on the rotation, grazing occurred twice in one field and three times in the other field over a five-year period.


It is believed cover crop grazing had no impact on soil compaction in this experiment because:

Grazing only occurred after the corn phase of the corn-soybean rotation, which reduced the frequency of grazing (every other year grazing).

Grazing occurred in late fall when the soil is less likely to be wet compared to spring, with spring having more rainfall.

Cover crop grazing removed about 47 to 87% of cover crop biomass due to cattle intake and trampling (Figure 3). However, much of the biomass removed was actually incorporated into the soil surface from trampling, retaining cover crop residue within the system. Additionally, cattle intake removes little nutrients from the system, as cattle excrete most of the nutrients consumed during grazing. For these reasons above, we believe cover crop grazing in this study may have had no negative impact on soil properties due to the addition of trampled cover crop aboveground biomass, cover crop root biomass and infrequency of grazing (every other year).

Should I Graze My Cover Crops?​ 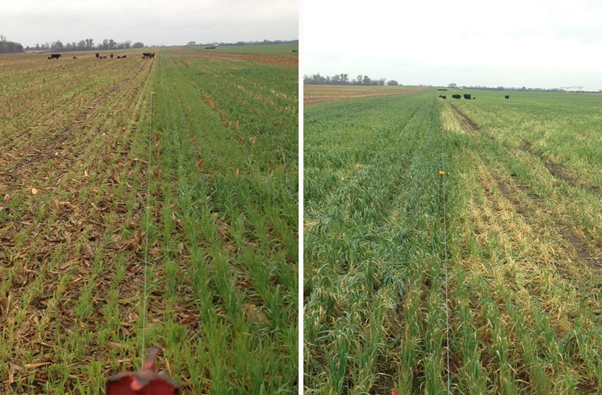 
We thank Nebraska Environmental Trust and the USDA SARE for their funding of this research. Also, we thank Kallie Calus, McKenna Brinton, Benjamin Hansen, Kristen Ulmer, Zachary Carlson and Fred Hilscher for their work on this research. Additionally, we thank Mark Schroeder and team at the Eastern Nebraska Research and Education Center for field management, Husker Genetics for acquiring and planting oats, Elizabeth Jeske for soil microbial analysis, and all undergraduate and graduate students assisting with fieldwork.

Effects and economics of grazing cover crops in a three-year non-irrigated rotation (https://cropwatch.unl.edu/2021/effe...cover-crops-three-year-non-irrigated-rotation)

Member · From Lichfield
Direct Driller is a new farming magazine, designed by farmers for farmers to educate and inform the industry about direct drilling and no-till techniques, soil regeneration and soil conservation in arable and mixed farming situations.
Media
S