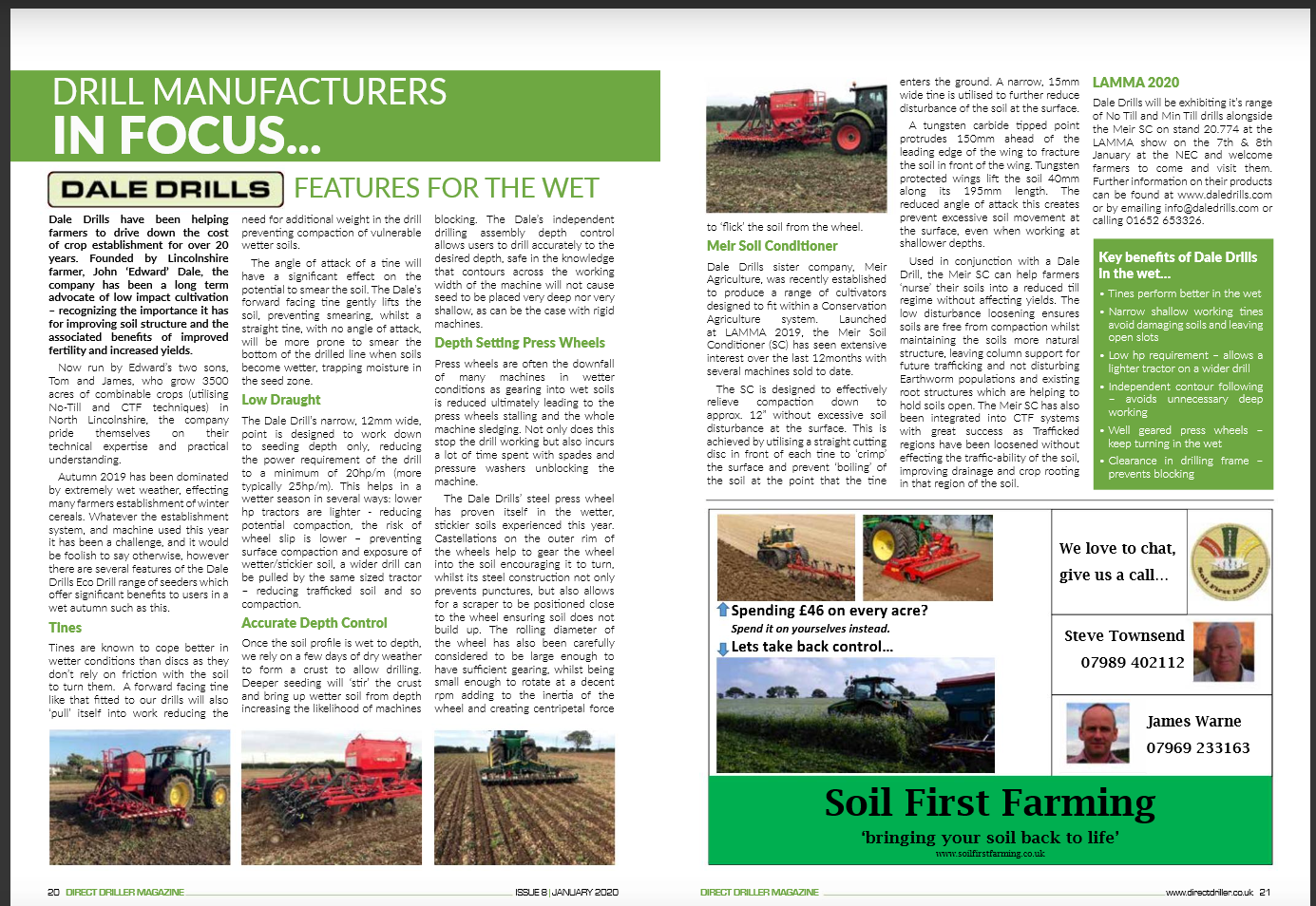 FEATURES FOR THE WET

Dale Drills have been helping farmers to drive down the cost of crop establishment for over 20 years. Founded by Lincolnshire farmer, John ‘Edward’ Dale, the company has been a long term advocate of low impact cultivation – recognizing the importance it has for improving soil structure and the associated benefits of improved fertility and increased yields.

Now run by Edward’s two sons, Tom and James, who grow 3500 acres of combinable crops (utilising No-Till and CTF techniques) in North Lincolnshire, the company pride themselves on their technical expertise and practical understanding. Autumn 2019 has been dominated by extremely wet weather, effecting many farmers establishment of winter cereals.

Whatever the establishment system, and machine used this year it has been a challenge, and it would be foolish to say otherwise, however there are several features of the Dale Drills Eco Drill range of seeders which offer significant benefits to users in a wet autumn such as this.

Tines are known to cope better in wetter conditions than discs as they don’t rely on friction with the soil to turn them. A forward facing tine like that fitted to our drills will also ‘pull’ itself into work reducing the need for additional weight in the drill preventing compaction of vulnerable wetter soils. The angle of attack of a tine will have a significant effect on the potential to smear the soil.

The Dale’s forward facing tine gently lifts the soil, preventing smearing, whilst a straight tine, with no angle of attack, will be more prone to smear the bottom of the drilled line when soils become wetter, trapping moisture in the seed zone.

The Dale Drill’s narrow, 12mm wide, point is designed to work down to seeding depth only, reducing the power requirement of the drill to a minimum of 20hp/m (more typically 25hp/m). This helps in a wetter season in several ways: lower hp tractors are lighter - reducing potential compaction, the risk of wheel slip is lower – preventing surface compaction and exposure of wetter/stickier soil, a wider drill can be pulled by the same sized tractor – reducing trafficked soil and so compaction.

Once the soil profile is wet to depth, we rely on a few days of dry weather to form a crust to allow drilling. Deeper seeding will ‘stir’ the crust and bring up wetter soil from depth increasing the likelihood of machines blocking. The Dale’s independent drilling assembly depth control allows users to drill accurately to the desired depth, safe in the knowledge that contours across the working width of the machine will not cause seed to be placed very deep nor very shallow, as can be the case with rigid machines.

Press wheels are often the downfall of many machines in wetter conditions as gearing into wet soils is reduced ultimately leading to the press wheels stalling and the whole machine sledging. Not only does this stop the drill working but also incurs a lot of time spent with spades and pressure washers unblocking the machine. The Dale Drills’ steel press wheel has proven itself in the wetter, stickier soils experienced this year.

Castellations on the outer rim of the wheels help to gear the wheel into the soil encouraging it to turn, whilst its steel construction not only prevents punctures, but also allows for a scraper to be positioned close to the wheel ensuring soil does not build up. The rolling diameter of the wheel has also been carefully considered to be large enough to have sufficient gearing, whilst being small enough to rotate at a decent rpm adding to the inertia of the wheel and creating centripetal force
to ‘flick’ the soil from the wheel.

Dale Drills sister company, Meir Agriculture, was recently established to produce a range of cultivators designed to fit within a Conservation Agriculture system. Launched at LAMMA 2019, the Meir Soil Conditioner (SC) has seen extensive interest over the last 12months with several machines sold to date. The SC is designed to effectively relieve compaction down to approx. 12” without excessive soil disturbance at the surface.

This is achieved by utilising a straight cutting disc in front of each tine to ‘crimp’ the surface and prevent ‘boiling’ of the soil at the point that the tine enters the ground. A narrow, 15mm wide tine is utilised to further reduce disturbance of the soil at the surface. A tungsten carbide tipped point protrudes 150mm ahead of the leading edge of the wing to fracture the soil in front of the wing.

Tungsten protected wings lift the soil 40mm along its 195mm length. The reduced angle of attack this creates prevent excessive soil movement at the surface, even when working at shallower depths. Used in conjunction with a Dale Drill, the Meir SC can help farmers ‘nurse’ their soils into a reduced till regime without affecting yields. The low disturbance loosening ensures soils are free from compaction whilst maintaining the soils more natural structure, leaving column support for future trafficking and not disturbing Earthworm populations and existing root structures which are helping to hold soils open. The Meir SC has also been integrated into CTF systems with great success as Trafficked regions have been loosened without effecting the traffic-ability of the soil, improving drainage and crop rooting in that region of the soil.

Innovation and tech in action at Cereals LIVE

Innovation and tech in action at Cereals LIVE

​
There is nothing quite like seeing tech in action to understand how it works and how it can be beneficial on farm, which is why Cereals LIVE will be putting demos right at growers’ fingertips.

From state-of-the-art robotics, to autonomous tractors and electronic weeding, Cereals LIVE will have it all available in video demonstrations in the brand new Innovation and Tech Demo ring, says event director, Alli McEntyre. “It’s a brave new world for farming, with innovation driving sustainability and efficiency. Being able to see the most cutting-edge technology in action will give farmers an insight into where their businesses could be headed very soon.”

So what will growers be...
News
Continue…
Top