Sweepa said:
What do you do for accomodation? and is it expensive?
Click to expand...

Accommodation in Tokyo worked out about £80 a night in an aparthotel
shinjuku Citadines
This seemed very good value compared to London as we had a very big room with a kitchenette.
This was room only breakfast was extra
On the trip I do not know as it was all part of the deal
Food can range from very cheap and good , to expensive. we have had all manner of styles from about five pounds up.

apologies for mix ups in the posting of pictures , not sure how that came about

I have seen a few strange pieces of kit, most I can work out, but there comes a time 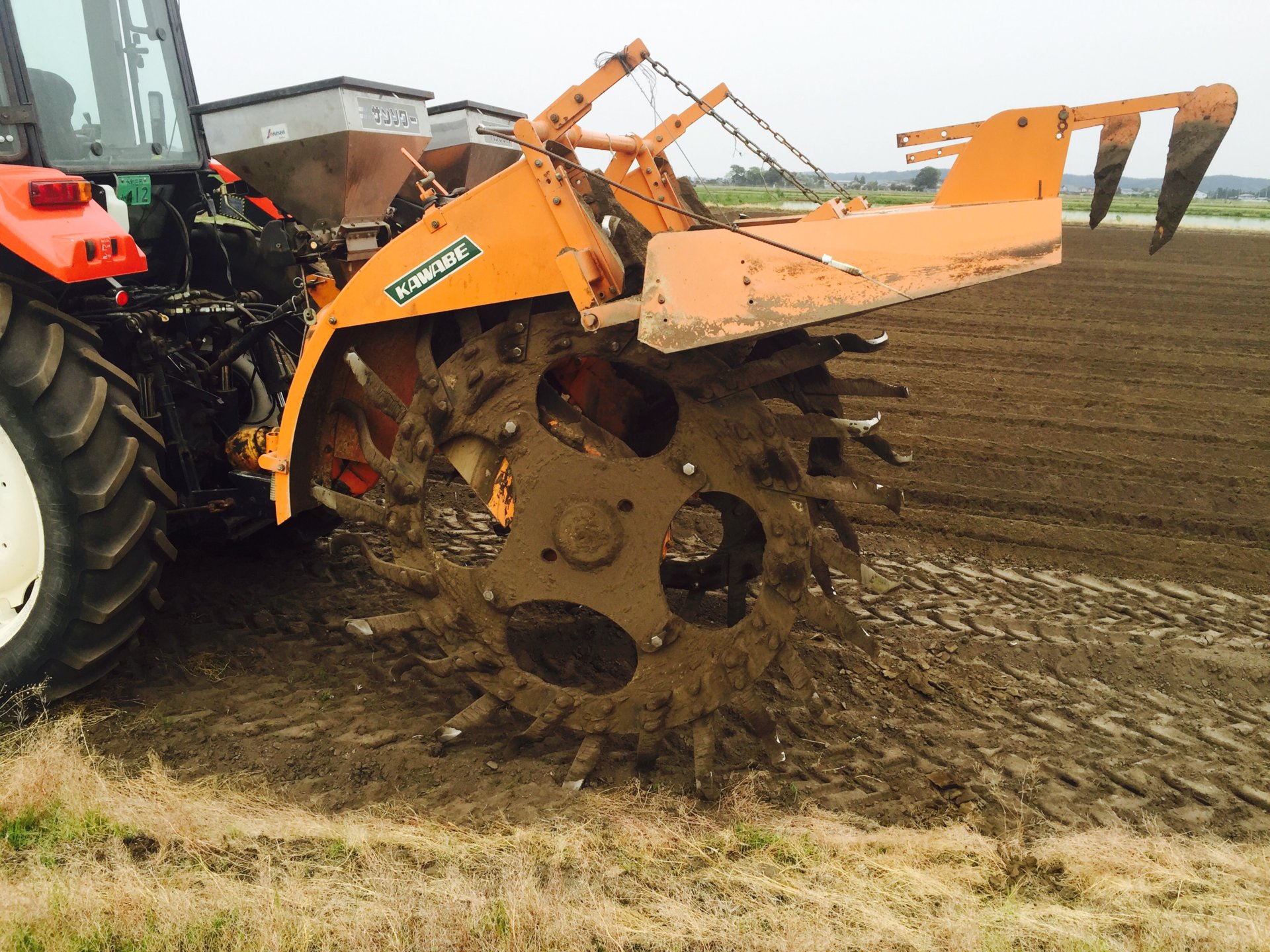 It has applicators fitted, but the tractor seems too small for o pull it 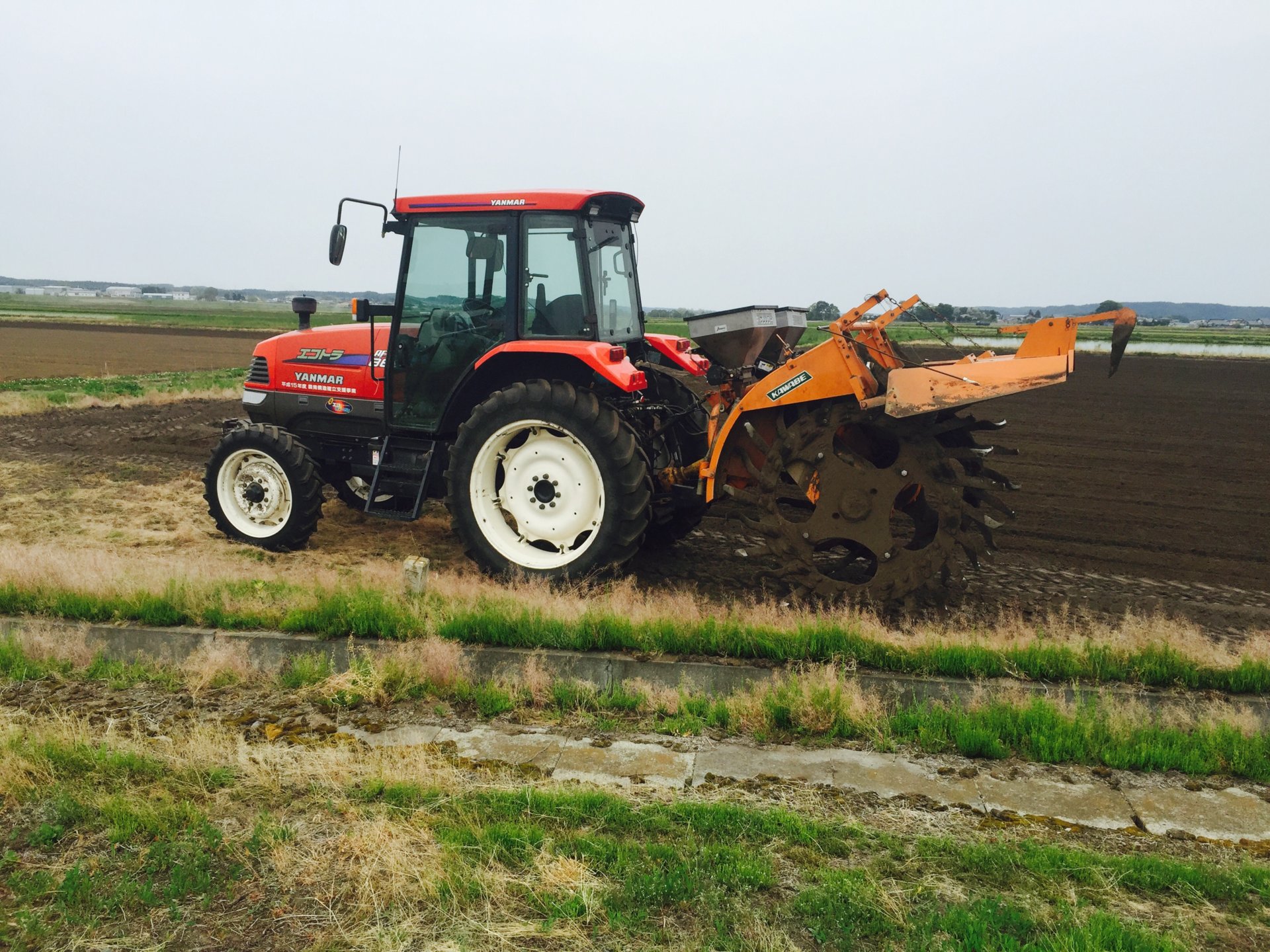 According to their website it is for deep plowing for Burdocks & Yams described as a self propelled trencher for tractors, on the off side it has some sort of chain configurement
as in 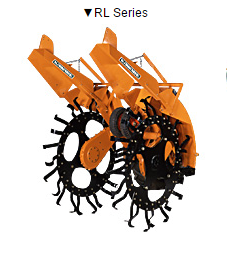 That would be the answer, the eat a lot of sweet potatoes here. I have only been offered potatoes once here, but you see them growing everywhere possibly they only eat them in season. 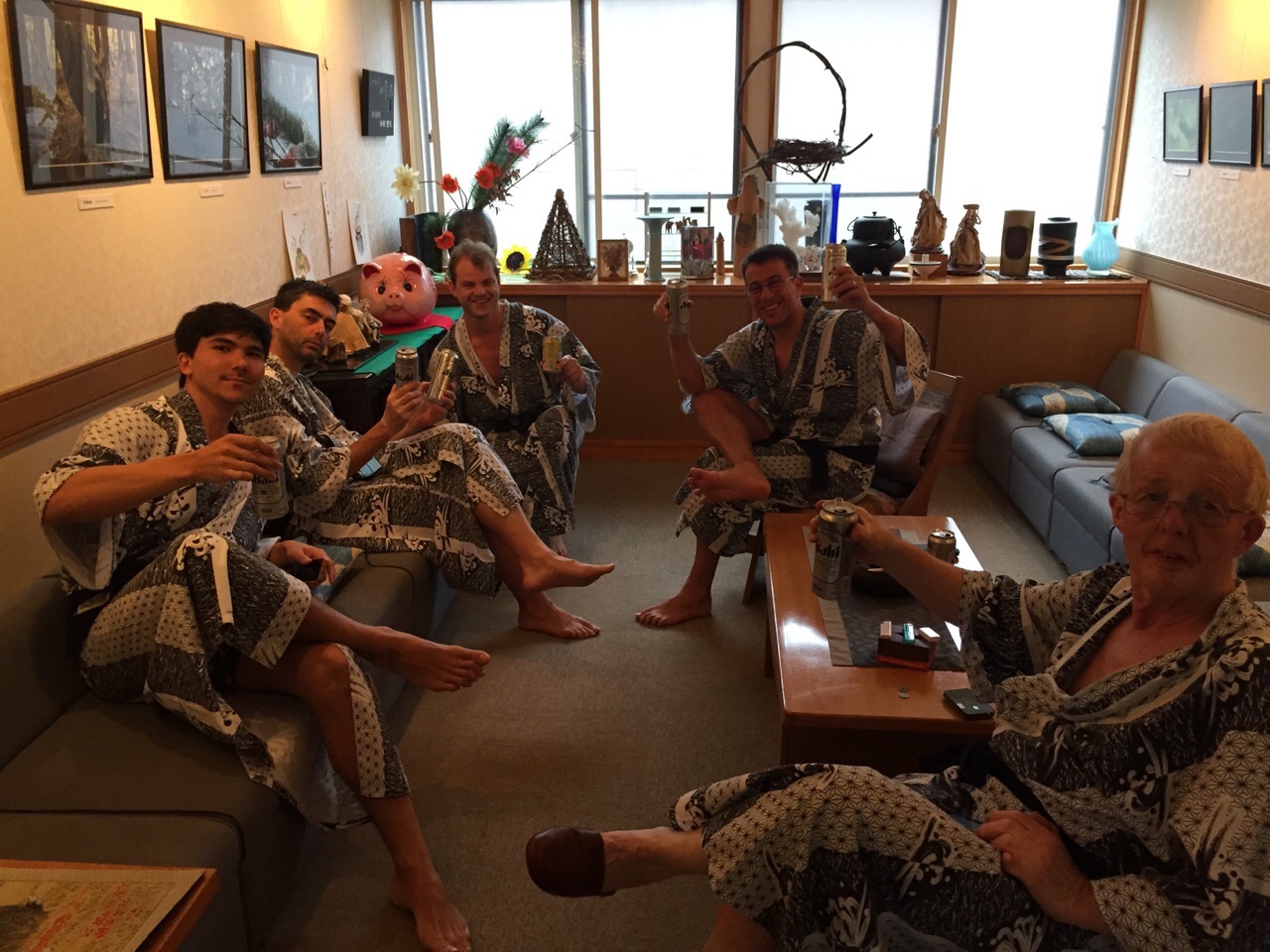 After the days ride, a bathe in the Onsen is wonderful.
The Onsen is a public bath where certain ritual has to be followed, first, stripping right off. Then a thorough shower , sitting down! A complete all over wash is de rigour. After this you get in the Onsen, which is normally a glorified hot tub although the traditional ones are natural hot springs.
The modern Onsen are normally single sex, although there are some mixed, but I am told that the only women who use the mixed baths tend to be rather old in the hope of looking at the young men
Certainly the Japanese have a easy view of nudity, not knowing the way to the Onsen the manageress offered to show me the way, she took me straight into the changing room to the horror of our young mechanic who was stripped off.
After the Onsen you are give a Yakkuta, (dressing gown) to wear in the hotel, so it is off to the bar.
And of course there is no shoes in the hotel,

On board the ferry from the main island of Honshu, for the next island of Hokkaido. They are very concerned the bikes may break free and run amok in the hold 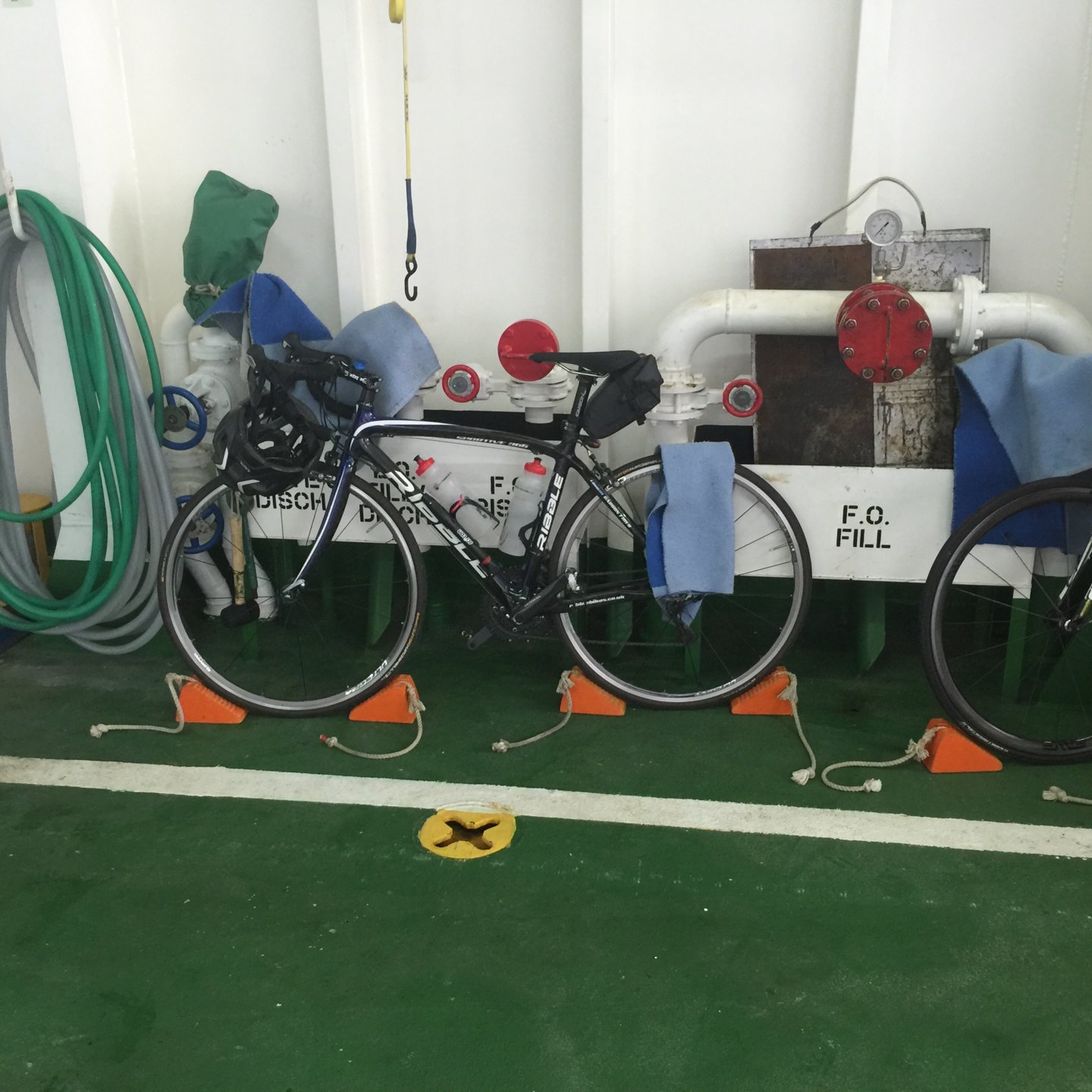 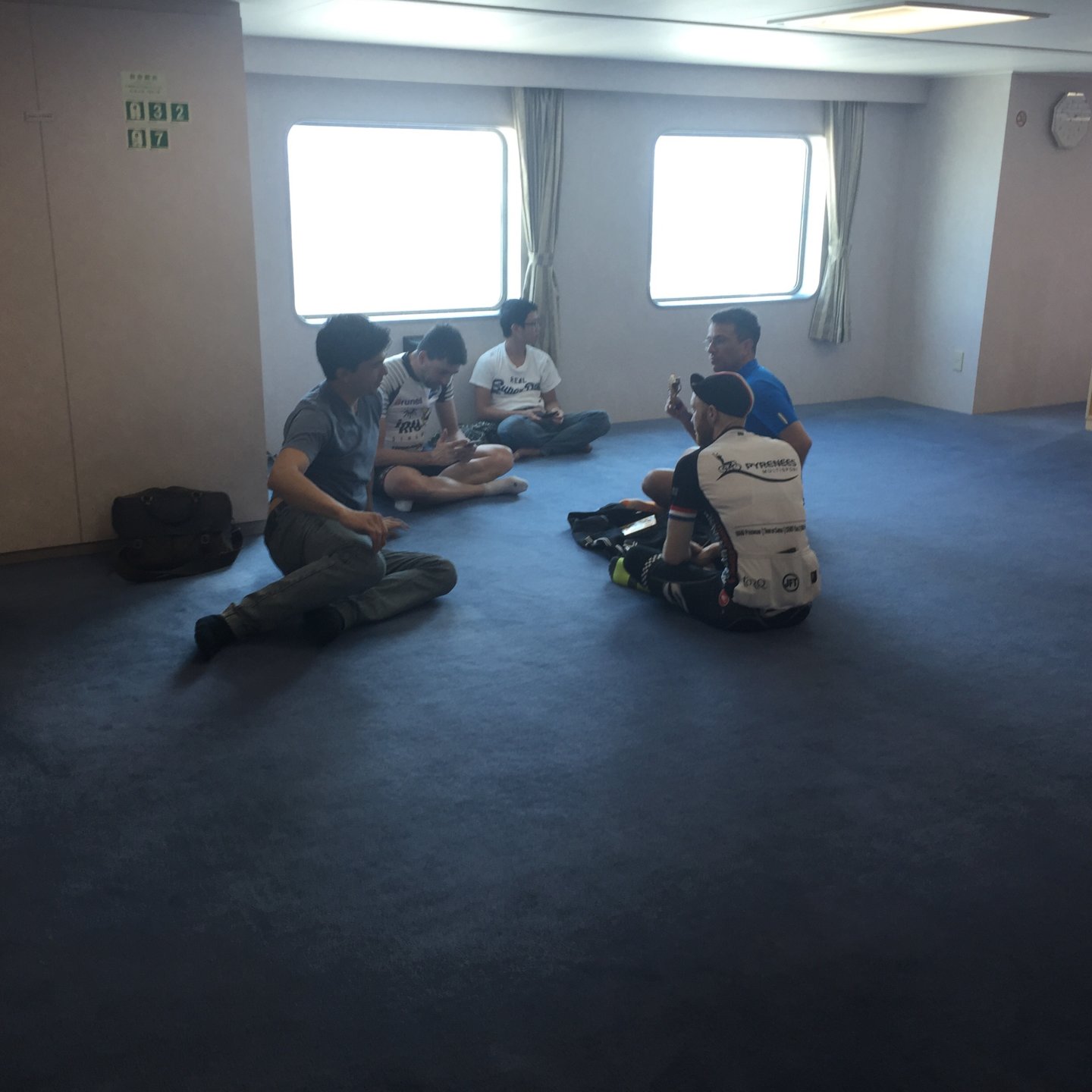 2 days of disaster.
Firstly. Yesterday My son had to drop out, as his knee has become inflamed, not sure of the problem, but he was reduced to pedalling with one foot which was not possible up the inclines.
Today, I think, riding downhill fast, through one of the many tunnels the road surface became extremely rough, thankfully I managed to stay upright, but at some point I lost my new phone which was mounted on my handlebars. I did not notice for a couple of miles but as the phone finder could not. Locate it, we assume a passing vehicle has run. Over it.
Thankfully it is backed up to the cloud and hopefully the. Insurance will cover it.
Otherwise we have only one more day to go, sadly today had another issue, we were passing along the coast for fifty miles and the sea mist meant we saw little and it was very cold unles we kept pedalling very hard.
One thing obvious though. Is the concern for Tsunami with sirens every few miles and towers regularly which have markings up to 20 metres high
When I get home many more pictures to come

Om looking foreward to the pictures.enjoy your holiday
Nick...

Well I have finally made Sapporo, today was probably the hardest riding of my life, with 85 miles up and down mountains.
I have had issues for the last 2 days Waking up with a bad hangover, despite drinking barely a pint each day. I wonder if it is because I am consuming too few calories per day causing the body to give me nausea , mind you the average Japanese breakfast of fish, fried eggs, sausage and vegetables served cold! Together with rice and the inevitable miso soup cannot help.
We also lost another rider today with identical symptoms to my son , leaving the oldest pair to finish. I think it is a case of the tortoise and the hare
Hopefully a lot more photos to come when I am home. Strangely virtually all the tackle in the island of Honshu was modern and invariably Japanese , however here in Hokaido there is far more older kit including Fords, MF , JD and my old favourite, 3 David Browns looking to be in good order on one farm.

sorry have been a bit tardy sorting through my photos , what with trying to sort out a new phone and other business.
I have been suffering Ketosis, caused by an insufficient intake of calories. It is really quite nasty as in the mornings, for the last 2 days of the ride I was feeling very hung over, and the only cure is eating not easy when you feel very queasy. I did not realise at first putting it down to the cold breakfasts we were often offered, including cold fried eggs, not thew best after what feels like a very heavy night. In fact the drinking at all times was very moderate. The real problem was burning up to 6000 calories a day but only consuming g possible 3000. Never mind I have now lost over 10Kg.
a few more pictures
rice paddies 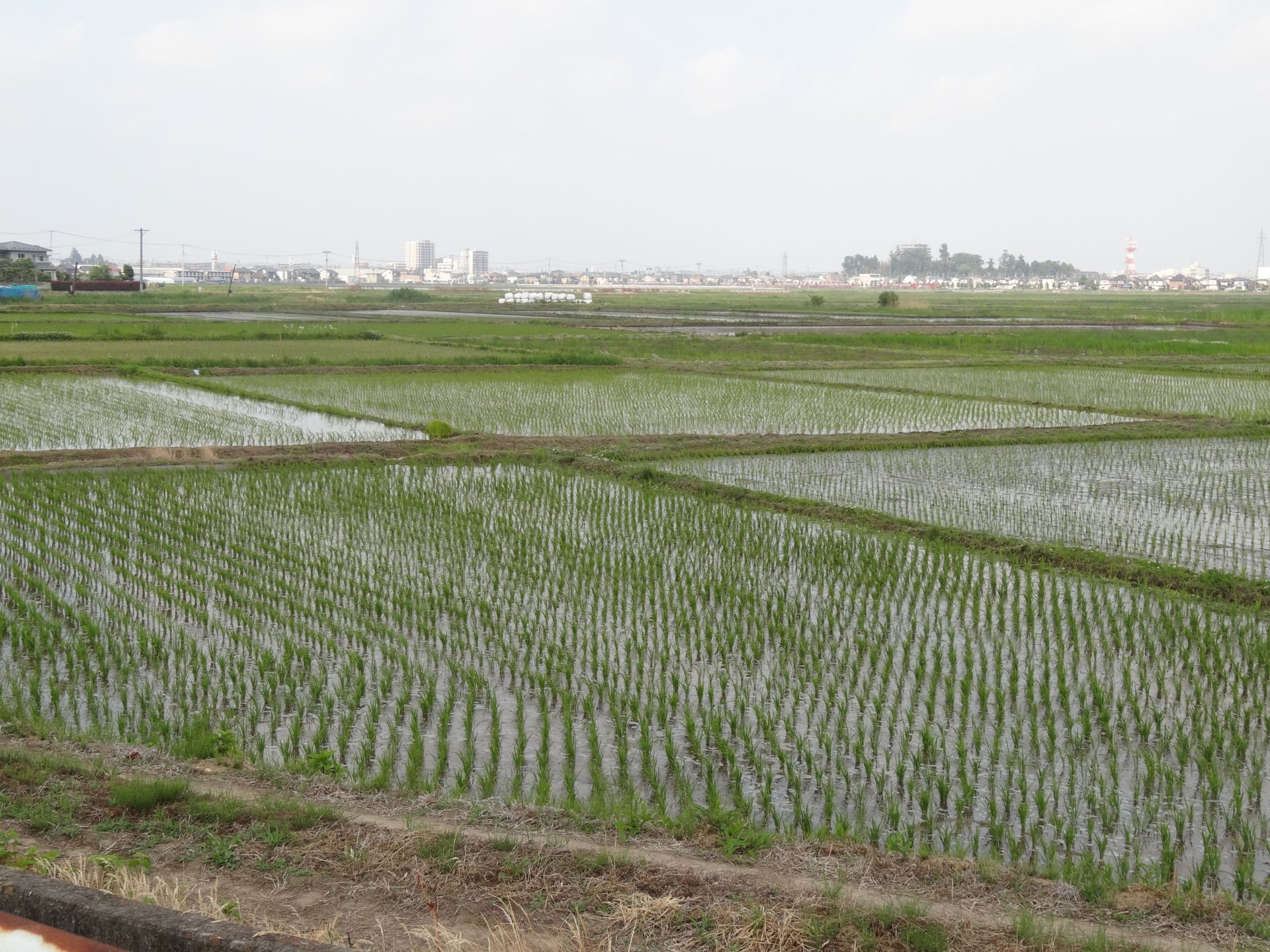 cultivating the paddies, I guess they plough them dry, then start the flooding process before coming in with what seems the Japanese farmers favourite tool, the Rotavator, see them everywhere 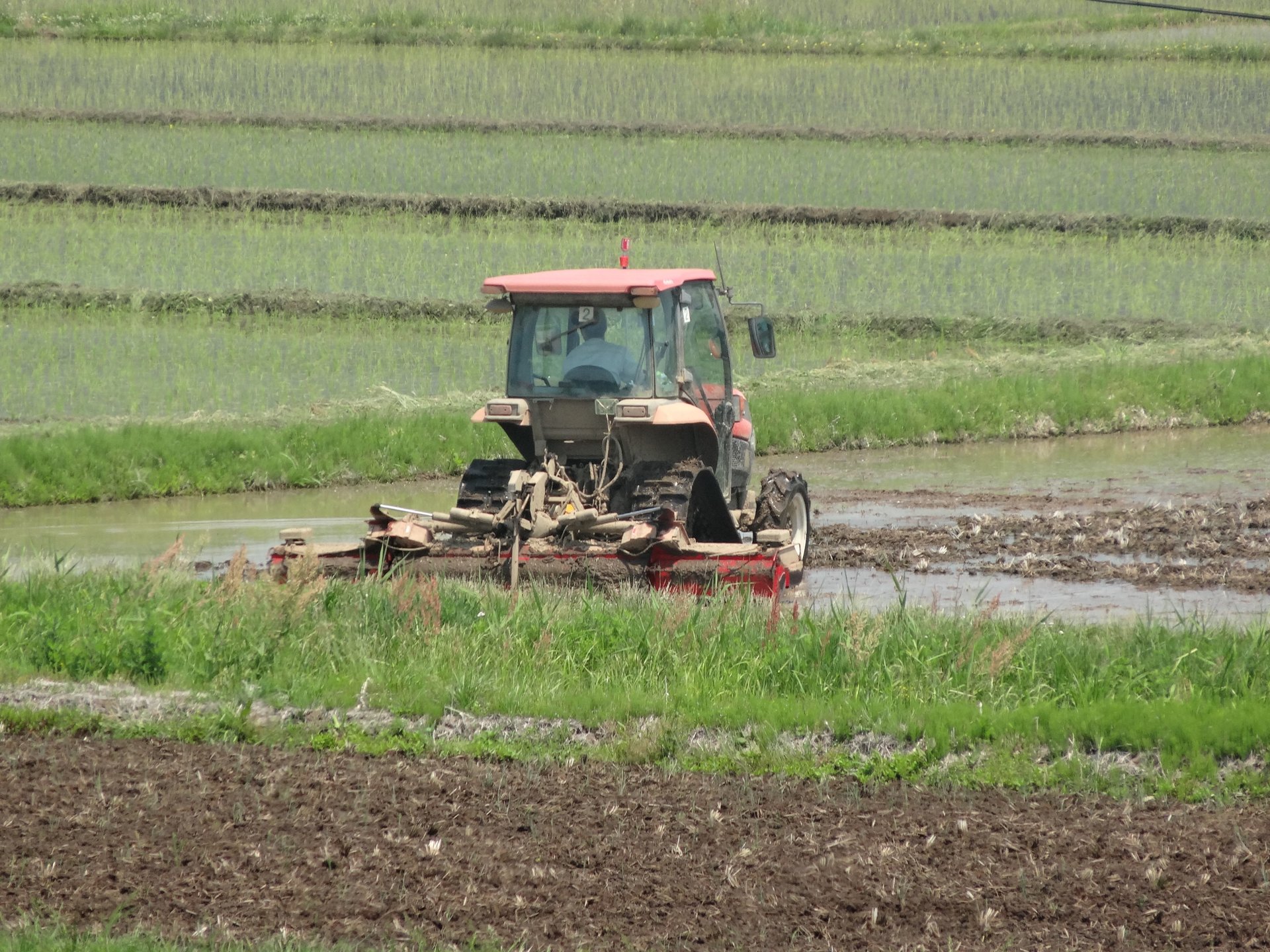 This tractor has only hal;f tracks but it was common to see them kitted out as a mini Quadtrac.
it seemed a large rotavator on a small tractor. As he went across the field in one pass it changed from what looked relatively dry to a swamp.
then comes the planter, this time an Iseki 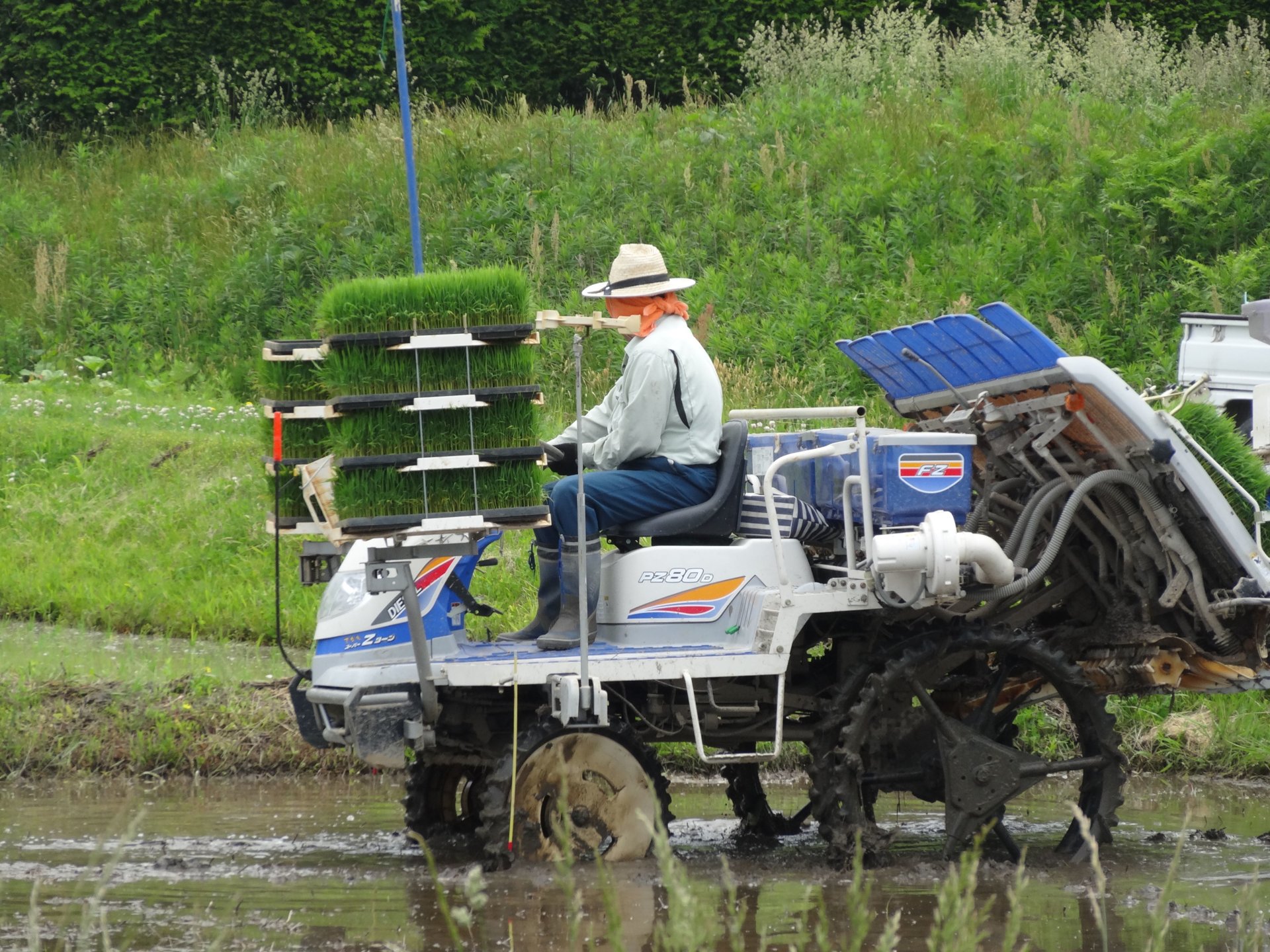 never did work out how they operate.
Lunch stop at a typical Japanese roadside Cafe, as usual; shoes off! 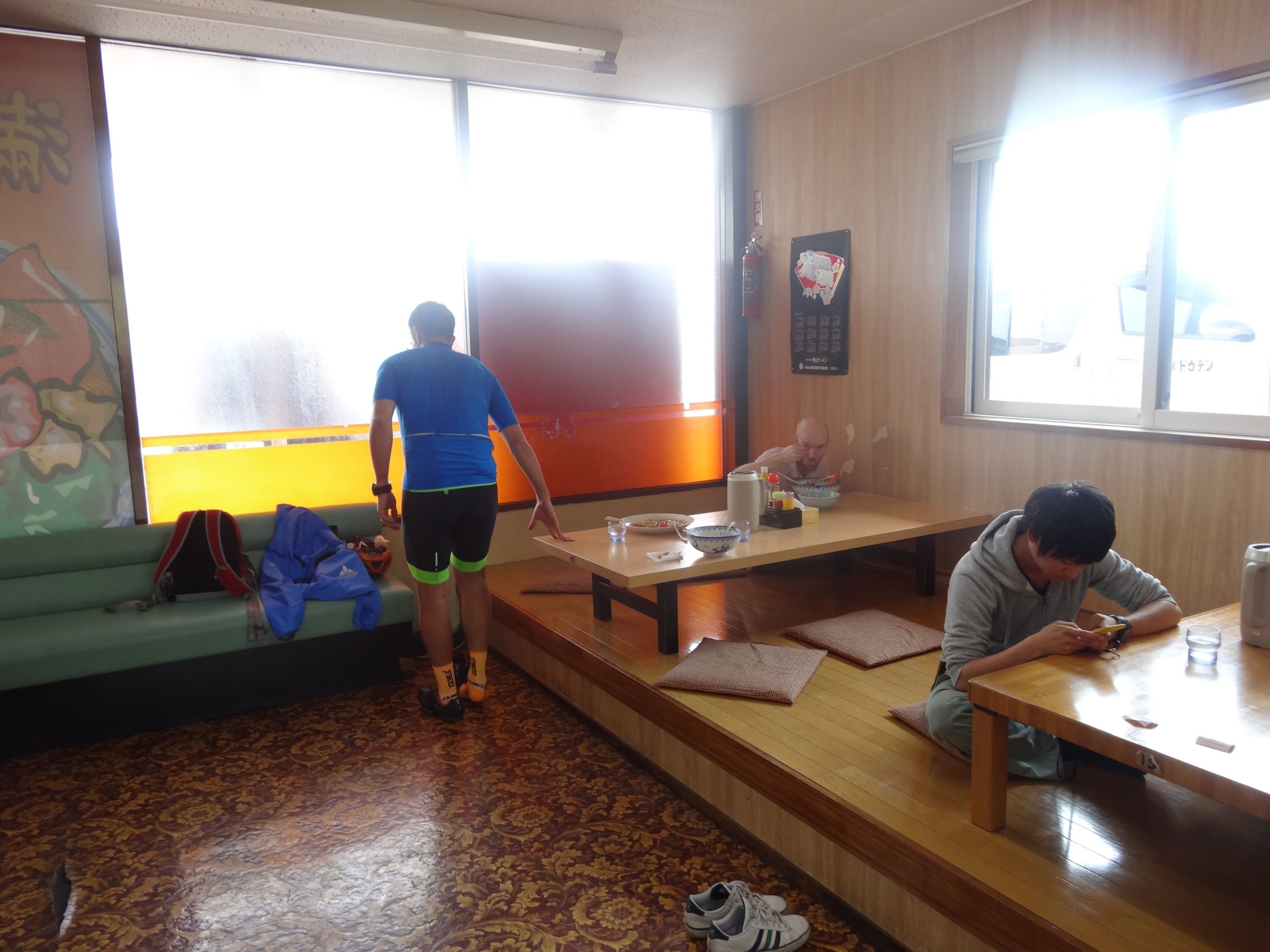 one of our best meals here, the seafood ramen. 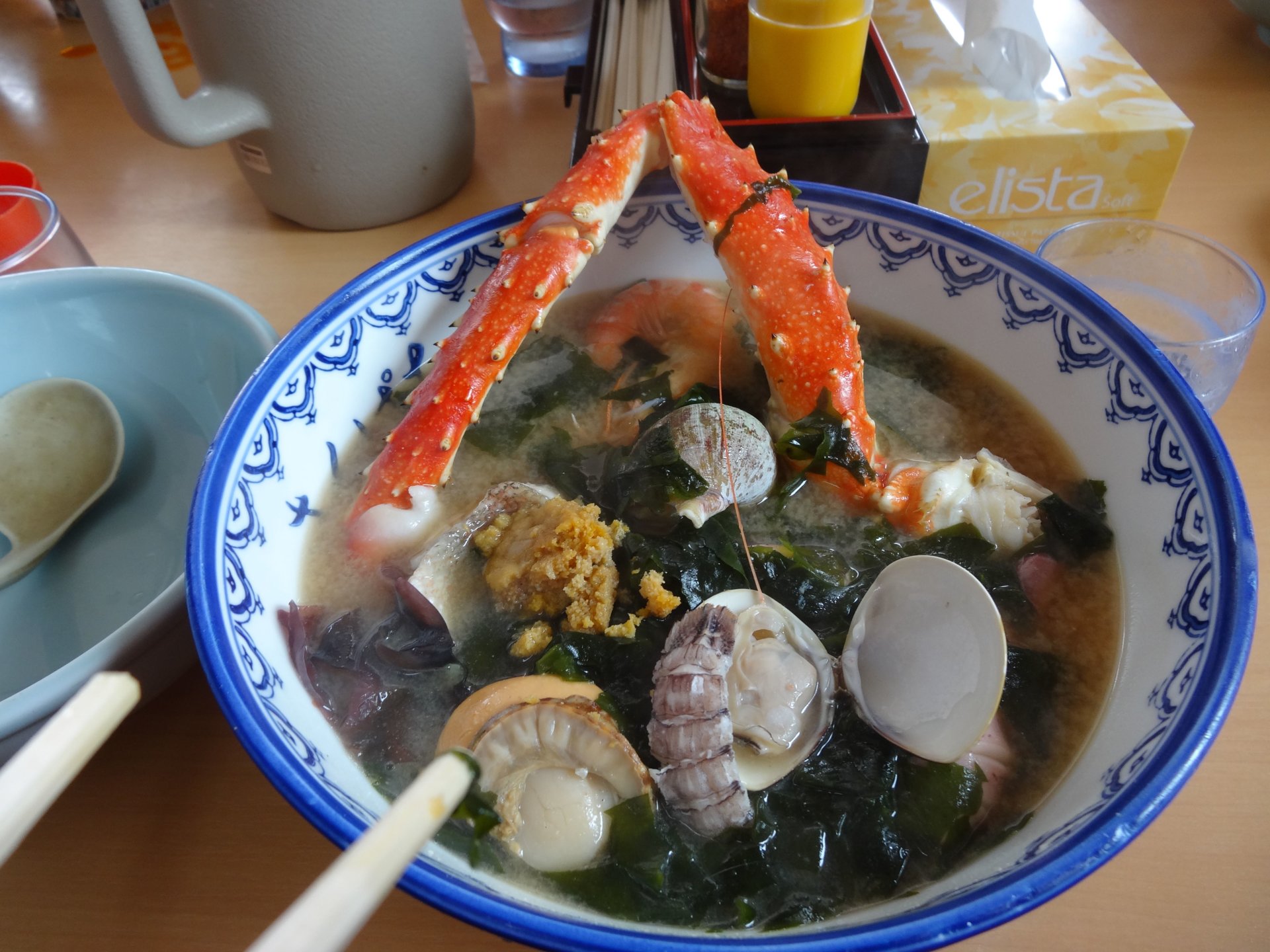 The pictures do not do justice to the size of the bowl which was large. The snow crab is out of this world and you understand why people go to such lengths to catch it ( think dangerous catch ). The dish was a large mix of different cuts and fish laid on top of a big heap of noodles, the green of course is seaweed. getting the whelk out of its shell with chopsticks nearly defeated me, but the effort was worth it.
Down the road I was surprised to come across these tractors , we had seen most makes of tractor , not many John Deere but obviously the Japanese tractors were the most common with dealerships for Kubota, Iseki, Yanmar, in most towns we passed and New Holland and Massey quite frequent. However we passed this farm with 3 of these to my pleasant surprise 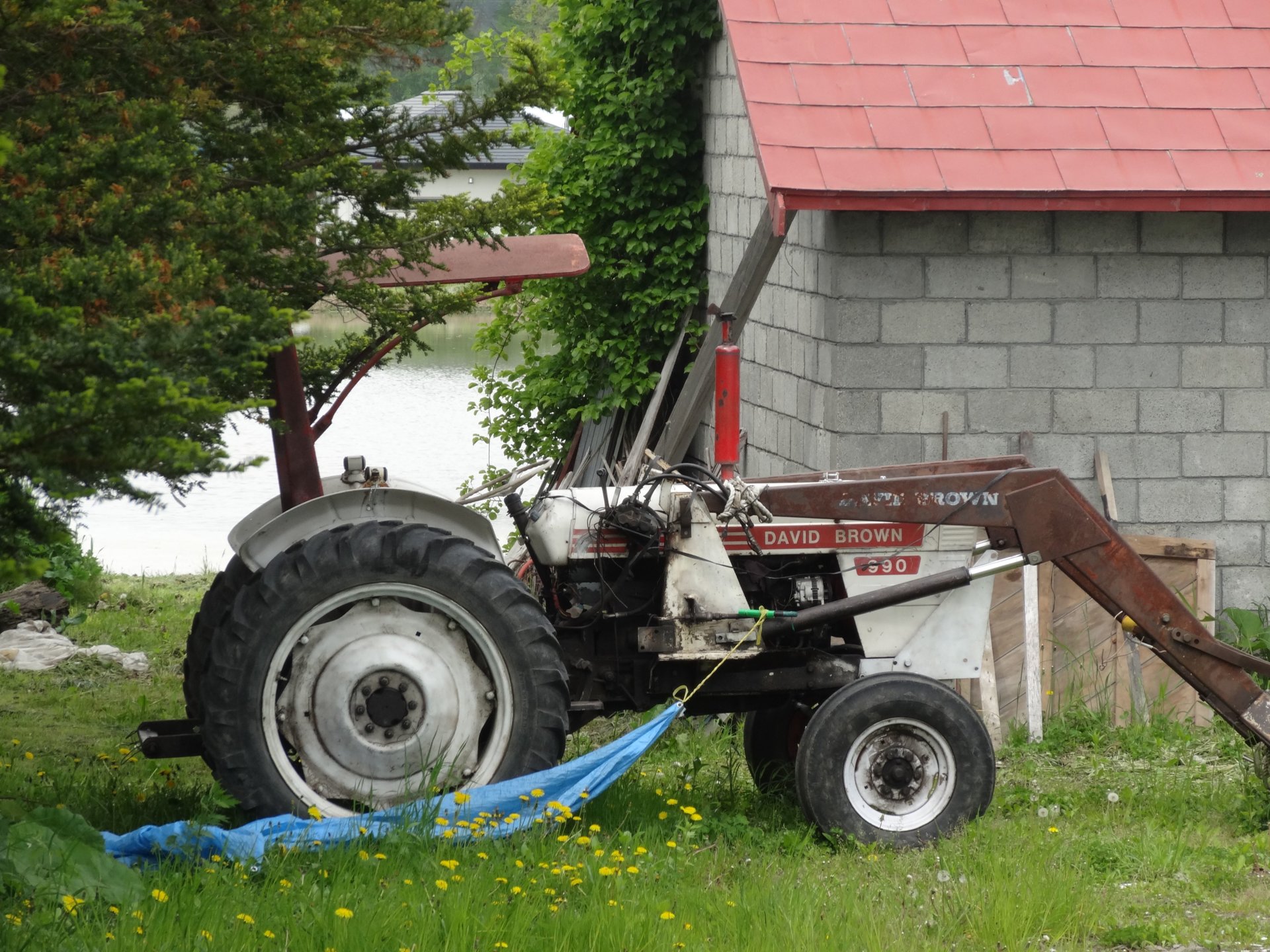 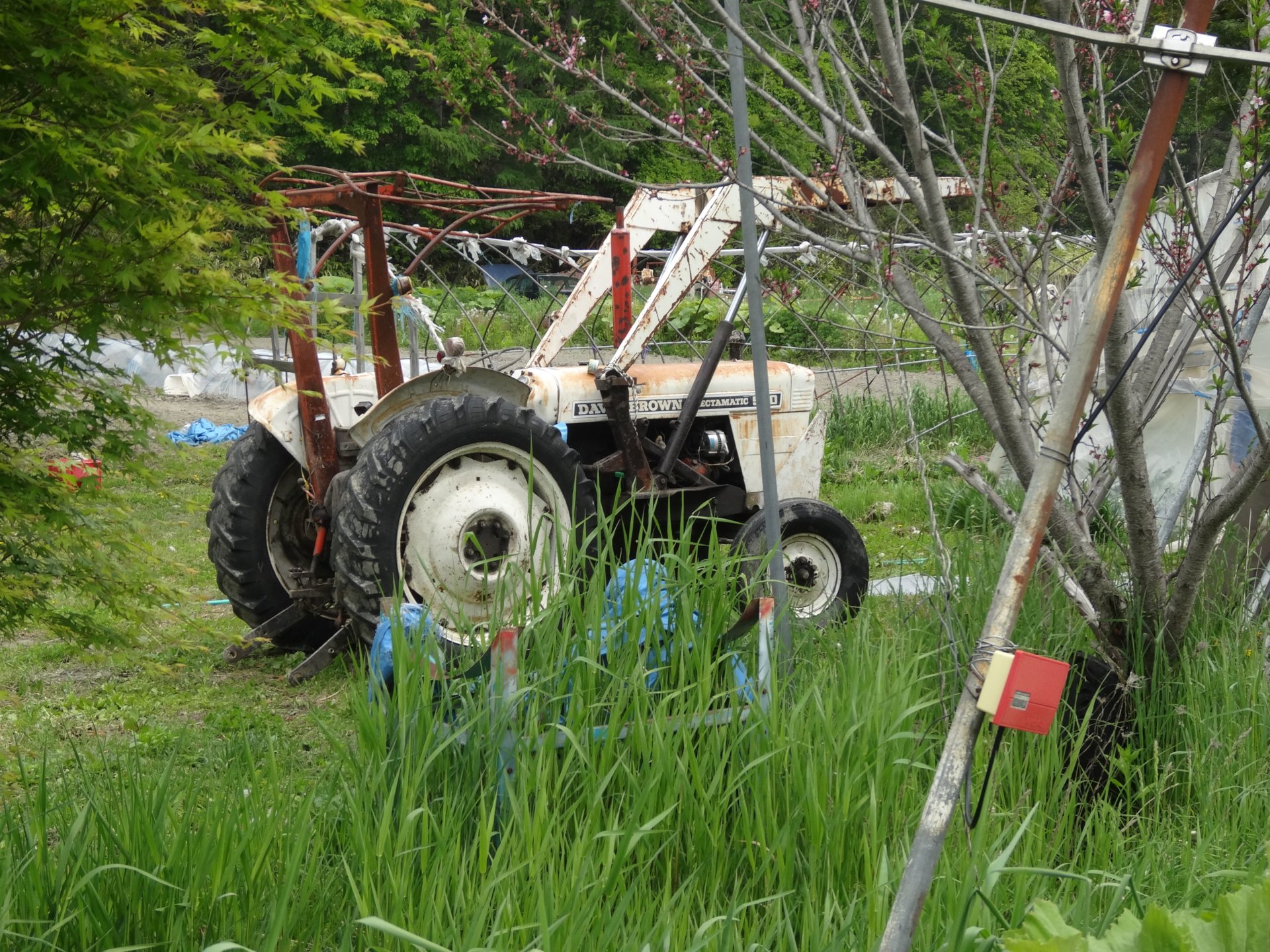 There was a 1200 parked behind a greenhouse, but I could not get a good shot of it.
They appeared in very good order.
Will try and sort a few more pictures out.

Absolutely correct, as an ex dairy farmer in another life, I should have spotted the symptoms straight away
I did not connect till too late, I was only waking up after the first coffee stop. This was normally quite soon in the day, since most of the hotels do not do coffee and in Japan all the 7/11 corner shops sell a decent cup, and more importantly for me cakes.
The only thing about the coffee was that if they did not do fresh coffee, they would sell it in tins or bottles hot or cold. Some of these brews were very drinkable, some only if you were desperate for the caffeine.

Exfarmer said:
Absolutely correct, as an ex dairy farmer in another life, I should have spotted the symptoms straight away
I did not connect till too late, I was only waking up after the first coffee stop. This was normally quite soon in the day, since most of the hotels do not do coffee and in Japan all the 7/11 corner shops sell a decent cup, and more importantly for me cakes.
The only thing about the coffee was that if they did not do fresh coffee, they would sell it in tins or bottles hot or cold. Some of these brews were very drinkable, some only if you were desperate for the caffeine.
Click to expand...

A tip I was given when I cycled a lot was Ginger jam. settles the stomach & provides much needed energy 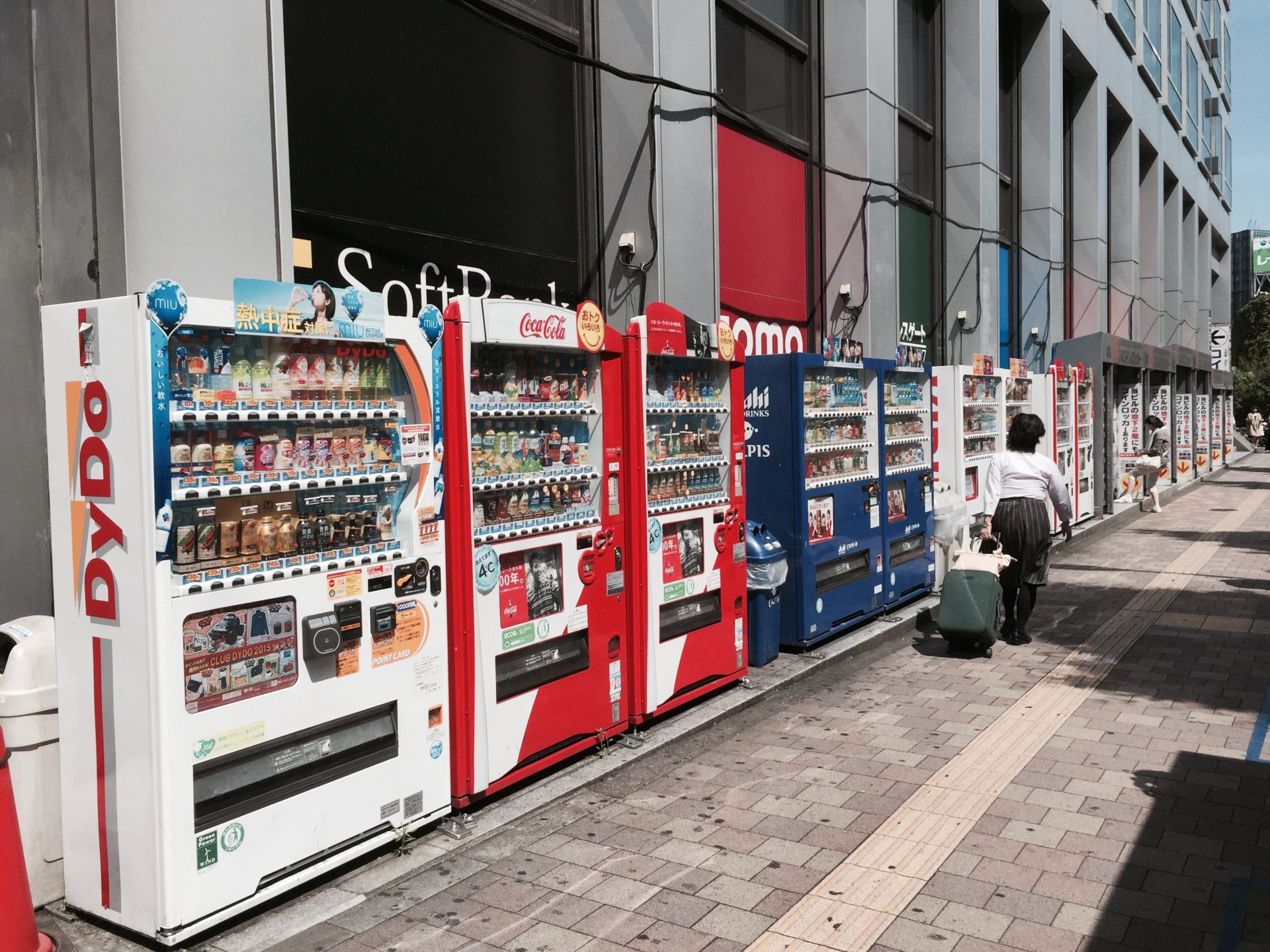 This is outside Shinjuku station where you could buy just about any type of drink you wanted, from water , coffee, beer, cola, to Sake!
However this one in our hotel was offering the local delicacy, can anyone guess, it is refrigerated. 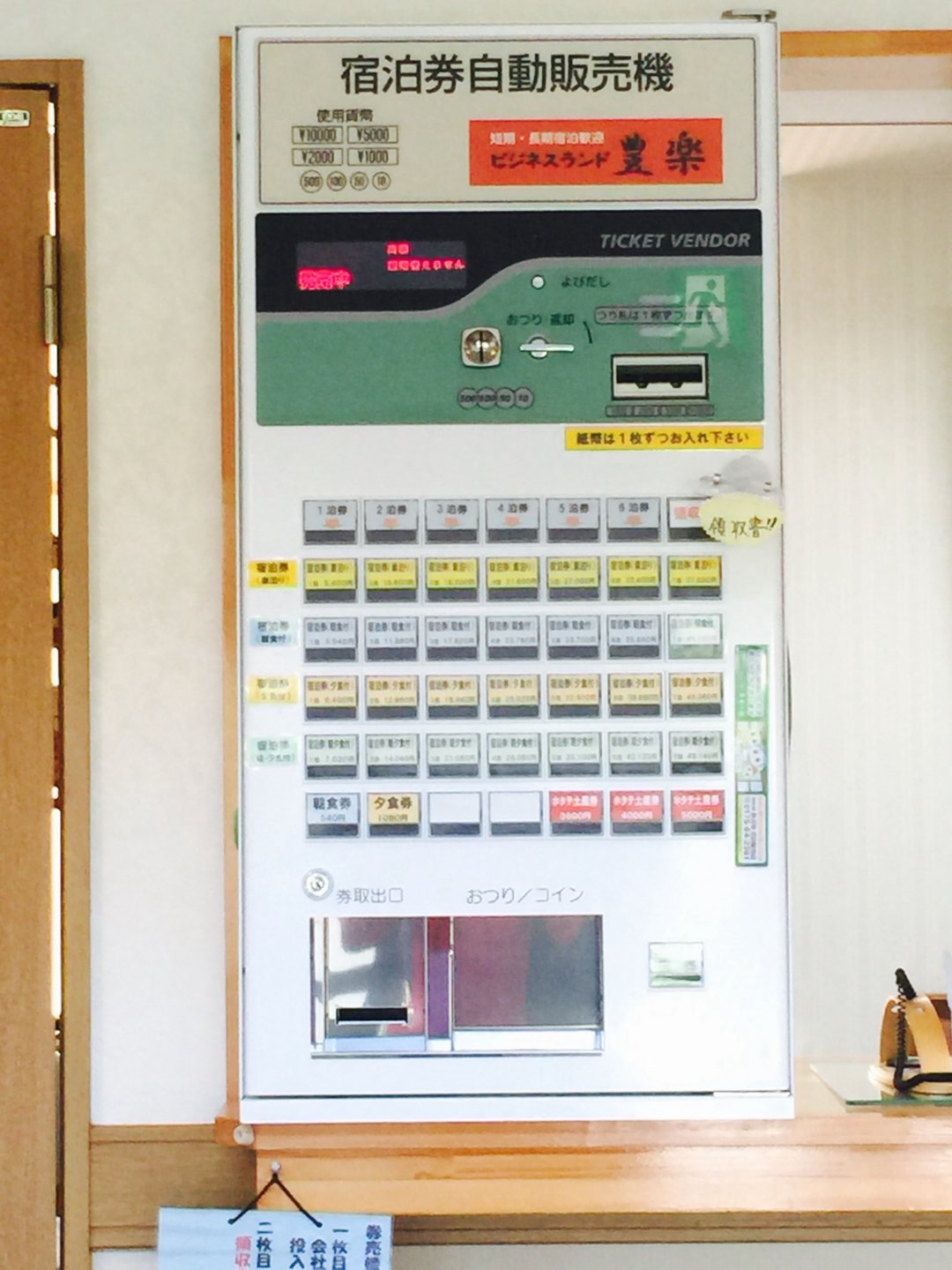 sorry far out no type of Rice cake

Exfarmer said:
sorry far out no type of Rice cake
Click to expand...

I cheated by googling.

some kind of sea food?

Yale said:
I cheated by googling.
Click to expand...

Ktwo are a leading British manufacturer of farming machinery and they have now secured a 5-year export partnership to continue to serve their growing audience across North America.

Ktwo saw an opportunity in the North American market for strong high-quality agriculture trailers after being approached by several companies across the US and Canada in early 2020. They needed a manufacturer with the capacity and experience to fulfil their need for strong, large silage trailers to hold volumes up to 75m3.

“We see big potential for our machines across North America,’’ explains Robbie Polson, Ktwo managing director, ‘’and we are very pleased to announce we have secured a...
News
Continue…
Top