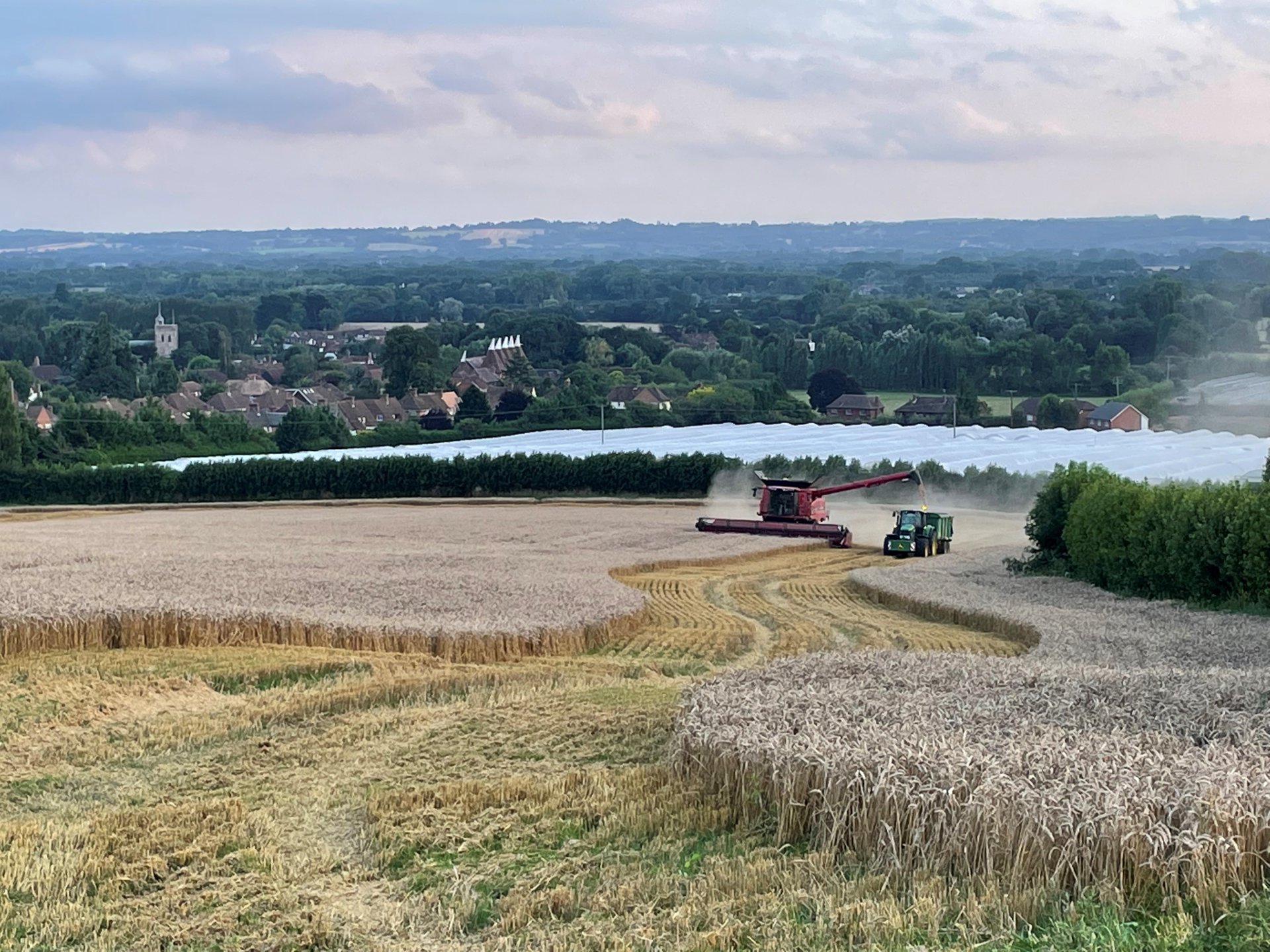 The good the bad and the ugly!

As I sit here on the 30th November furiously tapping away to get this written for tomorrows deadline I reflect on what has happened since I last wrote.

My last piece mentioned how well the crops looked before harvest! How things have changed in just those few short months. The price of wheat, fertiliser and machinery (if you can get it!) have shot up which is encouraging for those who still have wheat to sell and who bought their fertiliser early!

I also mentioned the upcoming Groundswell Show which has now been and gone. For me it was a fantastic day (I only went on day 2) bumping into old friends from college, Nuffield, Worshipful Company courses and from interactions on Twitter! I was surprised and dead chuffed to be awarded the Soil Farmer of the Year at Groundswell which has landed me a couple of speaking engagements over the coming months.

I’ve titled this article “Good, Bad & Ugly” as for me that’s what has summed up the past few months. Looking through magazine articles recently they all seem to feature farmers, growers and advisors who get it right every time and never make any mistakes. They all grow 16t/ha of full spec milling wheat and sell it at the top of the market having bought all their inputs at the lowest price. Their farms are all ring fenced with big open fields and theres never any misses in their drilling! Unfortunately, that’s not the reality in my experience and i wanted to just show some of the ways in which we have learned from our mistakes. So, here’s goes!

For me this year I’ve been thankful for a healthy family particularly during the ongoing pandemic. Our 4 children are now at 4 different schools which makes our travel logistics challenging. We have also been blessed this year with fantastic harvest labour on the farm. A call for help on twitter resulted in just the right person coming forward who was keen to learn and competent to get the job done. He had farming experience, was well mannered and was quick to learn (he also played hours of FIFA with my boys!!). Having never drilled a field before we set about throwing him in the deep end and he drilled almost all of our cover and catch crops this year as well as barley wheat and beans. I’m sure he will read this so thanks Jonny, top job! We also had help from Ellie, a student who was keen to learn and did an outstanding job carting grain through our narrow and winding lanes and helped with muck & compost spreading too. Nick was our final part time helper who jumped on a tractor when we were hauling back from the farthest fields and with cheerful confidence managed to get the job done.

Another “good” was the ongoing relationship that our “Nutters” group continues to develop. Having likeminded farmers locally that we can bounce ideas off, meet up with and critique each other’s ideas is incredibly valuable. I’m thankful for everyone of them and having local groups of farmers all looking to improve soils and reduce inputs is something I would encourage you all to try to set-up or become part of. 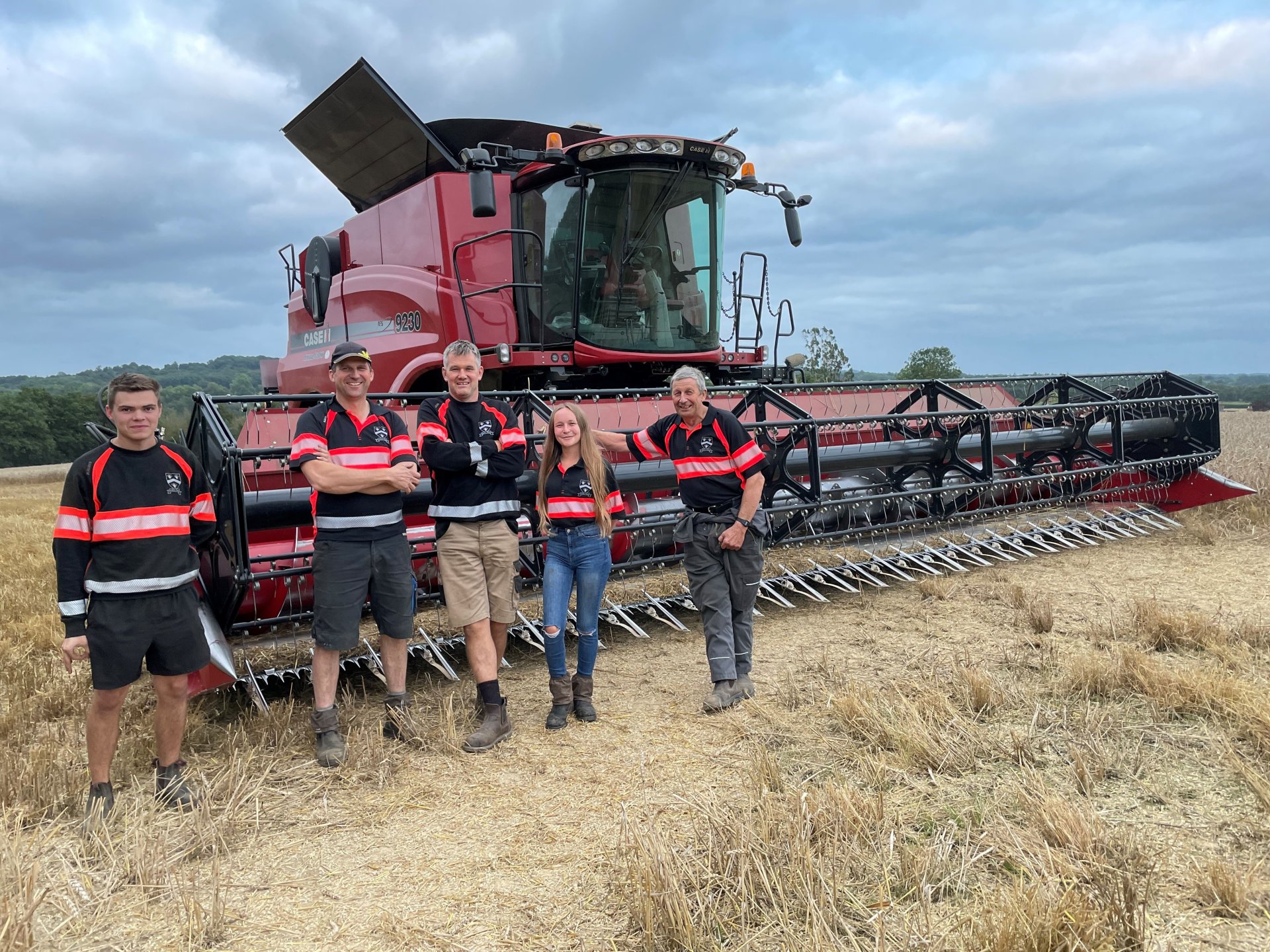 After many years of friendship and reliable service our independent agronomist, James Rimmer, decided that Norfolk was a nicer place to live and at the end of harvest we said a sad good bye to him walking our fields. It gave me the opportunity to evaluate where we were going and rather than just accept James replacement, we looked at alternative options and employed the services of Edaphos & Mike Harrington for all our agronomy, soils and nutrition advice.

Just last week we hosted a brewing day on the farm where Mike, George Hepburn and Nick Woodyatt from Edaphos spoke about biological brews and some of the pitfalls with No-till/regen-ag.

We have also taken the opportunity to try a Horsch Avatar single disc drill and a Horizon drill this autumn. Both drilled winter beans into wheat stubbles and we were impressed with the job that both drills did. With our expanding acreage and the addition of more contract drilling this year we are finding that our cross-slot drill is struggling to get round the fields in the short drilling window that suits it. 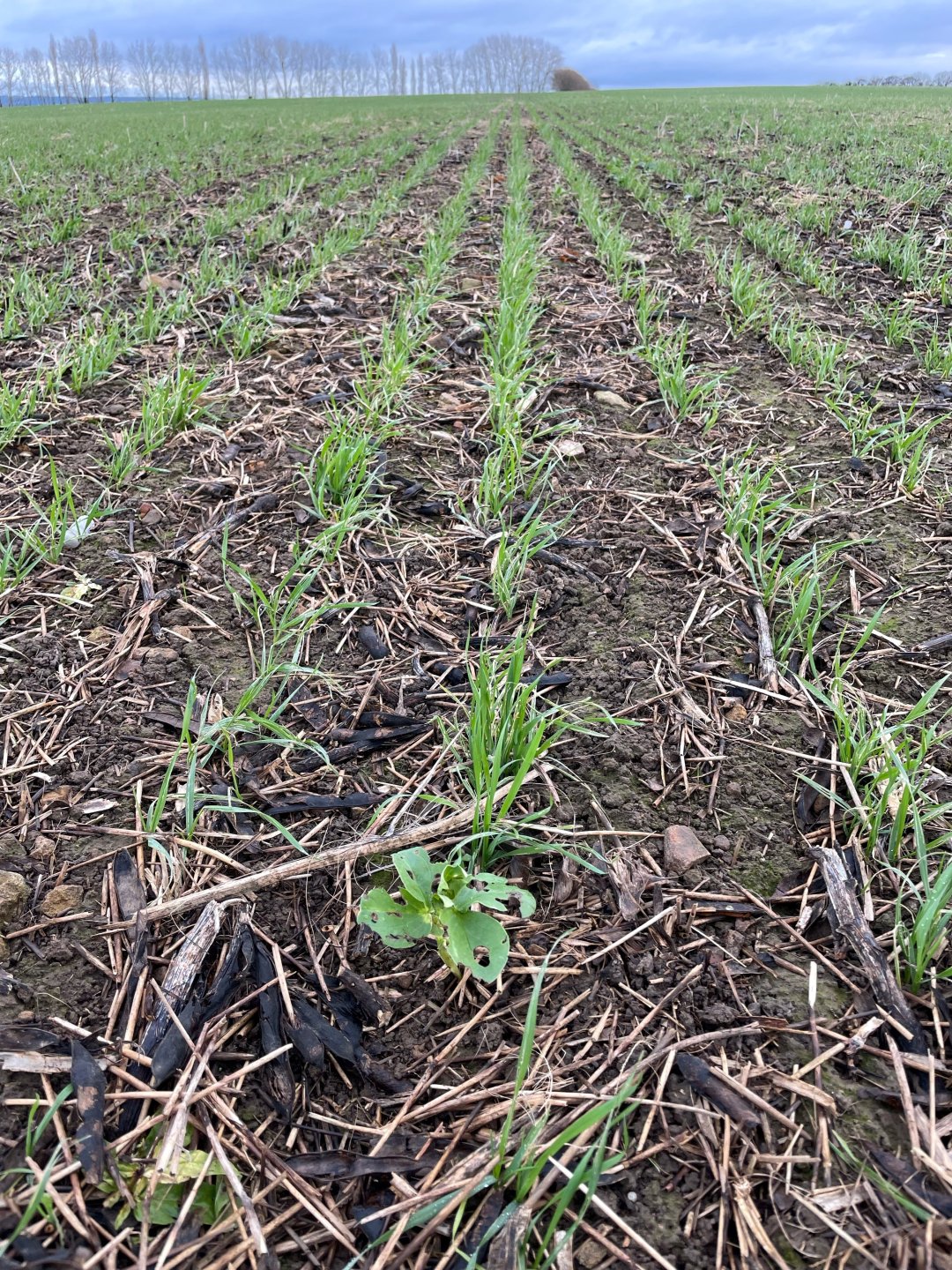 We are now collecting compost from a neighbouring soft fruit farm which we will apply next harvest. We applied compost to a lot of our newly acquired land this year and along with chopping the straw, growing cover crops and a more diverse rotation we are hoping too improve the soil and its ability to hold water particularly in the late spring and early summer when our soils can often dry out.

So what was bad?

I got COVID! And so did my wife AT THE SAME TIME!!!! It’s now 4 weeks after we both tested positive and i still can’t smell anything and taste is not back to normal.

Harvest weather!! After what looked like it would be a bumper harvest in May, the summer really failed to deliver any real meaningful sun or heat. June, July and August can be described as dull and overcast in the main and the deluge of rains we had during haymaking kept soils soft and moist throughout most of the harvest period. We cut hardly any of our crops dry although quality did remain largely good. Fortunately, we are members of Weald Granary which is a farmer owned co-operative grain store locally. They were able to take additional tonnage due to the lower harvest yields locally and have been an absolute God-send in taking all the damp grain that we harvested. 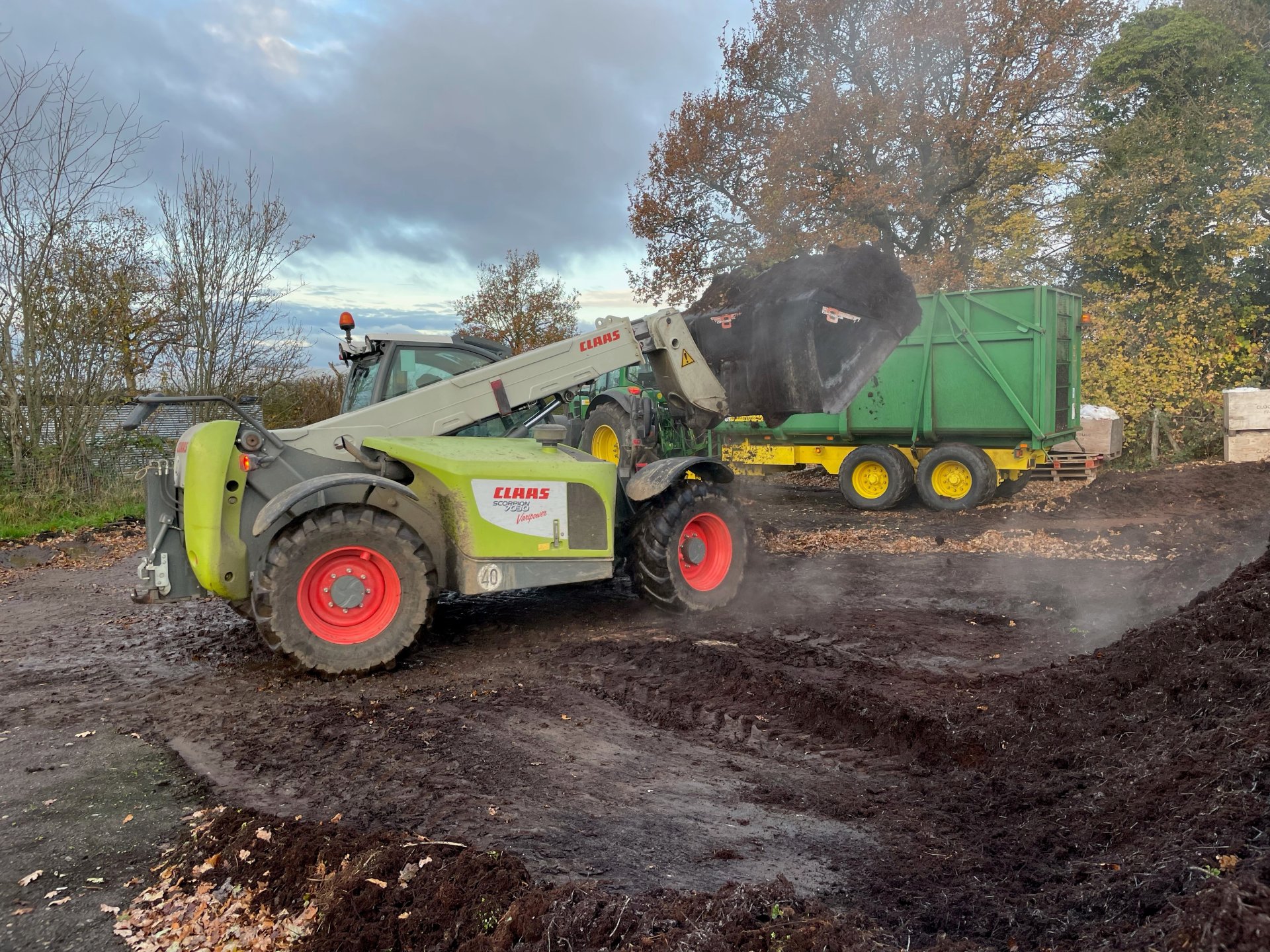 With the damp and late harvest, we found that chopped straw didn’t break down in the same way as in previous years. This has resulted in high slug populations this autumn and tricky drilling conditions. Cover crops have also really struggled to get away. Admittedly they were planted in the second half of august and had 65mm of rain soon after, but they have been hammered by slugs and the stripes in the stubble created by the drill remain to this day! I still maintain the view that cover crops need to be drilled early and need sunshine!

Well, drilling beans with a no-till drill in late November into sticky clay is not the most enjoyable job and I look forward to unblocking the press wheels on the back of the cross slot as much as a Red Tractor audit!! The beans are drilled, all 20 fields of them, but I’m not sure we’ve made the prettiest job. A bigger drill would have allowed us to plant them all in October when ground conditions were that much dryer. We certainly learn from our mistakes!

The coming weeks and months will see us busy with logs, workshop maintenance, some meetings and the annual BASE conference which I’m attending this year. We are also looking to simplify a number of our grain stores with old bins and drying tunnels being removed to aid harvest logistics going forward.

Can I finish by wishing you a very Merry Christmas and a Prosperous New Year.
Click to expand...