Harvest 2021 was the second in succession where the combine saw no rapeseed through its 12m header. At least this time it was planned, as not an acre was planted following the 100% loss of our 2020 crop. This we redrilled with Linseed after finding most of the stems were infected with CSFB larvae in the spring.

The 2020 loss underlined and reinforced the importance of our low stakes approach to growing this high-risk crop. At the point of redrilling the area with spring linseed less than £25/ha had been spent, with farm saved seed and herbicide being the only input to that point. I have spent as much on over winter cover crops in the past, and although OSR is not exactly the best of cover crops with its lack of mycorrhizal fungi association, at least it had been capturing important sunlight and water helping build organic matter from its August drilling date until its destruction in April.

Up until 2020 we had got away with things as far as CSFB was concerned, and we had been getting decent yields at low costs. I had seen growers further south and east lose crops to the beetle following the neonic ban but until that point crops in our area seemed to escape relatively unscathed. I had started to wonder if our more diverse farming system, which at that point had used no insecticide at all for 10 years, could be the reason. Had IPM built us higher beneficial populations that were keeping the beetles and other pests under control? Was improved soil health leading to improved plant health, making the crop less attractive to pest attack? It could have been a great story, but sadly the 2020 loss didn’t have the hoped for happy ending. 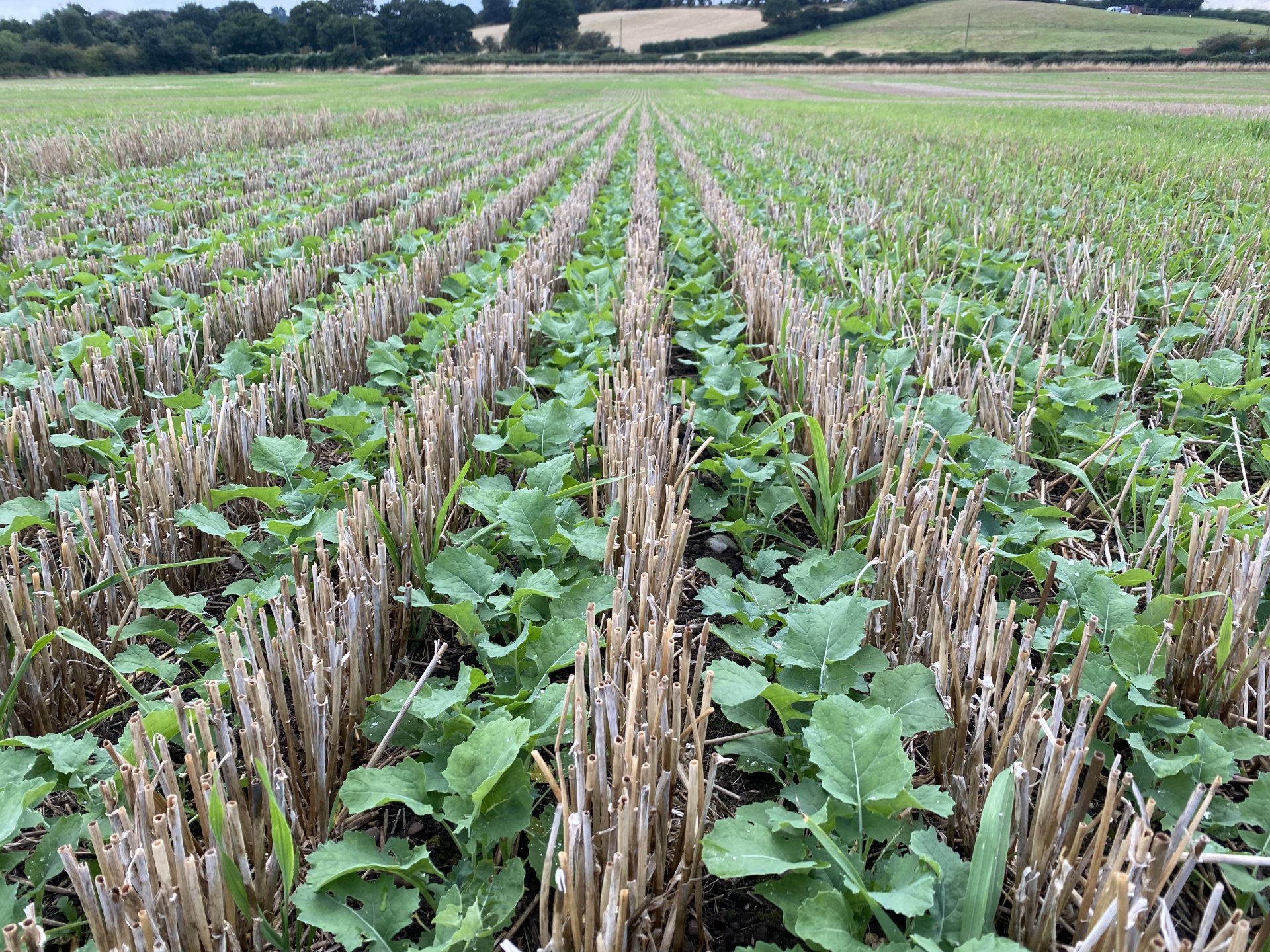 Near perfect establishment for 2022

Stopping growing OSR is an easy decision to make, but what to replace it with is a whole lot more complex. There is not exactly a great choice of consistently viable break crops, and importantly markets for them, suited to UK growing conditions. Our cropping is already quite diverse and depending upon markets and suitability of land break crops have included winter beans, spring beans. spring oats, spring linseed, lupins, millet and even peaola (a pea and spring OSR companion crop). All have their pros and cons, but all are far less consistent than the cereals. These break crops have yields which are far more weather dependant than agronomic genius, they suit our low input, low risk approach meaning that even in years where yield are disappointing the margins are rarely negative.

Our farm business has really focused hard on minimising fixed cost structure and a big part of that involves spreading labour and machinery over as long a season and as large an area as possible maximising use of available resources. The OSR crop was valuable in getting a good chunk of drilling out the way early, easing workload peaks for crop protection and fertiliser application and most importantly of all providing us with a reasonable area of early combining before the main event that is wheat harvest.

We needed a replacement that shared some of these logistical characteristics and grain rye seemed to a good fit. We had been involved in some trail work for KWS a few years previously so had some experience of the crop and knew there was nothing particularly difficult about its establishment, agronomy or harvest. The market for grain rye was all that had really held us back from growing at scale in the past so when I learnt that £30 below feed wheat contracts were available we decided to give a couple of hundred acres a go.

Hybrid varieties bred for grain and better standing characteristics seem to have developed rapidly in the last few years. They can be drilled early, and harvest is early. Seed was expensive (especially for a farmer used to farm saving nearly all his seed!) but with nitrogen and crop protection costs significantly lower than wheat it’s a reasonably cheap crop to grow. The lower Nitrogen requirement is particularly attractive as synthetic N is not beneficial to soil life or environment, anything we can do to reduce its use can only be a good thing, especially with nitrogen prices at present. 2020 is the first year we have sold our carbon sequestration via the brilliant Gentle Farming platform and the lower N use directly reflected in a lower carbon footprint that in turn gave us more ISO certified carbon certificates to sell.

Straw yields are high, at least double that of wheat so if trying to increase a soils organic matter content rapidly it’s a great solution. What I found most remarkable was its use of water. The crop came through winter well and received its first split of nitrogen and growth regulator in late February. Then followed a very dry spell from mid-March, soils dried out quickly and wheat and barley crops were showing signs of drought stress. One of our rye fields had a lot of volunteer wheat in it, and the rye had developed more biomass so you would be more affected by the dry conditions. However inspection of the roots showed very clearly how much more efficiently the rye was using what water was available to it. The wheat roots were totally dry with no soil attached where as the rye roots were still surrounded with soil that was clearly still holding ample moisture, this could be a very valuable characteristic on our lighter soils where moisture often ultimately restricts our yields. 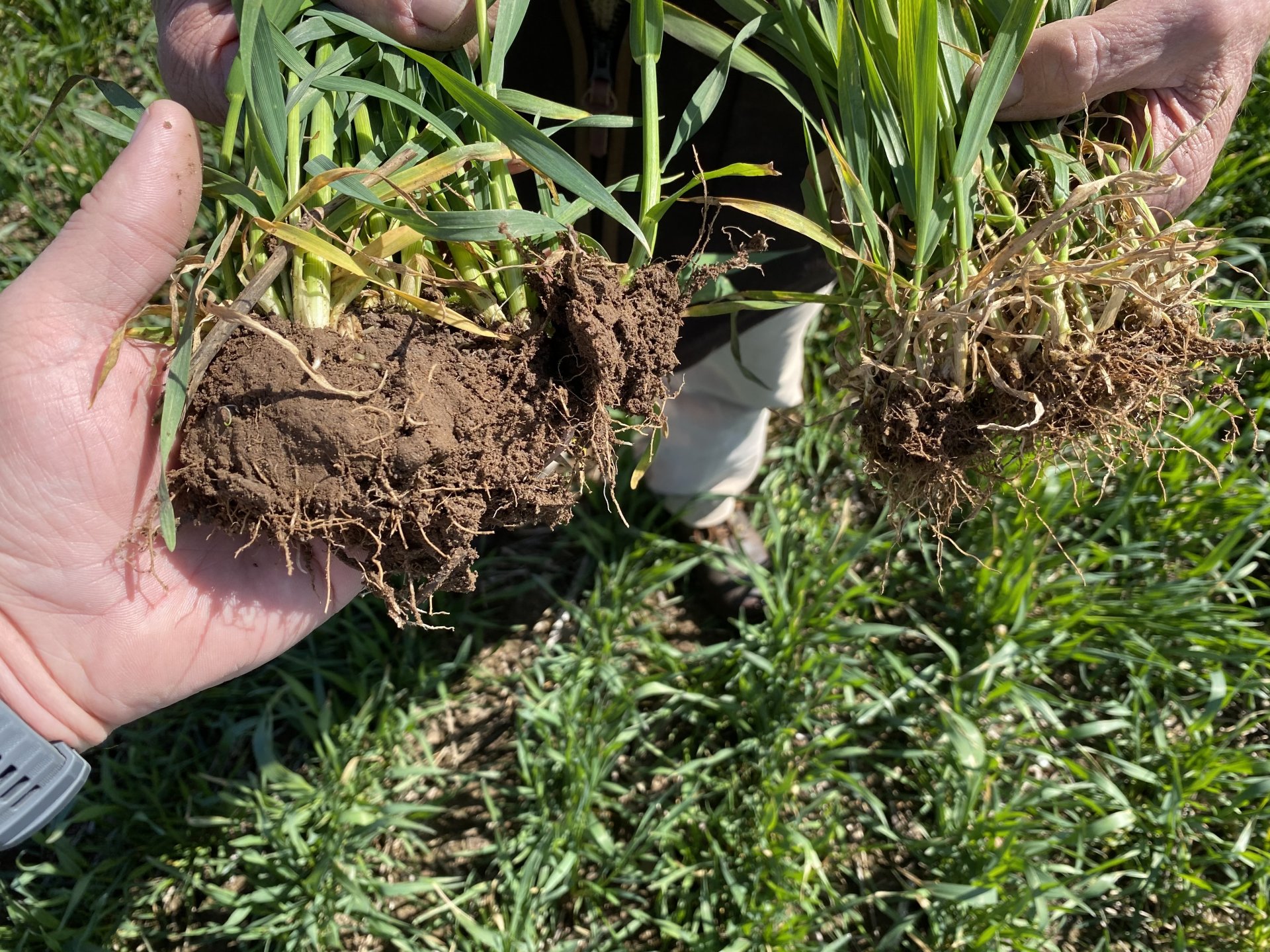 Rye yields were claimed to be above those of wheat, but in this first harvest here we found it has averaged about the same in a year where our yields have been in general very good. With the lower growing cost and lower sale prices considered I think the gross margin calculation will be similar or possibly slightly lower than our first wheats but similar to second wheat this season. If in future seasons we can access the higher than wheat yields that are claimed (and I think we would see these in a more moisture restricted season) then it could possibly equal or even better first wheat margins. Year one of a new crop is always a steep learning curve and I sure we have plenty of room to improve !

Happy as I have been with rye its not a break crop so doesn’t really replace the losses of rapeseed to the rotation but as a crop that doesn’t suffer from Take-all I plan to grow it continuously on a couple of blocks of land and have doubled the acreage this year. I hope we will see rapid increases in soil organic matter and will monitor this carefully.

With an area of winter barley harvested in late July and this most valuable of straw baled and removed quickly in ideal, dry conditions I just couldn’t resist entering the OSR lottery again for harvest 2022. We had a tonne bag of farm saved seed kept back, now 2 years old that was quickly germination tested and direct drilled along with 30kgs /ha of placed DAP fertiliser using our Horsch Avatar drill on 250mm spacings. On the 10th of August in near ideal conditions we nudged 125mm on our 12/36m controlled traffic farming system to place rape seed directly between last seasons 250mm stubble rows and held our breath.

The results were as perfect as we could wish for and by September 1 we had a near perfect looking crop of OSR, free of CSFB and slug damage all at low stakes of under £10/ha spend. Will it make it to harvest 2022? Well, that’s still in the hands of pigeon, slug, CSFB larvae, hail, or any of the other many things beyond our control that make this crop the arable farmers equivalent of keeping sheep. Oh, how I have not missed this crop! but I can sleep well knowing that if it does ultimately fail it will at least fail cheaply !
Click to expand...