First ever attempt at Opening - rate my first go

So I ploughed when i was younger but it was always after my dads worker had started the field off(trust a 10yr old to start?) . 23 yrs later I found myself pulling the old ransome plough out the hedge, actually that happened a year ago to sell it. Ended up putting new points and wings on to plough some ground going into some environmental schemes.

I was told our tractor is to big for the 4 furrow ransome but i pushed the plough over on the cross shaft and tinkered about and its usuable however im not making the most out of the tractors traction because its off centre...a bit more fuel is cheaper than buying a new plough.

This all happened a bit last minute. We wanted to spray the field off first but that didnt work out. So first ploughing in established grass about 6 inches long lol.... This should be funny
Equipment 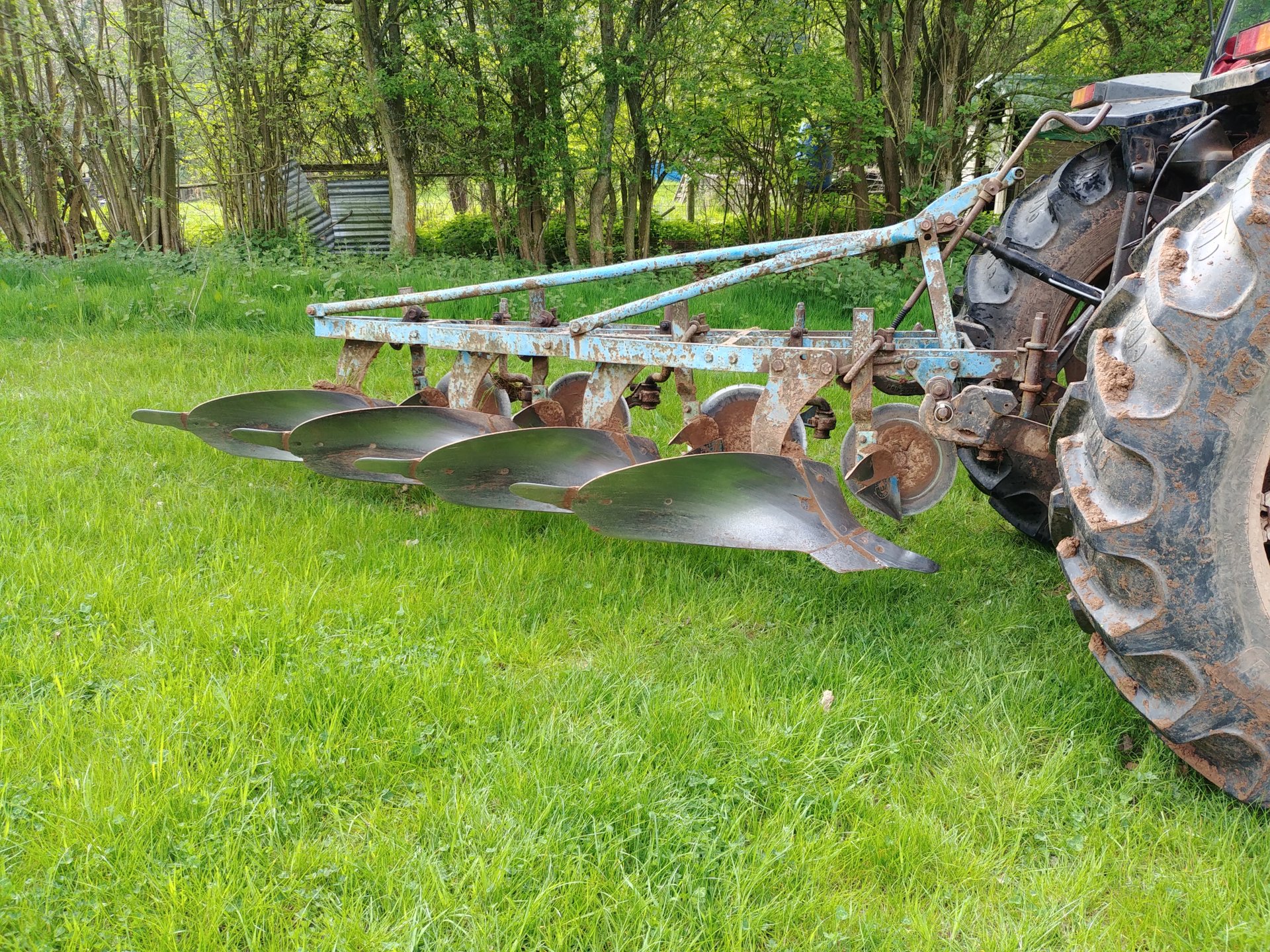 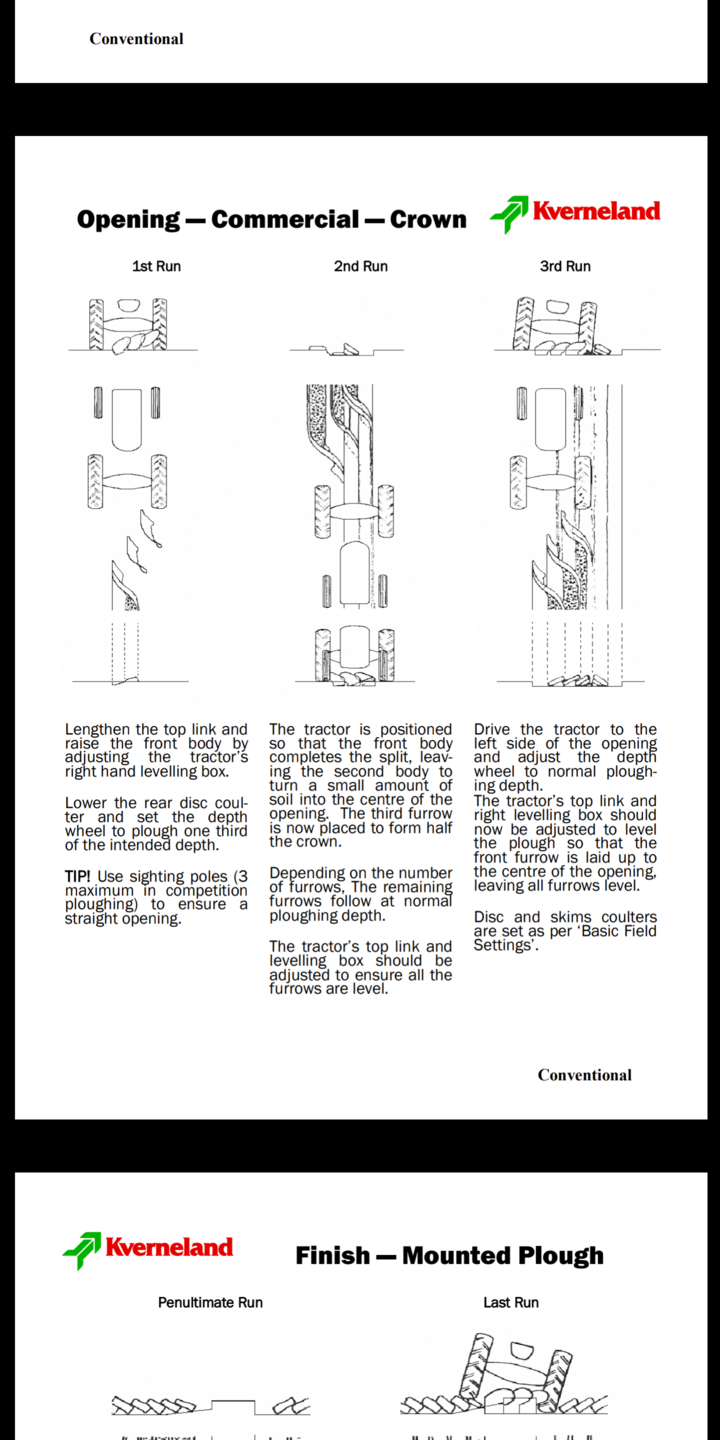 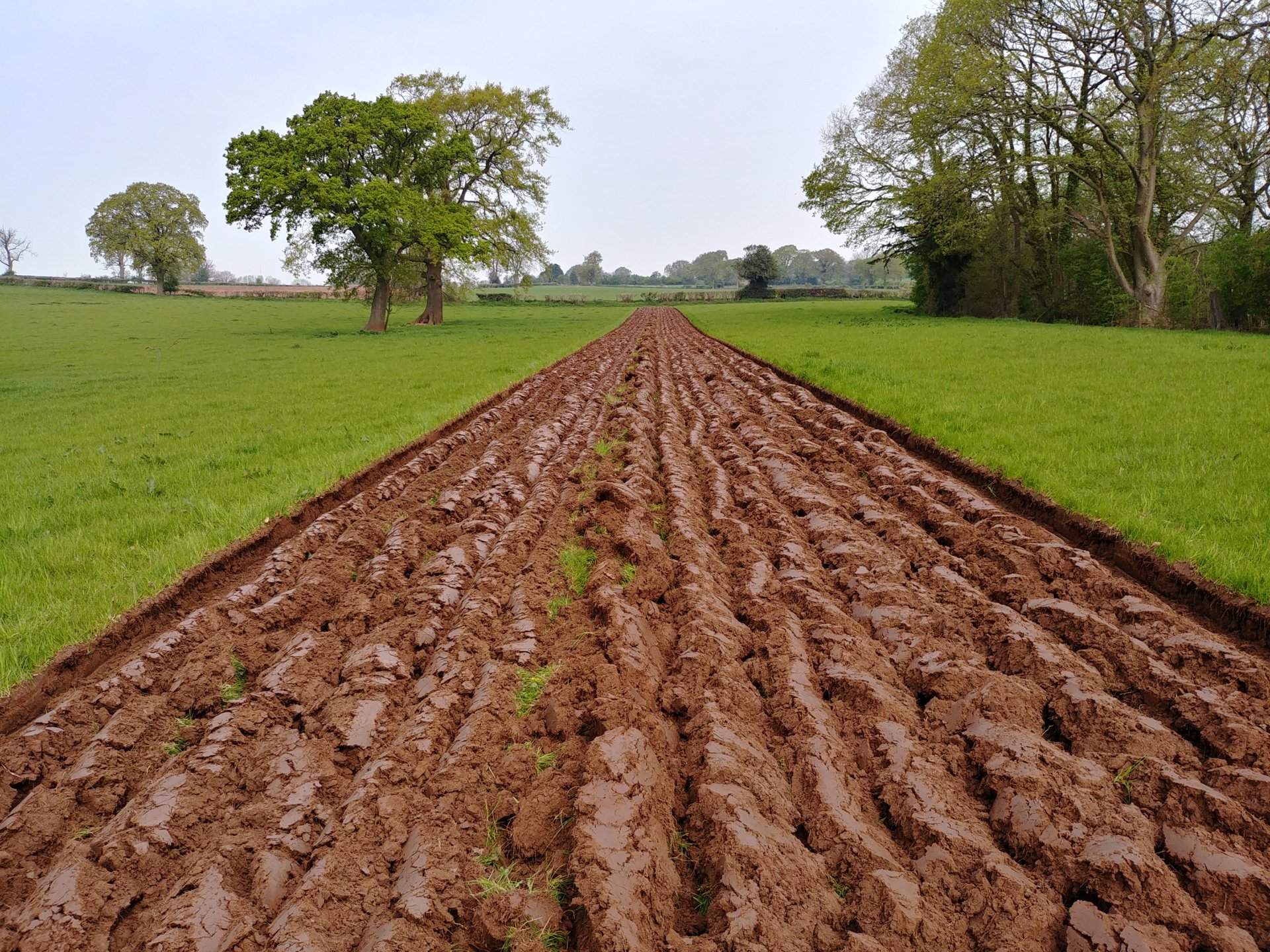 I have no idea if the is good or bad. I felt happy most of the grass appears buried. My second pass is the most difficult to get right as i have no decent guide as to where to position the tractor. 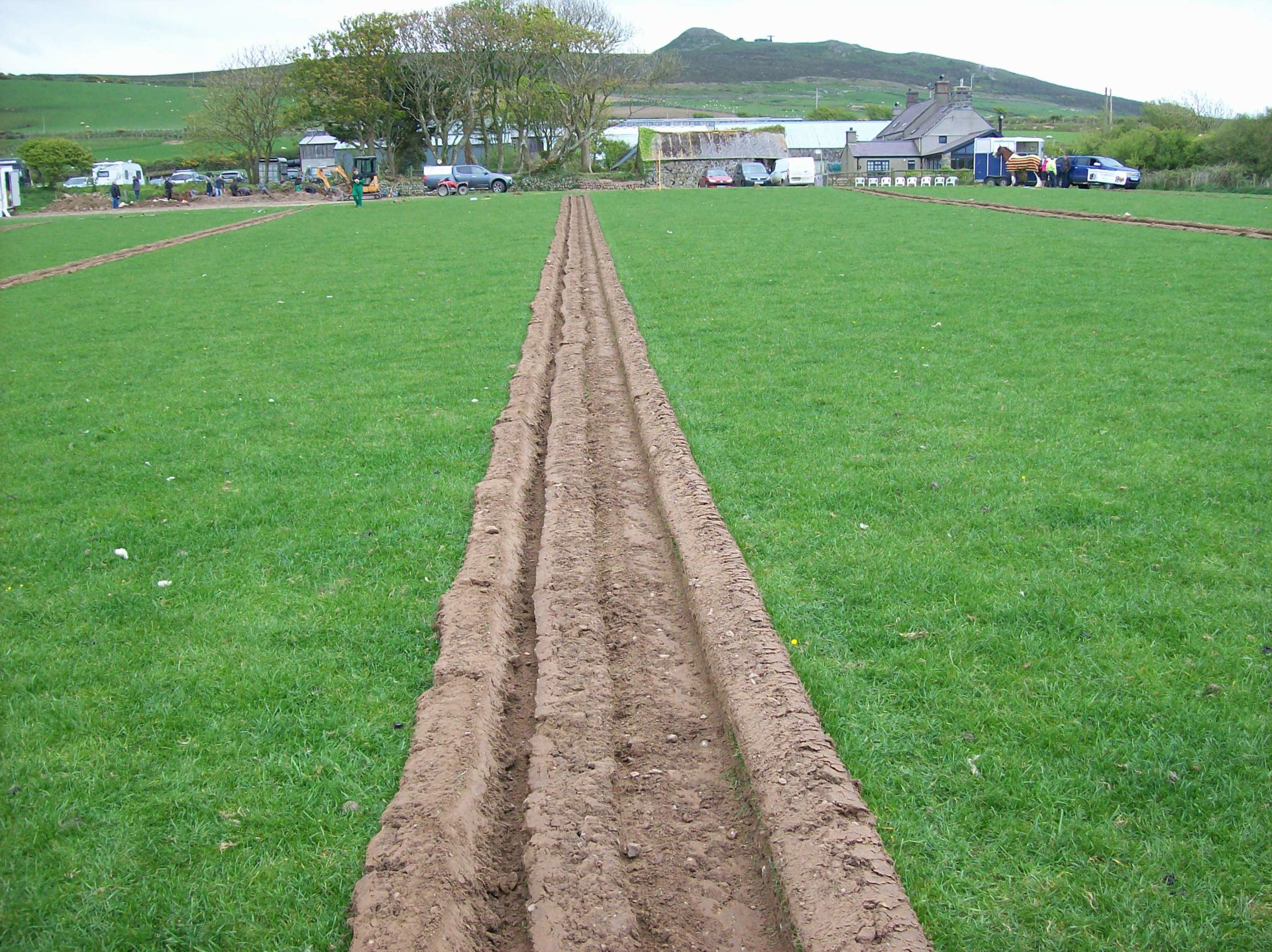 MMMMM,
well, unless your doing world style match work, there is no opening as such on grass. Easiest way I found was to plough the first run with a very light front furrow, then. on the return place the tractor wheel on this and plough a slightly heavier front on top. Result should be almost level, and be well sealed to stop regrowth.
If you want a drive, go to Sarn match on Sat, thats on grass.Photo is a World Style grassland opening.
Last edited: Apr 24, 2019

Im not sure if im using the correct terms...The theory of what i tried makes sense but getting the depth right on the first two passes seem the most critical. Seems tricky with a 4 furrow to get everything right and having 4 pairs of eyes infact 5 to straight ahead.

Good day out, and much to be learned.(Even new words to describe the respect people have for the stones)!

As long as you enjoyed yourself and you got the land into a state where you can work it then you achieved your goal. In doing so you saved another plough from being scrapped.
As for the quality of work then a couple of the legs looked to have had a bit of a rive. Up against it on that tractor with those tyres no matter how far it goes across on the cross shaft. If you were using it commercially your landsides would be scrap in a very short while. As a consequence the board will be running at too shallow an angle to the direction of travel and will not work as they were designed to.
Discs need careful attention to setting, as do the skimmers once the discs are set. Try and avoid overskimming as the furrow will rock on the skimming and it will be impossible to close it up. No substitute for experience on this one as the more you skim the less soil you will have available.
In an ideal world, when looking at conventional ploughing, it should not be possible to tell the number of furrows on the plough it was done with and should look as the whole piece was done in one pass.
Don’t fret over the work you have done. A lot of people been going to matches for 20 odd years and still can’t get it right!

no need ta get bleddy personal

Lol no worrie i like all the pointers amd criticism.
I thought it was way too complicated to set up however initially but once you get going you watch the plough working you soon see what everything does.
Initially i had the skimmers on furrow1, 3 and were too shallow and every so often a small line of grass was still sticking up. I then made Skimmer 1 too deep and was practically ploughing. Skimmer 4 actually is quite worn but i had to get on with it as it was.
Definitely the landslides are taking some abuse. When the plough engages i have to drop it deep to get it to go into the work. If i dont do that the plough just pushes away from the plough ground and look like someone spreading butter on toast with wavy lines lol. My front tyres are 13.6inches and the rears are a little bigger and i have to drive away from the edge about 1-2 inches therefore the first furrow is being dumped into a crater lol but its likely the front furrow is actually being force to turn over a little more than 12inches.

All that said im relatively happy with the results. Most of the grass is inverted and buried with no spray used so the greens are happy or maybe not now soil structure is now so precious(we cant win).
In total I ploughed 24acres on 3 fields in 2 3/4 days and about 210litres off juice (not cider) on not sqaure fields, awkward shaped fields! A lot of reversing finishing off fields which you wouldnt get with a reversible well not quite as much.
On the straight running i worked out on my phone app i was doing 1.45 acres an hour. Headland ploughing about 0.5acre and hour...painfull. You finish the main ploughing and think you are done but it takes ages finishing off!!
We are never going to plough more than what i did so i makes sense to keep the plough for the rare occasion. I am rebuilding a 4wd UTB (Universal) 550 65hp. I wonder if that would pull the plough. I still admire that the plough was bought by my dad in the 70s and it was about 20 yrs old then lol. Have we gone new kit crazy??? Probably not.....
There is something incredibly satisfying about ploughing... 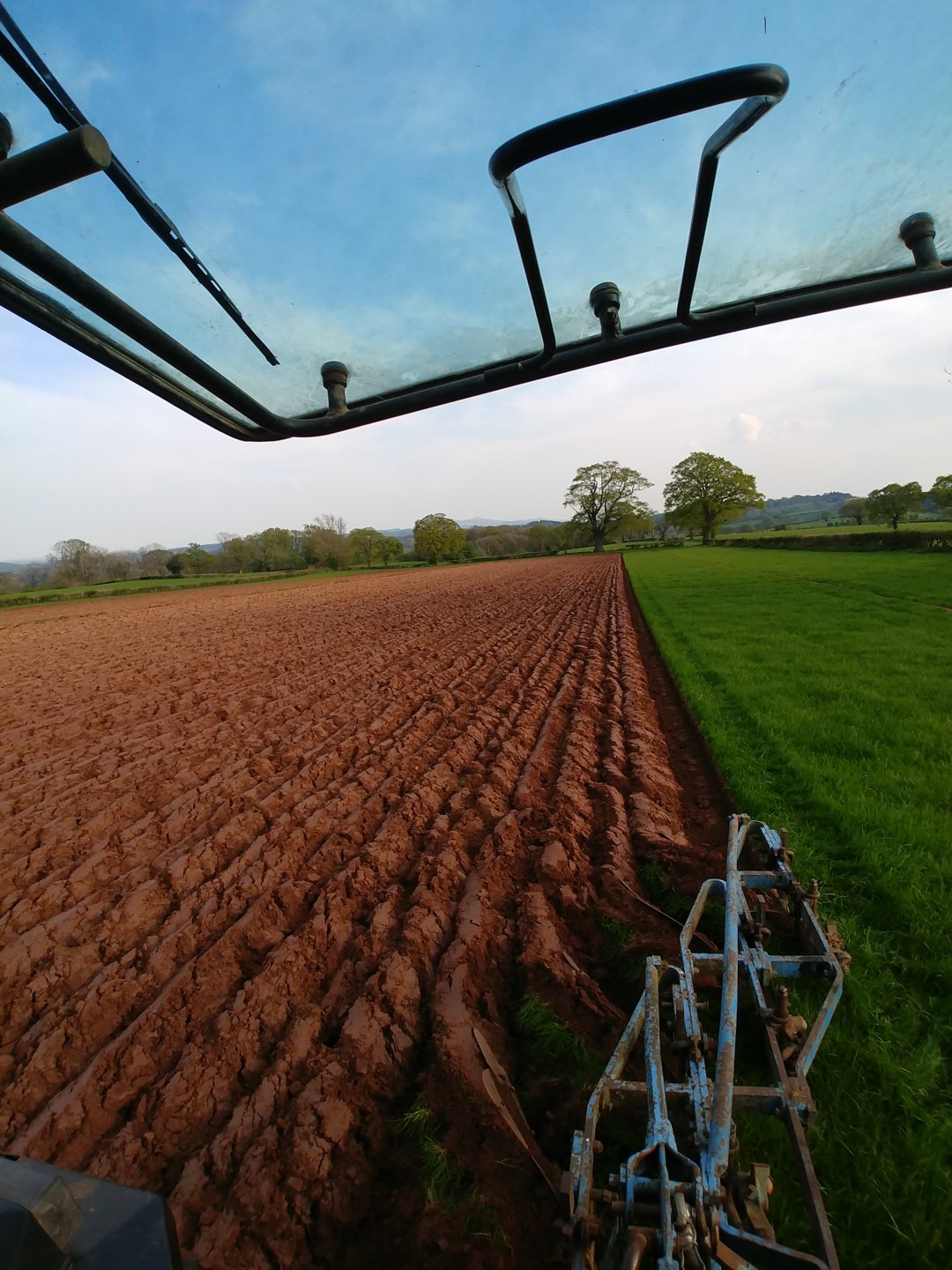 Location
The dark side (of the Blackdown Hills)

Well done @jd24 , I've also been trying to teach myself the art of ploughing! I'd be well chuffed if mine looked as good as your photo above!

Have been out and tinkered with my skims this evening. Don't know if it'll help but I guess that's how I'll learn!

Slippery Slope said:
Well done @jd24 , I've also been trying to teach myself the art of ploughing! I'd be well chuffed if mine looked as good as your photo above!

Have been out and tinkered with my skims this evening. Don't know if it'll help but I guess that's how I'll learn!
Click to expand...

Thanks that photo was taken in the straightest field. Nice and long with only a few bits where i had to reverse a few times. Going back to the skimmers I read somewhere the skimmer should lose paint on half of it from the point , Less than that drop it down. If the whole skimmer is being cleaned then its in the work too much and it should be lifted up, Is the right???
The points were only cutting about 6 inches and my discs about 2 inches. I also read discs should be 1/3 of you points depth. On our plough there is also a bolt to adjust the angle of the skimmer....not sure about that.

Skimmers should do as Their name suggests, just skim the trash into the furrow bottom.1/3rd of working depth is a good starting guide, but it depends on the conditions in each field.

As for the angle of skimmers, you want the skimmings in the furrow bottom, not up the back of the previous furrow.

Location
The dark side (of the Blackdown Hills)

Mydexta said:
Skimmers should do as Their name suggests, just skim the trash into the furrow bottom.1/3rd of working depth is a good starting guide, but it depends on the conditions in each field.

As for the angle of skimmers, you want the skimmings in the furrow bottom, not up the back of the previous furrow.
Click to expand...

This was my problem. The furrows weren't flicking over enough for my liking and leaving a lot of turf stuck out. Haven't got back to the field to see if my tinkering has worked yet though.

You seem to be making a cracking job of burying all the grass. have you sorted out no3 furrow?

It seems to me that the third furrow skimmer is running too far to the land and cutting the top of the furrow. Is this skimmer leg cranked differently to the others because the position on the beam is very different.?

arcobob said:
It seems to me that the third furrow skimmer is running too far to the land and cutting the top of the furrow. Is this skimmer leg cranked differently to the others because the position on the beam is very different.?
Click to expand...

It was way too deep. It was hot to touch!

With such beautiful soil as that I am sure you could get it ploughed for free, know many a ploughman who would love to plough that! Guess Worcestershire way looking at the colour of it?

Hi Was looking at the picture of your plough first picture think the problem with the #3 furrow is disc is in the trailing position not in a lead position like the rest of them . Just a observation from me . Mike
You must log in or register to reply here.
Share:
Facebook Twitter Tumblr WhatsApp Email Link

I am very pleased to bring you some positive news in these uneasy times. I firmly believe that there will be more such news.

FIGHT WITH COVID-19 AND KEEPING THE PRODUCTION PLAN

We were one of the first companies to introduce safety rules to protect our employees and regulations for the movement of visitors inside our premises and buildings at the very beginning of the COVID-19 pandemic. There has been a decrease in the production, or human capacities, due to the internal as well as...
News
Continue…
Top