Across most parts of Europe, favourable weather allowed a ‘fair start’ for winter cereal crops. However, there are concerns for frost tolerance, in particular, Black Sea winter cereals.

The latest MARS Crop Monitoring report released yesterday, stated sowing was either complete or mostly complete by early November in most European countries. However, the European Commission said some Black Sea countries (Romania, Bulgaria, and Ukraine) experienced a delay of a few weeks.

November saw above average temperatures and near average rainfall for central and northern Europe. This allowed favourable early crop development. However, western Europe (France is referred to specifically), saw below average temperature. This hampered early winter wheat development and meant only a few fields have reportedly started tillering.

In south-eastern Europe, particularly the Black Sea region, the end of November turned cold. This slowed development of cereals that were already planted late. Frost tolerance is a concern in this area particularly, as well as most parts of central and eastern Europe overall. Frost tolerance is reportedly ‘weaker than usual’ in these regions. This poses risk during winter dormancy.

In the majority of European Russia, hardening is reportedly more advanced. This means crops are potentially better prepared for winter dormancy. Whereas for areas in southern Russia hardening is weak.

Though frost tolerance may strengthen, before this, any sharp frosts may damage delayed winter cereals. 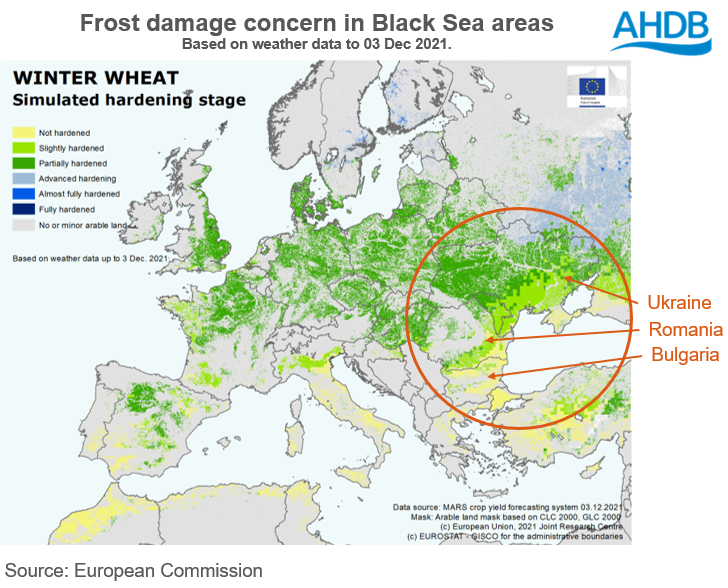 Why is this important?​

With a tight global wheat supply and demand balance, we are likely looking to next seasons supply to ease concerns. Prices are expected to stay relatively elevated until this balance appears to be easing.

Ukraine is a major wheat exporter. This month, the USDA increased Ukraine’s 2021/22 export forecast by 200Kt to 24.2Mt in their world agricultural supply and demand estimates (WASDE). This places them as the fourth largest global exporter of wheat in 2021/22. This means domestic production is important to global availability.

Romania too is a large wheat producer, accounting for 10.42Mt of EU-27 production this season (fourth largest) according to Stratégie Grains. Therefore essential to EU supply.

The MARS report states ‘colder-than-usual conditions’ are forecast for these south-eastern European countries, although the forecast is only to the end of the week. It is too early to predict impact on yields, though weather will be followed closely in these key regions. This is especially important given dry conditions have already made Ukraine and Russia watchpoints.