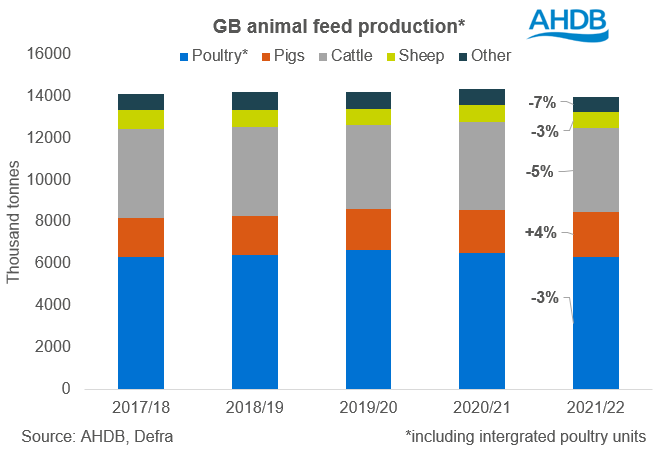 So, we have talked about what has happened, but now it’s time to assess what could happen this season.

As discussed a few weeks ago in an analyst insight, it is expected that animal feed production will continue to decline this season (2022/23), largely driven by the poultry and pig sectors.

In 2021/22 we saw pig feed production increase, but it wasn’t necessarily due to the sector ‘thriving’. Instead, it was as a result of pigs being unable to be slaughtered due to labour shortages, which led to animals being held on farm for longer. With backlogs now cleared or clearing for some and the rising cost of living influencing consumer demand, the UK breeding herd is expected to contract with overall production down. In the latest AHDB pork outlook, it is expected that UK pig meat production will be down by 6% on the year in 2022.

The struggles that have been facing the poultry sector are not expected to go away, in fact with the current ‘cost of living crisis’ poultry meat demand is expected to suffer along with all other meats. The laying sector have also been under pressure with margins being squeezed considerably due to rising costs, not being met by an increase in price paid by retailers.

Ruminant feed demand is also expected to be subdued this season, especially by the dairy herd. Despite relatively good milk prices, it still is not incentivising some producers to feed more to improve yields due to higher input costs. The big caveat with the ruminant sector this season and is going to be one to watch, is forage availability, as well as the weather going forward. The hotter and dryer conditions we have seen throughout June, July and now into August, has had an impact on forage production – as quite simply, the grass hasn’t been growing! With this in mind, we could see some producers have to turn to substitute feeding of compounds and blends as they don’t have the forage availability. Again, weather is always a watch point, if we have a harsh winter and/or spring and animals can’t be turned out then that would mean more feed usage too. As mentioned, this is one of the big watch points for animal feed demand this season.

In terms of cereal usage this season, its looking likely that we will have an ample wheat crop domestically this year - well at least an ample feed wheat pool. While the hot dry conditions may have hampered yields in some regions, a slightly larger planted area this year compared with 2021, is likely to offset that. 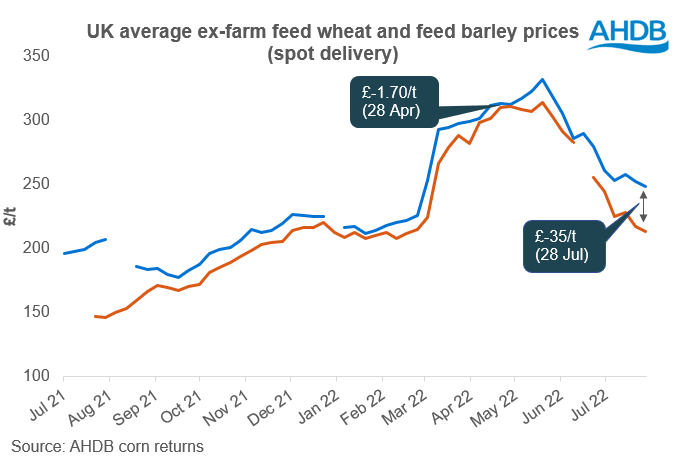 If I was writing this a few weeks ago I would have said that maize would be featuring heavily in UK feed rations for the first half of 2022/23 at least, due to its relative price and availability compared to wheat. However, with weather worries in the US of late supporting global maize markets, it has become less competitive. That said, maize was an attractive option at the end of 2021/22 with more being included in rations than initially expected. It is likely that maize inclusions will remain relatively supported during the first few months of this season. It may even continue to feature higher levels, if US weather worries subside, and UK wheat production is lower than expected.

In 2021/22, oat usage in animal feed increased considerably driven by a bumper domestic crop. With a more ‘normal’ crop expected this year, it is likely oats will fall out of favour once again.

In summary, and with information we have to date, wheat usage will likely continue to feature in rations this season at relatively strong levels. However, with questions over the size of the crop, cheaper options such as barley and maize may well snatch some of that demand. What is slightly more certain, is that animal feed demand will likely continue to decline this year driven largely by rising costs for producers and the end consumer. However, there is the caveat that feed usage is very much depended on the actual forage availability this season.