Growers Dismayed at the Unlevel Playing Field of Grain 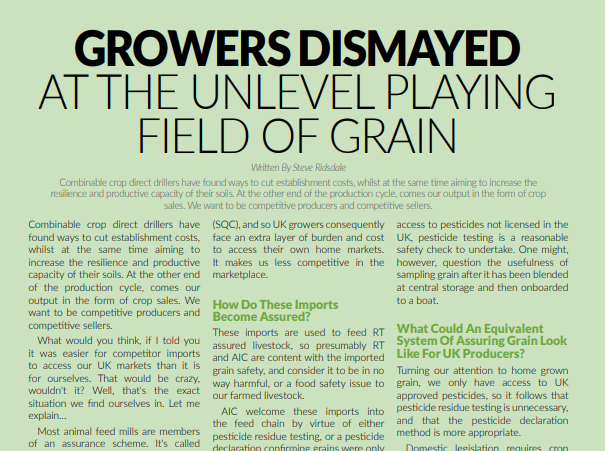 Growers Dismayed at the Unlevel Playing Field of Grain

Combinable crop direct drillers have found ways to cut establishment costs, whilst at the same time aiming to increase the resilience and productive capacity of their soils. At the other end of the production cycle, comes our output in the form of crop sales. We want to be competitive producers and competitive sellers.

What would you think, if I told you it was easier for competitor imports to access our UK markets than it is for ourselves. That would be crazy, wouldn't it? Well, that's the exact situation we find ourselves in. Let me explain...

Most animal feed mills are members of an assurance scheme. It's called the Universal Feed Assurance Scheme (UFAS), and it's administered by the Agricultural Industries Confederation (AIC).

Imported combinable crops are not required by the AIC to have any farm level audited assurance when supplying to a UFAS accredited animal feed mill. This contrasts with AIC's insistence that UK and Eire growers adhere to farm level assurance protocols such as Red Tractor (RT) or Scottish Quality Crops (SQC), and so UK growers consequently face an extra layer of burden and cost to access their own home markets. It makes us less competitive in the marketplace.

How Do These Imports Become Assured?

These imports are used to feed RT assured livestock, so presumably RT and AIC are content with the imported grain safety, and consider it to be in no way harmful, or a food safety issue to our farmed livestock.

AIC welcome these imports into the feed chain by virtue of either pesticide residue testing, or a pesticide declaration confirming grains were only grown using EU licensed pesticides. The notable difference is that AIC have NO requirement for these imports to have any farm level assurance at all. Think about that when you're next paying your RT assurance invoice, writing down when you cleaned your grain bucket, or writing down the exact time and date you put some rat poison down.

These imports, having been grown in countries where growers have access to pesticides not licensed in the UK, pesticide testing is a reasonable safety check to undertake. One might, however, question the usefulness of sampling grain after it has been blended at central storage and then onboarded to a boat.

What Could An Equivalent System Of Assuring Grain Look Like For UK Producers?

Turning our attention to home grown grain, we only have access to UK approved pesticides, so it follows that pesticide residue testing is unnecessary, and that the pesticide declaration method is more appropriate.

Domestic legislation requires crop sprayers to be NSTS tested, and operators must have PA1/2 certificates of competence. Local authorities check we are compliant in having written HACCP procedural records for grain drying and storage, and are also at liberty to inspect our pesticide records. These legislative requirements provide a risk based assurance that UK grain has a safe pesticide adherence. Government are content with this high standard of legislative framework and the food safety status this provides to our grain, and ultimately to the consumer. We have some of the highest standards in the world.

Our AIC approved TASCC merchants visit, and are welcomed at any time, 365 days a year, to take samples from our grain stores, check the hygiene procedures of our stores, inspect our machinery and visit our fields. If they're not happy, they won't purchase It's a self-policing system. In comparison, we should be mindful that AIC do not stipulate any on-farm checks of imports. Those imported grains are only entered into the assured food chain by the shipper, using the pesticide test or pesticide declaration methods.

It therefore follows, that a simple pesticide self-declaration on the grain passport provides UK grain with a much more comprehensive standard of assurance to that of imported grain, and so should be an accepted method for UK gain to enter a UK feed mill. This would give us equivalence to our competitors.

UK growers have not received any logical explanation as to why UK can't have the same trading terms as imports. Rather, we're told that in order to have access to UK feed mill markets, we must continue with farm level assurance from schemes such as Red Tractor or Scottish Quality Crops.

A quick glance at the SQC website shows that AIC are one of 8 members in the ownership structure at SQC. Click over to the RT website, and we learn that the company guarantors of AFS (the parent of RT) include the NFU, AHDB, NFU Scotland and Ulster Farmers' Union. We also learn that AIC have representatives on the RT Crops Board.

These associations must raise questions over conflicts of interest. We've seen our farming unions and AHDB support RT, and it's resulted in a situation whereby it's more difficult for UK producers to access the feed mill markets than it is for imports. Policies need rethinking, and it needs to happen quickly. Farmers are disappointed and perplexed.

Our representatives and statutory development board need to think carefully about who they are working for, or risk losing the support of the farmers who fund them. AHDB must work to ensure levy payers have, at a minimum, equal market access opportunities to competing imports, and our farming unions must help facilitate this. Questions need answering as to how anyone could have thought supporting the positioning of assurance companies, and the resultant market access anomaly, could ever have been a good idea.

Given that most other grain exporting countries did not have any farm level grain assurance schemes, it was an obvious and forseeable consequence that UK producers would be saddled with extra assurance cost burdens (in comparison to imports) for supply to our feed mills. Quite clearly, these policies were going to create a situation by which it would make market access more difficult for UK producers, and easier for competitors.

RT and AIC also have a responsibility here. They have responsibility to our home industry from whom they make a living, and they need to consider the position in which they have now placed our AHDB and NFU. Farmers have resigned their NFU membership over this issue, and with talk of a ballot on the future of our AHDB Cereals & Oilseeds sector, we want to be in a position where farmers can give whole hearted support to these organisations who are designed to help us.

We now need solutions. NFU and AHDB must no longer support a situation by which market access is more costly for UK growers. We must have, at a minimum, equivalent market access. Anything less is a failure by our NFU and AHDB.

Currently, feed mills and farmers are shackled to the AIC rules, and unable to choose different standards for themselves.

There should be nothing in the way of a free market economy. It's a huge disposition on the marketplace, and prevents the market trading naturally, commercially and in a free manner. Government decide upon our food safety regulations, not private self-appointed assurance companies who benefit from their own industry rules.

Schemes such as RT and SQC can happily co-exist with the pesticide declaration method of assuring grain. There should be nothing stopping us having two voluntary standards for UK grain, working in tandem to serve different aspects of the marketplace.

A milling wheat or malting producer may choose to be RT assured. Some millers or biscuit manufacturers may insist on RT, others might not. It would be market led and premium led. The industry is grown up, it doesn't need to be told what standard it should trade, particularly when the UK and imported grain is then blended into the same product.

RT has often been criticised for failing to produce a price premium. RT would need to work harder to provide a premium over farmers' compliance costs. That's no bad thing. Innovation and excellence come from competition, competition that RT is currently lacking.

Our producers should be afforded a level playing field, and RT, AIC, NFU and our AHDB, should work to achieve this.

I'd urge growers to speak to their NFU representative or AHDB contact.

Our own industry leaders have got us into this crazy mess. Now it's time for them to work to repair the damage.