HGCA: Independence, Innovation and Investment is a brief overview of who we are and what we do. Read about how HGCA is funded, what we invest in and how we add to a sustainable cereals and oilseeds industry.

To this end, HGCA runs a range of Business Development activities under the Reaping Rewards banner. From Arable Business Groups (ABGs) and Monitor Farms to workshops and conferences, the programme is designed to help farmers reap the rewards of the time and money invested in their arable businesses.

Through meeting with similar growers and expert speakers, the Reaping Rewardsinitiative is a great way for farmers to protect and enhance their business's profitability.

HGCA's Business Development programme across the UK is led by a team ofRegional Managers.

Also sponsor a Nuffield scholarship each year which this year I am the lucky recipient. Thank you

Now the smell of BBQ, coffee and dust in the workshop has settled I thought I would sum up the launch from my side of the fence. We had a great turn out for the launch, 52 growers in total and a few tag-a-longs made up of agronomists, machinery dealers and other industry representatives. Thank you for everyone who came and braved the weather. I hope you found it really positive and interesting.

I started off by setting the scene of how my own farming development had adapted and changed through my relatively short farming career. I chose to look in detail at my previous three winter wheat crops on the same field, then my previous three years of highest yielding oilseed rape fields and our general business approach to certain areas. 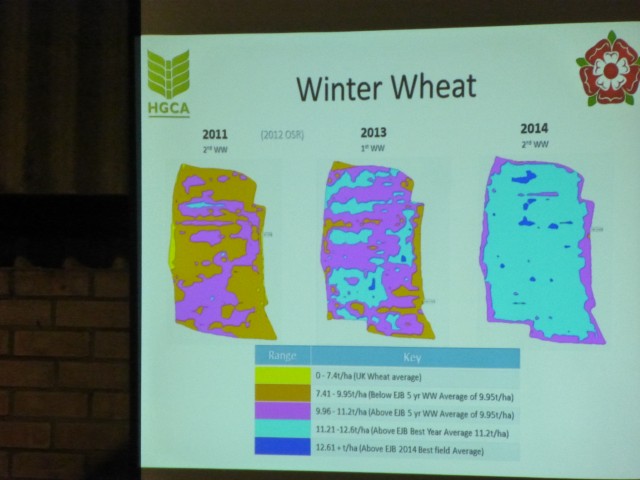 I pulled together information for one field over its previous three wheat crops with yield maps to emphasise my growing development. The 2011 crop of second wheat Glasgow showed huge variation in yield, with a field average of 9.6t/ha over 36ha. The 2014 crop of second wheat Horatio averaged 11.7t/ha and the variation of highest spot to lowest spot was a quarter of what it was in 2011. Okay, weather is the biggest factor that we cannot control and these exercises need to be taken with a pinch of salt; however as I started looking back at the agronomy decisions that I had taken, there was a really interesting development or pattern that could be seen. The table below highlights the change and adaption of my farming techniques through these three wheat harvests. (N.B. 2012 OSR) 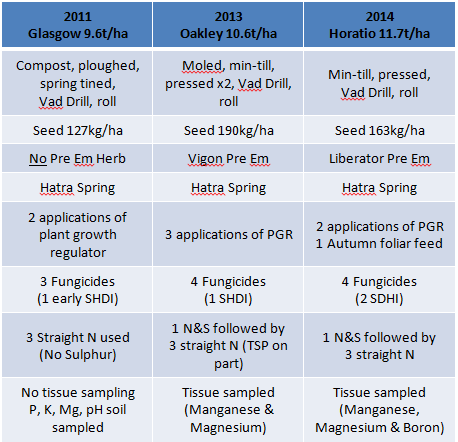 I have always been someone who questions routine practices and likes to play around and trial new ideas. This is just who I am: I like to question myself and so I also identified the following points that I am now asking myself. These are areas that may come up in future Monitor Farm meetings as a group. The points are as follows:

The oilseed rape was a similar story, however it was much more erratic with yield ranges from high to low much more concerning. I described oilseed rape as ‘oilseed risk’: many growers were finding that costs and risk for growing the crop was not being reflected in the gross margin return. When you factor in the risk and extra management of hail at harvest, chasing pigeons all winter, flea beetle without seed dressing and the unseen black-grass problem (we miss it but know it happens as our dirtiest fields always follow OSR) – with all this risk and un-added cost the final margin is very low. Myself and several in the room were losing the faith that this was a good crop to concentrate on, but, then again, what are the options?

These were the points that I had highlighted as areas that I want to improve my knowledge of:

The business and other crops had a brief introduction but many of the elements that I had spoken about were also reflected in the two main crops. This was basically me taking my farming decision clothes off in public: the attending farmers were free to ask questions but I wanted it to be a two way street for knowledge exchange.

I wanted something from them.

So this is where it got interesting. I had organised a computer program which allowed real time voting. Wireless clickers were given to everyone and I had prepared a series of questions relating to the topics I had discussed. We then as a group saw the graphs appear real time once the question had been explained by me. These are again results that you need to take with a pinch of salt but it gave a real insight into what people were thinking about the subject. I have picked out a few results that I thought were interesting. 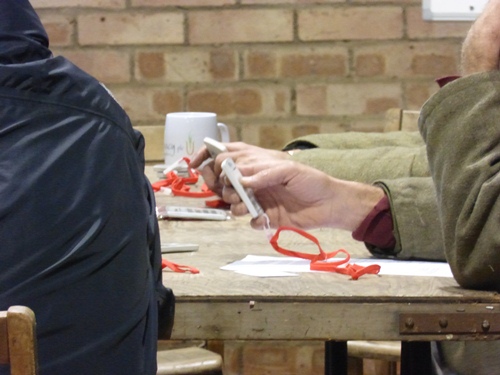 After a superb lunch and a quick wander around the farmyard and building we held group exercises where all the growers split into small groups to discuss points I had highlighted relating to business management, wheat production and OSR production. All this information is to be used to create the programme for the Monitor Farm group going forward. Some great discussion and feedback has come out of the day and now my steering group and I have the task of pulling together a series of meetings that will be both informative and helpful for as many people as possible going forward. 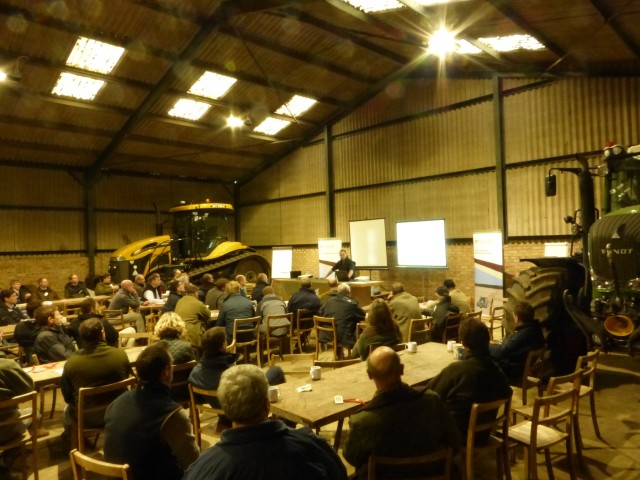 More information will follow about winter events and the program. Again thanks to those who came to the launch. If you want to get involved then please contact Tim Isaac, our HGCA Regional Manager.

Have a fun festive season and I hope to see you at the first meeting on Friday 9 January 2015.

HGCA Monitor Farms bring together groups of like-minded farmers, who wish to develop or expand their enterprises, in an environment which encourages them to share critical performance information. This information is discussed and evaluated by the group, encouraging and facilitating business improvement through the adoption of new technology and practices.

The vehicle for this is a working farm supported by a Steering Group and facilitator, and the group of local farmers, who form themselves into an Arable Business Group that is linked to the monitor farm and who benchmark the performances of their businesses.

What distinguishes HGCA Monitor Farms is that they are ‘owned and operated’ by the group of local farmers – for farmers, by farmers. This results in issues and solutions being relevant to, and delivered in a format understood by the local farmers.

Monitor farms draw on local expertise, planning and community collaboration to improve farm production and make a big difference to farm profits. Success on a single farm provides nearby farmers with a wealth of practical and proven information to take home and use in their own enterprises.

HGCA’s newest Nuffield Scholar is to research the potential of companion cropping in UK arable systems.

For the next 18 months Andrew Howard, a farmer from Kent, will study examples of farms across the world which use companion cropping, both arable and non-arable

Companion cropping is the practice of growing two or more plant species in the same field at the same time, and includes intercropping, undersowing, relay cropping and pasture cropping. This includes cases where only one of the plant species is harvested, as well as where both crops are harvested.

Andrew Howard farms 345ha in a family partnership near Ashford, Kent, growing winter and spring wheat, winter and spring oilseed rape, spring oats, spring barley, winter barley, and field beans. His soils range from heavy weald clay to light sand. Andrew is a committee member of BASE UK, and member of LEAF and the Institute of Agricultural Management.

Andrew said: “I chose this topic because we’re already doing a lot of work on our farm to try and improve our soils, from no-till to cover cropping. We’ve got mixed species in our cover crops, and I want to see whether this will work in our cash crops. Companion cropping is a natural progression from what we’re doing so far.

“Another reason for choosing this subject is that we’re also facing increased input costs. There is evidence that companion cropping could reduce a farm’s fertiliser and herbicide usage, and so it could also be a way of reducing our cost of growing crops.”

“The trials worked quite well. I’ve grown small areas of oilseed rape with vetches or a vetch and buckwheat mix, primarily on medium soils, and found the rape was better established, had better rooting, and we were able to reduce our herbicide usage, compared with our normal cropping. When I tried growing Peola (spring oilseed rape and spring peas together), for that trial, it gave us a better gross margin than the spring rape by itself. I’ve also tried undersowing spring cereals with clover, which hasn’t been successful yet.”

“With a Nuffield Scholarship I get to meet the best people around the world working on this and get more ideas on best practices. I want to find out what can and can’t work, and why.”

Andrew hopes in the long term to have a farm system which is self-sustaining, with healthy soils and minimum fertiliser and herbicide inputs.

“I want to keep improving the soils on my own farm and help other UK farmers to do likewise. Around the world during the last 60 years soils have been degraded, and I’d like to think that in the next 60 years I can help us to improve them again.”

On what he hopes to gain from being a Nuffield Scholar, Andrew said: “A lot of it is the experience of meeting amazing people around the world. Being a Nuffield Scholar opens doors to see things I wouldn’t usually see and to meet with the global leaders in this field. Also, to bring back to the farm ideas on how to improve our cropping and costs, and even adding value to the crops at the same time. In the future it’ll give me a network of other Nuffield Scholars to keep in contact with and learn from.”

During the 18 months of his scholarship, Andrew will write regular blogs for hgca.com, and can be found tweeting @farmerandyh.
Andy is also a forum member, See 'My Nuffield Scholarship'

2015 has been designated by the UN as International Year of Soils, in a bid to increase awareness and understanding of the importance of soil for food security and essential ecosystem functions.