Margins are under pressure in several animal sectors due to higher feed, energy, fertiliser, and labour costs. It looks like this is starting to bite into demand for compound feed.

The latest AHDB animal feed production data shows that in October total compound feed production, including Integrated Poultry Units (IPUs), fell 4% from October 2020. This means that for the season so far (Jul-Oct) production is now down 0.5%.

The declines were led by cattle and calf feed production, which is back 2% compared to the first four months of 2020/21. In comparison to last year, production has slowed more as the season has progressed. Output was down 4% year on year in September and down 6% in October.

Profitability in both the dairy and beef sectors is being pressured by high feed and other input costs. It seems this is now translating into lower production and use of compound feed. More forage production could also be contributing to the easing in compound production, after good grass growth this summer.

Meanwhile, margins for pig producers remain negative. As a result, there are increasing expectations of a decline in pig availability as we progress through 2022. But, so far total pig feed production is still up 2% year on year (Jul-Oct). This is due to a rise in finishing feed production (+9%), likely linked to the backlog of pigs waiting for slaughter. If pig numbers do drop as we move into 2022, pig feed production could also reduce.

Demand from the poultry sector also fell in October (-3% vs October 2020). There were declines for broiler, layer, and turkey feed. However, the season total is so far broadly static. This will be an important area to monitor going forward.

Similarly, sheep feed production was down year on year in October (-1%) but remains up 6% for the season to date (Jul-Oct). 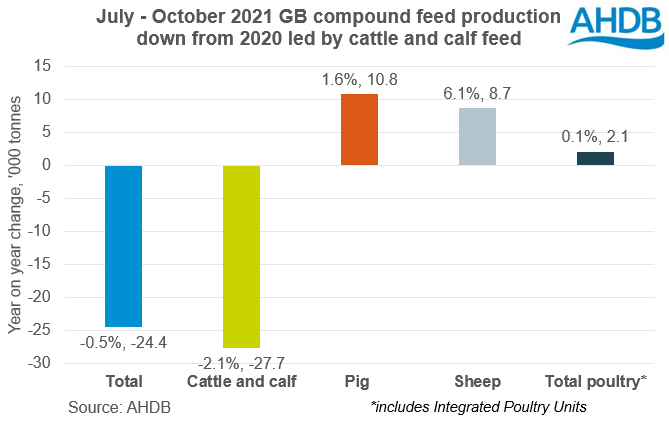 Animal feed is a key part of the demand for cereals in the UK. Weaker than expected demand could mean weaker UK prices for feed grains, while stronger demand would support prices.

Currently, AHDB forecasts that total cereals demand in animal feed, including on-farm usage, at 13.0Mt in 2021/22. This is 247Kt or 2% less than last season mainly due to an expected drop in compound feed production.