Inappropriate use of cattle trailer

I thought I would post a warning to anyone in the Carmarthen area about this issue.
We were stopped by the police, full blues and two's, for using the cattle box to transport some solid drain pipes home. Granted they were sticking out quite a bit. But did the nice policeman really need to radio for a 2nd police man to hold the tape measure for him?
Apparently you are allowed to have 3 foot overhanging as long as it is clearly marked. Any longer and you need permission from the police to carry said item. And a cattle box is for carrying cattle, nothing else, hence the charge of inappropriate use.
The matter is to be referred to a police panel to decide on appropriate action.
We were not allowed to carry on home, we had to leave in a friends field, we were followed to make sure this was done. Said friend described the police man in question and said that he has already been stopped 3 times by him.
You couldn't make it up!

He sounds a bit like our friend PC Westbury

i think...in fact i know i would....take the pc's details then write to the local newspaper critiscing the elected commisioner for focussing on making honest ppl criminals rather than tackling the real thing....you can bet he/she wouldn't enjoy that

i'd have to improve my spelling first though

I suggest you read this and then politely ask PC dimwit if he wants you to print a copy? Unless you are going to fess up to having 11' sticking out the back of your trailer?

Not according to this pdf (although I'm assuming it relates to trailers as well). Edit: Previous post also links to a similar document. 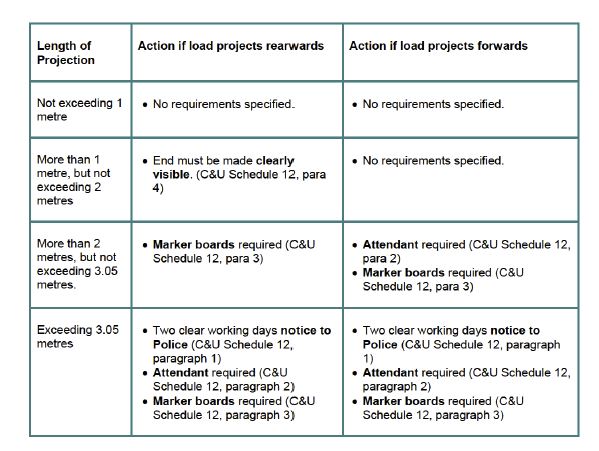 Some people haven't much to do have they?

So what if there was 7 or 8 foot sticking out? What harm was it doing to anybody?

Edit: By my calculations there would only be about 1.5m sticking out at most when you allow for the angle from the top of the tailboard to the bottom of the front end of the trailer. Pretty sure that on a 14ft trailer a 6m pipe only has a couple of feet overhang.
Last edited: Oct 5, 2016

GTB said:
So what if there was 7 or 8 foot sticking out? What harm was it doing to anybody?
Click to expand...

Could well have been. Bit off his beat?

Wendy10 said:
Could well have been. Bit off his beat?
Click to expand...

madmatt said:
I suggest you read this and then politely ask PC dimwit if he wants you to print a copy? Unless you are going to fess up to having 11' sticking out the back of your trailer?
Click to expand...

Apparently measured to 2.3. I admit it was sticking out, I just think the reaction was over the top.
Thanks for the chart though.

Wendy10 said:
Apparently measured to 2.3. I admit it was sticking out, I just think the reaction was over the top.
Thanks for the chart though.
Click to expand...

Ah so you needed a marker board.

There is no rule whatsoever that says that nothing but cattle can be carried in a cattle trailer. Tell them that you'll see them in Court.

Unfortunately your overhang might well have been over the limit, although unlikely on the face of it, but I would have thought that a fixed penalty notice would have been appropriate, if not just a warning.

However, Westbury is undoubtedly the biggest plonker in the Welsh police force and probably near the top for the whole of the UK. He's notorious not only with the public, and farmers in particular, but within the police force nationwide.

In one case he stopped a catering trailer on a Sunday and decided that one of its tyres was worn. Sprayed it with yellow paint and put a stop notice on it in the lay by until rectified. Luckily the lone lady driver knew a local, to her, tyre fitter that came out to it. It was dark and late by then. The qualified tyre fitter/business owner, looked at the tyre and couldn't find a single thing wrong with it apart from yellow paint. Westbury was just as bloody-minded as usual and made stuff up to suit his power-crazed agenda.
In this case a complaint was made to the Chief Constable and subsequently a letter of apology was obtained along with the implied 'Oh no, not Westbury AGAIN!'

I suggest that if the overhang is legal, that this goes the same route. An official complaint to the Chief Constable.
Last edited: Oct 5, 2016

GTB said:
With any luck he's been moved to your neck of the woods
Click to expand...

In fairness I think the only thing that would have bumped into our plastic pipes was a low flying jet! The policeman had too shin up onto his car to reach them, and even then his tape wouldn't reach. They were over the back of the trailer ramps.

That is fine, next time you need to move some drain pipe, tie it all to the roof of the truck and don't use the cattle box.

Clearly a police 'slow news day'. I have no time for plod at all unfortunately.

Interesting... We're a few miles above Sancler and have heard from friends of a rather officious fellow working on the A40 and... I was coming back from Llandeilo a few weeks ago, towing an empty cattle trailer, and had got past the B&Q in Carmarthen - so before the mart - when a chap in a marked police car came up behind me and followed for a mile or so, then he pulled along side for a while and kept leaning over to get a better look at me, after a while this irritated me so I winked at him and blew a kiss, much to my boys' amusement. No reaction at all, he just went off ahead, I got off at Sancler and saw no more of him. I wonder if it was the same fellow.

The thing is, even with a 14' trailer and the pipes up at an angle he's still applying the law correctly - even if a bit too over-enthusiastically. I think the same fellow had a go at a local contractor who had some gate posts sticking a bit far out the back of a pick-up, and we are only talking about a foot or so. There used to be a fair bit of discretion and common sense applied by the plod and they ignored you or just had a quick word unless you really were taking the p*ss - which was fair enough.

@Wendy10 did you get his number? It would be interesting and entirely legal to have a record on here of repeat offenders (if you see what I mean).

@bobk the dead ones in your pic are in a lot better shape that some of the African ones I've seen who braked hard while carrying unsecured loads; one near Moshi had a huge amount of 1" rebar redefine the meaning of 'kebabbed' or 'shafted'....
Share:
Facebook Twitter Tumblr WhatsApp Email Share Link