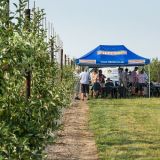 Given that profit margins are tight and labour is in short supply, a “robot ready” orchard that yields almost twice as much Class I fruit and can be mechanically harvested would probably be a dream come true for the UK’s top fruit growers. Happily, crop production specialist Hutchinsons’ ground-breaking, ten-year project – named Hutchinsons’ Enhanced Light Interception Orchard System (Helios) – could help growers achieve this vision.

From investing in intensive planting schemes to finding new ways of enriching soils, the past few decades have seen the top fruit industry hone its growing practices to produce better yields of high-quality fruit. Nigel Kitney, fruit agronomist for Hutchinsons, says as this quest continues, pioneers in the fruit sector are concentrating their efforts on the bright yellow ball in the sky.

For example, the theory behind the work of pioneering research scientist Stuart Tustin, who is based at the New Zealand Institute for Plant & Food Research, is that the sun’s rays are currently under-utilised by most top fruit producers. Nigel explains: “The premise is that, if you go back to plant physiology, the ultimate yield depends on converting light into useful output.” He notes that Stuart is therefore designing orchards that can intercept the optimum amount of light they require and then utilise that light more efficiently. Stuart is achieving this, says Nigel, by producing densely-planted trees that have a very small diameter and the right leaf-to-fruit ratio – ensuring plants have only the minimum amount of leaves required to grow and feed the crops, and that every leaf is always in the sun. Nigel likens this design to having “a polo mint or a well through the tree” as the foot-long area surrounding the trunk features no leaves or verticals – just flat branches coming out of it.

Stuart and his team are aiming to increase their yields from 90/100 tonnes/ha to 160 tonnes/ha. Nigel says: “That’s a huge increase in productivity. So, we are working on the basis that if you are producing 60 tonnes/ha in the UK that would equate to 100 tonnes/ha.” With these potential yield increases in mind, Hutchinsons is running, in tandem, two trials as part of its Helios project. One of the trial sites is based at AC Hulmes & Sons’ Hoaden Court Farm near Ash, Kent, and is being managed by agronomist Rob Saunders. The other site is on Nigel Kitney’s own orchard in Newent, Gloucestershire.

Drawing inspiration from Stuart’s focus on light capture, the Helios trial orchards, set up last year, include a handful of experimental, “light catching” planting systems that will lend themselves well to mechanical harvesting. Hutchinsons is also using the trial as an opportunity to experiment with promising apple varieties and different rootstocks.

The Kent-based Helios trial features three rows of each configuration. One of these configurations is modelled on Stuart’s New Zealand-based system of creating a single, planar ‘two-dimensional’ tree. This sees the branches trained along a fruit wire, much like the Guyot grapevine system. These trees are being grown on M116 rootstock, which is understood to have better phytophthora, woolly apple aphid and drought resistance. As Nigel considers: “Maybe planting fruit walls on M9 is the wrong thing to do?” The M116 rootstock has also been used on a low-cost orchard system with no trellis work because the Helios team, explained Nigel, is keen to explore ways in which growers can keep their orchard-establishment costs down. “Can we do the same thing but much more cheaply?” he asks.

Included in the Helios trial is a section whose design is based on the top fruit industry’s “v”-shaped pear orchards. Here, Galaxy Gala on M9 rootstock has been planted at an 80-degree angle and with a target canopy depth of 0.3m (and a 0.39m tree spacing). Nigel says: “We thought one way of enhancing light is to grow apples on the V-system, where light is falling down the middle. You can see that already in year two there is quite a useful crop here. So, the yield build-up is very good. If you are planting an orchard it’s the yield in the early years that helps pay the money back. Sometimes, it pays to invest more money in the initial planting costs because you get a faster return.” Nigel estimated that there is already around four kilos per tree on this v-system and he hopes that the yield will double next year.

Gala Galaxy has also been used on a similarly-angled, four-stem system – but in this part of the trial M26 rootstock has been used to encourage more vigour.

The Hutchinsons team has also drawn inspiration from another top fruit industry pioneer – the late Koen Carolus from Belgium. His patented, three-year Magnum tree is a taller-than-average tree that boasts a crown of branches at three levels to give the tree optimum exposure to light. It has been planted in this trial this spring at a one-metre tree spacing on M9 rootstock. Nigel hopes that it will yield a relatively heavy crop of Gala (SchniCo) – possibly 15 tonnes/ha – in its second year. “It’s a tree that rapidly builds up yields. Interestingly, when Koen designed this tree he anticipated that you would get a high early yield but that by year five a conventional fruit wall orchard would catch it up. But some trials in Belgium have shown that, even in year five, the Magnum tree is still yielding 25 per cent more than a normal leg tree. He adds: “Twelve kilos [per tree] is not unusual in the second year, which is very useful. And the price is not a huge amount extra per tree.” The Helios trial also includes a normal leg tree that is growing Gala Galaxy on M9 rootstock at a tree spacing on 0.86m. This way, growers will be able to see how the larger Magnum tree compares to a typical UK production system.

Much like deckchairs are angled on the beach so that their occupants can catch the optimum amount of sun, the Helios trial’s photovoltaic configuration sees Gala Galaxy trees, planted at a 0.78m spacing, slanted at a 50-degree angle to soak up the sun’s rays. Unlike the rest of the trial’s trees – which are orientated north/south – these trees (which have a canopy depth of just 0.3m) are orientated east/west. “If you put them at 50 degrees you have a 40 per cent increase in light compared to a north/south planting,” explains Nigel. “We are aiming for them to grow like a herringbone, with just one layer of fruit. They were more expensive to put up but it will be worth it if we get the right results. If you can get high-value fruit and high-value yields early, it’s good for growers.” The Helios team has planted both an M9 and an M116 version of this segment of the trial.

Hutchinsons has taken the opportunity to plant some Carolus varieties to see how they fair. These include, for example, ABCz, Asfari, Belgica, Big Bucks, and Finesse. The Jester pollinator tree has also been incorporated into the trial, as Nigel explains: “A Jester trial in Northern Ireland found that this variety gives really good pollination. Pollinators are included in the Helios project because there is evidence that fruit that has more pips in it has a better supply of nutrients, mineral analysis, colour, flavour and storability.”

With its array of different varieties, fruit tree shapes and growing systems, the Helios trial will undoubtedly produce some helpful results for UK fruit growers as they look towards a future with increased mechanisation, a changing climate and an ever-demanding marketplace. Growers were shown around the trial for the first time at the end of July and, as and when Hutchinsons have new results to share, members of the industry will continue to be invited to view the Helios trials over the coming years.​
You can read this update from Hutchinsons on TFF's AGVendor...
Click to expand...