John deere weights on a massey?

Has anyone ever used JD weights on a massey?

I've a spare JD large weight carrier and 6 x 50kg slices. Looking to put them on a 64 series massey.

If anyone has done this before let's see how you did it? In my mind I will have to make a 25mm thick adaptor plate to bolt on instead of the massey carrier and allow me to bolt on the JD carrier?

Anyone wondering is this a 'too much coffee idea' basically the massey weights are too hard to get hold of and I'm better using what I have sat in the shed.

https://parristractors.com/used-tyres-accessories/ sure he’d ship them over
R

I think I'd faint at the price
A

My cousin bought massey weights from David McGrath machinery farm machinery Aghalee, he said they were good people to deal with.

i made this for mine 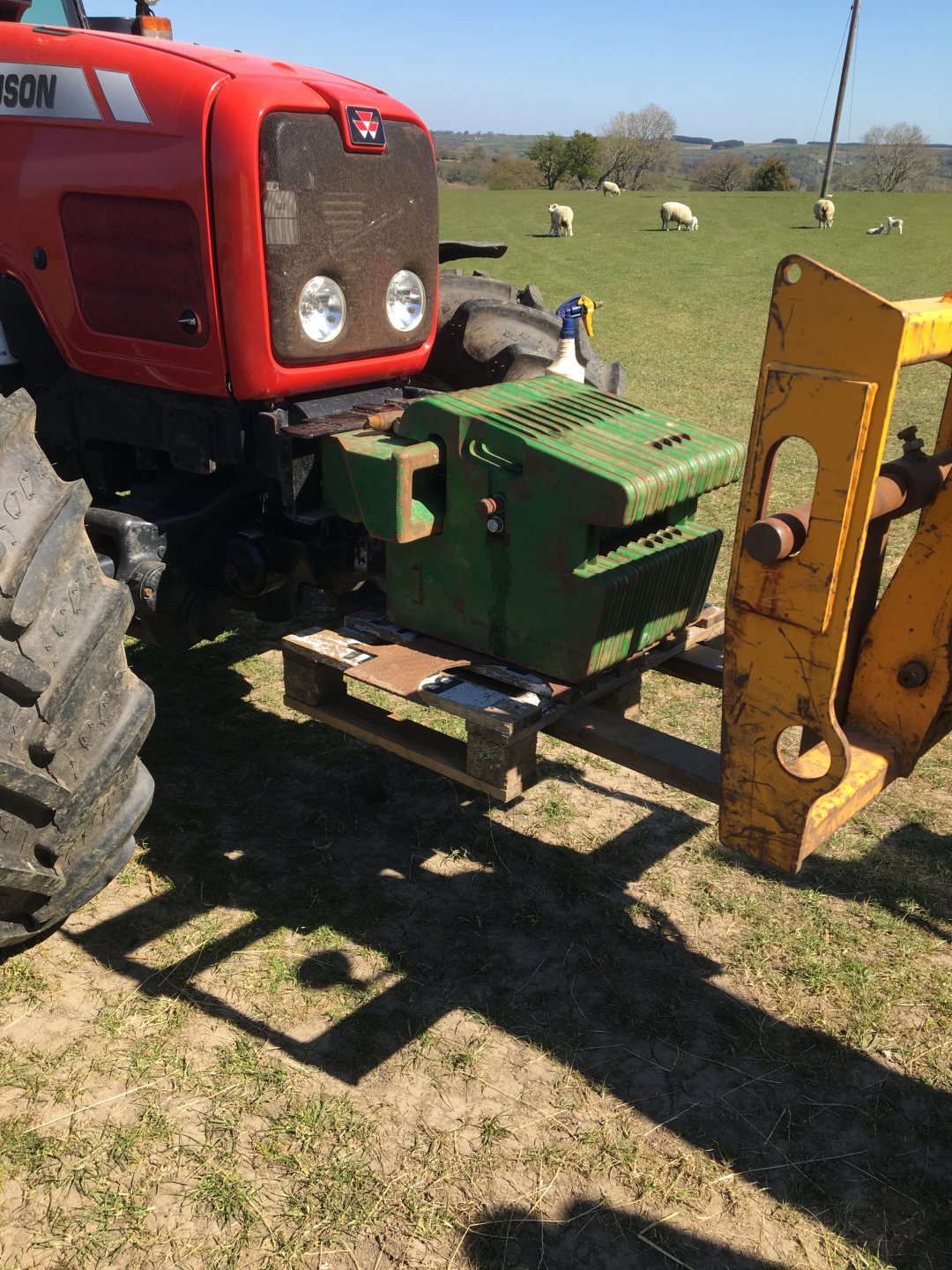 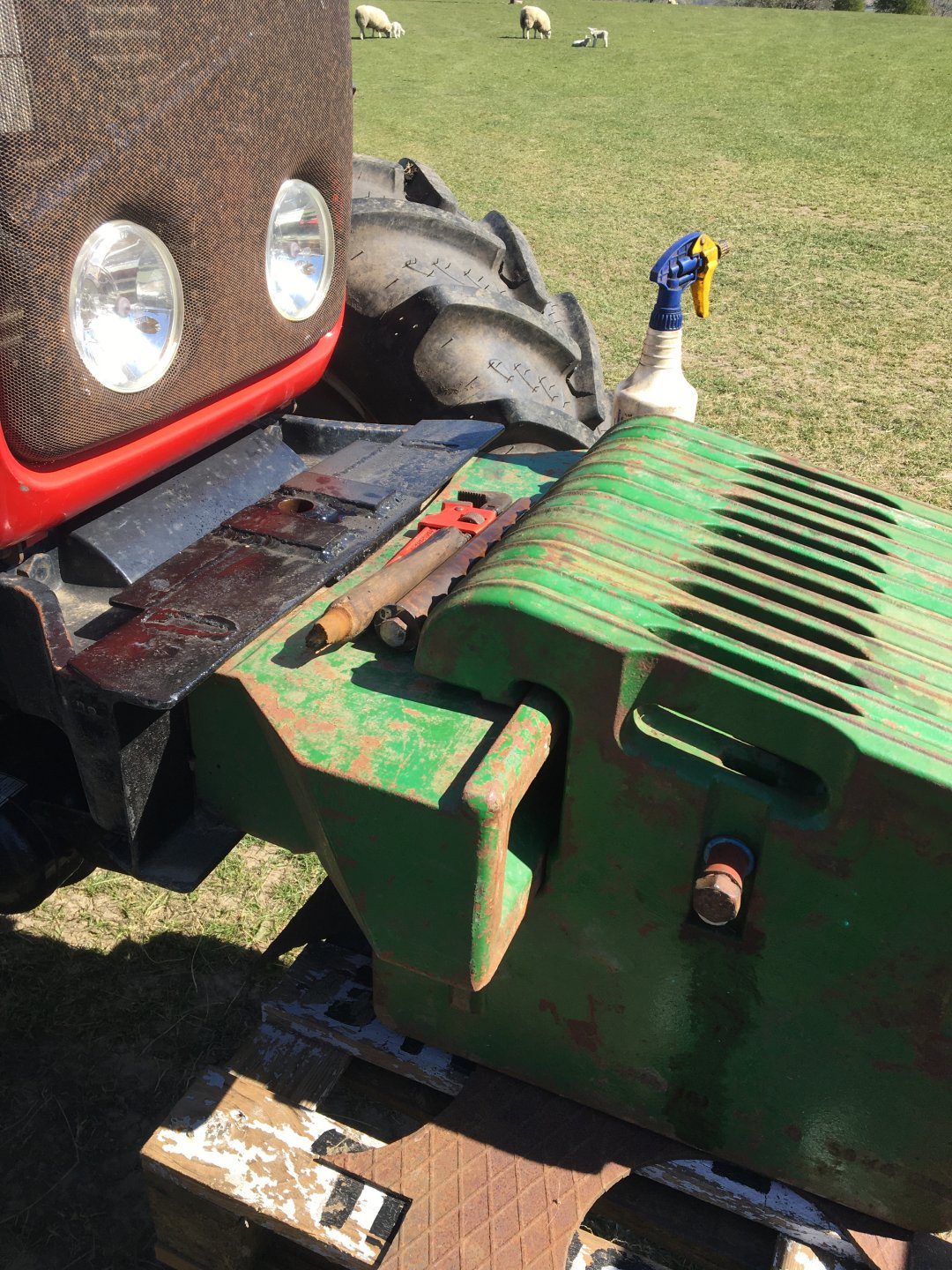 the 'i' beam section has got nuts and plates welded in it this side so the jd block bolted to it, has to trim it ever so slightly so it fit inside the web of the steel neatly.

then the i beam fits over the mf block nicely and i had some spare collars the correct size for the pin so cut a hole and welded them in so its all a nice tight fit.

was originally made by me as a rear weight for a loader which i used it for years as then i sold the tractor, chopped the top off and pins to make it fit over mf tombstone, should have beefed it up a little more where the jd bit bolts to girder but seems to work fine.
Last edited: Mar 7, 2022
R 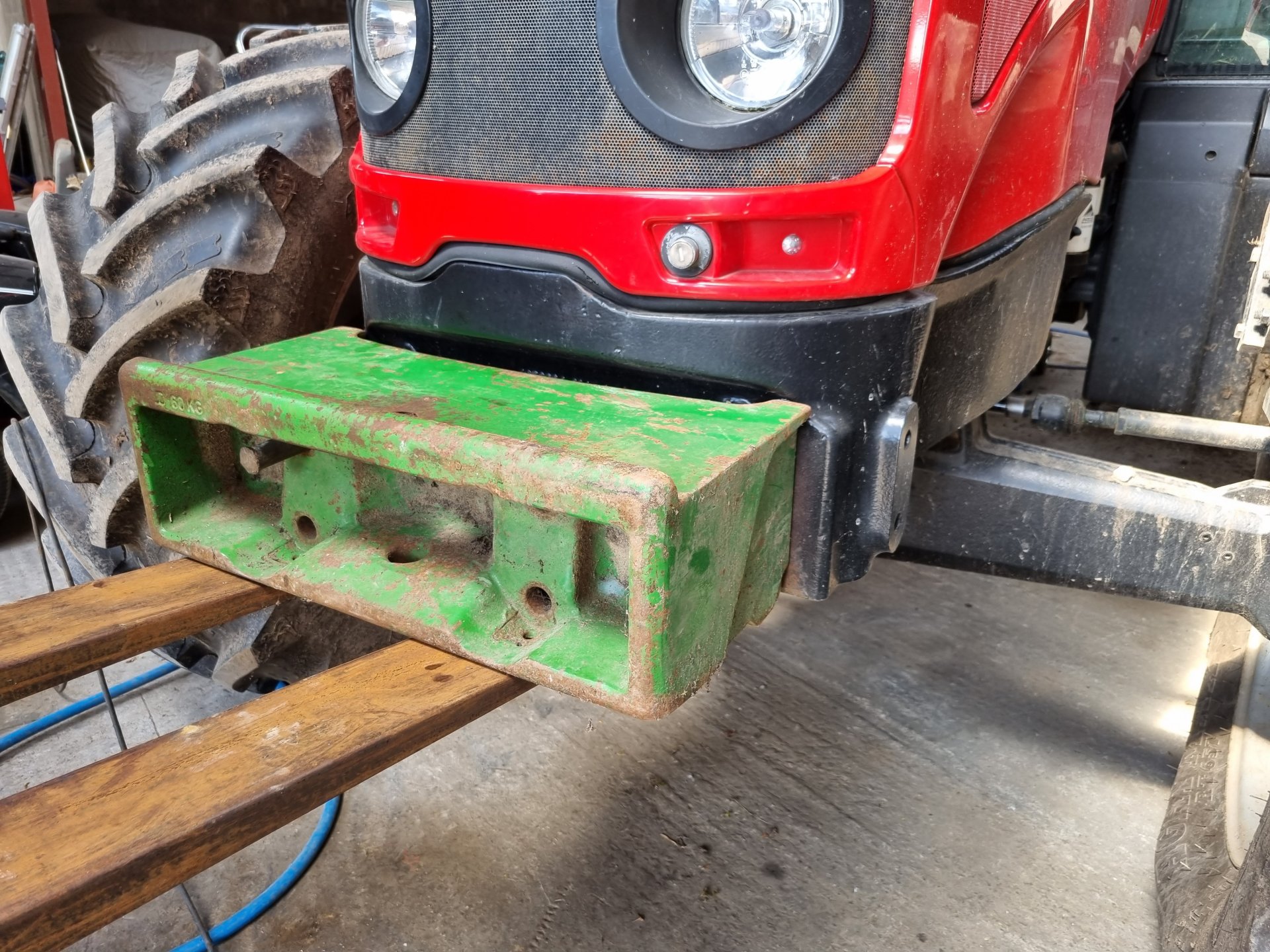 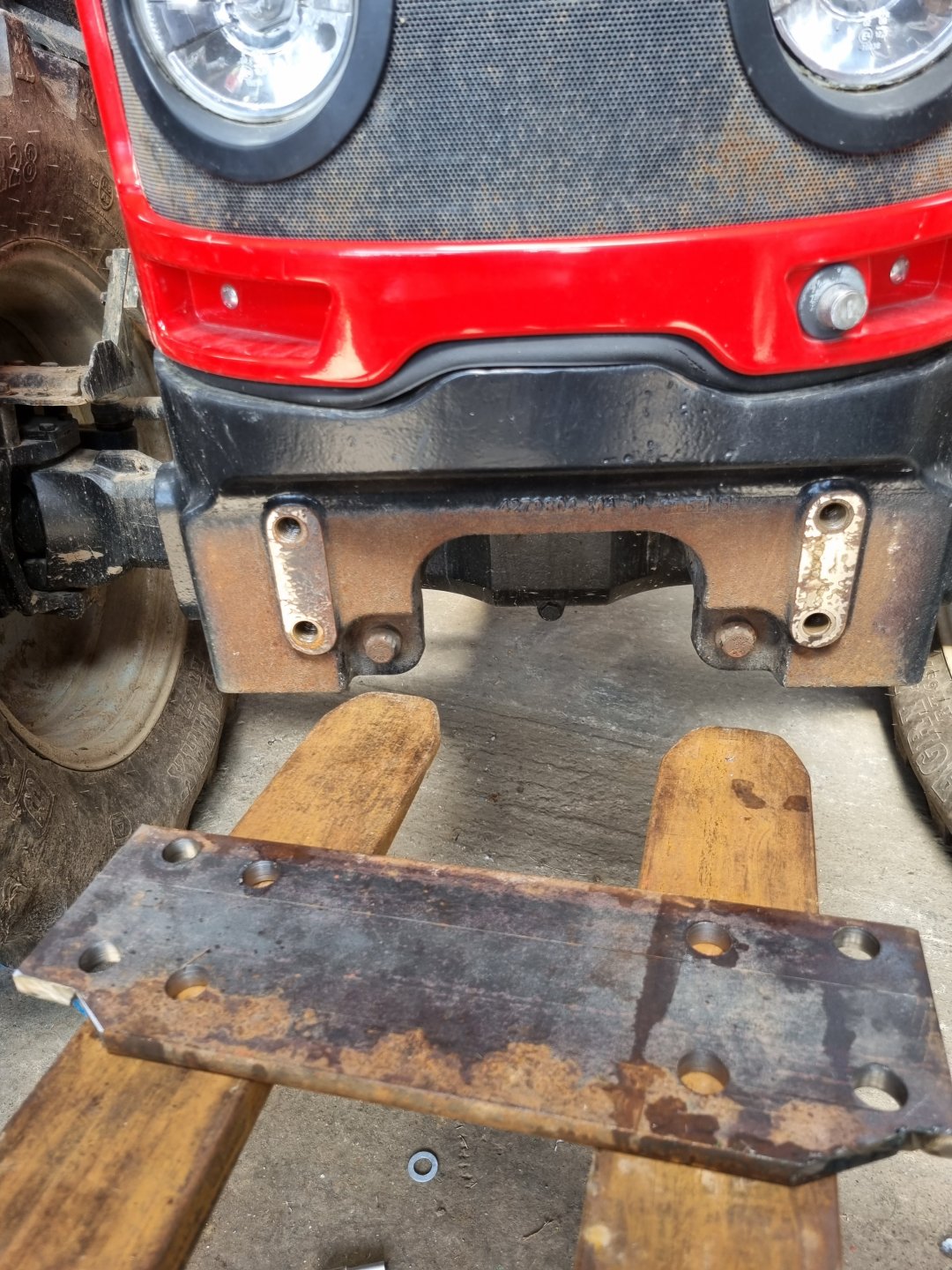 Bolts and black paint in the morning

Mind you don't give it second hand head gasket problems

I've got 14 x50kg John Deere wafer weights on the front of my 8240. With a single MF weight either side, clamped on properly, then a ratchet strap around the whole lot. No problems. The JD weights will hang on the mf carrier. My problem is I need a lot more weight on the front...and there's no more room. Have a 6m power harrow, and we have steep hills, especially in transport mode.

They won’t fit if you have front suspension tried the jd weight on my mf block before I made adapter, the lower part of the jd weights hits the accumulators
R 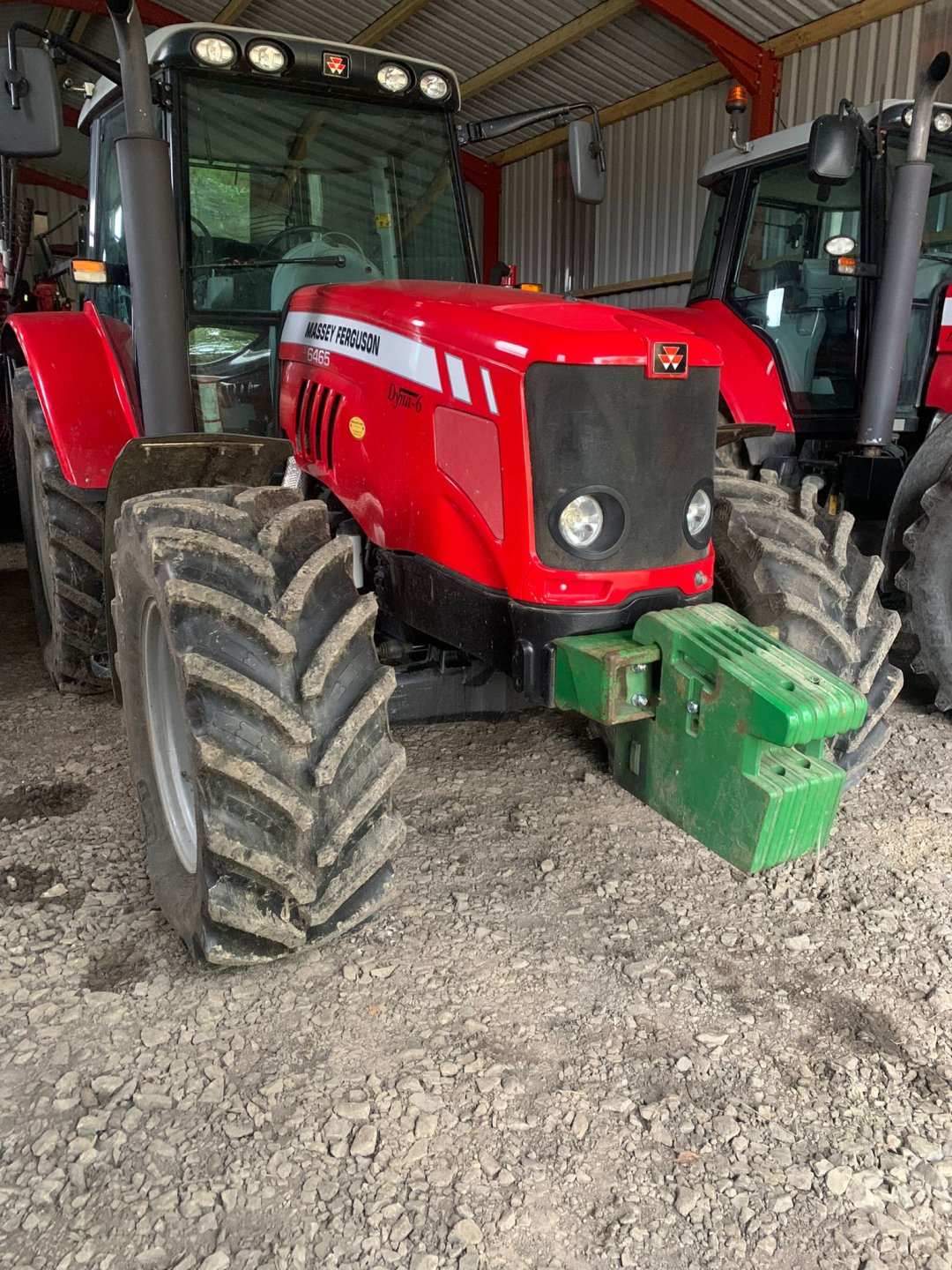 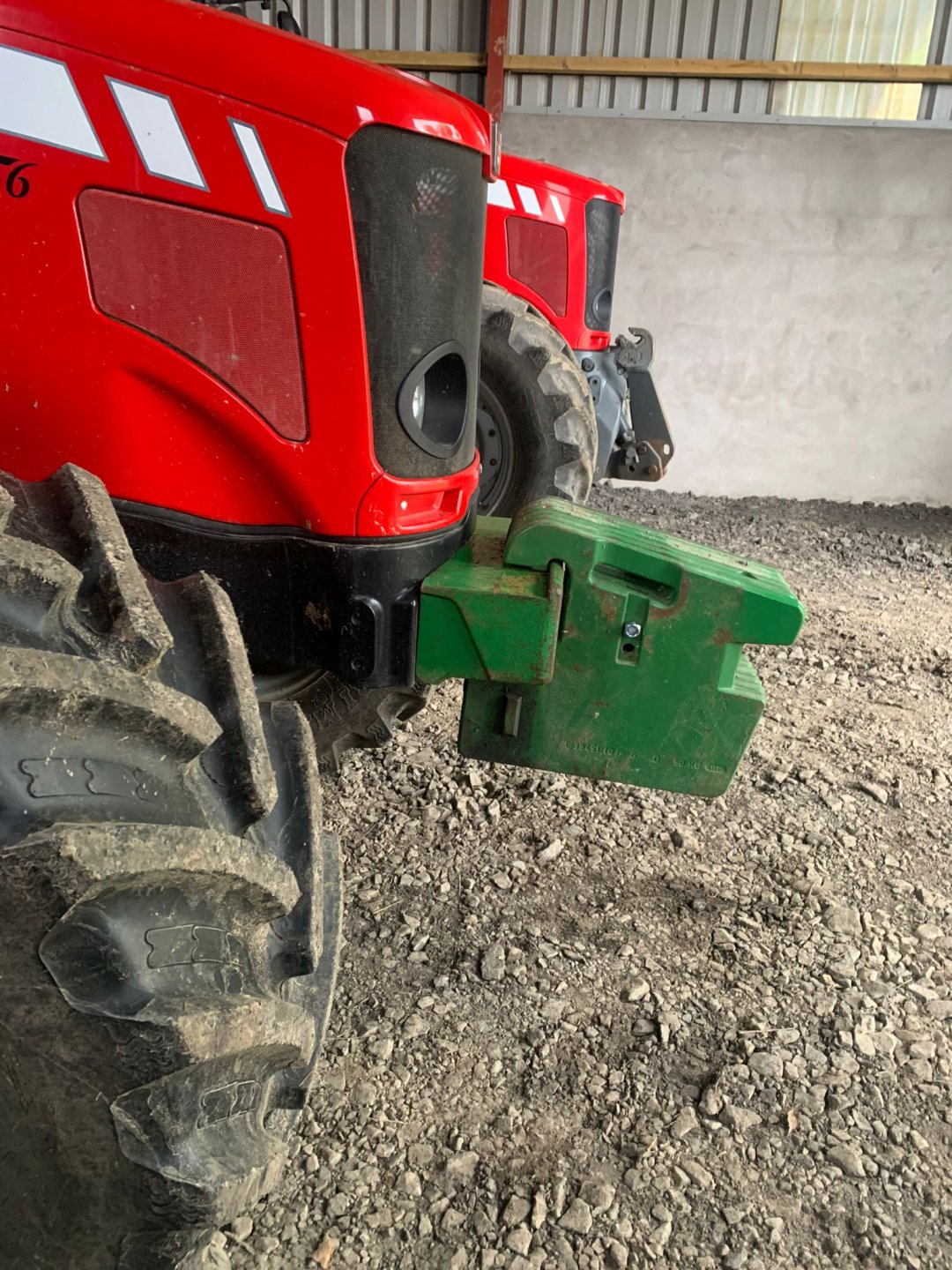 Just seen this topic. Over the main first cut I had my MF5445 T3 hauling grass on some very steep fields [and some flatter]. Hadn’t had weights on it before but knew it needed them and around 25psi in the rear tyres [to stop them being pushed off the rims by the 12 ton trailer]. Fitted JD weights as seen in the pictures above straight on the MF weight frame with no bother. Used the genuine long bolt devices that have nuts welded on and that can slip between slices and used a thinner bar than the JD genuine between the centre two weights to locate them centrally through the hole in the MF carrier and six slices fitted perfectly level and securely.

I don’t think I took a picture of them fitted, or is I did they are still on one of my cameras and not uploaded yet. If I find any I’ll be sure to come back to post them. First time I’d used them in at least a decade, possibly two. They were regularly fitted to my old JD6200 which used to do the fertiliser spreading.

I was quite surprised that they fitted so well and easily with no modification apart from using a thinner bar than original for central location. It was an emergency job as the historically troublesome Grammer seat base in my 7490 had a faulty switch that caused the compressor to constant pump and it burst an air pipe. 45 minutes to take the rake off the tractor, add some oil to its gearbox [those 12 tonners take a lot of oil to tip], add 5psi to each rear tyre and fit six JD weights and it was back in action and did two days carting like a champion.

As for the seat, I ordered a brand new base the next afternoon and it was with me next day to be fitted the day after sheeting the pit, ready to spread the 70 by 10,000 litre loads of slurry. This has done less than 5500 hours and I’ve had the airbag rub against something and leak, a previous pipe burst, the switch and pipe now and it turns out that the shock absorber and a few nylon bearings need changing also. Plus a new compressor last year. Contrast that with the Same’s simpler Grammer air seat which has done nearly 8000 hours and the New Holland’s about 10,000 hours, both without the slightest problem, and I’m sure the new seat base was the right decision. And what a difference it makes! I never realised that the shock absorber was so worn out.
Last edited: May 23, 2022

Pictures from this morning 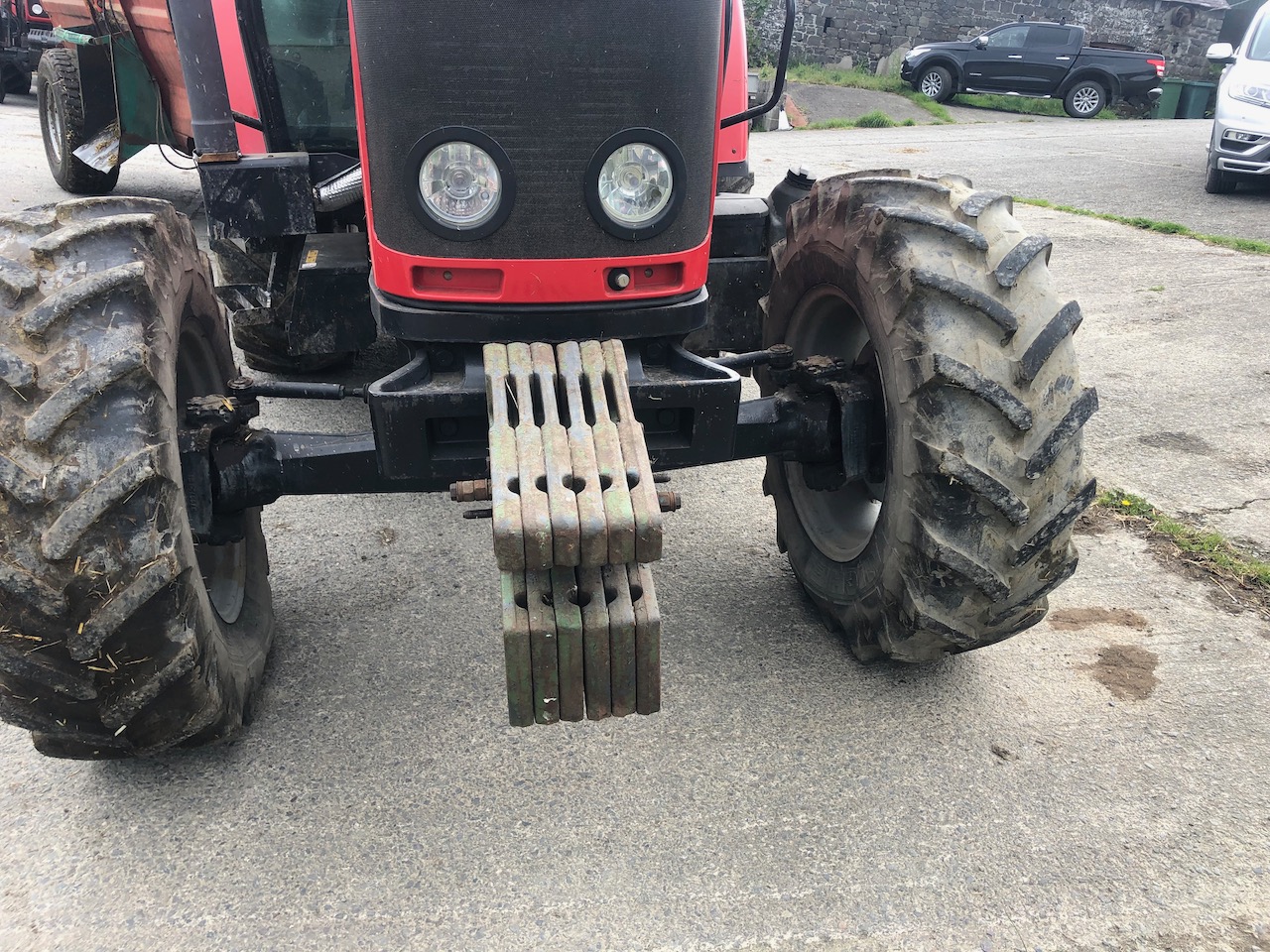 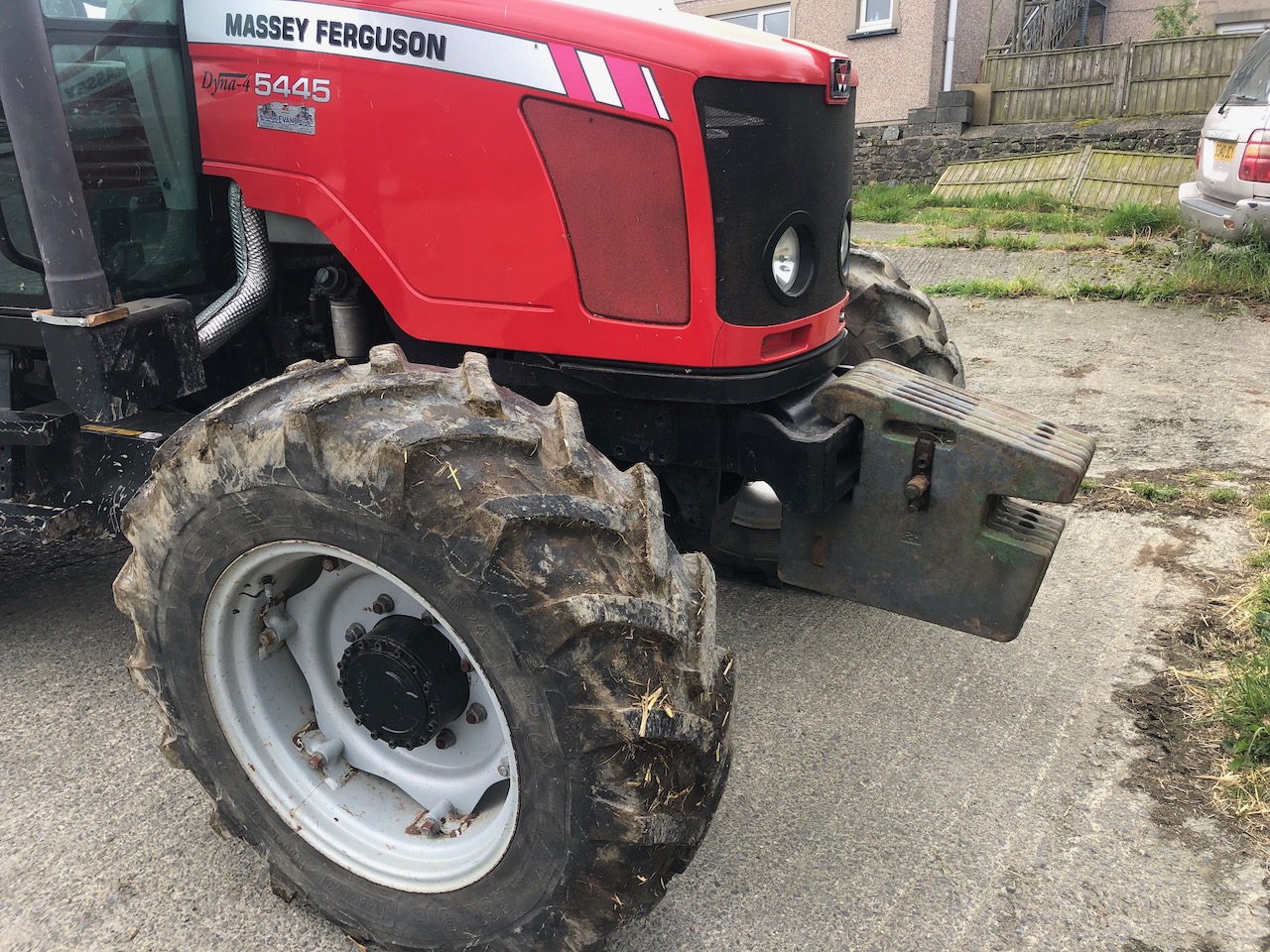 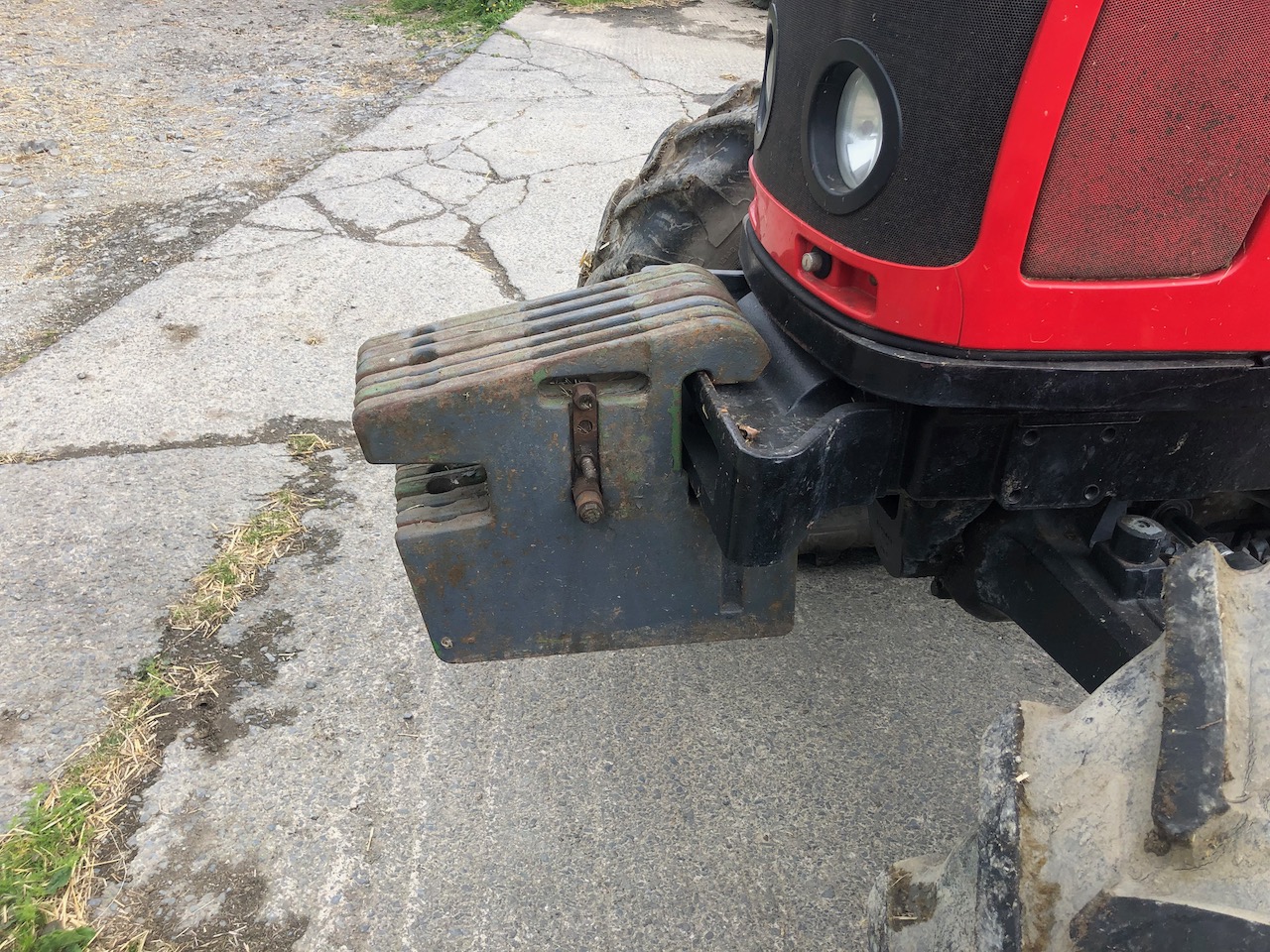 I remember that I did use them before on this tractor when spraying with the 1000litre mounted machine on steep land.
R

Having had a set of weights come off before we wanted to put these on 100% correctly and tight. Just need some time to spray them black now.

Which reminds be that even though there’s a round bar holding my JD weights through the vertical centre hole on the MF carrier, as [not seen] in the picture above, I doubt whether the thinner than JD bar necessary to fit is enough to stop the weights falling off as an unit if bounced with enough energy. The reason being that the gap underneath the block of weights is slightly more than the depth of the lip where they hook on. Therefore a 6mm flat bar should be secured as a spacer between the bottom of the carrier and the weights across their full width. This can be drilled and the carrier tapped upwards to permanently secure the spacer bar by two bolts so it need not be removed and refitted with the weights. This is not shown in the pictures, mainly because I hadn’t thought about it at the time [which is how accidents could so easily happen]. It has since been fitted but a temporary means of holding the flat iron in place is used so far.