JOURNEYâS END FOR PETE: THANK YOU AND AU REVOIR

JOURNEYâS END FOR PETE: THANK YOU AND AU REVOIR 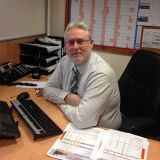 For 45 of KUHN Farm Machinery’s 50 years supplying quality agricultural equipment throughout the UK, Peter Morris has been ever-present.
When he joined to take responsibility for spare parts in 1976, he was KUHN’s fourth employee. The company then had modest premises at Bridge Road in Wellington and offered a small range of grass machinery and power tillers.
KUHN UK’s turnover in those early days was less than the value of one self-propelled diet feeder in the current price lists that have in recent years been so expertly compiled by Peter. It’s fair to say he’s seen a lot of change and quite significant progress during his career.
We caught up with Peter on the cusp of his well-earned retirement to record some of his memories of a career in farm machinery.
Game-changing machinery
Asking Peter for a favourite KUHN machine was perhaps a little unfair for somebody who has witnessed machines and models running into the hundreds if not thousands during his time, but he’s quick to highlight the power harrow as a stand-out implement.
KUHN sold its first power harrows in 1980 and by 1996 was delivering over 1,000 units per year onto UK farms.
“Power harrows provided a major breakthrough for KUHN through the 1980s and 1990s,” recalls Peter. “The KUHN machine has always been built to last and this went a long way to establishing our reputation for strength and reliability.
“There was significant demand for four metre machines in the 1990s, and we developed a transport kit for these wider machines to allow UK farmers to have the working capacity they wanted whilst still being able to comply with road transport regulations. KUHN UK was also directly involved in the development of the first six metre folding power harrow, which was another breakthrough machine.”
Peter has seen sales of power harrows continue, with combination units incorporating the Venta pneumatic drill remaining a sector-leading implement. He has also been involved in KUHN’s move towards minimum tillage, with a range of min till cultivators and drills now offered alongside more conventional soil preparation and crop establishment equipment.


When KUHN UK acquired its first delivery lorry in 1983, Peter grabbed the opportunity to fulfil a long held ambition by gaining his qualification as an HGV driver and hitting the open road.
Undaunted by the prospect of taking out the Volvo F7 with its full steer trailer for the first time, he set off for J L Maltby in Newark with a load of eight 3 metre power harrows.
“With hindsight it was maybe a little bold to be driving an 18 metre unit with that kind of load for my first trip, but the journey to Lincolnshire and the delivery all went without a hitch,” recalls Peter. “Unfortunately, on the way home there was a glitch with a control valve and the drag trailer brakes became stuck on at a set of traffic lights. I lost count of the number of times the lights when green and then red, and then green again, but I eventually managed to sort the problem and we made it back to Shropshire in the end.”
Despite this early frustration, Peter enjoyed his time as a ‘trucker’, recalling the early starts to deliver machines and to get back to do a day’s work in the office. Sleeper cabs in the 1980s clearly weren’t what they are today, so nights out were kept to a minimum.


Meeting dealers was one of the best parts of the delivery driver role that Peter once fulfilled, and he also spent time on the road visiting parts managers. In the 1980s and 1990s this involved an annual three week tour to visit all the depots to carry out a review of all orders and sort out any issues.
“Very few dealers had any kind of system at this time, with most operating on a hand-to-mouth basis when it came to spare parts,” explains Peter. “This annual visit was an essential way of keeping track and building a picture for the future.
The hospitality could sometimes make the trips even more worthwhile, as Peter recalls when visiting farmer Ray Westaby, who ran a small dealership alongside the farm business.
“Lunch with Ray and his dad involved sitting down around a big kitchen table with a large joint of beef and a slab of bread,” recalls Peter. “There was little refinement, but it was always a delicious meal.”


Trips to France have always been part and parcel of working for KUHN UK, but - unlike today with a choice of flights and airports - Peter recalls some interesting drives to Saverne and back.
“My very first trip almost foundered on the way out at the Calais ferry port. I was with Dennis Hollins and the two sales managers at the time, John Perkins and Jack Parsons, all four of us in the company car, a Mark 3 Cortina. John drove us off the ferry and forgot that the French drive on the other side of the road and promptly beached the car on a concrete bollard, leaving us stranded with half of Calais looking on. Not the most prestigious start to a trip.
“The second time over was a little slicker, however. I think it was around 1981 and we’d gone across to help train a group of Americans on how to upgrade the new FC 66 mower conditioner. I shared the journey with Bernard Parker and Clive Bolderstone, with one of us driving and the other two acting as look-outs. On the return journey we left Saverne at 3pm, made Dover by 9pm and were home in Shropshire by 1am. We had a 2.3 litre Ford Granada back then and managed to cover 200 miles in two hours on the French motorways.”


Like many stalwarts of the UK farming industry, Peter has fond memories of the Royal Show at Stoneleigh and the old Dairy Event at the same venue. Most of all, though, he recalls the Smithfield Show.
“Driving the truck through central London, looking for Earl’s Court on set-up day, was always an experience, and the show itself involved some long, hard days,” he says, “but the opportunity to meet so many dealers and farmers was always very rewarding.”
During its heyday, the Smithfield Show marked the end of the day’s business by playing the National Anthem over the public address system. On one occasion, Peter was talking to a farmer as the anthem was playing, and – not wishing to be rude – allowed the conversation to continue, and continue, and continue. When he finally concluded the business, he found himself alone on the KUHN stand, with little idea of how to find the hotel. Wandering around London for several hours, in the rain, was not the best way to end a hard day at the Smithfield.
“The worst part was that we were giving away branded umbrellas on the stand, but I didn’t take one with me!”


Over his time with KUHN, Peter has enjoyed the company of all his colleagues, past and present, highlighting the fact that people in the company always get along well.
“It’s hard to single anyone out as I’ve been lucky to work with so many that I have liked and respected,” he says, “but it’s fair to say that I learned most from my earliest experiences working with Dennis and Cath Hollins and also John Barnett. I gained a work ethic in the early years that has stuck with me throughout.”


For Peter, retirement is filled with opportunities, more so once coronavirus restrictions are lifted and there is greater freedom to meet others and travel. In the short term, there’s a guitar that he’s intent on learning to play, and pencils and paper that will allow him to refresh his passion for drawing.

You can read this update from Kuhn Farm Machinery on TFF's AGVendor...
Click to expand...