With inclement weather throughout summer this year, grain filling was seemingly affected. The average specific weight of UK flour millers Group 1 varieties, at 75.4kg/hl, is the lowest since 2012 (70.7kg/hl). Beyond 2012, you must look back to 2004 for the last time the average specific weight of Group 1 samples failed to meet the milling specification of greater than or equal to 76kg/hl.

Looking at other quality measures, wheat proteins are averaging 13.3% across Group 1 samples. The average of the Hagberg Falling Number is 286s, the lowest start to the Cereal Quality Survey results since 2017. This arguably reflects the stop-start nature of this year’s harvest.

It is important to look at the proportion of Group 1 samples meeting a “typical” Group 1 specification (specific weight ≥76kg/hl, HFN ≥250s, protein ≥13.0%). The proportion meeting specification at 23%, is down nine percentage points on last season. 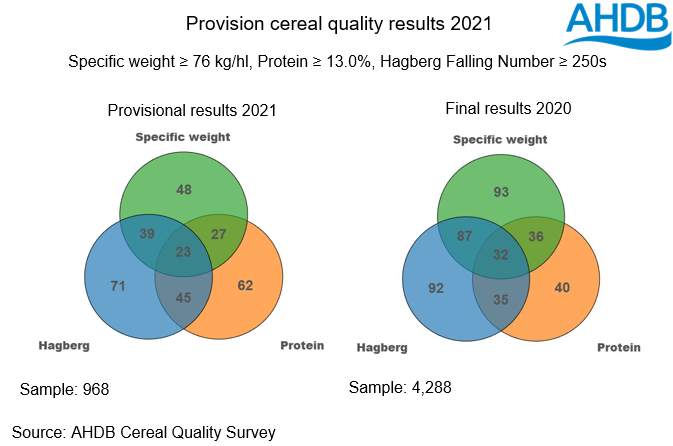 The early signs of challenging quality for UK millers this season, supports the strength we’ve seen in milling premiums so far. So far in September, ex-farm milling premiums are the highest they’ve been for six years.

Nitrogen in spring barley samples is significantly lower year-on-year. The average nitrogen content of spring barley samples, at 1.45%, is down 0.38 percentage points from the first survey results last year. It is worth noting that there is a high volume of Scottish samples included, which were not seen this time last season. The lower nitrogen requirement for distilling markets, a key part of Scottish barley demand, is likely pulling the average down.

Average specific weights across both winter and spring samples are down year-on-year. Again, this may reflect the large volume of Scottish samples included in the data.

Screenings are notably high this year. In winter barley, the proportion of barley retained by a 2.5mm sieve is 85.3%, this is 8.9 percentage points lower than the same point last season. Screenings in spring barley samples are better, but still down on last year.

Low specific weights a problem for wheat
For information on price direction make sure to subscribe to Grain Market Daily’s and Market Report from our team.