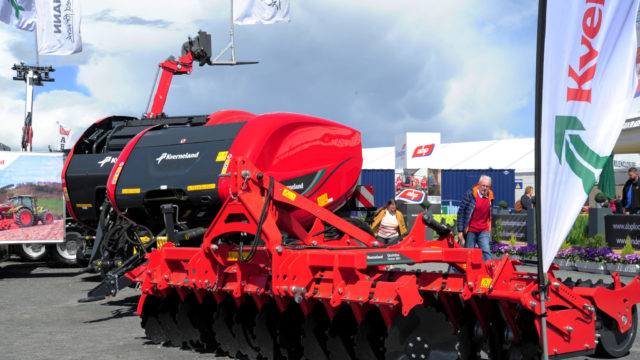 With shows now thankfully being held again, Balmoral has once more taken its place as the main event at which dealers and manufacturers can show off their latest products.

The first day was one of sunshine and showers but that didn’t deter the large crowd that turned up to view what was on offer.

The feedback from exhibitors was that it was going to be a worthwhile show with strong expressions of interest from the farmers attending, clearing the doubts of just a couple of months ago.

As always, it was not possible to talk to all the exhibitors but Agriland managed to chat to a few to get a feel for the state of the machinery trade this spring.

The message from Vicon is that thanks to the increase in fertiliser prices, many more farmers have discovered that here is a good deal of sense in fitting a GPS system after all.

The company can supply spreaders and all the electronics to go with them, but only as factory fitted options as there is a good deal of adaption to make them compatible with guidance systems. 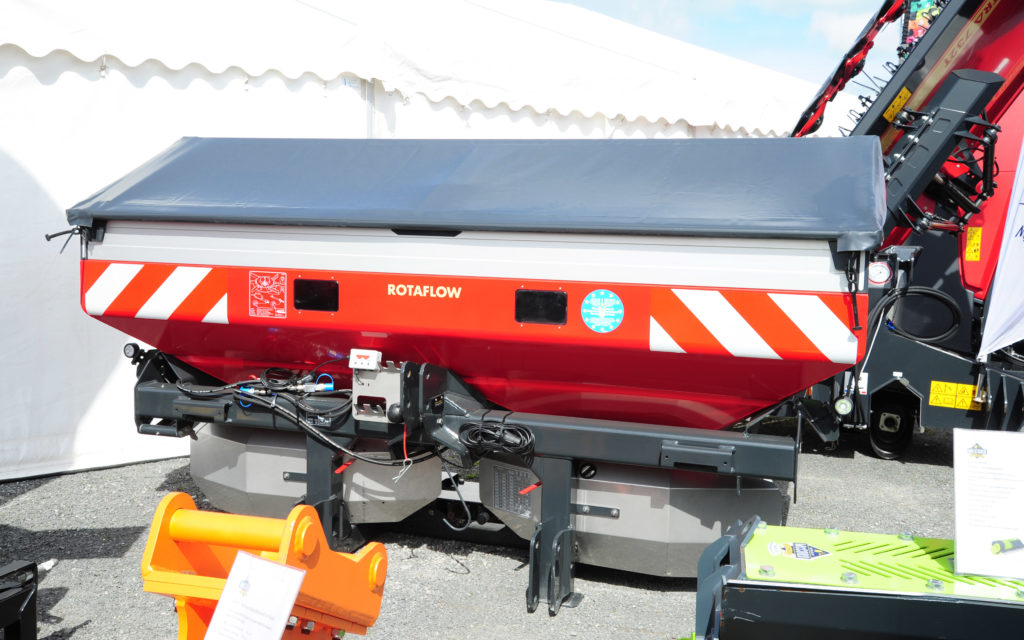 A limited number of conventional spreaders are still available, unfortunately upgrading them to GPS compatible machines is a long and expensive business

All GPS enabled stock has been sold this season with many farmers having missed the boat and are now having to wait until next year before they can obtain the latest equipment.

Meanwhile, conventional spreaders without variable rate or section control are still available in small numbers. These include the pendulum type which still retains a strong following, around 150 are sold in the UK each season.

Alexander Mills of Co. Tyrone was representing Kuhn at the Balmoral Show.

Taking up a large part of its stand was a Merge Maxx 1030. This is one of the wider models of mergers, or belt rakes, available with a working width of 10.3m. It is claimed to be working well in Irish conditions. 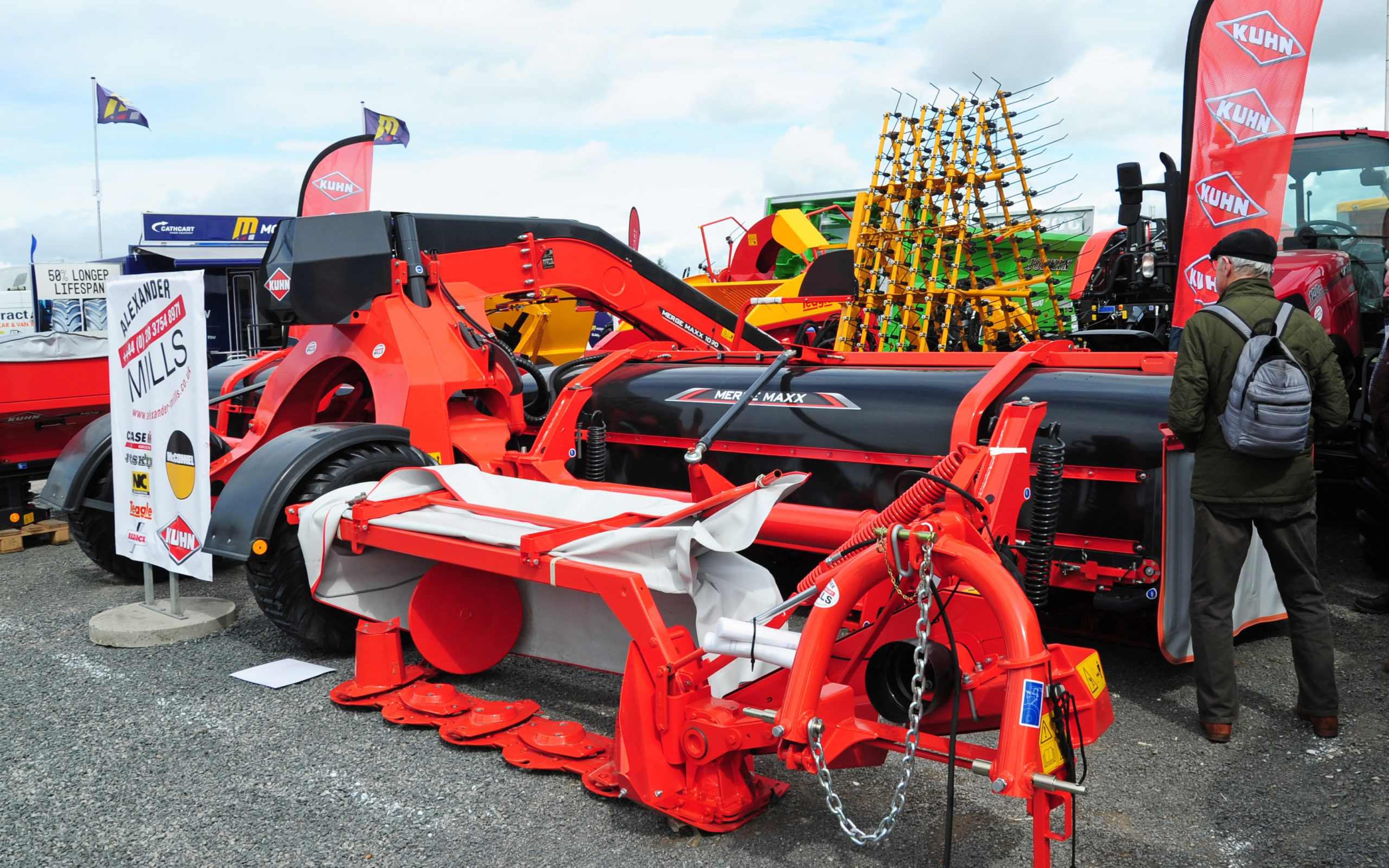 The Kuhn Merger, or belt rake, is already operating successfully in the North

Otherwise, the company remains optimistic about trade this year despite the supply problems and uncertainty over prices.

Farmers are still investing in new machinery while they can and despite some doubts being expressed earlier in the year, the interest in buying new machinery is still strong.

Kramer had two major items to feature at the Balmoral show. 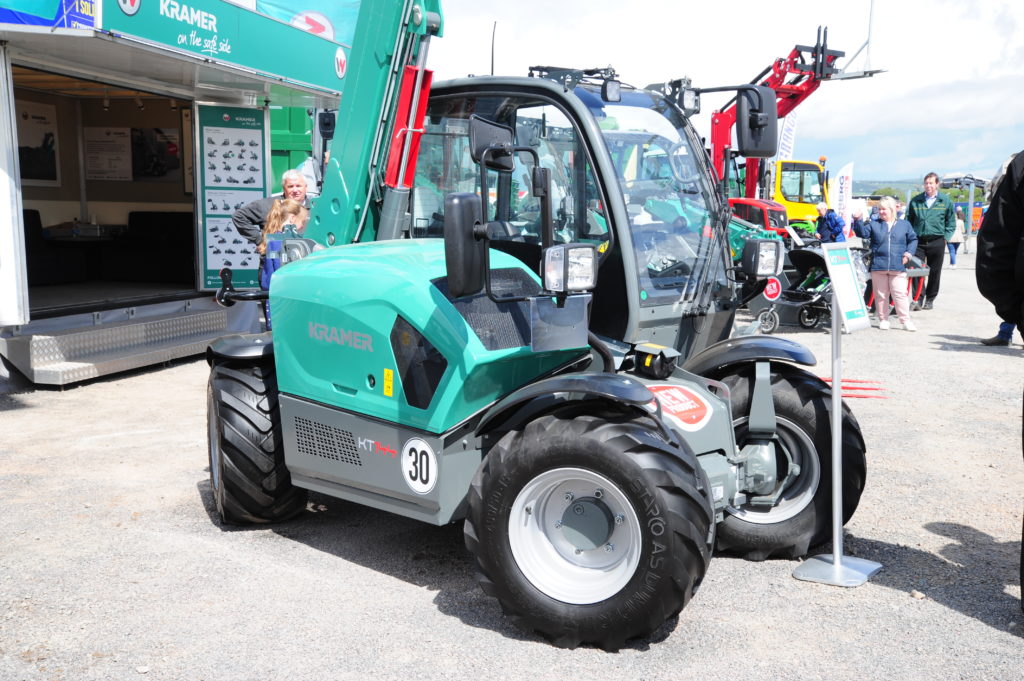 The second item is the company’s new Smart Attach system, which may be rather less conspicuous but it could turn out to be a far more fundamental development and is reviewed elsewhere on Agriland.

Tyres are one of those items that rarely spike interest unless you find yourself with an immediate need for them.

An unfortunate state of affairs as there is a great deal of thought and technology which goes into improving these indispensable items. 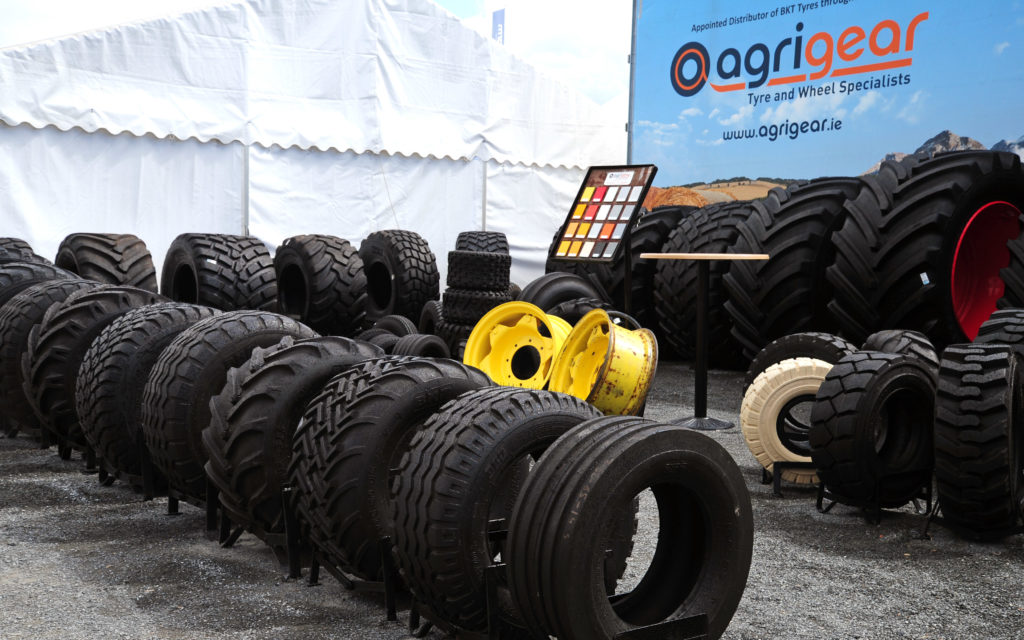 Agrigear is the main agent for BKT tyres, which, like all tyre companies is struggling to produce its full range in sufficient quantities

Agrigear of Co. Cavan had a good range on display although there exist supply issues on the more specialist types and sizes.

There is no immediate solution on the horizon. Hold ups in both the supply chain and production process have caused a restriction in choice, whether it is specifying a particular type on a new machine or replacing rubber on existing tractors and implements.

Manufacturers and dealers are naturally keen to present everything as new, original and exclusive to themselves. Yet tractors and implements just didn’t appear on the scene by magic, they usually emerge from a long legacy of invention and development.

Modern crop sprayers are a case in point, and on the stand of the Massey Ferguson Club at Balmoral, there stood a bright yellow TE 20 complete with a very basic sprayer. 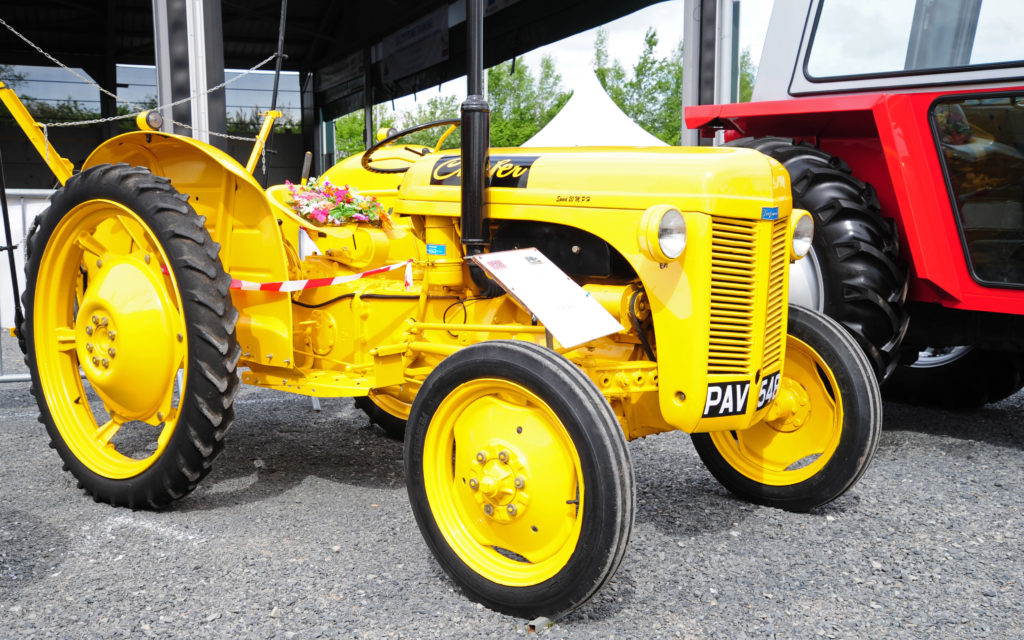 There is not too much known about this tractor, however, it is thought to have been built by Chafer in the 1950s as an early self propelled sprayer, machines which the company still makes today.

Other than its colour, the addition of a small spray tank and boom, and the fitting of narrow wheels, thought to be from a seed drill, there does not appear to be much modification to the original unit.

It makes an interesting change from the usual range of much loved little grey Fergies seen at rallies and this one is currently for sale.

With the spotlight being very much on quad safety, their reputation has been taking something of a hammering of late, which, it might be thought is something of a concern to Quad X, a company that specialises in trailers and implements for these workhorses.

Nothing could be further from the truth.

The range of machinery suitable for attaching to quads generally fits equally as well on to, or behind, UTVs.

Indeed, with UTVs becoming much more a small tractor with their greater carrying and towing capacity, it is likely than demand for the appropriate implements may well increase. 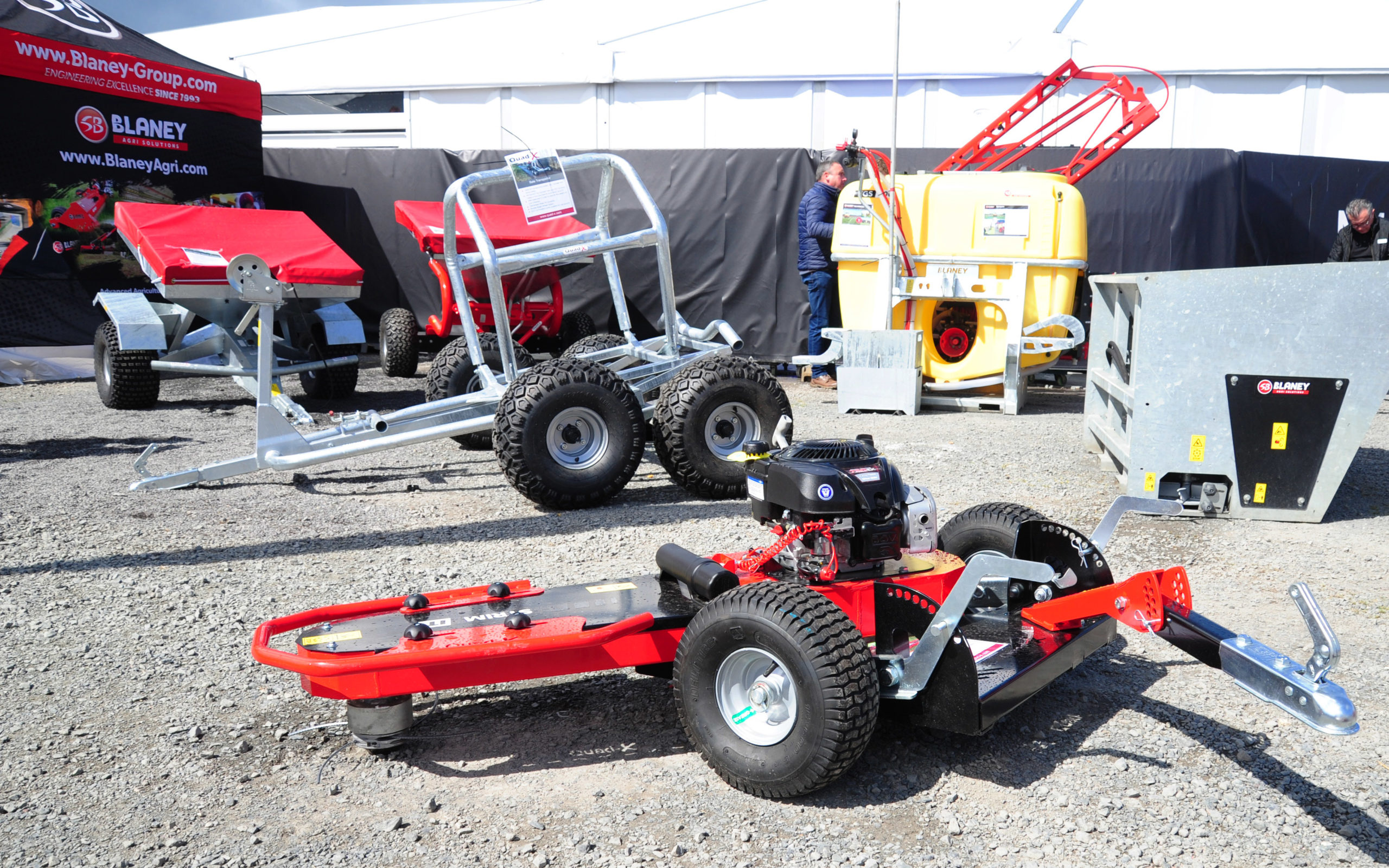 Quad-X is constantly expanding both its manufacturing capabilities and product range with some innovative items that have been designed in response to market needs.

One such is a strimmer developed for large estates and properties open to the public. It is designed to run offset to the towing vehicle while strimming alongside fences.

A guide bar set above the spinning hub moves it away from the posts or other objects wherever they are encountered.

UTVs have developed something of reputation for being a good deal more expensive than quads, which, as Kawasaki would point out, is a little unfair as its popular petrol powered models are priced in the same region as its top end quads. 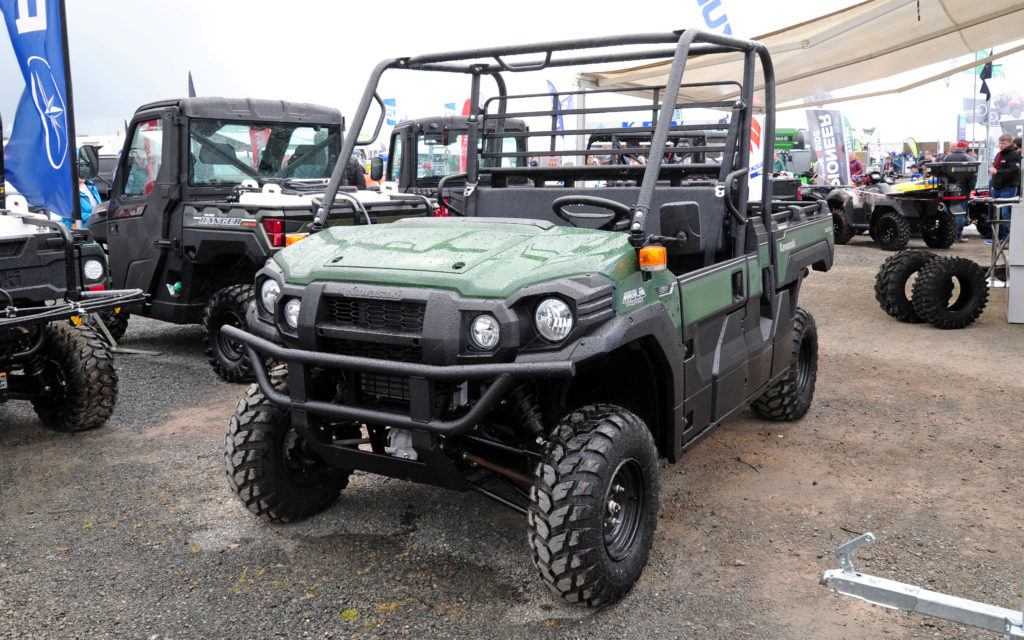 Powered by a 24hp Yanmar engine, the company’s diesel powered Mule is available with full cab and heater

Starting at around £9,500 for the 700cc single cylinder petrol model, the company’s UTVs make a strong case for trading up from the exposure and limited carrying capacity of a big quad.

Although best known for its motorcycles, Kawasaki is also a strong player in the utility vehicle market with machines that have been developed over the years.

Lely, it may be thought, dropped out of machinery manufacture altogether with the sale of its grassland equipment business, but the company is gently re-entering the scene with its automated feeding and slurry management tools.

These are direct competitors to loaders, mixer wagons, scraper tractors etc, and may constitute the quiet advance of automation in a way that does not involve autonomous tractors or other field robotics. 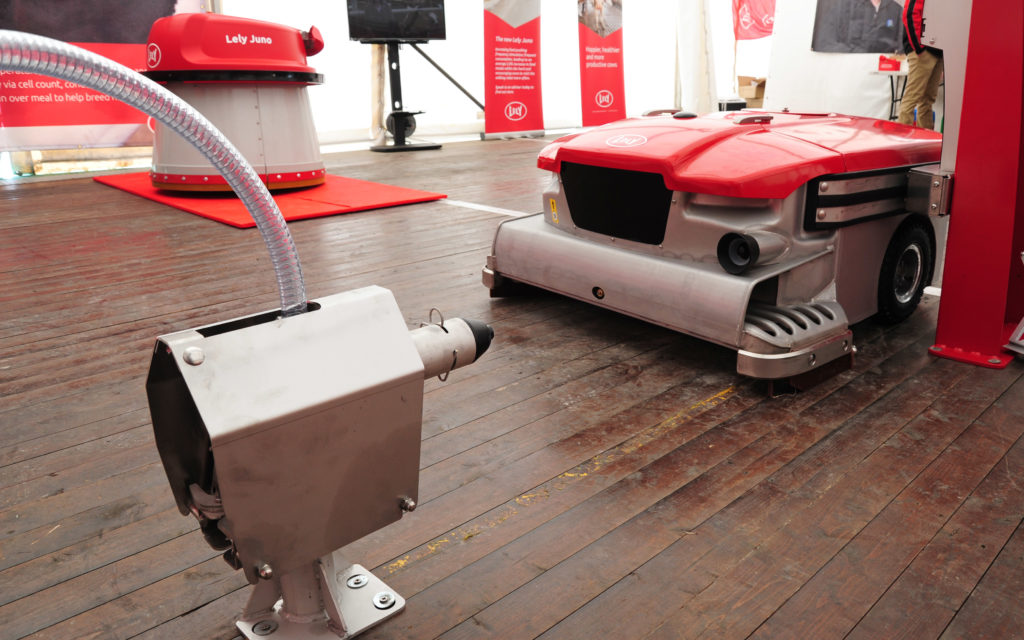 The Lely Discovery 120 Collector can discharge through the slats in a shed floor or via a dedicated discharge unit, as shown here

The humble task of cleaning sheds is now possible using self emptying units that roam about vacuuming up the muck from the floor.

It is a completely different approach to making rakes and balers and the company’s decision to make a clean break from traditional agricultural engineering becomes all the more understandable.