The Bi Som Trac is hardly as well known as the Doe Triple-D from Essex in the UK, but this French built machine represents the pinnacle of tandem tractor development and remains a fearsome beast in the field.

Tandem tractors date from the time when not only engine power was limited, but also the necessary components to transmit that power to the ground. Coupling two together, to be driven by one person, made a lot of sense.

More than the sum of their parts​

Earnest Doe and Sons of Essex are regarded as pioneers in this area, but it was also tried by others such as Bolinder in Sweden and by a Someca dealer in France who went about the project in a manner very similar to Earnest Doe. 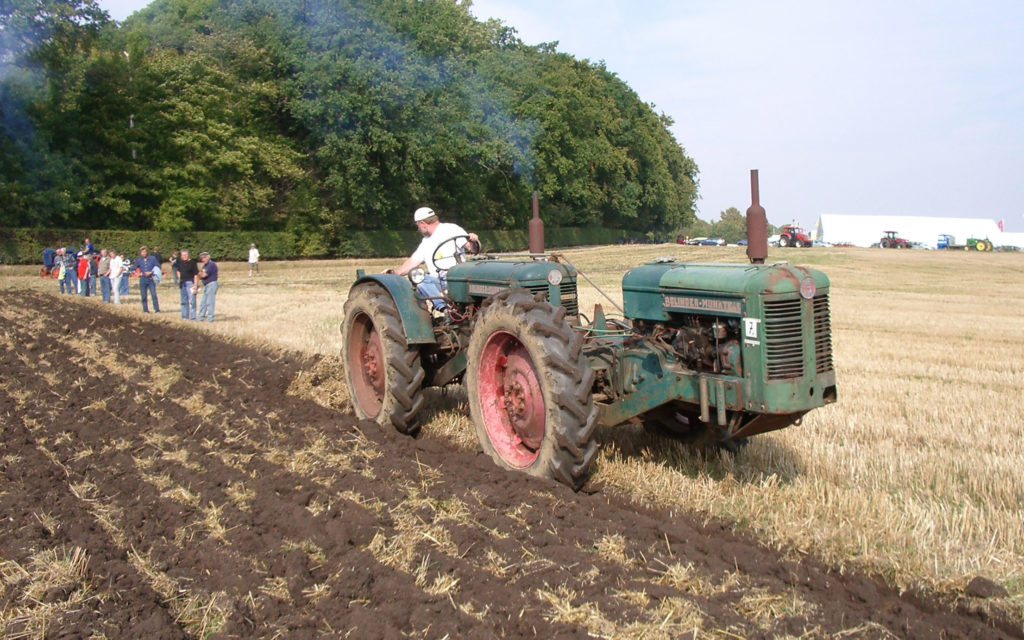 Bolinder experimented with the tandem concept. The prototype was built by a local engineering company on its behalf

Back in the 1950s and '60s, the demand for horsepower and grip was as great in northern France as it was in the UK, and by doubling up two 45hp tractors, a 90hp machine could be produced with traction being provided by four large wheels.

The logic was impeccable, and it is suggested that such conversions were not as uncommon as we might now think.

It is also noted that many of these conversions were designed to be uncoupled when not required, leaving two tractors free for lighter duties.

There are accounts of local engineers and enthusiastic farmers creating their own variations on the theme from various makes of tractor, although few originals, if any, exist today. 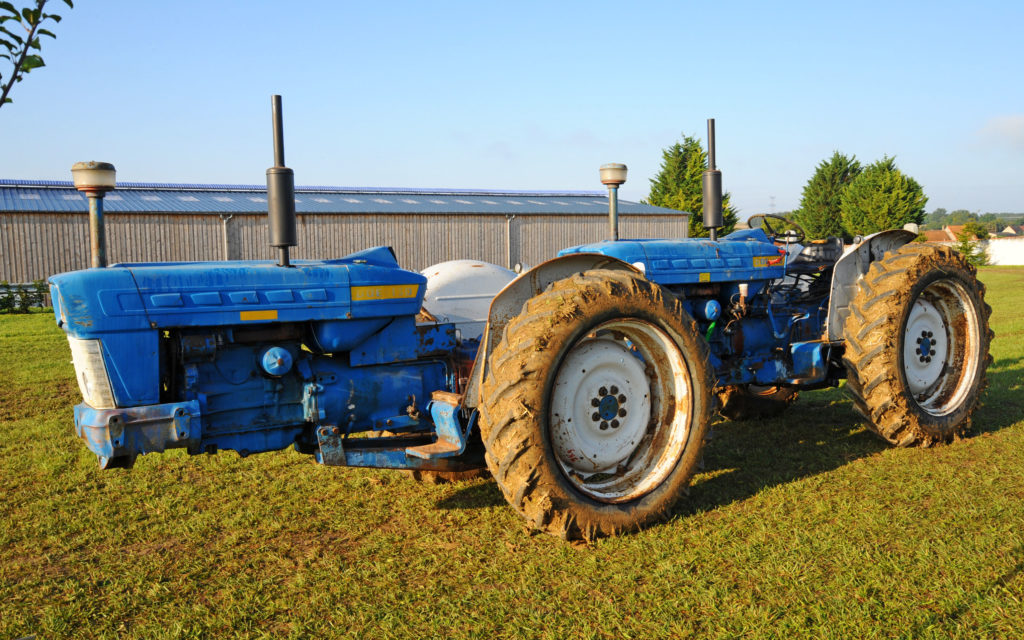 The Doe Direct Drive, or Triple D as it was more commonly known, was first created by a customer

This was indeed the case with the conception of the Doe Triple D which was based on a conversion by one of the company's customers who connected two Fordson Power Majors together and subsequently asked Doe's to build a better version, giving birth to the legend.

The Doe Triple D was intended to be kept as one unit, yet many were separated in later life to release two smaller tractors, with a greater sale value than the original machine.

The French company concerned was Ets Lhermitte, which was then a Someca dealer just to the west of Paris; it now has six branches and holds the John Deere agency for the region.

Like many continental companies, the name Someca is an acronym rather than taken from the founder; in this case it stands for SOciété de MECAnique de la Seine. 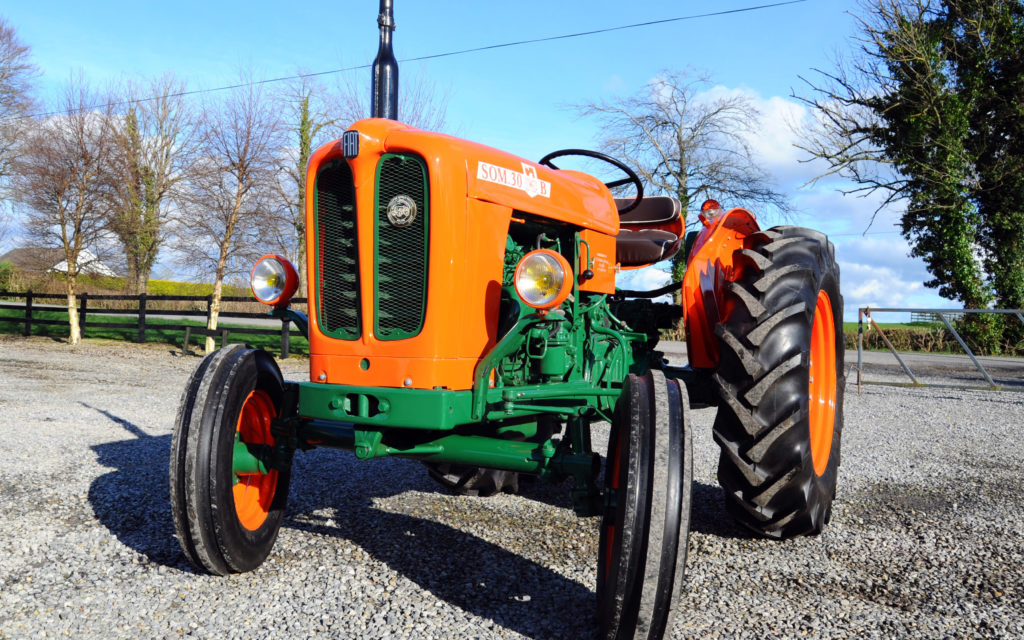 Someca 30B from 1961. Around 40 were believed to have been imported to Ireland. This very nicely preserved example belongs to Alan Mitchel, Co. Offaly

It was established in 1951 to assemble tractors built under licence from Fiat (another acronym) as an offshoot of Simca (acronym again), which had itself been created to make Fiat cars in France in the 1920s.

In 1957 it had its first real success with the launch of the Someca 40 which proved to be a hugely popular tractor throughout France.

As excellent as these machines were, the customers of Ets Lhermitte required more power to cover the larger fields of the French plains more effectively. 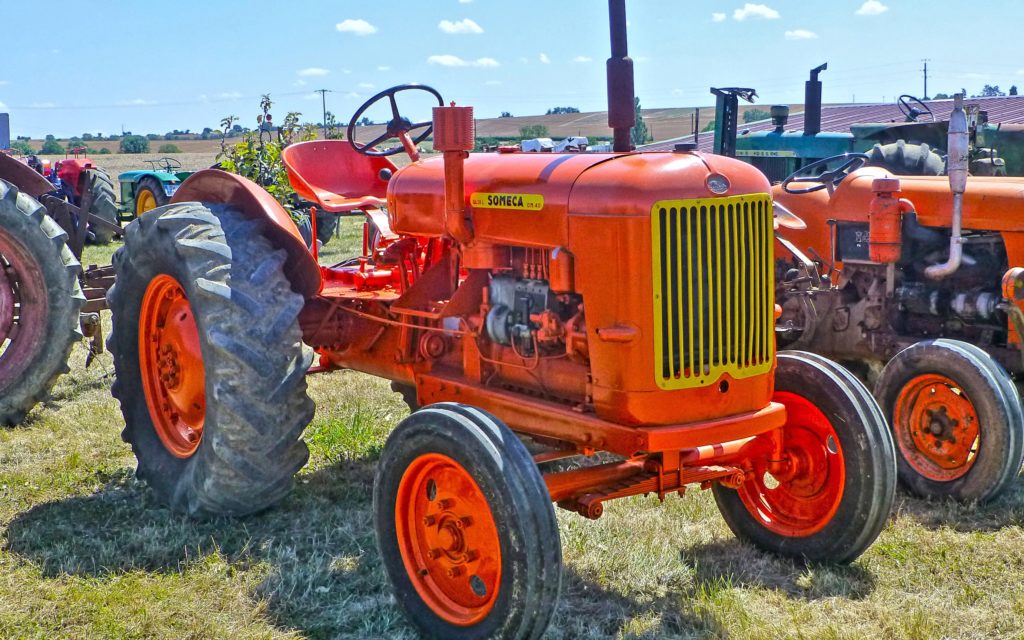 The Someca 40 established the brand in France

An earlier trip to the UK by company staff had introduced them to the Triple-D and so it was after that the Bisom 40, two Someca 40s in tandem, was created in a bid to meet the demand.

Although we may not be absolutely sure today, it seems that while the Triple D was created to provide the traction to more effectively plough heavy Essex clays, the purpose of the Bisom 40 was to provide extra power for all cultivations. 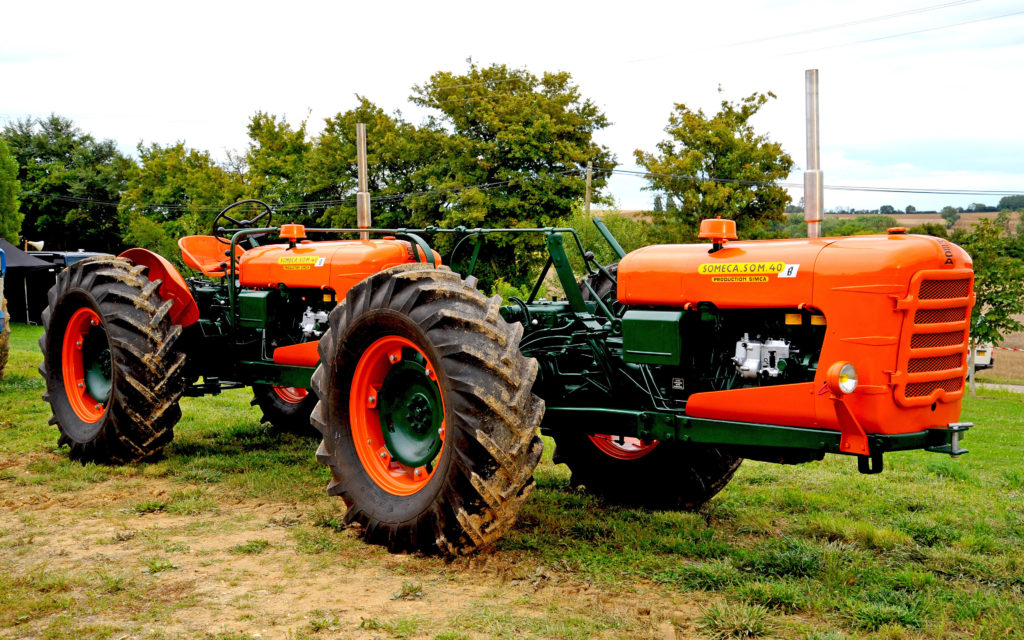 In both cases, the existence of larger implements to cope with the power available became an issue and so their use was limited to a certain extent.

This would certainly help explain the ease of decoupling the French machine which, with practice, would take no more than an hour and a half. 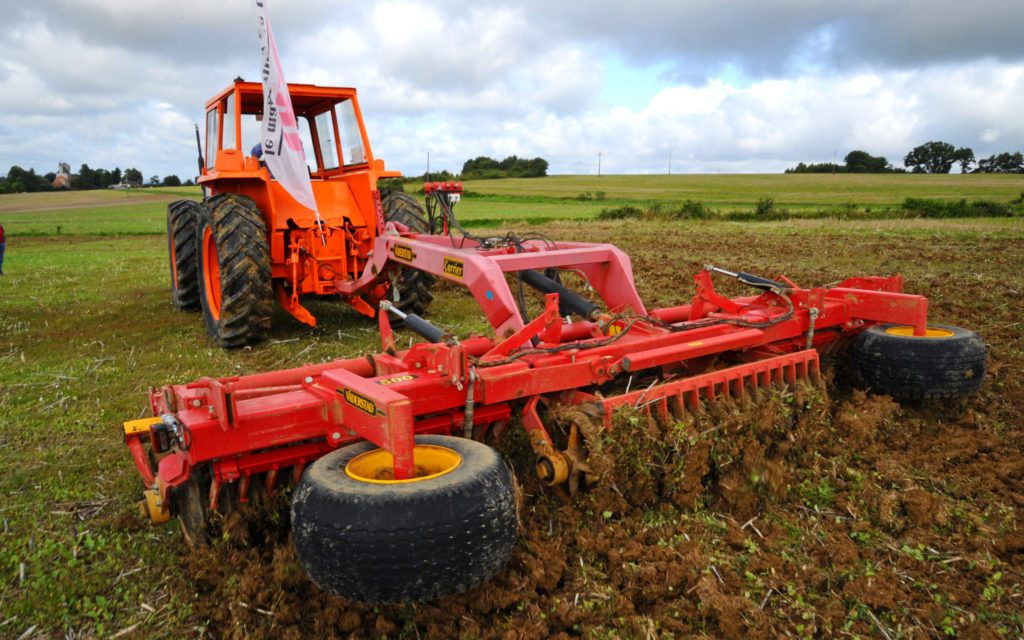 There was also the problem of the PTO - despite having over twice the traction, due to all the weight being supported by drive wheels, power at the shaft was limited to whatever was available from the rear unit.

Fading from the scene​

Although the first Bisom 40 first appeared around 1969, it was not clear when production finished, although, being a side line to the main business of selling Someca tractors, there may not have been a well defined production line or schedule.

The Someca 40 was discontinued in 1964 and it is believed that some time later, Tandem models were built based on the 55hp Someca 511, but again, with tractors morphing from single to tandem units and back again, it would be difficult to pin down the exact history. 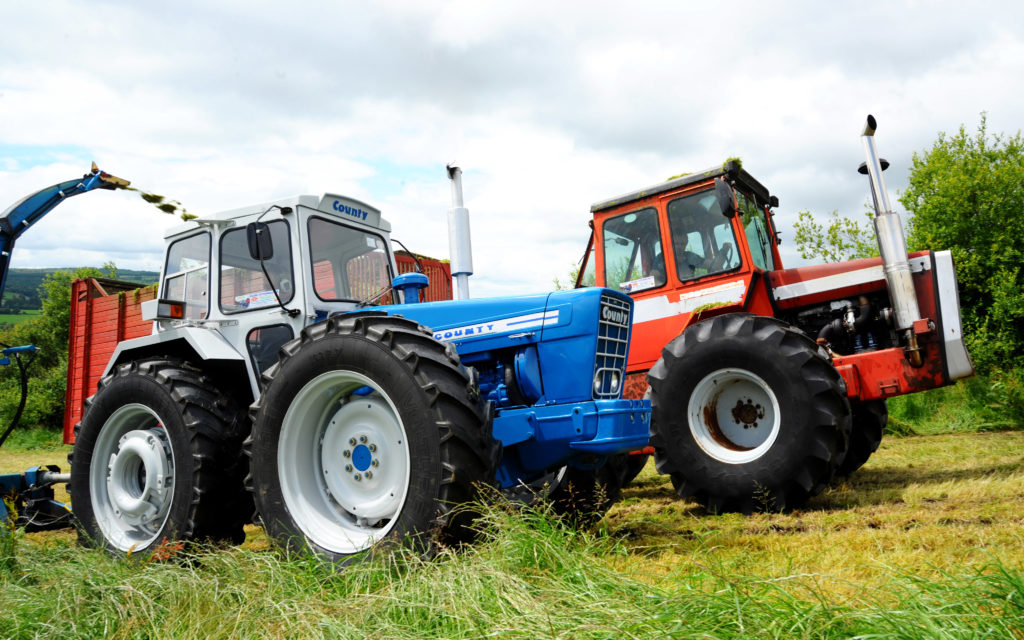 By the late 1960s, other manufactures joined the equal four wheel drive club including County and, somewhat later, Massey Ferguson

However, throughout the 1960s, standard tractors were becoming more powerful, eroding the benefits that these tandem units provided.

Production of the Doe Triple-D finally came to an end in the late '60s with two Ford 5000 units providing 150hp. Over 300 had been built in total.

This might have been considered the end of the idea, but it was briefly revisited in France in the 1980s where a few Fiat-based machines were created and sold as Bi Som Tracs.

These were dedicated tandem machines which were not designed to be split. They relied on Fiat six-cylinder units of 100hp each with the articulation point immediately in front of the cab. 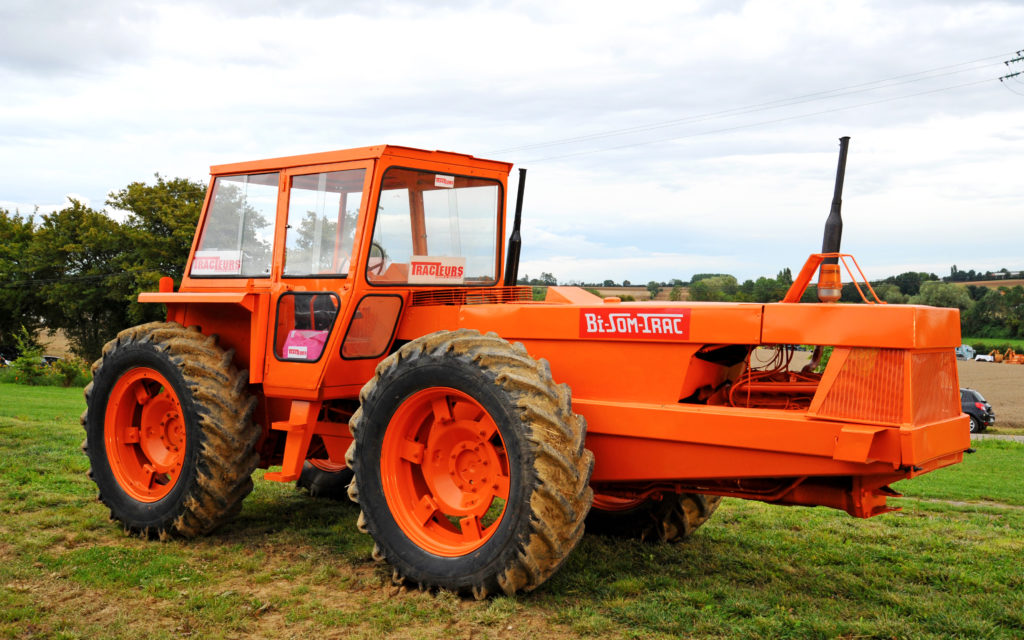 Traction and performance was said to be outstanding, but the long nose was its undoing, even on the large flat fields of its home territory.

It required a lot of space to turn and the sump of the front engine was vulnerable to uneven ground, especially when passing through gateways.

Damaged engines and oil spills were not uncommon and only a few were built, two of which are still thought to exist today.

The example shown here belongs to Jean Pierre Noret who was showing it at the Retro Moisson event, held every August in St. Loup, central France.