The Farmall C series of tractors has always been targeted at the more modest sized farm, or those with jobs requiring a less than average power output.

This does not mean, however, that its model development is neglected and Case has just announced a major upgrade in the form of a new engine for the four models in the range.

The new engine is an enlarged version of the old block. It now has 3.6L capacity rather than the previous 3.4L. Yet the biggest change lies in the head which now boasts four valves per cylinder. 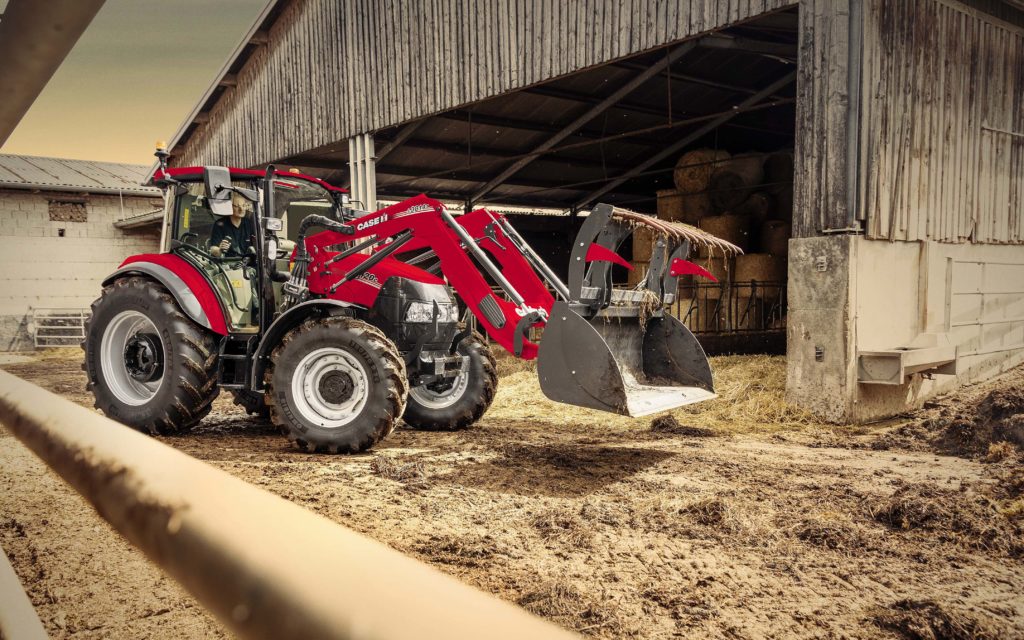 By switching to a 16-valve, the company claims that it has improved performance by the way of a 5hp hike in power levels and a 10% increase in torque at the lower engine speed of 1,300rpm.

It has also helped the company’s engineers to meet Stage V emission standards, although that is as much dependent on a new exhaust treatment package as it is engine design.

Case IH is getting ever more savvy when it comes to fitting emission control systems to its products.

Rather than just bolt on whatever devices may be required to push the figures below the prescribed level, it has, instead, brought three of the methods together in one unit which it calls the ‘FPT Hi-eSCR2 solution’.

This box of tricks integrates a diesel oxidation catalyst, a maintenance-free particulate filter, and a selective catalyst reduction unit in a single compact layout.

Case claims that as a result, the bonnet stays low and does not impede visibility from the operator’s seat, while manoeuvrability and ground clearance remain uncompromised by bulky additions to the engine block.

In addition to this, the engine uses a low rate of exhaust gas recirculation, less than 10%, which helps optimise combustion and minimises the dimensions of the selective catalytic reduction system.

The Farmall C tractors will also be available with a reconfigured ‘Selection Pack’ of options. 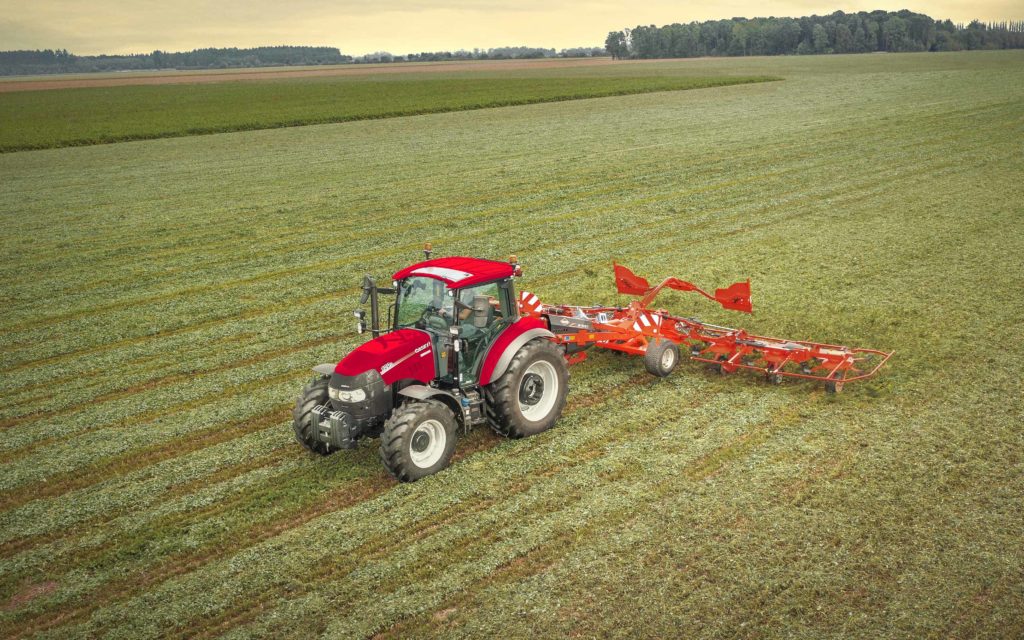 The Farmall C has three new levels of options and finish

These include the Active Drive 2 transmission with powershuttle and powerclutch, providing up to 24 forward and 24 reverse gears. There are also optional cruise control and creep speeds.

Other features included in the packages are front and rear axle electro-hydraulic differential locks, electronic draft control and a 64L/minute hydraulic pump. A three-speed PTO and front linkage may also be specified.

There have also been changes to the Maxxum and Puma ranges although nothing so dramatic as a new power plant. 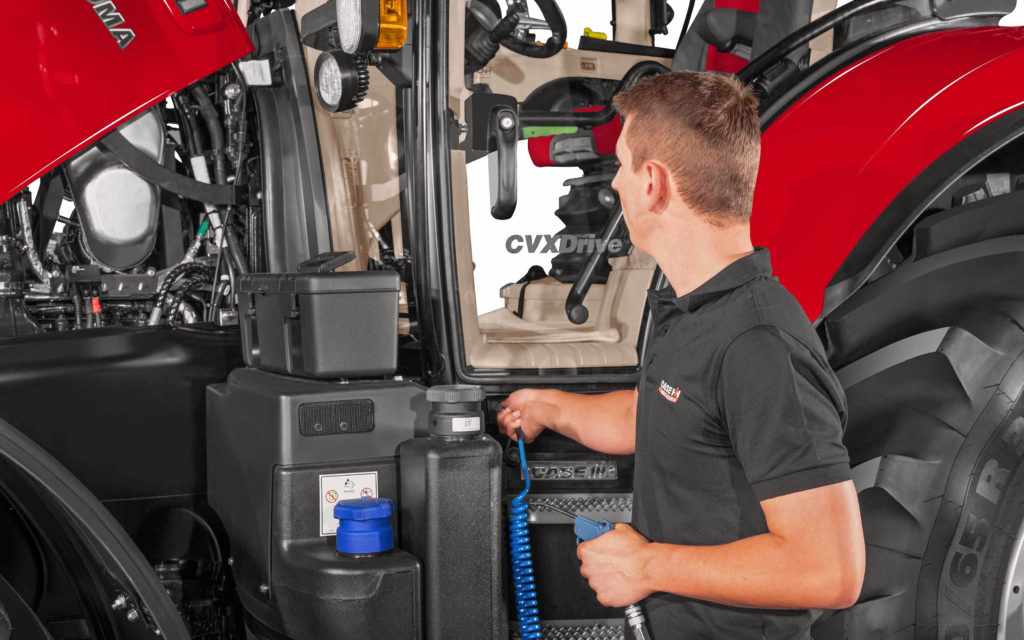 Most of the developments involve updates to the trim and options packages with some adjustments to engines and transmissions.

Extra power for the Maxxum six-pot​

It is just the top end Maxxum 150 which has a six-cylinder engine and this has received an extra 5hp to bring it up to a rating of 150hp without boost.

This now differentiates it from the four-cylinder Maxxum 145 which remains, as its name suggests, at 145hp. 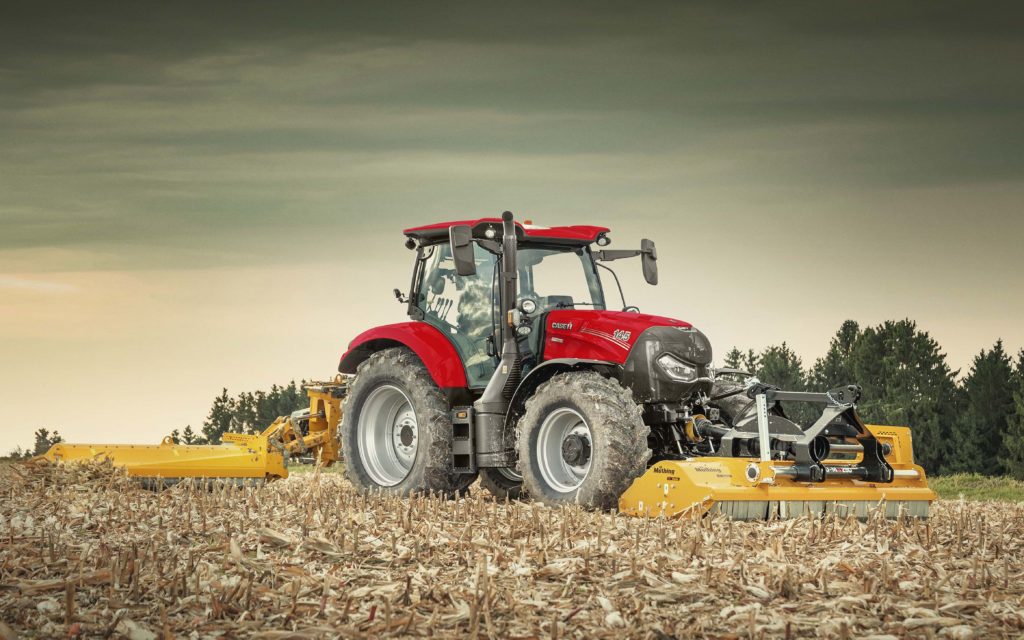 Other than that, the changes are applicable across the board with the three specification packages of Maxxum, Maxxum Multicontroller and Maxxum CVXDrive staying as they are.

Other improvements are mainly focused on the cab. They include Magnum style steps to ease entry for the operator, along with a mount, a tablet mount and USB ports.

Visibility is enhanced by a new wiper with a 60% increase in cover while ergonomics are said to be improved.

A cool box is available and ‘automotive type’ trim is used throughout. This may be complemented with a leather steering wheel, should the customer wish.

The Maxxum CVXDrive models have received attention to the transmission operation. This has been fettered to improve driving characteristics. Drive pedal sensitivity has been improved, as has the throttle response when using the shuttle lever.

On the outside there are changes to the top link stowage and hydraulic connections to enable easier use while new LED marker lights are also fitted. 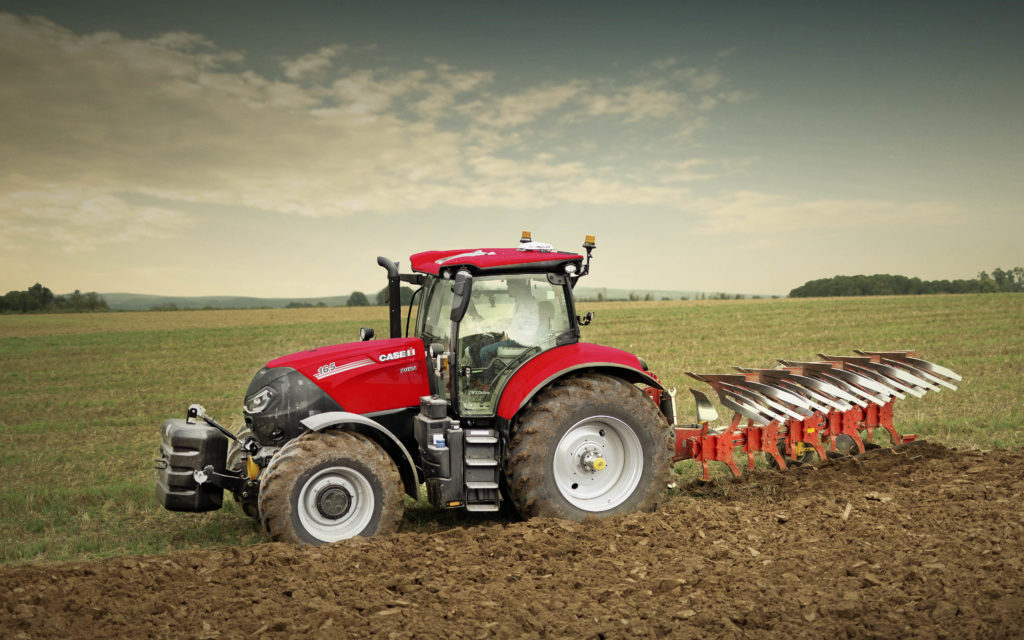 Inflating tyres and chasing dust around the cab or out of balers may also be undertaken away from the workshop, thanks a new air-line connection.

Smaller Pumas get the upgrades​

The four smaller models of the six-cylinder Puma range cover a power band of 140hp to 175hp. They have enjoyed the same improvements as the Maxxum series with identical upgrades to the cab.

There are now three new trim packages. The first is the Selection Package, this is for entry level Puma140-165 models meeting all the essential requirements of most farmers.

Further up the scale, the PumaMulticontroller and Puma CVXDrive tractors had the choice of with two packages, Advanced and Professional.

The Advanced package pre-selects the most common features customers require for daily operations, while the Professional package is focused on AFS technology, being guidance-ready and with the AFSPro 700 display.

No longer are they an after market afterthought, but are now being considered as a basic feature of tractors in the sub 250hp bracket. 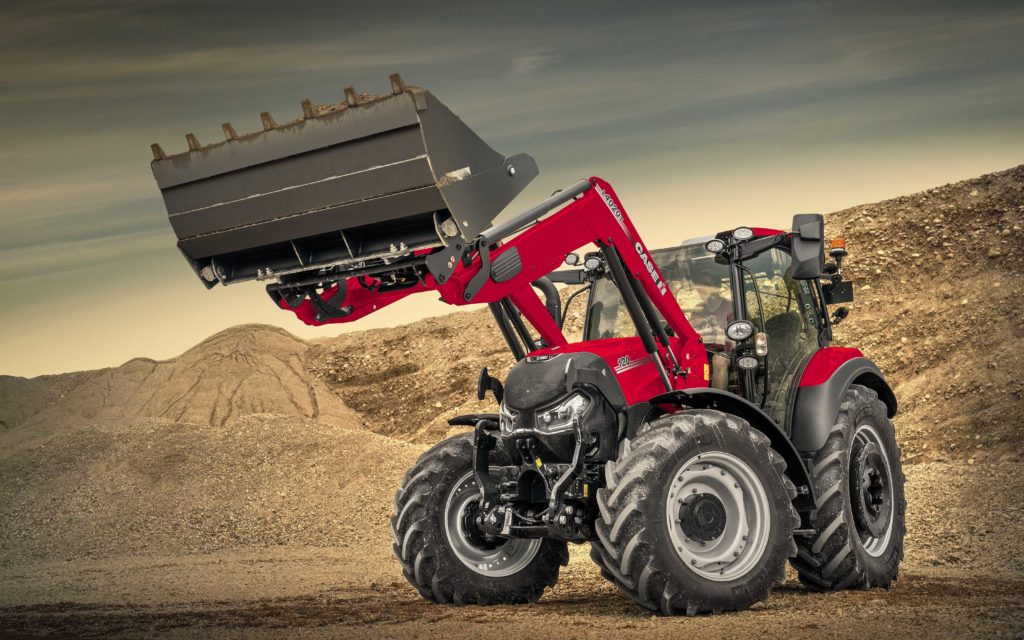 Case IH is no exception and in this major revamp of its loader offerings the company has gone full out to ensure that the tractor can easily adopt the role of materials handler, thus narrowing the gap between tractors and dedicated machines.

Tractor and loader as one​

As part of this new approach, all tractors up to the Puma 240 can be ordered from the factory ‘loader ready’.

When this option is selected the tractor will come fitted with a common bracket and the MACH System hydraulic/electrical service quick-coupler. Control of the loader and third and fourth hydraulic service functions are via the tractor hydraulic valves and joysticks.

In addition, bonnet protection guards and an integrated cross bar are attached. The loader itself is then fitted by the dealer before despatch to the farmer.

Just as tractors come with different specification and performance levels, so do the Case IH front loaders.

There are three versions available, these are designated the A, U, and T ranges. 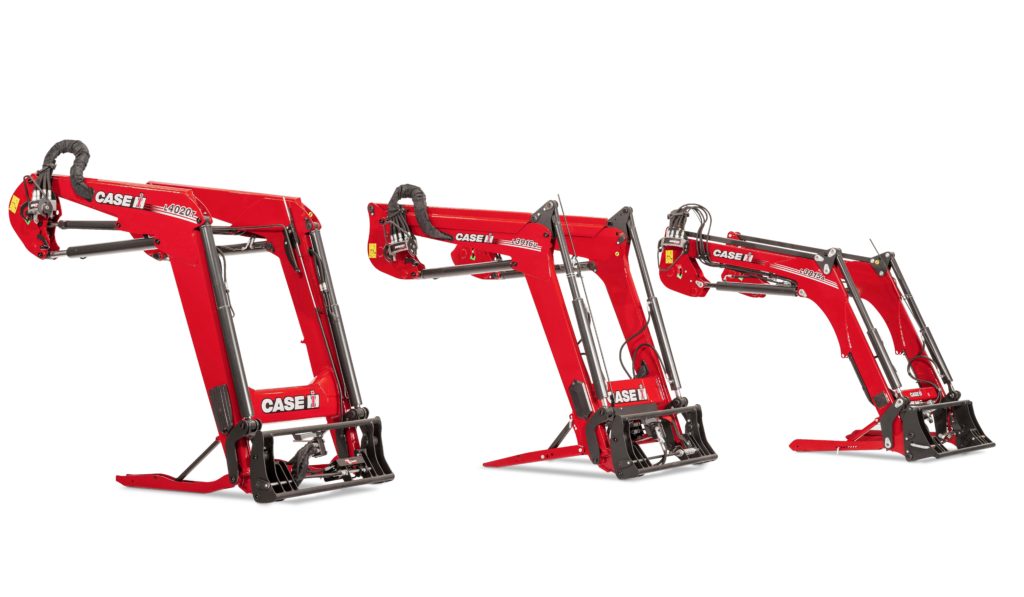 At the base of the line is the three-model A range, an entry-level, lighter front loader for general handling work.

There are three models incorporating mechanical self-levelling and they match the Farmall 55C to Maxxum 140 tractors.

At the top come the ten loaders in the T series. These have maximum lift heights up to 4.70m. Lift capacities range from 1,390kg on the smallest model to 2,720kg on the largest.

Features common to all​

All feature a design that protects the hydraulic hoses by routing them inside the loader frame and cross-bar.

Hydraulic self-levelling comes as standard and incorporates integral compensation cylinders connected to the headstock-dumping hydraulic cylinders. This is said to result in improved cycle times.

There is also an auto unload system which synchronises grab-opening and bucket-dumping functions. 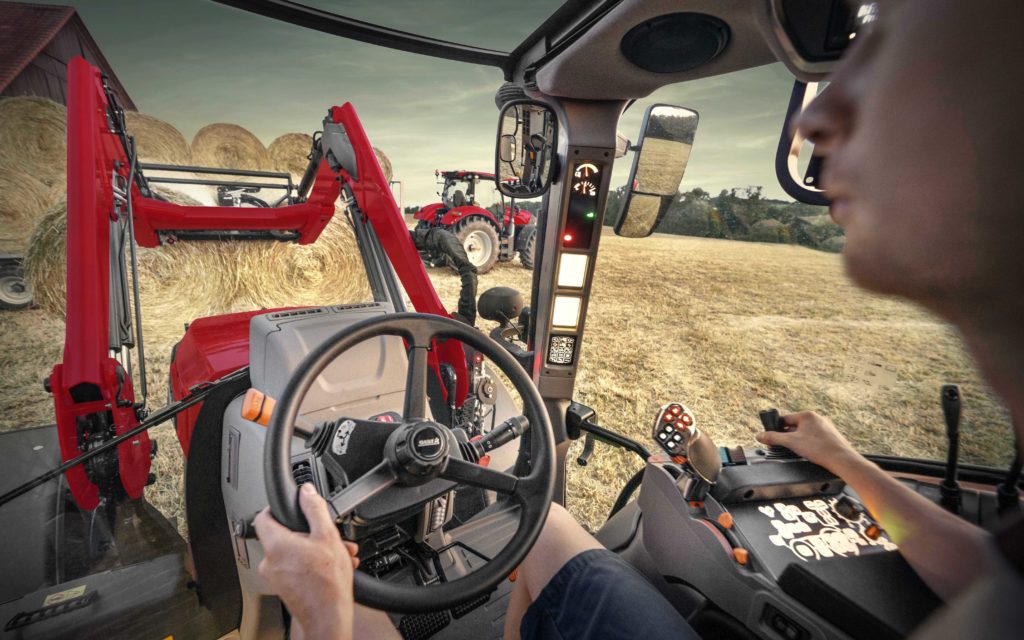 In between the A and T series come the U models. As on the T series, the hydraulic lines on the 14 models of this range are routed inside the loader frame to protect them from damage.

Fitted to all three ranges is a shock absorbing system which minimises transfer of load shocks through to the tractor and operator. Mounting the loader to the tractor is said to be eased eased by the Fitlock 2+ coupling, which automates the process.