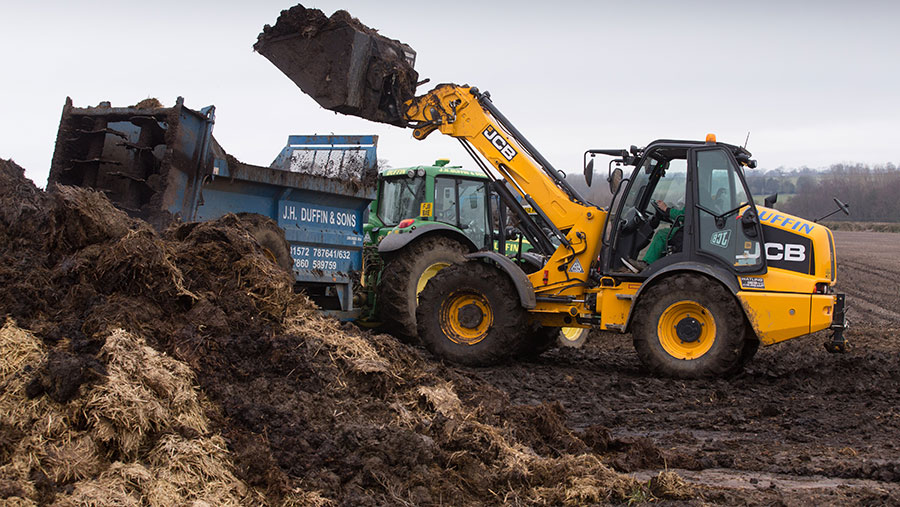 © Tim Scrivener
The Environment Agency (EA) is showing no signs of softening its approach towards spreading farmyard manure and slurry in the autumn, despite pressure from MPs on the Environment, Food and Rural Affairs (Efra) committee and regular meetings with industry via a working group.
The restrictions came into play this year, following a stricter interpretation of the 2018 Farming Rules for Water by the EA, which insisted spreading of organic matter should only be allowed to meet the immediate nutrient needs of the crop.
See also: What do the Farming Rules for Water mean?
This effectively ruled out the spreading of organic manures from 1 September on grassland and cereals, limiting any application to winter oilseed rape, which would have an immediate need.
Following widespread industry complaints and lobbying, the EA did introduce a temporary exemption – Regulatory Position Statement 252 – which has allowed some spreading this autumn, but with tight conditions attached.
For example, farmers had to pre-notify the EA of any spreading, and could only do so if there were no alternative ways of disposing of the organic matter.

The negative impact of these restrictions were set out in a letter from chair of the Efra committee of MPs, Neil Parish, to EA chief executive Sir James Bevan in late October.
In the letter, he said spreading organic matter in the autumn “is a well-established part of good soil management”. It enabled nutrients to be available to the crop in the spring, while incorporating it into the soil, before a crop was planted, would reduce air pollution.

Preventing farmers from using organic fertiliser in the autumn would also make them more likely to use bagged fertiliser, which “costs more, has a higher carbon footprint and increases ammonia nitrate levels – which run counter to government net-zero and clean air ambitions.

Visit our Know How centre for practical farming advice
The Efra committee therefore asked the EA to revisit its current approach to the Farming Rules for Water to ensure that it does not prevent the responsible application of organic manure on soil in the autumn for a crop in the spring”.
But in his reply, Sir James makes it clear that the EA is not for turning. He explains that farmers may still spread organic matter (such as green compost) in the autumn – so long as it “does not contain nutrients that are not needed”.
And he makes clear that RPS 252 was “specifically designed to help farmers this autumn”, providing no hint that the provisions will be extended to next year.

To try to find some compromise, a working group was set up by Defra in September, including farmer representatives and agronomists.
But reports from members of that group suggest progress has been almost non-existent, with Defra preoccupied with avoiding diffuse pollution.
“The NFU and wider industry is fully committed to delivering the outcomes desired for water quality and the wider environment,” said NFU deputy president Stuart Roberts.
“However, our concern is that the Environment Agency’s rigid interpretation of this legislation will have a hugely damaging impact on the farming sector.
“The current approach presents significant policy conflicts with government ambitions on improving soil health, lowering emissions and farming’s carbon footprint.”
“We firmly believe that working with farming and other organisations to look at how we improve the efficient use of organic manures is the best way to avoid these unintended consequences and importantly, deliver for water quality.
“The NFU will continue discussions with the Environment Agency, government and industry stakeholders to develop these solutions as part of a collaborative and holistic approach.”

------------
So come March after another wet spring farmers will all be plastering the countryside with dung & slurry to get rid if it, this has to be the most insane set of rules yet, where is the NFU's backbone in refusing to go along with this crass stupidity!!

It’s depressing. They don’t want us to farm
M

How many people who spread in the autumn used the RPS and informed the EA? I’ve been told by several sources that not many did. Virtually all people who spread that I have talked to didn’t. I don’t agree with what they’re doing, but they’ve pretty much heard radio silence, and suppose that everyone has managed without spreading as nobody told them that they were.

No need to worry Brian , the world will be short of food in 18 months
B

What they don't understand (or want to) is that the weather alters or moves the goalposts ,A couple or so years back a wet August would have theoretically been too wet, but this Autumn has been very different!!I personally do not understand all this rewilding nonsense ,then lets import food from anywhere as long as its cheap and to hell with traceability??never mind the extra emissions !! To me it defies logic ?? perhaps i'm not very astute ??

Do I infer correctly that it is fine to spread up to 31st August then?

David. said:
Do I infer correctly that it is fine to spread up to 31st August then?
Click to expand...

Should be about conditions at the time, not calendar date .
plenty could be spread now as it’s as dry as the spring and the grass is still growing
B

silverfox said:
Should be about conditions at the time, not calendar date .
plenty could be spread now as it’s as dry as the spring and the grass is still growing
Click to expand...

Exactly what i said or meant to in my post above

The strokers need to get their own house in order first ...
B

Stop taking sewage sludge.
See what they come up with when they’re bunged up !

David. said:
Do I infer correctly that it is fine to spread up to 31st August then?
Click to expand...

I have said all along that there should be a nationwide sludge boycott in response to this madness. Won't happen, somebody will break ranks and take it for 0.1p per ton bribe.
W

It does make you wonder if stupid rules only apply to stupid people.

It's the EA. Since when have common sense and the EA had anything in common?

Autumn application of manures makes agronomic sense and these days the winters are so mild the crops and soils DO benefit from autumn applications of nutrients in this form.

If the EA don't drop this nonsense they will see the annual muckspreading event taking place in the first dry day in March as soon as people can travel. They are goons of the highest order.

Sid said:
You can't just refuse to go along with a government agency's rules no matter how much you disagree with it

That's like saying don't worry about the new rules on trailers and licences JFDI.

There is alot going on on various fronts right across various sectors. Evidence and science is key to getting the right decision for the industry.

No one is sitting back and not doing anything!
Click to expand...

Bullsh!t, you have dry periods like we are having now when now you are not allowed to spread where as in normal times a few farmers might spread a bit in safer fields & if there was rain of any amount any pollution that possibly occurred would be minimal , now by restricting farmers to a certain date in the spring regardless of past or unknown future weather conditions farmers all over the country will be desperately spreading, any serious rain in the following weeks will likely cause terrible pollution.
It's a damm stupid idea from idiots that know no better!

daveydiesel1 said:
In ni we have been banned from spreadin dung and slurry in winter months for years now is this only comin in now on the mainland
Click to expand...

what months are you banned ?
H

daveydiesel1 said:
In ni we have been banned from spreadin dung and slurry in winter months for years now is this only comin in now on the mainland
Click to expand...