Written by Stella Meehan from Agriland

The jury panel from across Europe singled out the T6 Methane Powered production tractor from shortlisted tractors in three main categories.

The T6 Methane Powered Concept won the same title in 2019 at Agritechnica, and at that stage was a concept at testing phase.

New Holland brand president Carlo Lambro, commented: “We are very proud of receiving this title ‘Sustainable Tractor of the Year Award’ again, but for our production tractor.

“This is the culmination of New Holland’s pioneering work on the use of alternative fuels through our ‘Clean Energy Leader’ strategy, and it is a significant step forward on the path to decarbonising agriculture.
Click to expand...

“This award is a well-deserved recognition of the hard work and dedication of all those involved in the development of the T6 Methane Power tractor series, from our engineering teams to the whole Basildon plant team.”

The T6 Methane Power is on display at the EIMA exhibition in Italy this week, to highlight the advantages of the tractor and how it can benefit a farmer’s operation and profitability. 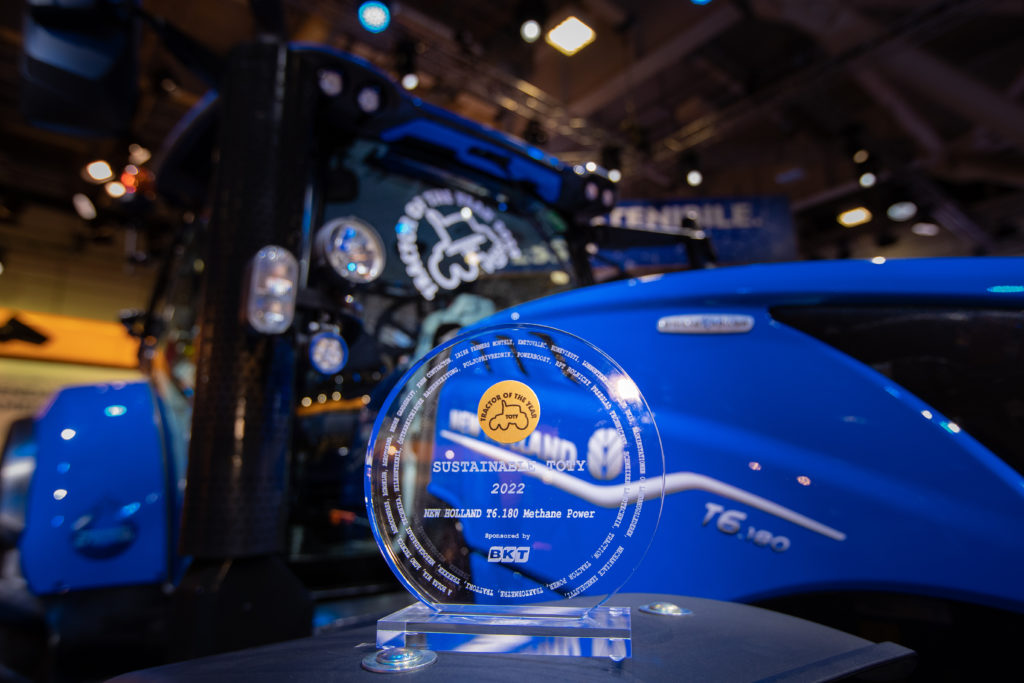 Head of tractor product management, Oscar Baroncelli, stated: “The T6 Methane Power tractor we [are] presenting here at EIMA is our production unit, and this technology is available to our customers now.

“With the economic and practical advantages it brings, further enhanced when using biomethane, we expect a lot of interest from biogas plant operators and suppliers, and also farmers with access to the gas network.
Click to expand...

“Municipalities are also showing a lot of interest in adding this tractor to their fleets of compressed natural gas vehicles to further reduce their emissions footprint.”

In 2006, New Holland launched its ‘Clean Energy Leader’ strategy, followed by the unveiling in 2013 of the brand’s first methane-fuelled T6 series-based tractor prototype.

Gas injectors and spark plugs replace the diesel injector, with the gas injected into each cylinder for constant, clean, maximised combustion, according to the company.

Compared to the limits allowed under EU Stage V emissions rules, carbon monoxide emissions from the methane-powered T6.180 are reportedly 80% lower, while the level of non-methane hydrocarbons is reduced by 90%.

Particulate matter is down by 98%, nitrous oxide by 62%, and CO2 by 11%. However, the T6.180 Methane Power has the same 175hp maximum power output with boost as its conventional cousin, and produces maximum torque of 740Nm.

Running costs are up to 30% lower, while less vibration.

In other areas, the tractor resembles its diesel-powered equivalent, but the key change is the replacement of the fuel tanks with a combination of ten tanks arranged around the centre of the chassis.

The front-mounted ‘range extender’ unit can be replaced with a front linkage and PTO if required or removed for loader work.

With 453L of gas capacity, equating to 79kg, the tractor holds sufficient fuel for around eight hours of road haulage or PTO work, rising to 14 hours for operating something like a cattle feeder.

Mark Howell, global product manager, alternative fuel, at New Holland said: “It takes no longer than refuelling a conventional tractor’s diesel tank, and is a cleaner process with no chance of spillages.

“When using methane produced from a biogas plant with a mixture of waste and crops, customers can achieve carbon neutral, but when the methane is collected directly from a slurry lagoon, not only are the methane emissions being stopped from escaping into the atmosphere, it is being used instead of a fossil fuel, bringing a double benefit in CO2 savings.
Click to expand...

“Farms can become not just food producers, but fuel sources too, and methane-fuelled tractors are the enablers for this circular process.”