New software that uses a drone to image crops has been developed to help farmers walk crops more quickly and accurately. Skippy Scout has been developed by farming technology specialist Drone Ag to monitor a variety of broad acre crops. The latest developments in the software’s version 2.5 enables users to import field maps and track the crop from emergence to harvest. The data from each flight is recorded and reports generated that help to evaluate the crop throughout the growing season and collect data to compare growing trends and yields year on year.

Oilseed Rape (OSR) yields are affected by a variety of pests and environmental pressures, from cabbage stem flea beetle to rare late frosts. “Monitoring OSR more closely and regularly without the same time trappings of conventional crop walking can help to make vital decisions,” says Drone Ag founder Jack Wrangham. “Skippy Scout automates drone flight to view a field up to ten times faster than on foot,” he adds. By decreasing the amount of time needed to walk a field, and increasing the amount of data collected, Mr Wrangham believes that any farmer can see incremental yield improvements in crops like OSR.

Unlike some technology developers Mr Wrangham is a farmer. His brother Hugh works with his father John at the family’s 600-hectare arable farm in Northumberland. “At Harehope Farm, we have been using Skippy to monitor 15 fields over the season, each field had an average of nine key scout points, and each field was visited five times. To do this on foot would have taken 21 hours, with Skippy it took five and half,” he says. The scouting point locations are decided based on a combination of previous problem areas, satellite imagery showing areas of different biomass, and some additional points to balance data across a field.

Following variable rate sowing at Harehope the Wrangham’s use Skippy Scout to provide accurate post emergence plant counts. “This helps in any areas that have been missed and measures how effective variable rate drilling has been,” he says. Following early emergence, flea beetle is a concern for OSR. “It is crucial to find and identify flea beetle early, and with Skippy we can monitor fields faster and more regularly. Holes in the leaves are counted by the app and reports show the extent of any damage sustained. Areas with higher levels of damage are flagged to decide if spraying is necessary,” he adds. The effectiveness of subsequent crop treatments is also measured by further drone flights to image the OSR and track any further signs of damage increasing or decreasing.

Data collected has been used to make year on year adjustments to OSR. As the crop develops, an accurate green area index (GAI) can be taken at regular intervals to understand crop vigour, nutrition requirements, disease, and pest levels. “Using crop cover percentages and GAI we are able to adjust and learn from previous treatments to find and tackle problems earlier,” says Mr Wrangham. The damaged areas can be monitored throughout the crop cycle to minimise any losses in the current year and better understand what factors are making a positive or negative difference. “It’s all about having hard facts, statistical data, GAI and plant counts at the press of a button. It would not be realistic to walk the fields as many times as is possible with a drone, and the reports produced can be saved to help make decisions for future crops,” he adds. 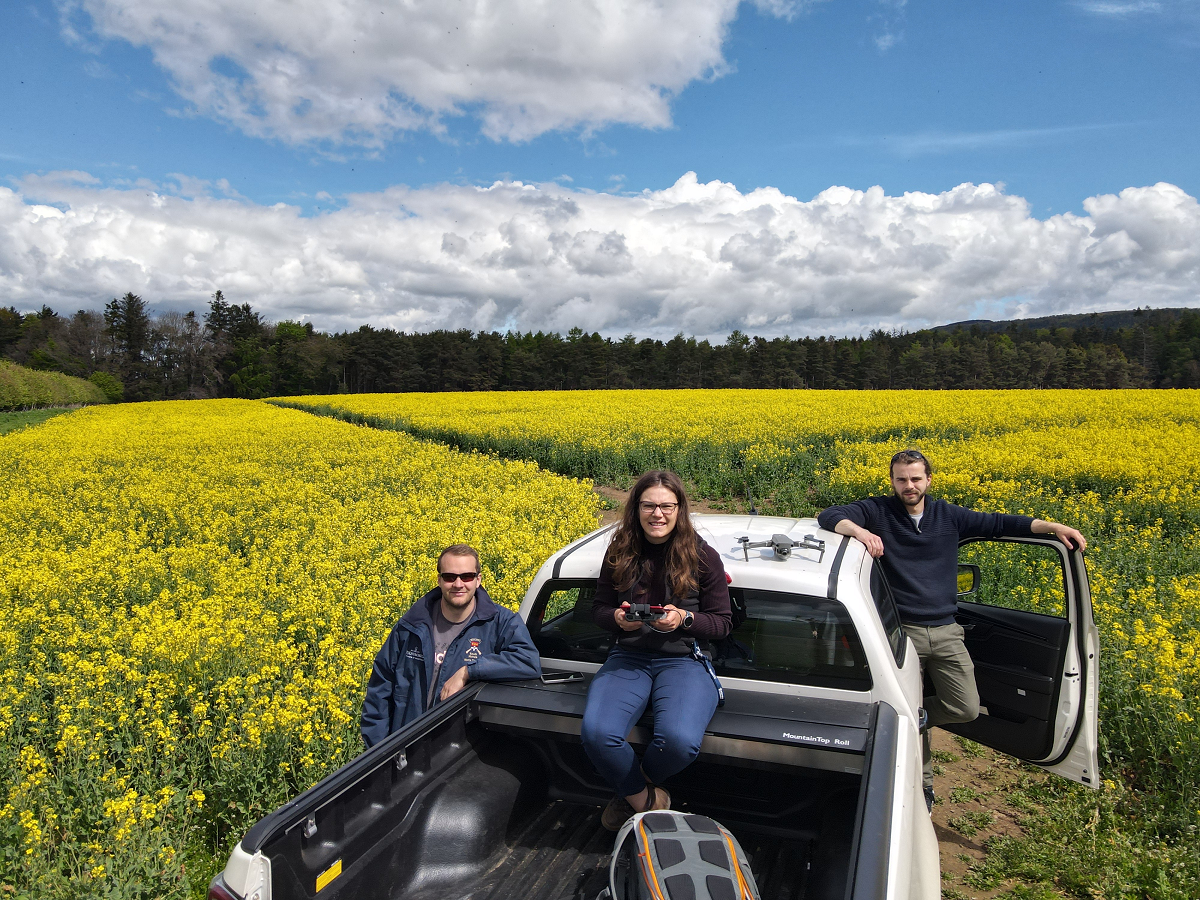 Using the app has reduced the frequency and quantity of inputs needed at Harehope. “We also use the GAI readings for variable rate Nitrogen (N) applications. Satellite data is a useful tool, but it is often not enough because the weather prevents being able to see the crop regularly enough. We have also found that it provides inconsistent data because it does not differentiate weeds,” he says. The GAI readings provided by Skippy Scout are crop-only. This is because the drone flies close to the ground making its view of the crop more accurate. “When combined with satellite data, simple zoning is effective in reducing the amount of N needed to create a more even crop,” he says.

Despite the option to variably apply N to OSR, the Wrangham’s chose to apply at a flat rate per field this season because Skippy Scout was able to show that GAI was quite even across the crop. 234 kilograms per hectare was applied over two applications based on the average GAI recorded by scouts made with the drone on the day the application was made. “Using the reports from Skippy has allowed us to make better use of our inputs. We are more efficient and better informed to make applications,” explains Mr Wrangham.

This helped to develop one of the app’s new functions which helps users judge how to balance the use of inputs. “Crop evenness is a percentage value of crop variability. It identifies whether variable rate applications are needed and tracks how effective the decisions are through a season. One hundred percent is a completely even crop, and lower percentages reflect the impact of treatments and inputs on the crop,” he says.

The Wranghams have targeted a GAI of 3.5 at flowering onset as a key performance indicator for OSR. Regular drone flights that capture GAI show how the crop is developing through the growing season and enable adjustments to be made. “As the crop begins to flower, we are able to see how areas that are not meeting the target 3.5 GAI are going to affect the overall yield,” he says. This begins a process of careful monitoring to estimate yield in the run up to harvesting the crop. “Skippy has a flower fraction measurement that identifies the intensity of flowering. This, along with GAI measurements, helps to estimate yield and a later measurement of crop die-off helps to decide on desiccation and harvesting timing,” he says.

2020/21 has brought late frosts to OSR crops throughout the UK. “Skippy has highlighted that crops of highest early autumn vigour suffered, as they were well into stem extension when the cold weather hit in early spring. It is possible to establish this by using Skippy to count the pods on the stem of the plant,” says Mr Wrangham. This is also helping the farm to judge the timing and amount of fungicide. “Flowering has been prolonged in many crops this year. Skippy has been a good tool to identify fungicide timings for a second or third Sclerotinia flower spray in some places,” he adds.

Regular flights help the farm to gather data about flowering decline and crop die-off. “The reports generated from each flight provide an indication of green area duration and whether or not a late foliar N application would be worthwhile. When this is compared with other metrics through a season it is possible to estimate overall yield more accurately,” he says. This not only helps during a single growing season but is also creating a library of data that can help to predict how changes in the crop, or weather conditions, can improve future yields.

Tracking and logging the effect of the decisions made is the defining difference of using drone reports. Having a constant record of every flight and understanding the impact of choices based on that data is offering answers to common problems. “Often decisions can be made with relatively little data, but with Skippy it is possible to build up a database of specific points in each field and make incremental improvements with each crop,” says Mr Wrangham. This is applying a more scientific approach with an element of trial and error. “Skippy can help users develop techniques that produce healthier crops with higher yields more efficiently, by reducing costs and the use of chemicals,” he concludes. 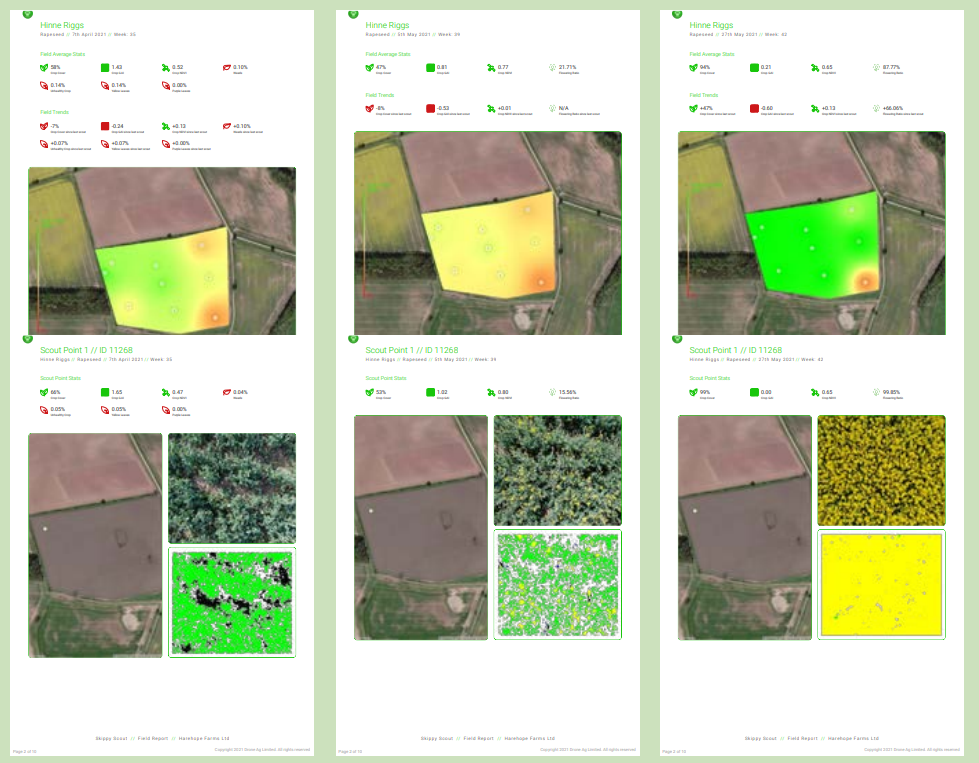