Pottinger announces the arrival of its new Jumbo

Pottinger has been keeping itself busy over the last year or so and recently presented some major updates to its product lines.

The big news is the arrival of the completely redesigned Jumbo forage wagon range that brings the machine quite a way forward since the last models were launched 10 years ago. 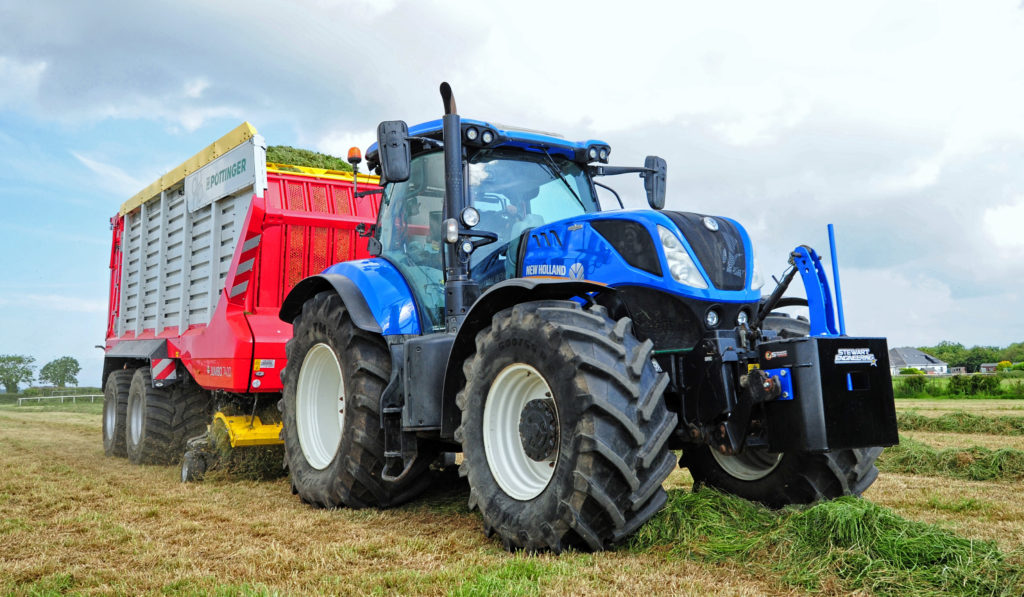 A dry, light crop can be densely packed by the new Jumbo

According to Diarmuid Claridge, general manager for Pottinger in Ireland, the delay was due to the company wanting to get it right.

This year the company has been field testing 30 pre-production machines, one of which has been in use in Co. Wexford.

The company claims that the departing machines were so popular with their customers, that to replace them would risk adversely affecting sales. Yet time marches on and farming doesn’t stand still, so the decision to upgrade was taken at least five years ago.

It has been a long gestation, yet it has been worth the wait, for Pottinger has produced a totally new machine.

There is a comprehensive list of changes both major and minor, although there are three main developments that stand out.


All three models are capable of being run by tractors up to 500hp. Most of the power is required by the chopping unit and a completely new drive system to the rotor has been created to cope with it.

The company notes that this level of performance is greater than any other on the market and equals the throughput capacity of smaller, self-propelled harvesters. 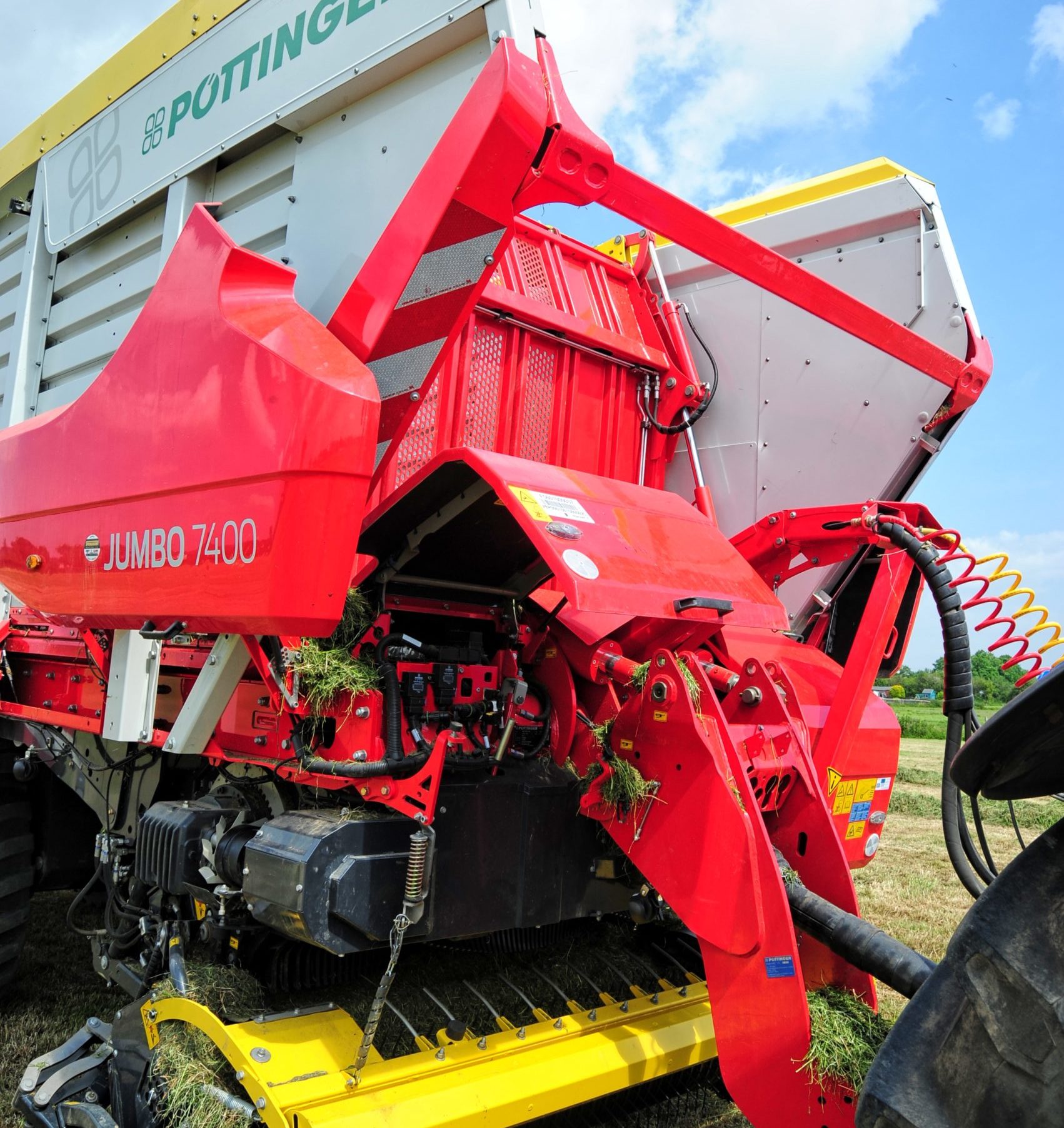 The fully encased belt drive runs above the reel

Power from the tractor is taken to a gearbox on the wagon via a double wide angle Power Take Off (PTO). From there, it is passed through a belt drive to a slip clutch and then to the rotor itself.

Reverting to belts might appear to be a backward step, but the company points out that such an arrangement irons out the shock loadings back to the tractor.

The effect is multiplied by the addition of a hydraulic tensioner with an accumulator attached.


Keeping the forage clean and free from soil and other containments was a major design criteria.

The seven-row controlled floating pick up is 2.3m in width and the tines are 6mm in diameter. 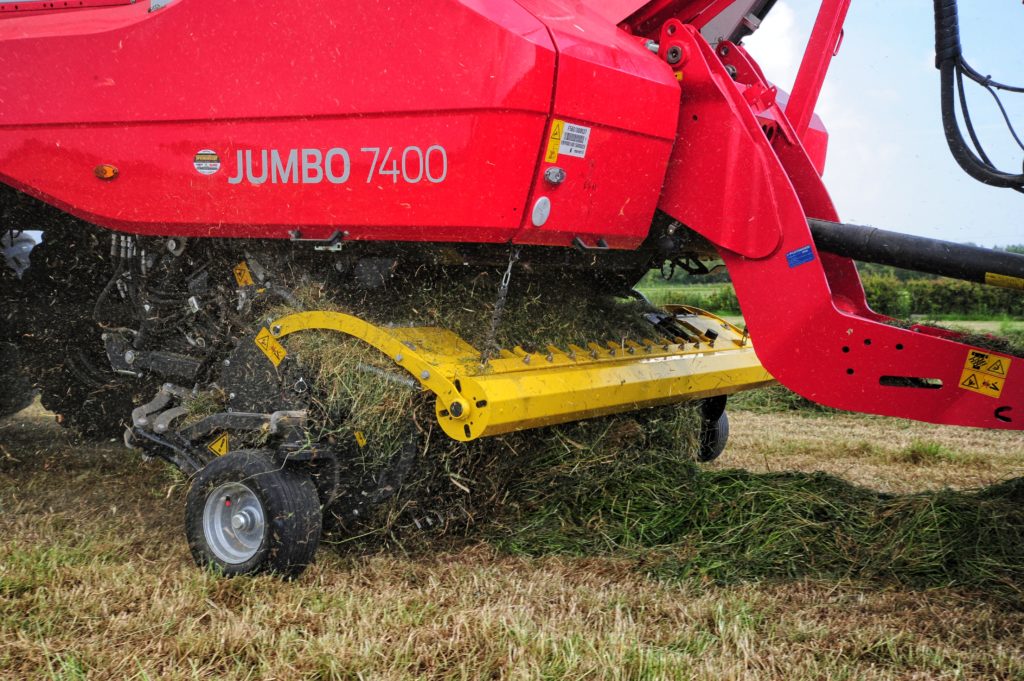 Reel speed can be adjusted to match ground speed

There are now 48 knives mounted on a 850-diameter rotor, an increase of 50mm over the older version. The resulting chop length is said to be 34mm.

The consistency of chop length is further enhanced by having an adjustable speed to the pick-up reel. This is powered solely by the tractor hydraulics and its revolutions per minute (RPM) can be adjusted to match the forward speed of the tractor.

By doing so, the grass is less likely to be turned in a fore-and-aft direction, ensuring that it gets chopped as it passes through the rotor. 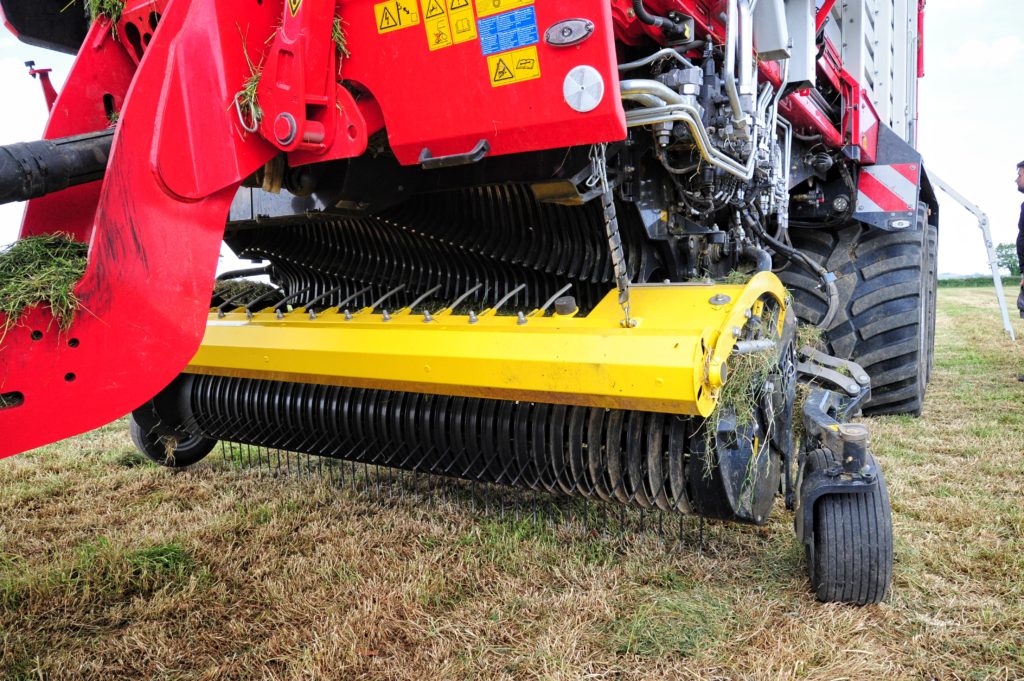 The reel is now mounted in such as way that it can swing through a vertical arc of 3.5° either way, enabling it to more closely follow ground contours.

A set of land rollers running immediately behind the tines reduces the collection of soil and other debris from the surface.

To facilitate the sharpening of the knives the whole unit can be dropped down and swung out from underneath the frame. Alternatively, there is the option of an automatic knife sharpening tool. 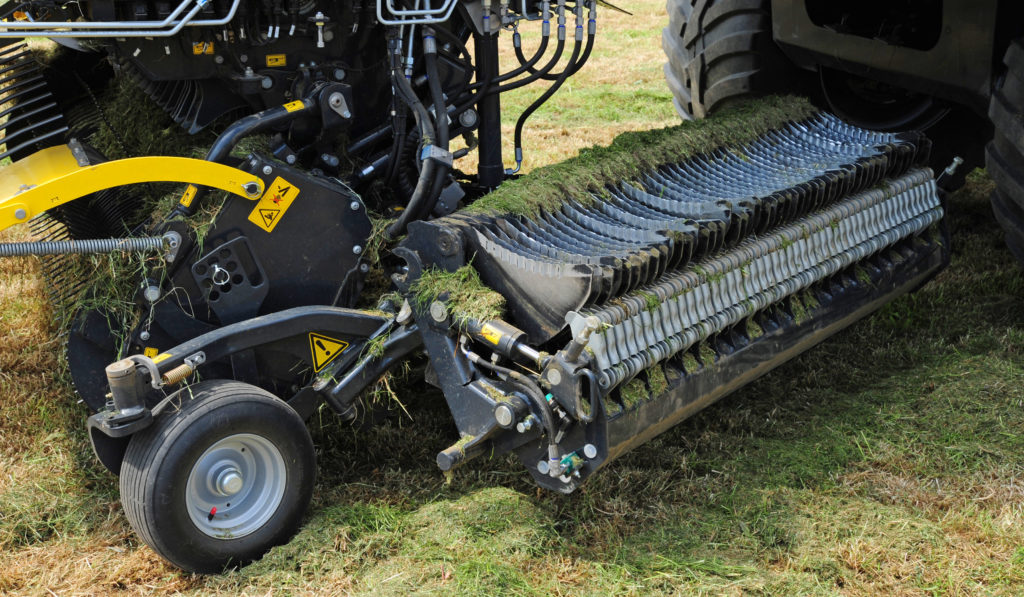 The knife bank can be easily swung out for maintenance

The company points out that significant fuel savings can be made through keeping the knives sharp.

The blades are made from Durastar tool-quality steel which offers a 20% longer service life; they are also easily reversed, dispensing with the need to carry a spare set.


As tractors have grown smarter, implements have, to a great extent, been left behind. That is now changing and the new Jumbos are able to apply some intelligence to the art of packing the trailer.

This new found brain power governs the function of the headboard that now comes as a two piece unit.

The main board can hinge backwards to help compress the grass as it enters the chamber. 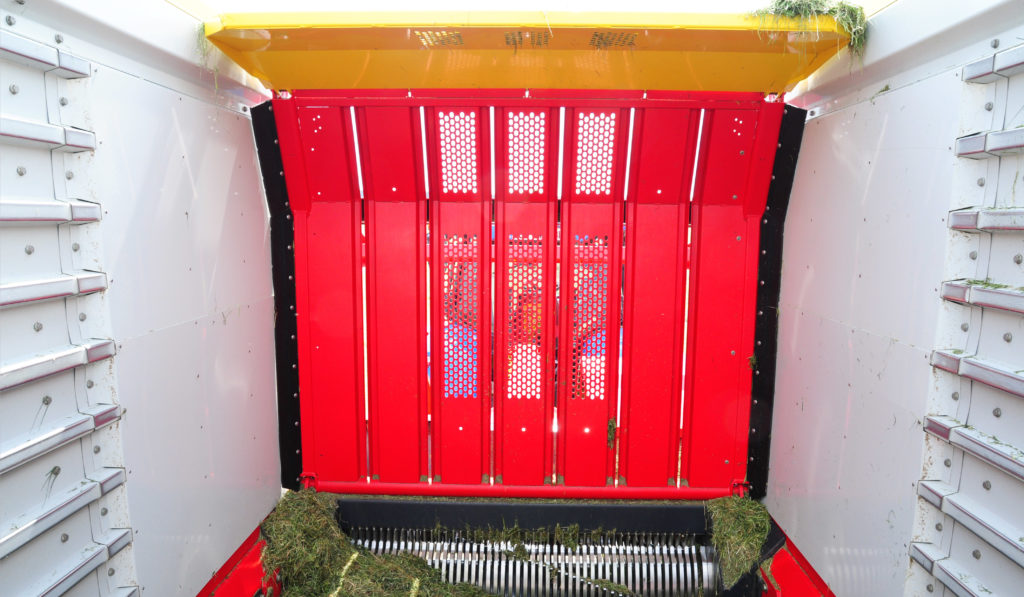 Attached to the top is an extra ‘flap’ that is also hinged and can be set at various angles. This restricts and directs the flow of grass, further compressing it if dry, or letting it flow more easily if wet.

Once the chamber is full, the front board will then automatically move forwards, allowing material into the area above the drawbar. By doing so it allows an extra 4.3m3 of space to be utilised, without adding to the length of the trailer.

Intelligent compaction, along with extra space has greatly increased the carrying capacity of the range, a major selling point according to the company.

More grass can be carried per trip, although the more dense the load the longer it takes to fill. It therefore becomes a question of balance between trip length and filling time, a micro management decision that has yet to be automated by Pottinger.

Attention to the details


At the front of the load chamber the floor has been dropped by 250mm to allow easier loading up into the main compartment. Unloading is said to take less than a minute. 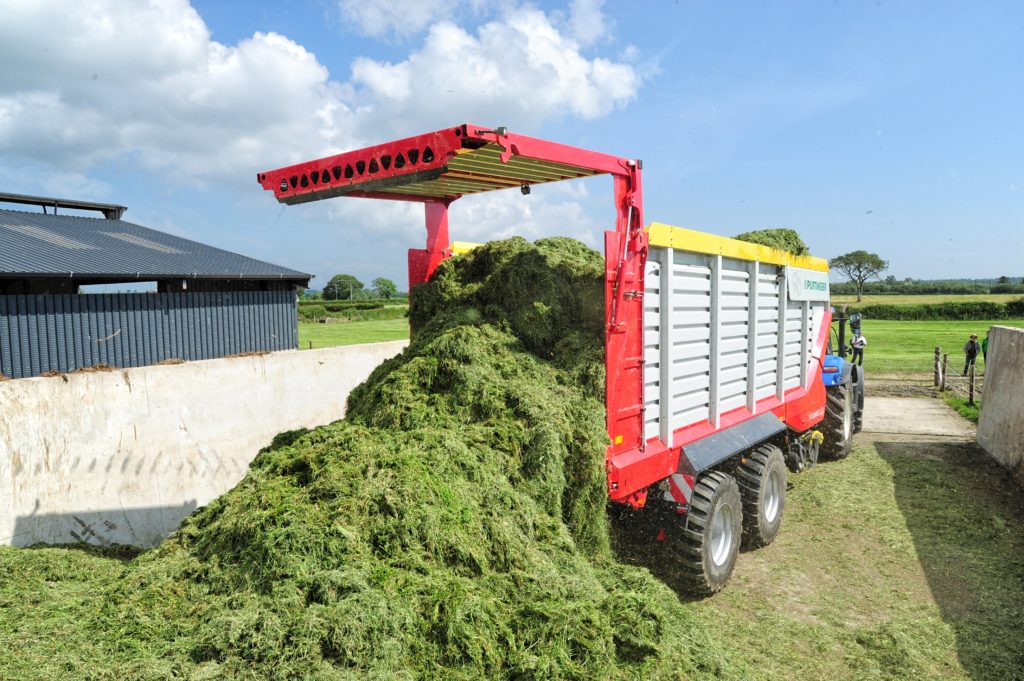 Unloading takes no more than a minute

The floor chains themselves have been redesigned and are now ‘flat ended’ to reduce wear. Each chain has a breaking strain of 13t and are double bolted to the slats.

On the pick-up reel, the jockey wheels can be folded in to keep the overall width down and the whole unit can be easily removed should the trailer be needed for transport only.

Numerous LED lights are mounted around the machine to help with nighttime operation while HDR CCTV is available to check on the loading and reversing.


Depending on model size there is a wide range of options for the trailing gear.

Twin or triple axles can be specified along with two steering activation modes. Two tyre types can also be specified depending on preferred tread pattern. 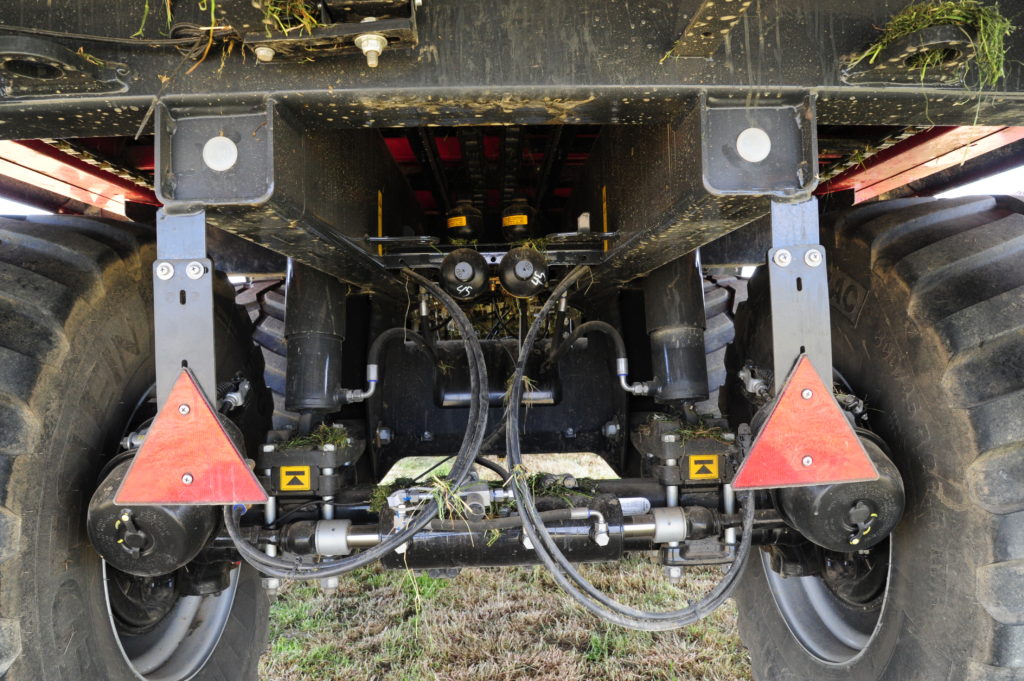 Suspension is hydro-pneumatic, with a load compensation system that aids stability and climbing ability in the clamp or on other inclines.

Increased driver comfort is achieved through using a separate hydraulic accumulator for when the trailer is empty. 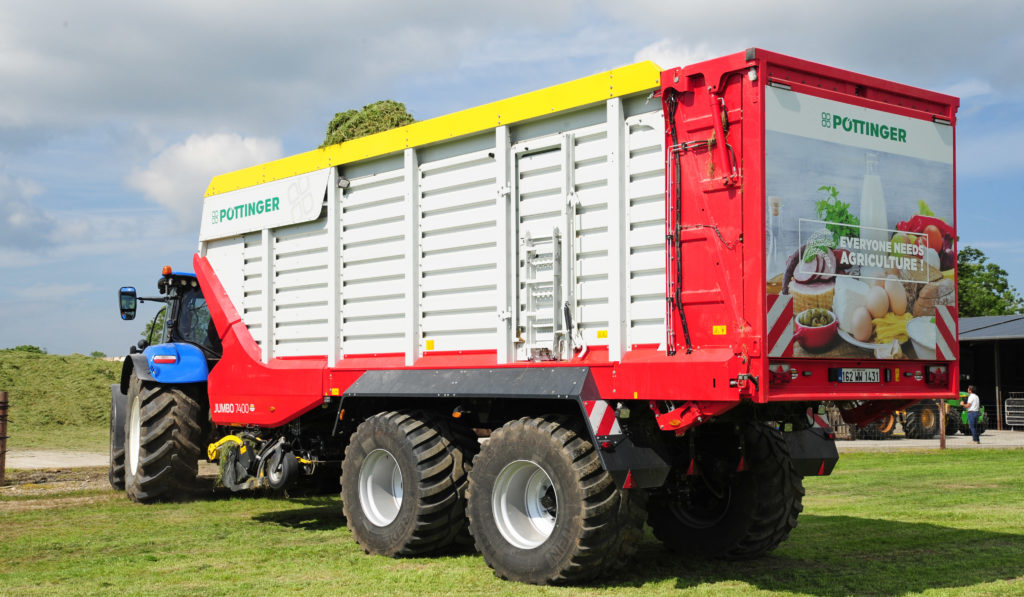 The Jumbo 7400 is the smallest of the trio

Capacities for the new jumbo range, without the optional greedy boards:


The new Jumbo range will be available for the 2022 season.


The post Pottinger announces the arrival of its new Jumbo appeared first on Agriland.co.uk.