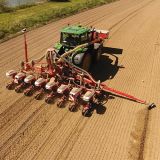 From the end of April through into May, the region’s maize drills will be at their busiest as farmers and contractors seek to make use of the best conditions to establish a key crop. We speak to three Shropshire contractors who have invested in the best technology to deliver results for their customers.

Martin Evans, John Roberts & Sons and Steven Edwards are all experienced maize contractors. They all take pride in delivering the best job for their customers, which means being able to deliver consistent results in varying conditions, and in timely fashion. All have opted for the Kuhn Maxima seeder for maize drilling, buying through Rea Valley Tractors (RVT) and benefitting from both company’s expertise in precision technology.

Kuhn first entered the precision drill market though an acquisition in 1997. The company took time to build strength and improved technical capabilities into its machines, with Kuhn UK launching the first Maxima precision seeder at the Smithfield Show in 2002.
Maxima 2 entered the UK in 2009 and with it came a new beam design allowing easier row spacing adjustment and the introduction of the first telescopic frame models. There were also significant improvements to the seed distribution system, ensuring regular vacuum across the full width of the machine, and better fertiliser carrying capacity and application rate range. Maxima 2 also featured improvements to the rear press wheels, giving increased ground pressure and performance across a broader range of working conditions.


Maxima 3, now entering its third season, comprises 12 models in a choice of configurations including trailed, foldable and telescopic with adjustable spacing. There are versions offering between 6 and 12 row formats, all with the capability of drilling crops with row spacings from 37.5 to 80cm.


An improved seed selection and ejection system is a key feature of the latest models, enabling accurate seed placement at high working speeds. Accuracy is also enhanced by a new seeding unit parallelogram capable of producing up to 180kg of downward pressure which enhances seeding accuracy by ensuring consistent depth control. The parallelogram has been reinforced in key areas, including at critical hinges and linkages, for added stability, robustness and longevity.


The Maxima 3 range also includes the option of an electrically driven seed metering system which allows application rates to be adjusted manually on the move or in accordance with pre-prescribed seeding maps. The electrically operated system also enables GPS or manually controlled row shut-off.


A wide choice of optional equipment is also available, including angle-adjustable rear closing wheels which provide a furrow closing pressure of up to 45kg. Fertiliser hoppers, front, rear and intermediate press wheels, clod cleaners and trash wipers are also available to allow machines to be adapted to specific requirements.
Reliability


John Roberts & Sons bought their 8-row Maxima 3 RTe shortly after the new model became available. As Simon Roberts explains, it was the electric drive and section control capability that were amongst the priorities for the business when upgrading their drill.
“We wanted the technology that would deliver the drilling performance that modern farmers expect and also the confidence that the machine is going to be reliable,” he says. “Over two seasons, our experience is that the machine goes out in the morning and we hear nothing – so the reliability is certainly there – and it’s also allowed us to increase the forward speed for drilling, without any detriment to seed spacing and drilling depth.”


George Randall does most of the 2,500 – 3,000 acres of maize drilling carried out each year by John Robert & Sons. As a highly experienced operator, he was quick to realise the full capabilities of the drill.
“I did some digging and scratching when we first had the drill,” he says “to check that the seed placement and drilling depths were maintained even at the higher forward speeds, and that the section control was as accurate as it should be. We have done some tweaking of the sensors, to fine-tune the auto shut-off on straight headlands, but on staggered headlands it’s always been perfect. Sowing depth is also remarkably consistent, right across the machine, and the ability to adjust the ground penetration pressure according to conditions is a significant benefit.”
With an 1,800 litre front tank for the fertiliser, capable of carrying two big bags, George sees a big operational time saving, adding to the increased efficiency gained from forward speeds up to 12km/hr.


Drilling around 3,000 acres of maize in a typical season, contractor Martin Evans encounters a wide variety of conditions. Seeking a drill with the necessary adaptability alongside the capability to perform with greater precision, they upgraded to an electric drive Maxima 3 RXe two years ago. Their 8-row model is hydraulically folding and is usually run with the Kuhn TF front hopper for fertiliser.


“With the fertiliser hopper on the front we are spreading the weight of the unit evenly but do still have the option of taking the drill out on its own,” says Josh Evans. “We’ve found that the fertiliser distribution system is perfectly capable of accurately applying at rates as low as 3kg/ha and therefore can use it for micro-granules as well as conventional compounds.”


Whilst accuracy with fertiliser placement is important, the real game-changer for Josh is the precision with which seed is drilled. He also favours the vacuum distribution system over the blower used on other drills.


“The consistency of seed spacing, and drilling depth, is significantly better than we ever achieved with our previous drill,” he adds. “We do still have the old drill, but our customers now only want the Maxima.
“The section control is another major benefit, not only saving seed but also eliminating the problems caused for the harvester by overlapping rows. Row-finding technology that we have on our forager works much better where fields have been drilled with section control.”


For farmer and contractor Stevie Edwards, a 4-row Maxima 2M drill mounted on a 3-metre power harrow offers simplicity and efficiency. With a sub-soiler and a front mounted power harrow added to the combination, he has a unit that can drill directly behind the plough or operate in minimum tillage situations.


“We can often go in conditions when others are parked up,” he says, “or in drier conditions this system is far better for moisture retention. We have the scissor lift system that allows the drill to be in or out of work, so we can power harrow the more difficult areas of fields more, if necessary, to achieve consistent conditions for drilling.


“It’s a flexible system and is simple enough for any drivers to operate it. We can also swap the maize drill with a six-row beet drill onto this combination when needed.”


The unit is usually run on a 400hp tractor with RTK autosteer, so more than enough power for any job, but this combination suits his regular driver. Operating at a steady 8km/hr suits the conventional metering system and allows accurate and consistent seed placement, whatever the conditions.

You can read this update from Kuhn Farm Machinery on TFF's AGVendor...
Click to expand...