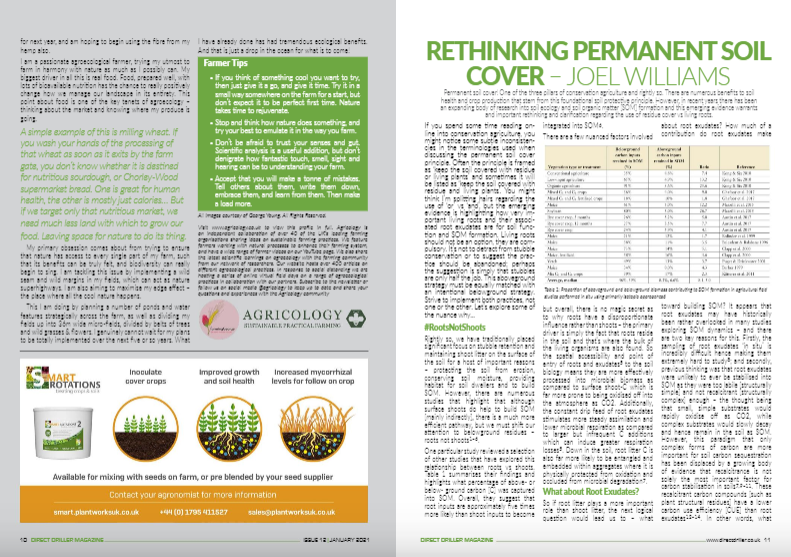 Permanent soil cover! One of the three pillars of conservation agriculture and rightly so. There are numerous benefits to soil health and crop production that stem from this foundational soil protective principle. However, in recent years there has been an expanding body of research into soil ecology and soil organic matter [SOM] formation and this emerging evidence warrants and important rethinking and clarification regarding the use of residue cover vs living roots.

If you spend some time reading online into conservation agriculture, you might notice some subtle inconsistencies in the terminologies used when discussing the permanent soil cover principle. Often the principle is framed as ‘keep the soil covered with residue or living plants’ and sometimes it will be listed as ‘keep the soil covered with residue and living plants’. You might think I’m splitting hairs regarding the use of ‘or’ vs ‘and’, but the emerging evidence is highlighting how very important living roots and their associated root exudates are for soil function and SOM formation.

Living roots should not be an option, they are compulsory. It’s not to detract from stubble conservation or to suggest the practice should be abandoned; perhaps the suggestion is simply that stubbles are only half the job. This aboveground strategy must be equally matched with an intentional belowground strategy. Strive to implement both practices, not one or the other. Let’s explore some of the nuance why...

Rightly so, we have traditionally placed significant focus on stubble retention and maintaining shoot litter on the surface of the soil for a host of important reasons – protecting the soil from erosion, conserving soil moisture, providing habitat for soil dwellers and to build SOM. However, there are numerous studies that highlight that although surface shoots do help to build SOM [mainly indirectly], there is a much more efficient pathway, but we must shift our attention to belowground residues – roots not shoots1–6. One particular study reviewed a selection of other studies that have explored this relationship between roots vs shoots. 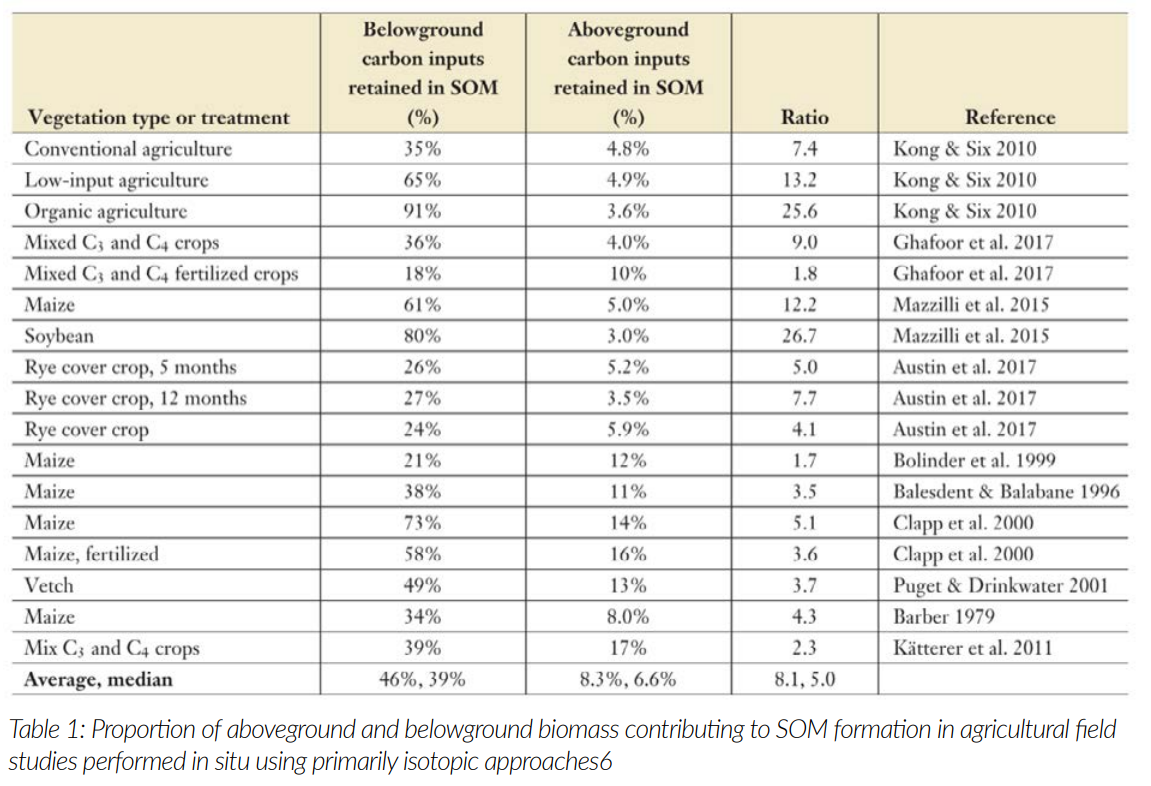 Table 1 summarises their findings and highlights what percentage of above- or below- ground carbon [C] was captured into SOM. Overall, they suggest that root inputs are approximately five times more likely than shoot inputs to become integrated into SOM6. There are a few nuanced factors involved but overall, there is no magic secret as to why roots have a disproportionate influence rather than shoots – the primary driver is simply the fact that roots reside in the soil and that’s where the bulk of the living organisms are also found. So the spatial accessibility and point of entry of roots and exudates5 to the soil biology means they are more effectively processed into microbial biomass as compared to surface shoot-C which is far more prone to being oxidised off into the atmosphere as CO2.

Additionally, the constant drip feed of root exudates stimulates more steady assimilation and lower microbial respiration as compared to larger but infrequent C additions which can induce greater respiration losses5. Down in the soil, root litter C is also far more likely to be entangled and embedded within aggregates where it is physically protected from oxidation and occluded from microbial degradation7.

What about Root Exudates?

So if root litter plays a more important role than shoot litter, the next logical question would lead us to – what about root exudates? How much of a contribution do root exudates make toward building SOM? It appears that root exudates may have historically been rather overlooked in many studies exploring SOM dynamics – and there are two key reasons for this. Firstly, the sampling of root exudates ‘in situ’ is incredibly difficult hence making them extremely hard to study8; and secondly, previous thinking was that root exudates were unlikely to ever be stabilised into SOM as they were too labile [structurally simple] and not recalcitrant [structurally complex] enough – the thought being that small, simple substrates would rapidly oxidise off as CO2, while complex substrates would slowly decay and hence remain in the soil as SOM.

However, this paradigm that only complex forms of carbon are more important for soil carbon sequestration has been displaced by a growing body of evidence that recalcitrance is not solely the most important factor for carbon stabilisation in soils7,9–11. These recalcitrant carbon compounds [such as plant structural residues] have a lower carbon use efficiency [CUE] than root exudates12–14. In other words, what that means is that it is easier and less metabolically expensive for microbes to consume root exudate carbon than it is plant litter carbon. Exudates are easier to digest, they can be readily assimilated and this more efficiently increases the overall microbial biomass production. Degrading plant litter on the other hand, comes at an energetic cost as microbes cannot assimilate it ‘as is’.

They have to synthesise and excrete extracellular enzymes first, which externally process and digest the complex litter into smaller components, which only then can be assimilated. Consequently, the synthesis of these extracellular enzymes wastes or costs microbial energy and overall, microbes grow less biomass per unit of C when feeding on litter vs exudates12–14. How more or less efficiently different C inputs grow microbial biomass is a critical factor because as recent studies suggest, it is dead microbial bodies [microbial necromass] that contributes so significantly to the genesis of SOM15,16 and root exudates are estimated to fuel more than 50% of belowground foodweb activity17–19. Roughly put, the more efficiently we can grow microbial biomass, the more potential to ultimately sequester SOM – and root exudates have a higher CUE than litter inputs12.

Again, I must stress that litter inputs still play a role and are still important overall to create the microclimate for the soil, but here I am focussing on ‘efficiencies’ and in this context, gains are to be had by shifting thinking belowground.

What does all this mean from a practical application point of view? How do we interpret the science into applied and actionable strategies for soil health? Does the new evidence supersede previous paradigms of soil carbon sequestration or do we need to integrate them together into a consolidated view? Stubbles may well be the less ‘efficient’ way to build SOM but they sure bring hugely significant benefits to overall soil function by protecting the soil and creating an ideal microenvironment for the belowground interactions to work more efficiently.

Not to mention their importance for birds of course. Residues for moisture conservation may also become more and more essential [particularly in east], but perhaps what we need is an additional focus on root biomass and maintaining a living root in the soil as well. How the principle will be applied should be interpreted and translated into the field conditions on a farm by farm and case by case scenario. But for example, some strategies to maximise the performance of living roots might be:
1. Cover crops – help to extend the growing season outside of the main cash crop season and hence help to maintain a living root for more months of the year. Cover crops are also an ideal means to select some deeprooted species to encourage greater root biomass production.
2. Intercropping – intercropping and companion cropping hold great potential as the companion plant could be selected for its belowground rooting behaviours – for example grow the cash crop for its shoots [yield] and the companion for its roots and exudates [SOM]. Legumes are a particularly good choice as a companion due to the higher quality residues they input into the soil. Relay intercropping with cash crops can also extend the number of days with living roots in the soil and that means more highly efficient exudates leaking into the soil.
3. Integrate Perennials – perennials allocate more C belowground than annuals and being perennial, of course they maintain a living root in the soil for longer. The use of rotational leys integrated with livestock can also help across an arable rotation.
4. Increase the root:shoot ratio – select varieties of both cash crops and cover crops with more root biomass and better root traits – deeper roots, more branching roots and more fine roots are particularly ideal. Traditional varieties hold particular potential but even modern varieties have much variability in rooting biomass.
5. Increase plant species diversity – different plant species have different rooting architectures, root depths, root C:N ratios and root exudates.

There is no doubt that covering up and protecting the soil surface is of fundamental importance for optimising soil quality and crop productivity. With the recent interest in building soil carbon levels, it is clear a greater focus on strategies to also encourage belowground carbon allocation is required. Traditional efforts focussing solely on maximizing the amount of residues on soils and minimizing physical disturbances such as tillage, may need to be rethought to ensure that the performance of living plants within the system is integrated for both yield and soil functioning. Consequently, coupling together both the use of stubble residues and living roots should be a key priority moving forward; along with selecting species or varieties of cash and cover crops with greater root biomass and designing with more plant species diversity.