Show us your David Brown Tractor!

Horticulture
Also would anyone know the amount of torque needed on the bolts?
D

Horticulture
And one more question. Our brakes are ceased on the tractor, how would we free them?

Bald n Grumpy said:
Someone who had been on a tour of banner lane told me how a nut in the gearbox had to be torqued and was essential it was done. Went out on the production line and someone picked up that the nut was not checked with a torque wrench just a bloke with a big spanner and a lump hammer. This was brought to the attention of the tour guide who picked up a torque wrench and checked about 6, all were spot on. Think maybe it was a party trick for the tour guides
Was father in law at browns? What did he do there
Click to expand...

He was in charge of engine manufacturing.

Db Donnchadh said:
Also would anyone know the amount of torque needed on the bolts?
Click to expand...

Go here and download F for all engine data

And M shows how to remove reductions to get at the brakes, where I think the shaft through the backplate will be seized. Pay attention if removing the right hand reduction the diff lock must be engaged, and these things are heavy requiring more than one person unless such as an engine crane is available.
B

Db Donnchadh said:
How do I know they are fitted right way up and oil rings alternated?
Click to expand...

Without stripping and refitting it's difficult. How much experience did whoever fitted them have and how much confidence do you have in them.
Like I said if they're not right its a waste of time and you won't know until its all up and running.
B

Netherfield said:
He was in charge of engine manufacturing.
Click to expand...

Bet that was useful back in the day

Bald n Grumpy said:
Bet that was useful back in the day
Click to expand...

Never short of parts books or maintenance manuals, he would just ring publication and have them sent to his office, he got me the piston tool and a valve seat cutter, but they were well used and being replaced by new ones and would have only ended in the scrap bin.

Only other useful items were crankshafts, and these were also destined for the scrap bin because the journals had been damaged, 10thou regrind cured that but of course you couldn't send new tractors out with them fitted, although a large amount of 3 cylinder engines went out with liners fitted, someone had bored the block wrongly on a night shift operation, reckoned they couldn't afford scrap all those blocks, they were sent out to a former employee who now worked for himself locally.

Almost eyerybody who worked in O block (Engines) who had a Ford or British Leyland car had a spare alternator 'borrowed' from the factory, all they had to do was drop one and damage the end case and it was declared scrap, then if you needed to fit it to your car just swap the old cover over.
D

Horticulture
Hello, I was just wondering did anyone know what to do when the back wheels were ceased?
D

It could be any number of things, seized brake linkage, brakes themselves seized . hub bearings seized (unlikely but possible)
D

Vizslaman said:
It could be any number of things, seized brake linkage, brakes themselves seized . hub bearings seized (unlikely but possible)
Click to expand...

Where do we go from here then?
D

Horticulture
The tractors been sitting there about 10 years

Are both sides the same?

Sounds like the drums have got rusty and the shoes are now binding, especially if it's been parked all that time with the handbrake on, unwind the adjusters and give the reductions a good clout with a 14 lb hammer, undo all the reduction ring bolts and try pulling apart, might need a hammer and chisel to get started, once there's a gap it's tyre levers or jemmys to keep forcing it apart.
D

Horticulture
Are these the reduction bolts? And, which side do I open?
D

Horticulture
The both sides are the same
D 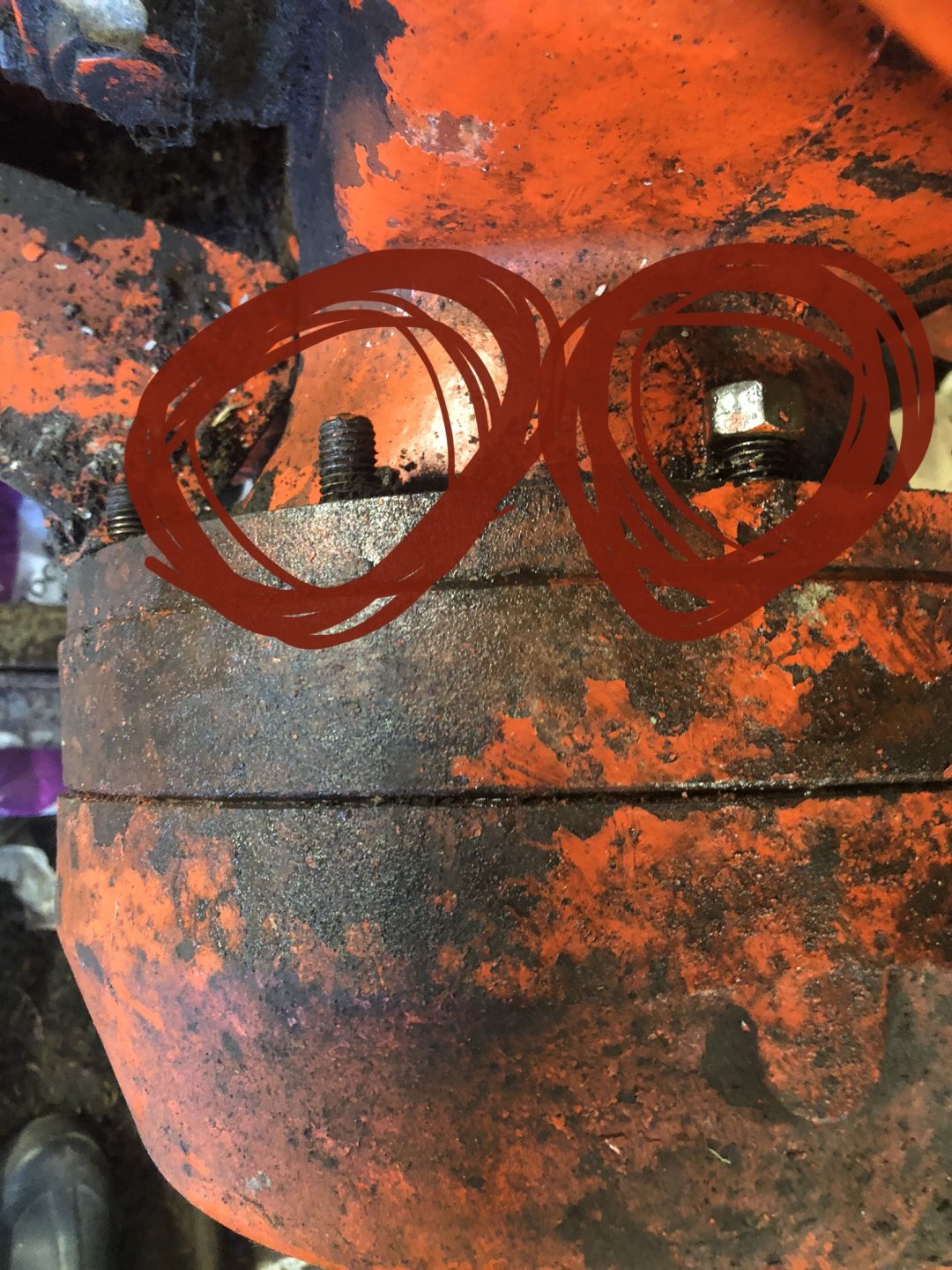 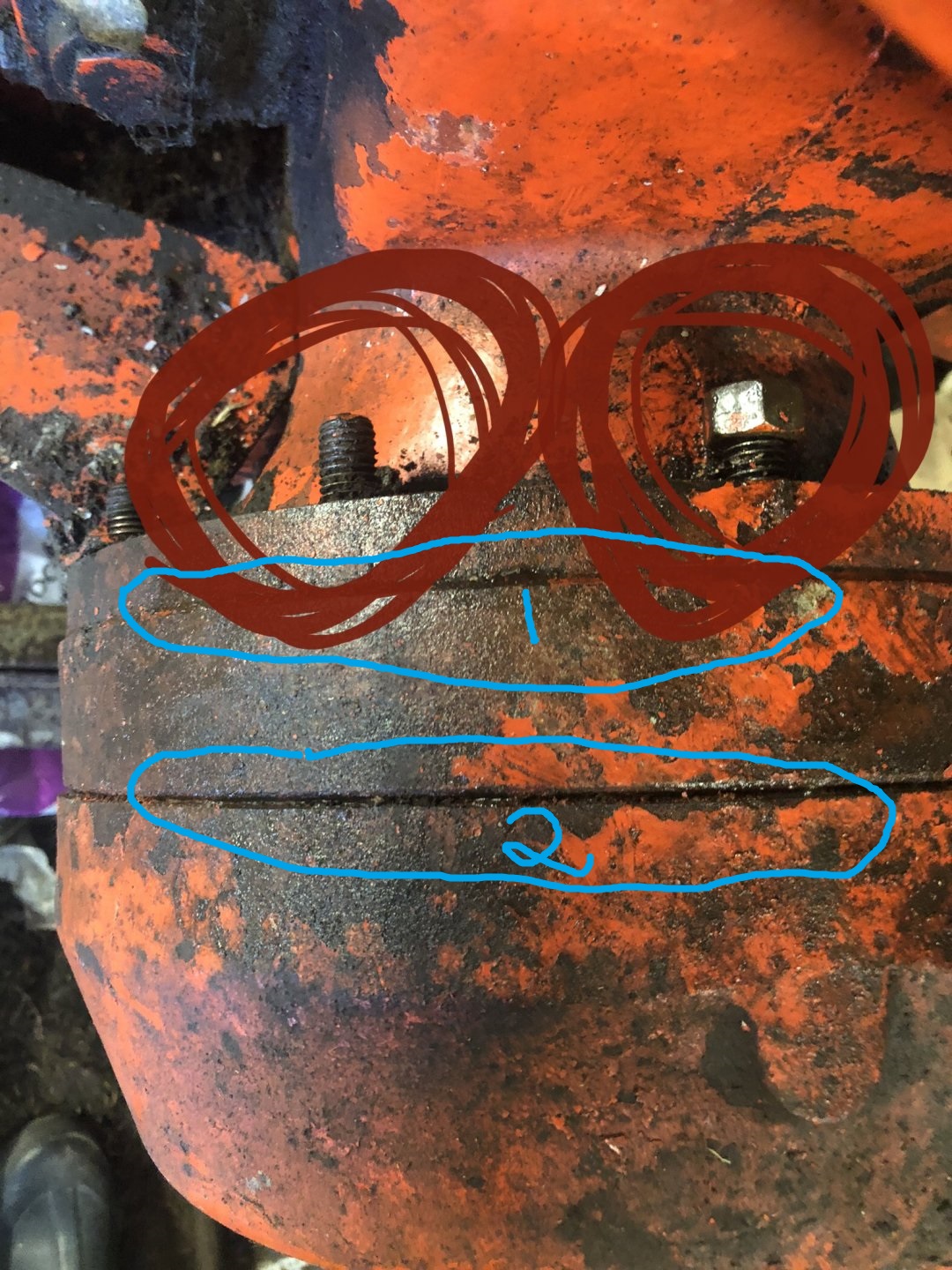 Yes those are the bolts/nuts to remove, the reduction splits at '2' above '1' is an extension piece for the wider brakes on the 12 series as opposed to the 996, can be a devils own job when they've not been apart for a long time, that's where you might need to start with a thin chisel something like a brick bolster is ideal.