Markets have been very sensitive to new news in recent weeks, with escalations in Ukraine providing underlying support. Increased sanctions on Russia from the West, coupled with poorer than expected US crop conditions have heightened supply concerns. In turn, this offered extra support to grain markets yesterday including European markets.

Since Wednesday last week (30-Mar), nearby Paris milling wheat futures have gained value. At the same time, UK feed wheat futures have lost value. When the UK supply and demand situation is tight it could come as a surprise that the UK didn’t track Paris. But this is where exchange rates play a part.

The power of exchange rates​

Shortly after the invasion of Russia on Ukraine we saw sterling gain strength versus the euro. When wheat markets jumped up, London futures didn’t record as strong gains as those seen in Paris futures because of the strengthening pound. 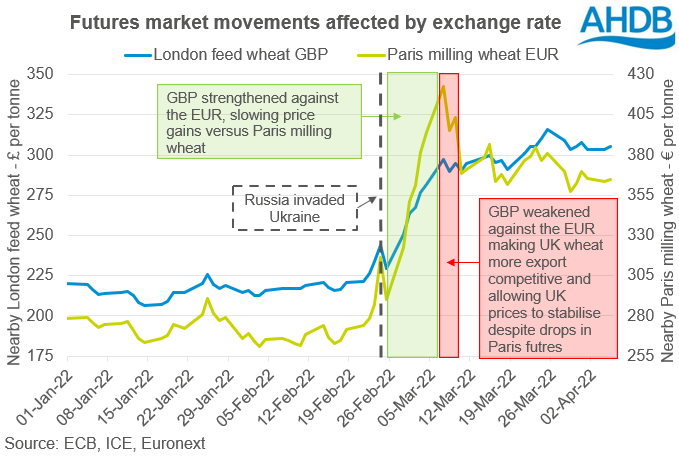 In the past week, we have seen a similar effect. Price gains have been limited in the UK as again, sterling has strengthened against the euro.

This said, the US dollar has strengthened against both the euro and the pound, but Chicago wheat futures (nearby) have gained greater value than both European contracts. You could expect European markets to have stronger gains than the US if based on the effects of exchange rates alone. However, Chicago contract movement is stronger on the back of US specific news in the past week. Last Thursday (31-Mar), US old-crop wheat stocks were pegged lower (as at 1 March) than trade expectation. At 27.9Mt, these are the lowest wheat stocks at this time of year since March 2008. And on Monday (04-Apr) the first official US crop conditions report of 2022 showed winter wheat conditions were one of the lowest this century. This news allowed US markets to move higher at a greater rate than other markets.