The first official 2021/22 supply and demand estimates have been released today. This includes insights into wheat, barley, oats, and maize.

The UK wheat supply and demand picture remains tight. Total 2021/22 wheat availability is estimated at 16.89Mt. This is 2.36Mt higher than in 2020/21, but still the second lowest since 2013/14. Wheat availability estimates have been reduced from earlier projections by 250Kt.

Why is this? Despite higher wheat production year-on-year, availability is tight this season owing somewhat to the tightest opening stocks this century. Adding to this, September saw a slow pace of imports, attributed to current sea freight issues and increased costs. As a result, import estimates have been trimmed this month from earlier estimates to 1.45Mt. This figure would be down 40% from last season but remains above 2019/20 levels. 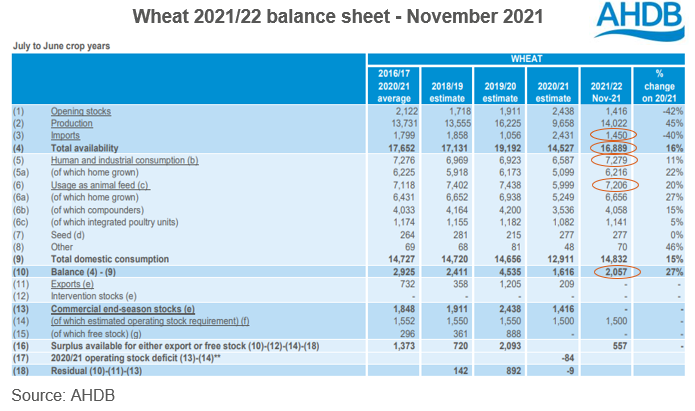 Despite tight availability this season, wheat consumption forecasts are strong. Human and industrial (H&I) usage for 2021/22 is forecast at 7.28Mt, up 11% from last season. Home-grown H&I usage specifically is also forecast to rise, up 22% on the year to 6.22Mt, on the back of higher production. Increases in consumption can be attributed to the bioethanol and starch sectors, with the introduction of E10. These forecasts assume a fully on-line bioethanol industry by the first half of 2022.

Total millers’ usage remains relatively stand on, year-on-year. Despite initial quality concerns, the functionality of UK wheat is reportedly better-than-expected. With sea freight issues rising freight costs, imports are estimated to be down year-on-year boosting home-grown usage. Though with issues in UK transport logistics too, there may be some regions in which sea freight could be utilised if more readily available.

Animal feed usage too is forecast up 20% year-on-year to 7.21Mt. This is down slightly from the early balance sheet, but close to the 5-year average (2016/17-2020/21) of 7.12Mt. With the discount of barley to wheat narrowing considerably in recent months, a higher wheat inclusion in rations is expected this season. However, labour and logistical issues in some livestock sectors are expected to trim compound feed demand in the second half of the 2021/22 season. Both inclusion and labour issues will be watched as we progress through the season.

Overall, the wheat balance of total availability and domestic consumption is estimated at 2.06Mt, just 441Kt more than 2020/21 levels and the third lowest this century. 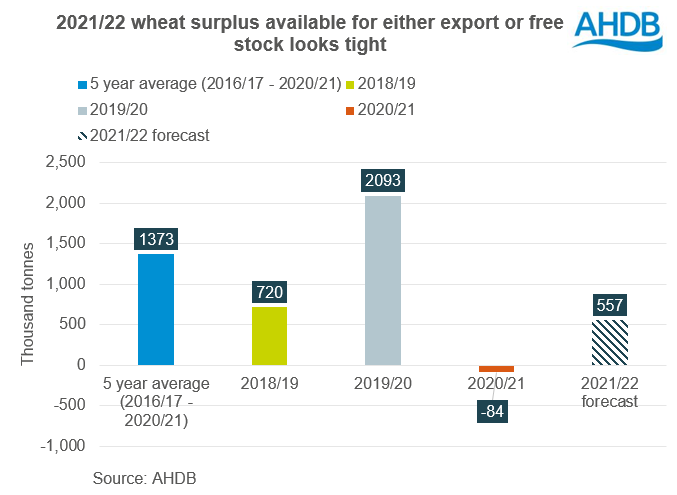 With a tight UK supply and demand picture, we could expect domestic wheat prices to remain relatively elevated this season. It could also result in low stocks heading into next season too.

As Helen pointed out last week, regional differences may become increasingly apparent as we head through the season. With northern and Scottish ex-farm wheat prices currently rising faster than other areas.

** Due to the highly unusual nature of the 2020/21 seasons hugely reduced wheat production figure, an extra line is included in the balance sheet to show the operating stock deficit