Soyabean consumption ahead of production for 2021/22​

In the latest WASDE, the USDA trimmed its Brazilian and Argentinian soyabean production estimates for this season (2021/22) by 5.0Mt and 3.0Mt respectively. These cuts were larger than average trade expectations but, did not go as far as some private forecasts. The cuts follow dry weather in South America.

World consumption too was reduced in January’s WASDE. However, this was only by 2.1Mt to 374.9Mt. Consumption now exceeds this season’s estimated world production by 2.4Mt. 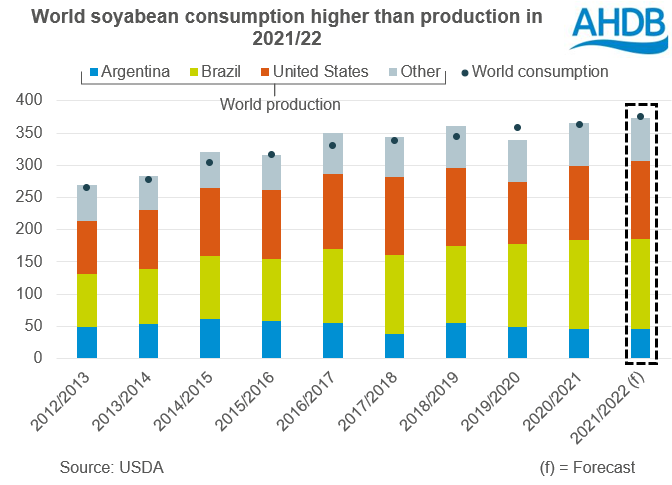 As a result, the global stocks to use estimate for soyabeans (2021/22) reduced from 27.1% in December 2021, to 25.4% this month. This presents a very tight picture for soyabeans for the remainder of the season, even if production estimates take no further cuts. 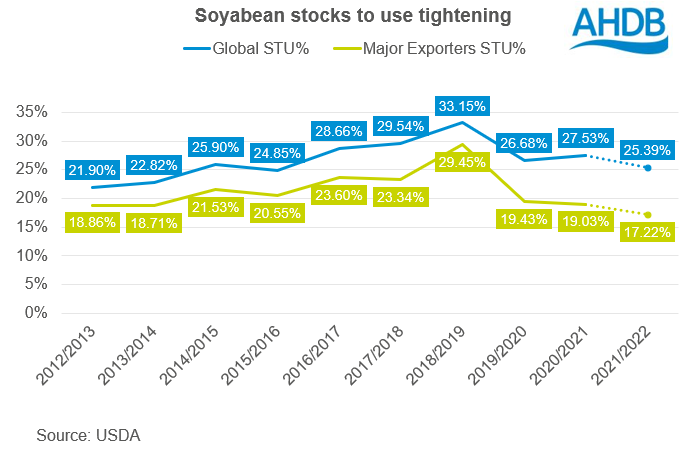 What can tighten this picture further?​

With such tight stocks, the market will remain sensitive to new ‘news’ on South American production, whether this be bullish or bearish news. This is because South American crops are set to make up a large proportion (54%) of global soyabean production this season (2021/22). Further cuts to production may tighten the soyabean supply picture further, lending price support to rapeseed also.

Rains arrived in Argentina over the weekend, bringing relief to soyabean and late-planted maize crops. The weather forecast looks mixed this week. Argentina is due rain in most areas, but the heaviest rain is due towards the end of the week (Refinitiv).

China too is one to watch in the supply and demand balance. Soyabean imports are reportedly down year-on-year, though pork output is understood to be almost back in line with pre-African Swine Fever. Something to watch going forward.