The Plant Microbiome: An Introduction

Soil Biology – two words that have become commonplace in the lexicon of the farming community in recent years, and rightly so. Biological interactions are of course as important as the physical and chemical interactions that make up the fascinating medium we call soil. Among all the groups of organisms that live in soil, there has been a particular growing focus on the microorganisms; interest in which gained significant traction as we began using more powerful tools to study them – genetic and molecular tools for example. As we began to unearth the world of the soil microbiota, we quickly realised just how vast and complex this underground universe really is – certainly much more so than previously thought. In dealing with this complexity, one branch of research has shifted attention away from the soil to study the microorganisms that are associated with plant tissues – enter the plant microbiome. 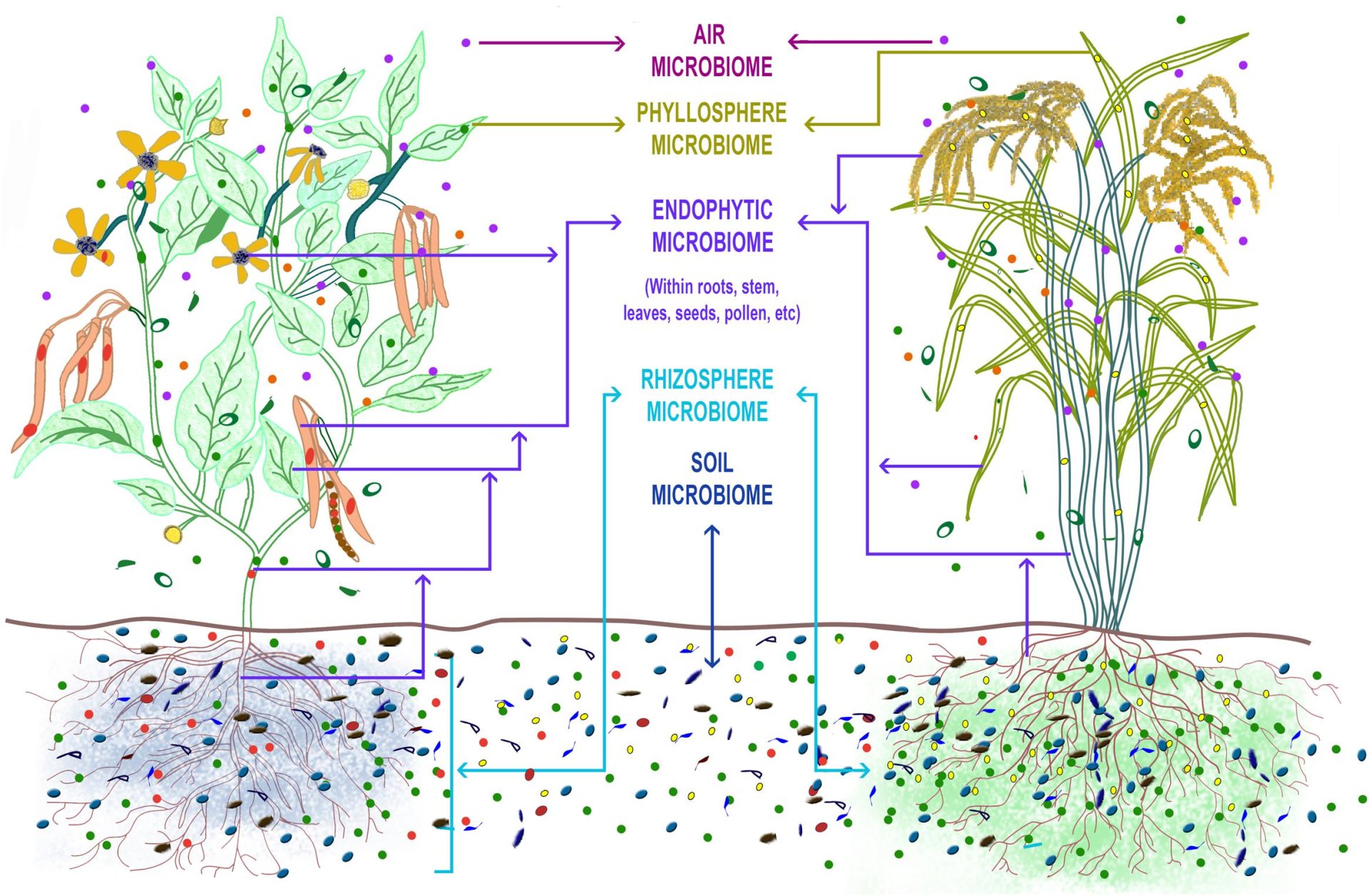 The plant microbiome – also known as the phytomicrobiome – refers to the groups of microorganisms that are intimately and directly associated either on or within various plant tissues. The number and diversity of organisms that make up the plant microbiome is a fraction of what is found in the bulk soil, hence the emerging focus on studying this less complex plant-associated ecosystem. Please note, I use the words ‘less complex’ very cautiously here – arguably, there is nothing ‘less complex’ about it at all apart from having less diversity and density of organisms.

I’m sure most readers will be familiar with the below ground community of microbes known as the rhizosphere but the above ground plant habitats are collectively known as the phyllosphere.

These microbial communities consist of bacteria, archaea, fungi, viruses, algae, and occasionally nematodes and protozoa (these latter two are much more common down below in the rhizosphere but less so above ground). Bacteria are by far the most commonly found microbe above ground in terms of both numbers and diversity. All of these microbes that associate with the plant are either acquired from the environment (soil and atmosphere) or they are inherited from the mother plant via the seed.

Within each of the plant associated habitats, some microbes live inside the plant tissues (endophytes) while others will remain outside of the plant, living on the surfaces (epiphytes). There is some overlap between the microbes that associate on various plant parts, but surprisingly, many of the species are totally unique and distinct from each other, fulfilling very specific roles and functions within each of their micro-habitats. Let’s briefly explore some of the different regions of the phytomicrobiome:

Root microbiome – often referred to as the rhizosphere, this is of course the microbes who associate with plant root systems. Arguably the most well studied of all plant microbiomes, the organisms in the rhizosphere play particularly important roles for nutrient acquisition, plant immunity and resilience during environmental stresses.

Shoot microbiome – the microbes that dwell in shoot tissues appear to be more closely related to the species found in the soil highlighting the soil as an important primary source of organisms which colonise the plant. The endophytes found in the shoot are highly mobile within the plant and are also commonly found in the seed – forming part of the seed microbiome for the next generation.

Leaf microbiome – the leaf microbiome has been shown to influence photosynthesis and transpiration hence playing a vital role in plant development, particularly under difficult climatic and weather conditions.

Flower microbiome – our understanding of the microbial communities that uniquely associate with flowers is far less when compared to other above ground plant habitats. This is particularly due to the fact that these attractive habitats receive more regular visitation by a diverse range of insects who facilitate transfer of other beneficial and pathogenic microbes; as well as inadvertently leaving a fingerprint of their own insect-associated microbiota. As you might guess, the organisms associated with flowers have been implicated in influencing plant reproductive success – they have even been shown to use flower scents (volatile organic compounds) as a food source and additionally induce distinct changes in the expression of a plants floral scents.

Seed microbiome – like other parts of the plant, the seeds are also colonised with a diverse group of microbiota. At the end of reproductive development, the organisms on and within seeds act as a reservoir for the next generation and typically establish as endophytes in next years offspring. Functionally speaking, the seed microbiota release a range of metabolic substances that enhance germination and establishment as well as plant performance and productivity under stressful conditions. We will return to the seed microbiome in the next issue of Direct Driller and will expand on this article with a deeper dive specifically into the role of the seed microbiome.

There is an increasingly prominent nudge towards reducing fertiliser and pesticide use in agriculture from both top-down (policy) and bottom-up (consumer driven). There is significant potential in the use of DIY or commercial microbial inoculants to support this transition, however, many challenges remain regarding improving product consistency in field conditions. Central to achieving this is the need for a deeper understanding of the ecological processes and mechanisms that underpin the plant microbiome assembly and function. Addressing these knowledge gaps will no doubt help provide the necessary tools to support agricultures transition toward ecological and productive sustainability.