The war in Ukraine...

Not a militarised society. Not in the uniforms or outward symbols certainly. A heavily armed society in an unobtrusive and almost apologetic way. A society prepared for any eventuality. A society that NATO will benefit greatly from having as a member. https://www.theguardian.com/world/2022/apr/22/how-finland-bunker-mania-made-sense 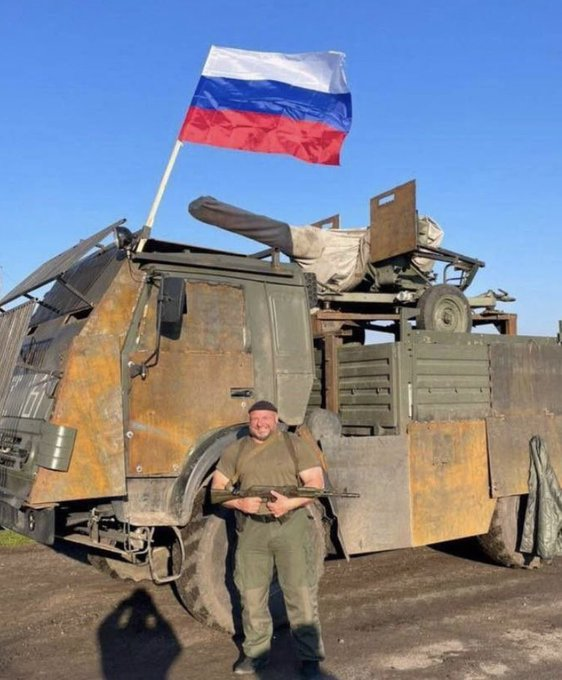 Yea, my bad. Not the place between Russia and turkey

Muck Spreader said:
Oh dear, not another fire in a vital Russian unit.

Whos behind all this?

hoff135 said:
Whos behind all this?
Click to expand...

Could it be the old Russian policy of shipping Ukrainians off to Russia that has come back to haunt them? It might have led to a ready made 5th Column inside Russia, who are busy sending packages or leaving items in the bin where they work. What goes around comes around.

Red Fred said:
Could it be the old Russian policy of shipping Ukrainians off to Russia that has come back to haunt them? It might have led to a ready made 5th Column inside Russia, who are busy sending packages or leaving items in the bin where they work. What goes around comes around.
Click to expand...

There were anti-war/Putin protests. A few brave souls who were stern enough to protest publicly. I am sure there will be greater numbers who will be more than pished off with the situation and probably planning some sabotage of their own.

Imagine being a working Russian right now. Your economy is tanked. The Rouble is worthless. I'm not sure how readily you can even leave the country or move money. All the Western brands you maybe liked are gone- Nike, McDonalds, the lot, all shut up shop. Apple pay no longer works. It must be a miserable existence before you consider the countless dead or wounded or missing they must be hearing news of. I'd be pished off as well and start turning my mind toward some kind of nefarious way of getting my own back.
H

Germans blocked them as well

hoff135 said:
Whos behind all this?
Click to expand...

Henarar said:
Germans blocked them as well
Click to expand...

Being thick, the long-term blocking of NATO expansion by some - principally France and Germany, but I'm open to correction on that - didn't really occur to me as having any particularly sinister overtones at the time.

However, seeing the current reluctance to help Ukraine in a number of ways, it seems now to be at best questionable. Of course, it will be defended by arguing about economic, political and military readiness, and that's fair enough; but... it can't excuse or remove the stain of not doing enough now.

As a related aside, if either or both of these countries really do want to see an alternative to NATO - with more than just them in it - they really don't seem to be thinking very far ahead. Nor for the advancement for the sort of federal / closer EU that they seem to envisage - hard to think of a way in which to irritate the Eastern EU states more than act as they are now..

I sometimes wonder if they aren't in fact planning a much-reduced EU in the end; maybe back to the 1995 membership; I'm not saying the EU is planning this, just those two, maybe...

Everything that they've done so far, they have first accused others of...

Putin must be told in no uncertain terms that this is a no-go.

But with what further threat, making Ukraine a NATO protectorate?
M

Are these Russians mature adults? They sound like big kids with access to the nuke cabinet. Their arguments are so childish with blatent lies. Much worse than the cold war lot it seems to me.

I put this photo up on the thread of this most unwarlike young Russian conscript on his way to the Ukraine about a fortnight ago. Sadly he was killed in action after just 4 days in the Ukraine. But his parents get a fuking medal. 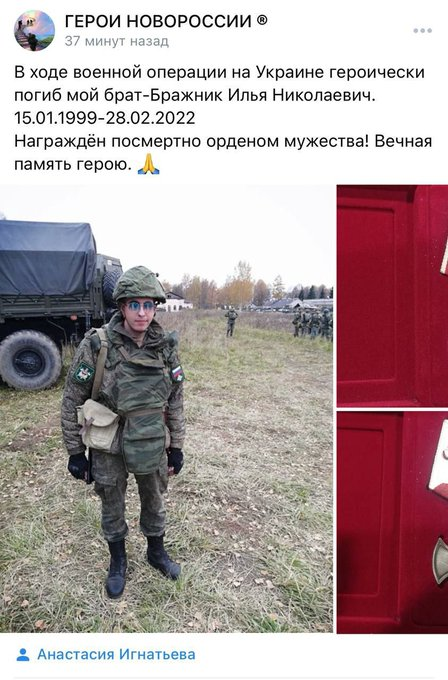 Livestock Farmer
As Max Bygraves used to say “I wanna tell you a story” that I heard the other night which goes something like this.

In the story very senior people in the USA with the real power & I don’t mean Biden were very rattled & panicky at a proposed Russian Chinese alliance that was seriously in the offing to be signed, with Chinese eyes on Taiwan & Russia’s on Ukraine the US defence department made the decision that for the sake of world order this could not be allowed to happen, one of the two countries had to be depleted considerably militarily to stop this & obviously it could not be China, so a brilliant plan was concocted.

It was well known by all that Putin was alarmed that Ukraine might join NATO so someone tips off the Russians that with just the right amount of pressure the Ukraine leadership would now be prepared to back down & agree to stay out of NATO & compromise on other things.
As Russia took the bait & moved troops & armour to the border the USA & UK packed sophisticated weapons into Ukraine (with more eyes in the sky than stars) in preparation.
For the plan to work Putin needed to invade but he hesitated & continued to hesitate when the Ukraine leadership kept saying that Ukraine would not back down, so unusually the US defence department in desperation had to keep giving out normally top secret warnings to the world that an invasion was imminent, when Putin couldn’t sit on his hands any more without looking desperately weak he finally invaded, you could say the trap was then sprung, every Russian tank was tagged by the eyes in the sky & all that information was fed to the defending army & as reported today not only Ukrainian troops, the defence of Ukraine was then effectively being manipulated by the Americans.

Whether any in the Ukrainian leadership knew that their country was considered acceptable collateral damage by the Americans is debatable, the clever thinking was that after considerable damage had been done to Russia’s militarily hardware Ukraine would give in & a sort of peace would be agreed, unfortunately the plan did not anticipate both Ukrainian stubbornness, Zelensky's world tour by video & the world’s reaction piling Ukraine with many weapons from other countries & holding out for so long.

In this wild story the US & UK had pushed Putin very much further than was originally planned & were becoming very worried & unsure just how this would all end.

manhill said:
Are these Russians mature adults? They sound like big kids with access to the nuke cabinet. Their arguments are so childish with blatent lies. Much worse than the cold war lot it seems to me.
Click to expand...

I don't know if it funny or dangerous but lots of russians on TV and politicians talk like they are the only ones with them. Boasting on TV about nuking new York, as if they ain't coming back

The brain trust meeting got a little disrupted.

In other news, the 113(?) year old ship that was launched before the soviet union even existed sent to the moskva wreck site has a submersible that itself had to be rescued in 2008. Could you even make russia up?