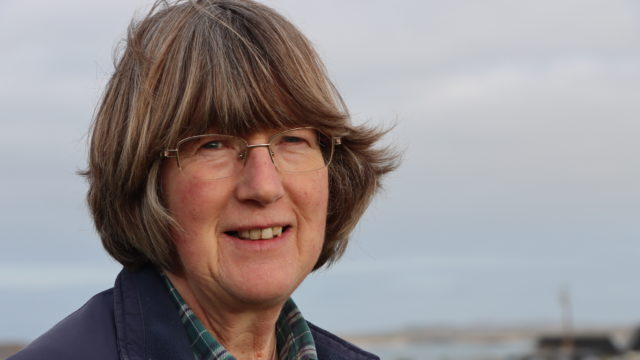 Susan Lamont from Tiree is this year’s recipient of the Stalwart award, presented annually by NFU Scotland’s Argyll & the Islands region.

The Stalwart award, created in 2016 and awarded for the first time in 2017, recognises those who have given time and effort to the work of the union in Argyll & the Islands or have made a significant contribution to agriculture in the area.

Lamont, who has been NFU Scotland branch secretary on the island for more than 20 years, and who was also previously the NFU Mutual agent, was nominated by Pat Boyd, the current Tiree Branch Chair and seconded by Tiree’s regional board representative Alastair MacInnes.

Boyd, who qualified as a vet at Glasgow University alongside Susan in 1977, praised her for being loyal, reliable and hard working. It was while covering the vet practice on Tiree and Coll as a locum that Susan met her husband, crofter Angus Lamont.

“Susan threw herself heart, mind and soul into crofting. She became very adept at all sheep and cattle work on the croft, including shearing.

“If I was away on holiday she would not only cover as locum but look after my stock too.

“I knew that all the animals on both Tiree and Coll were in safe and capable hands in my absence.

“When the post of branch secretary of NFU Scotland became vacant in 1998, Susan enthusiastically took up the reins. In this role, Susan was always ready to respond to a consultation on behalf of crofters.

She would also write to MPs of any political persuasion, or converse with CalMac to voice concerns or grievances.
Click to expand...

“Susan expressed the wish to retire as branch secretary a few years ago, but when no one could be found to replace her, she put her interests aside and agreed to remain in post.”

Lamont has served on the island’s new mart committee; represented the island’s interest on the 2007 Shucksmith Committee of inquiry into crofting; served for many years on the Tiree Rural Development Committee and been a valued member of the Tiree Transport Forum since its inception, helping to secure additional flights and sailings on timetables.

Lamont was also involved during the recent link span replacement at Tiree pier, when everything had to be timetabled to ensure there was enough cattle and sheep feed stored on the island, and that sale cattle had moved off before critical parts of the project began.

Lamont has also been a member of the Local Goose Management Group and was able to assist in setting up the Uist, Coll and Tiree Barnacle Goose Management Scheme, enabling crofters on these islands to access funding for the first time, for grazing Barnacle geese.

The thing that most impressed the judges was all the volunteer work that Susan has been involved in over the years and how she has tirelessly gone above and beyond to support the crofting and farming community on the island, both within and out with her role as the local branch secretary.
Click to expand...

“In the nomination, it was pointed out that Susan has done more for crofting on Tiree than any other crofter in the last 35 years.

“That epitomises the definition of ‘stalwart’ and Susan is a very worthy winner of this prestigious award.”