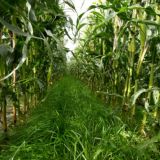 Hutchinsons trials in Cumbria are showing how a low-cost way of undersowing maize with Italian ryegrass could have significant benefits for soil health.

The trials at the firm’s Smalmstown Farm demonstration site near Carlisle, kindly hosted by Mr & Mrs R Fisher, aim to find a cost-effective way of preventing the potential issues that can arise when bare maize stubbles are left over winter.

“In some areas cover crops like brown mustard, fodder radish, stubble turnips or vetch, can do well in a similar role, but they really need to be sown early in the autumn. A lot of cover crop mixes just don’t perform well enough in this region, especially if they’re being sown late after maize.”

In contrast, the Italian ryegrass can be sown in the summer into a standing maize crop, so cover is already well established by the time the forager goes through.

In the Hutchinsons trial, a slug pelleter mounted on a self-propelled sprayer was used to broadcast three rates of Italian ryegrass seed, at 3kg, 6kg and 9kg/acre, into the five-foot high crop on 5 July and results so far look promising, Mr Clark says.

“It rained two days later, so seed on the ground struck straight away and greened-up nicely with no detrimental effect to the crop. It seems 6kg/acre is the minimum seed rate needed, while the 9kg rate looks as though you could graze heifers on it.

“Drilling Italian ryegrass as a cover crop after maize is popular in Holland where bare winter stubbles aren’t allowed. It is attracting more attention here, although drilling won’t work where plastic is on the ground until late in the season. There’s also the extra cost.”

Broadcasting seed however, is relatively cheap given a typical contractor charge of £1/acre for slug pelleting and seed cost of £20-25/acre at the 9kg rate. “You could get away with 6kg/acre, which would cost nearer £15-17/acre.”

Sowing ryegrass late in the season means it is unaffected by residual herbicides applied earlier, he notes.

Spotlight on varieties and nutrition
Some 17 new and existing maize varieties have also been trialled at Smalmstown Farm this season, sown on 20 April under plastic film and in the open.

Of those trialled, Pioneer’s hybrid P7326 once again stands out, as does newcomer Cardiff, from Spanish breeder Fito.

“P7326 has been the mainstay in this region and for good reason,” says Mr Clark. “It’s performed consistently and can deliver 30% dry matter and 30% starch despite the wetter climate. It’s got quite early maturity (rated 170), but still adds good bulk.”

Cardiff appears a slightly more “bulky” variety that is later to mature (rated 190), so suits earlier drilling, he adds. It will be available through Hutchinsons next season.

“All of my maize in this area is grown under plastic and from our trials I see no reason for this to change,” Mr Clark notes. The additional dry matter yield usually outweighs the extra cost, plus growers are guaranteed an earlier harvest and better feed quality by growing maize under film, he says.

But not all varieties are suited to growing under film, especially those that are very early maturing (150-160), which struggle to yield enough to justify the extra cost.

Another trial at the site indicates there could be clear benefits from late-applied foliar nitrogen to feed maize during cob-fill.

“Widespread use of manures and slurries means there’s often high residual soil nitrogen on land going into maize, but levels decline through the season, just as crops need it to fill cobs. We’ve definitely seen a benefit from feeding maize late in the season, which this year was on 5 July, at the same time we broadcast the ryegrass.

“We’re on the extremes of the maize-growing area here, which can make it a challenging crop and really highlights the value of local trials such as this for seeing how varieties and agronomy strategies perform before adopting them on-farm,” Mr Clark concludes.

All plots will be taken to harvest, which is expected to be around the end of September/ early October, to allow final yield and quality comparisons.