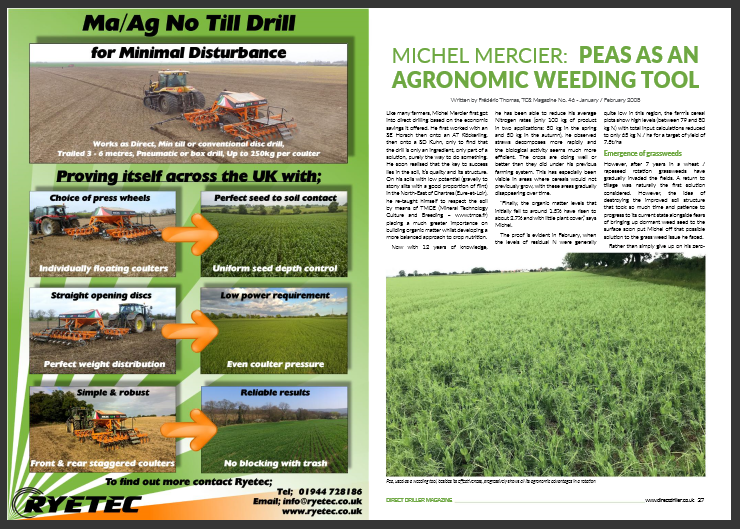 Like many farmers, Michel Mercier first got into direct drilling based on the economic savings it offered. He first worked with an SE Horsch then onto an AT Köckerling, then onto a SD Kuhn, only to find that the drill is only an ingredient, only part of a solution, purely the way to do something. He soon realised that the key to success lies in the soil, it’s quality and its structure. On his soils with low potential (gravelly to stony silts with a good proportion of flint) in the North-East of Chartres (Eure-et-Loir), he re-taught himself to respect the soil by means of TMCE (Mineral Technology Culture and Breeding – www.tmce.fr) placing a much greater importance on building organic matter whilst developing a more balanced approach to crop nutrition.

Now with 12 years of knowledge, he has been able to reduce his average Nitrogen rates (only 100 kg of product in two applications: 50 kg in the spring and 50 kg in the autumn), he observed straws decomposes more rapidly and the biological activity seems much more efficient. The crops are doing well or better than they did under his previous farming system.

This has especially been visible in areas where cereals would not previously grow, with these areas gradually disappearing over time. “Finally, the organic matter levels that initially fell to around 1.5% have risen to about 2.7% and with little plant cover,” says Michel. The proof is evident in February, when the levels of residual N were generally quite low in this region, the farm’s cereal plots show high levels (between 79 and 80 kg N) with total input calculations reduced to only 65 kg N / ha for a target of yield of 7.5t/ha Emergence of grassweeds. 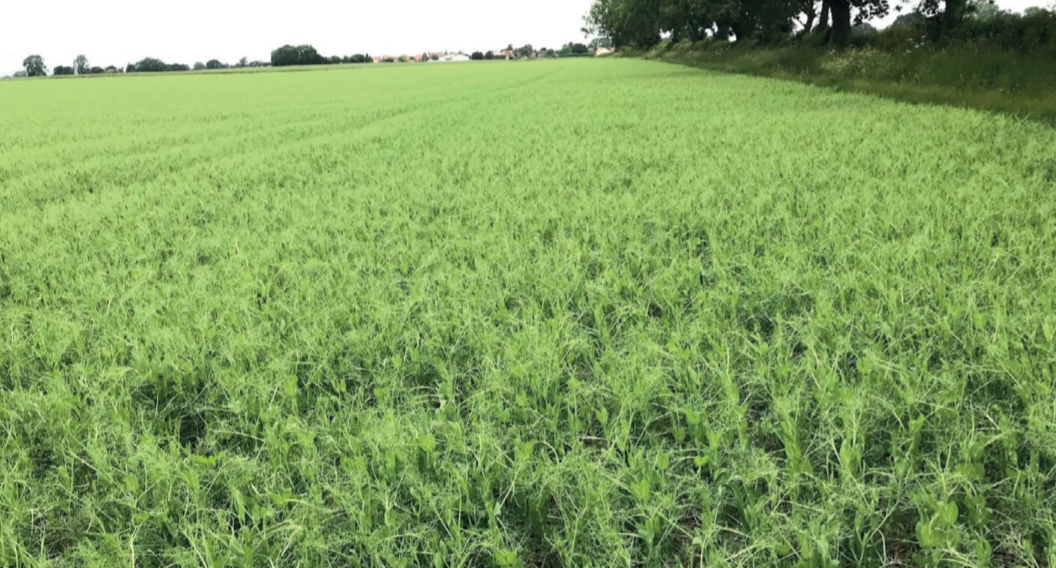 Pea, used as a weeding tool, besides its effectiveness, progressively shows all its agronomic advantages in a rotation

However, after 7 years in a wheat / rapeseed rotation grassweeds have gradually invaded the fields. A return to tillage was naturally the first solution considered. However, the idea of destroying the improved soil structure that took so much time and patience to progress to its current state alongside fears of bringing up dormant weed seed to the surface soon put Michel off that possible solution to the grass weed issue he faced. Rather than simply give up on his zero-till journey Michel sought alternatives through agronomic rather than mechanical change, growing peas between wheat and OSR creating a double break in his rotation.

The first results are very encouraging and for the past five years, this practice has been systematically used on fields where the level of grassweeds had become difficult to manage. Growing Peas after the wheat crop allows enough time for a cover crop to be established further helping increase Michel’s soil organic matter levels and biological diversity. Inter row weeding of the pea crop is possible via mechanical hoe further helping to reduce the grass weed issue.

The following OSR crop is seeded between the rows of the pea crop. Pea Rapeseed: A Faultless Combination With very few slugs and straw residues, a good structure and a lot of nitrogen in the profile, the planting of rapeseed becomes easier and establishment without need for placed seed bed N more consistent and reliable. Even if pea regrowth develops it is not a problem in the OSR crop, on the contrary, and in any case, they will be destroyed by frost.

The program of weed control of the rapeseed remains traditional with an autumn propyzamide application to finish the work of cleaning grassweeds and leave a clean start for the following wheat crop. The following cereals are generally clean and it is in these plots that Mr. Mercier now chooses to grow his seed for the following season. Finally, because of this sequence, he also finds a higher nitrogen availability which to some extent compensates for the lower margin of the peas in this more diverse rotation meaning that the overall rotation margin is little changed financially.

However, the pea crop, profitability is lower than the OSR break so remains for the moment only an agronomic weeding tool, as pointed out by Michel, who tends to remain in rapeseed for as long as possible on his land that suffers no grassweed problems, which offers the superior gross margin.

Hybrid rye: an opening interesting for small lands For four years now, Mr. Mercier has been growing, hybrid rye as an alternative to wheat with yield potential on his farm about 10% higher than that of a soft wheat especially in a dry season It’s a much more aggressive, more robust and better able to access soils residual nutrition with average nitrogen application usually 60 kg / ha against 130 for his wheat. Another advantage is that establishment is earlier, which helps spread autumn workload, typical seed rates of 30 to 35 kg / ha for 100 to 120 p / m² also aid logistics. In hope of further reducing costs and increasing efficiency this year Mr. Mercier set a trial with only 16 kg / ha of seed for a density reduced to 50 p / m². His hope is that the lower seed rate crop may reduce disease and therefore fungicide use, as in spite of the plants robust agronomic nature, it is necessary to remain vigilant on rust and a good growth regulator programme is very important to keep thicker crops standing . Satisfied with this new system, the rotation is slowly moving towards: pea / canola / wheat / canola / rye.

Read the article on Page 7 of Issue 2 of Direct Driller Magazine here.
Click to expand...