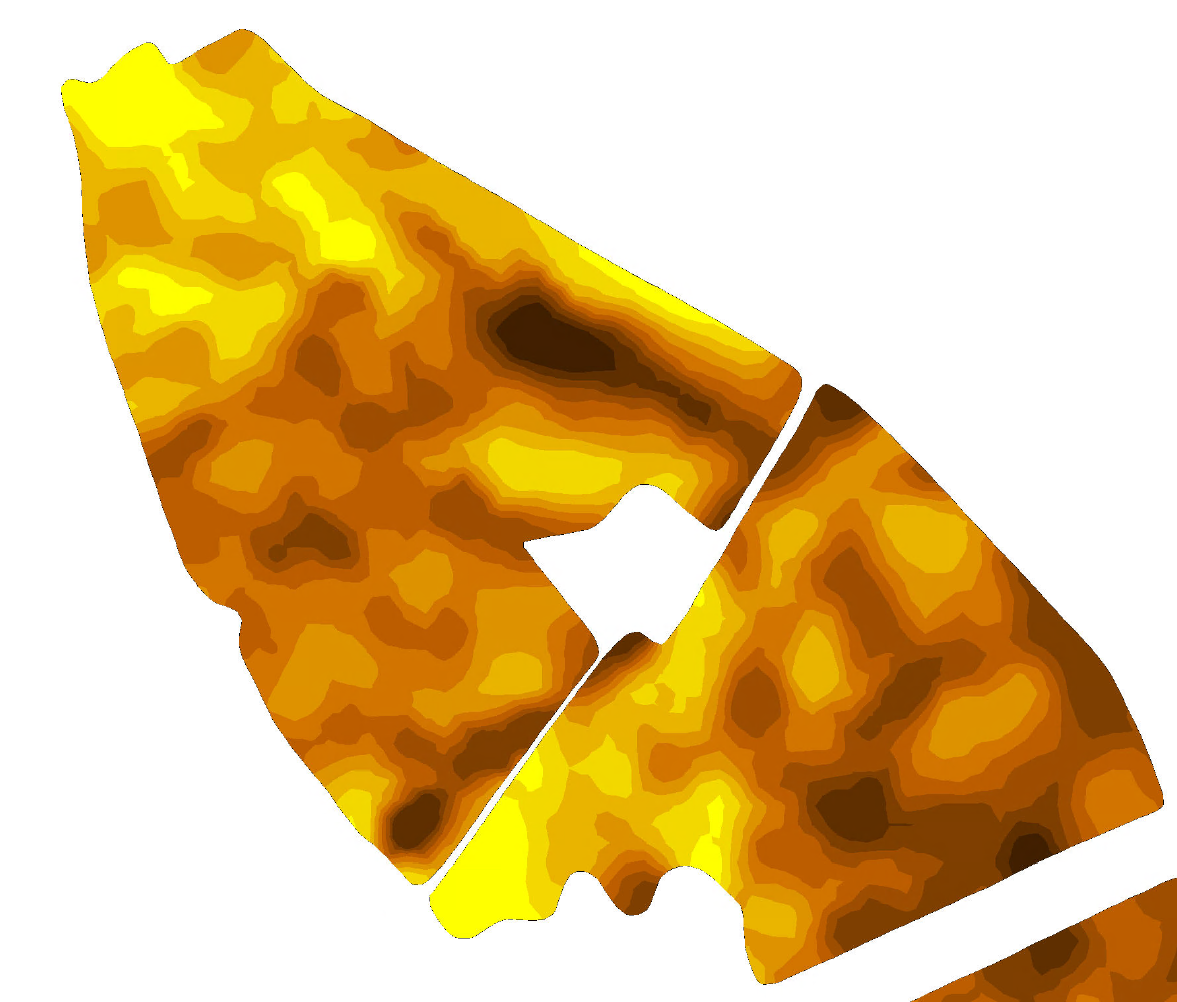 then ground truthing by a soil scientist to produce this; 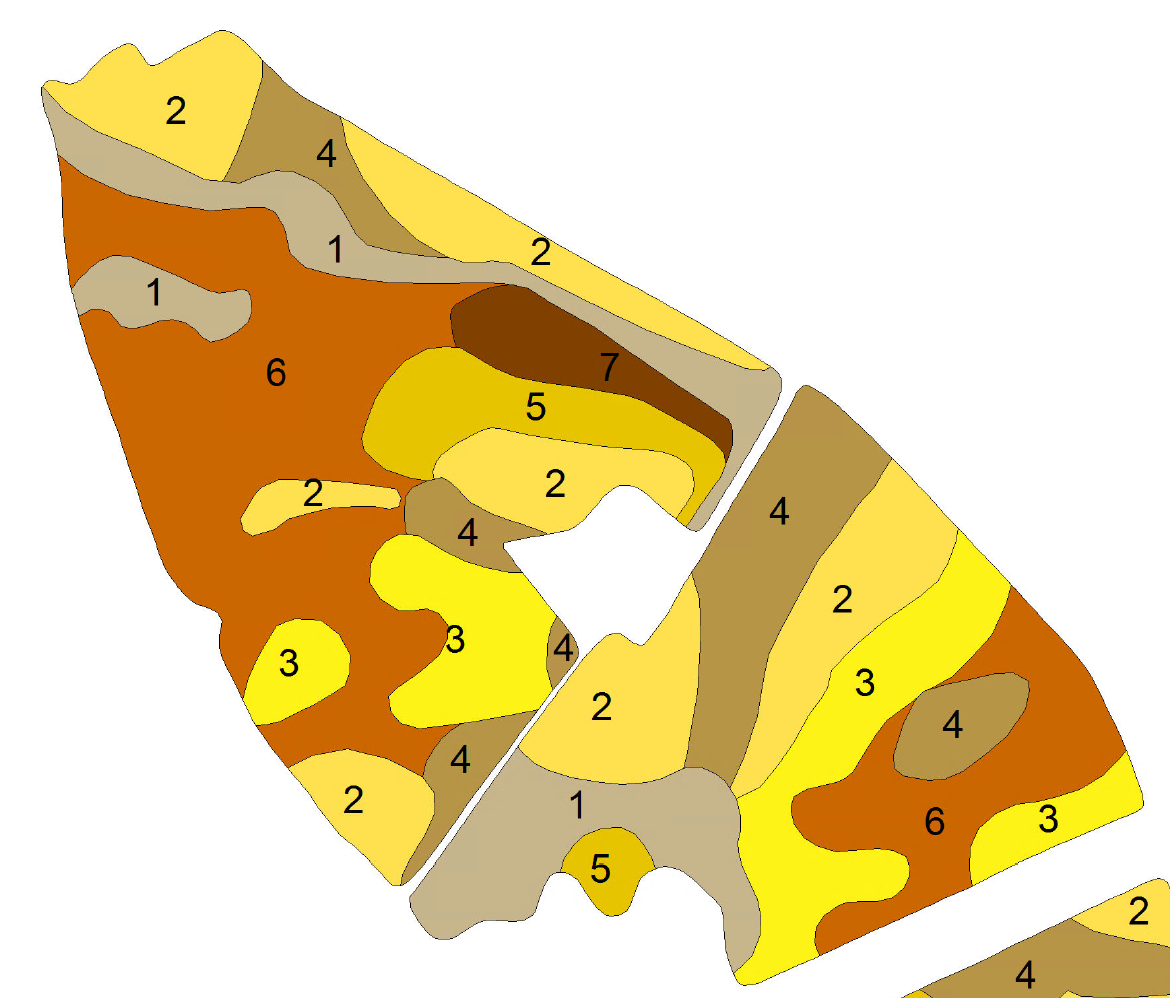 Don't worry about the numbers too much - the higher numbers indicate a higher conductivity = higher water content = higher clay content. The zoning and establishment estimation is the most important bit. 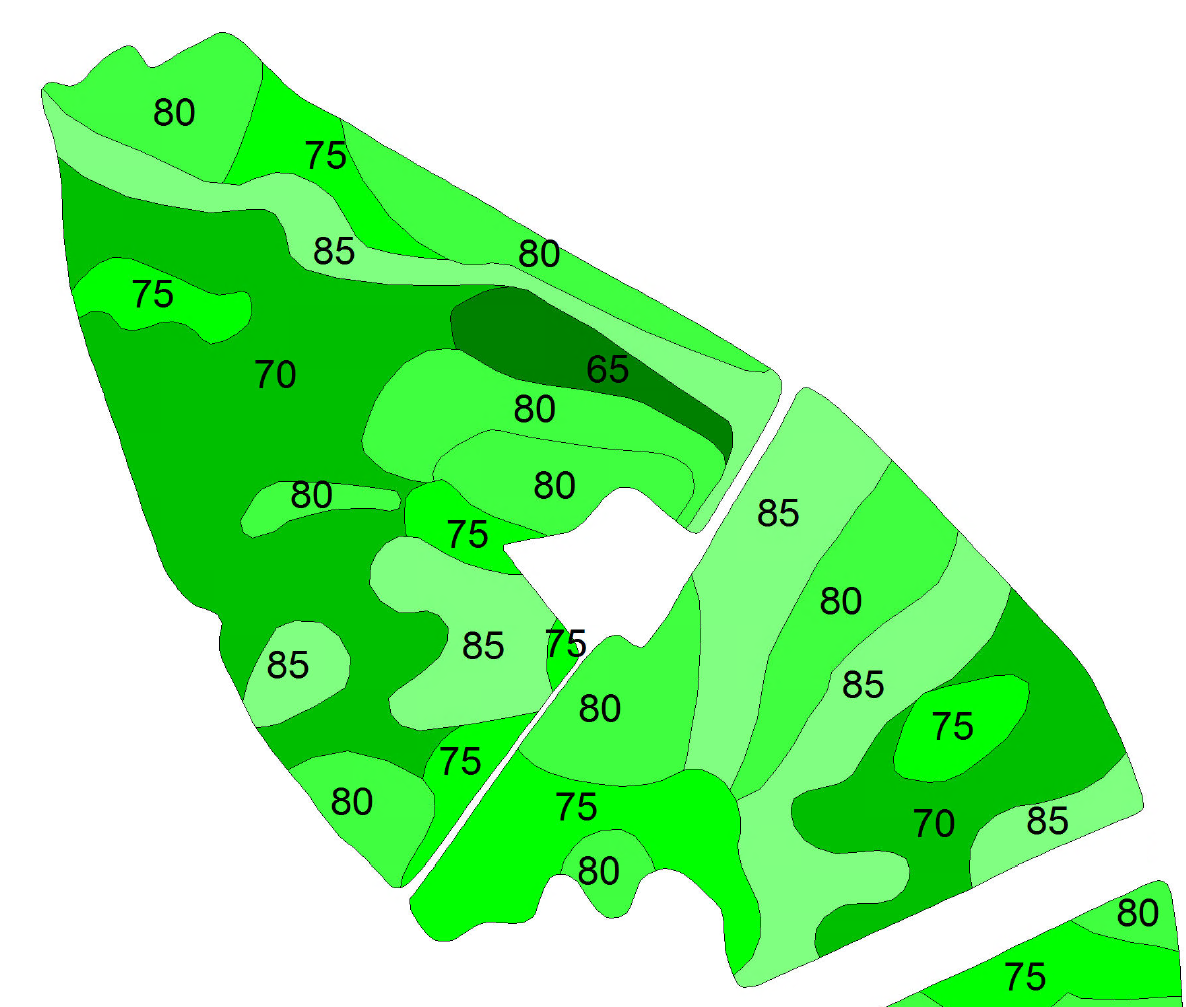 I did adjust the establishment rate for zone 7 which is a deep fertile gulley where the crop usually goes flat. I got SOYL to alter the germination from 65% up to 95%, thereby dropping the seed rate in this area. It doesn't go flat here any more and the seed saved here is used elewhere. In spring barley this spring the rate varied from 90 to 175 kg/ha according to the zone. This level of variability is quite high compared to most. The images are for approx 80 acres of very steep varying soil types - this is where variable rate helps. In a flat homogenous field I'd say you won't get the main benefit from varying rates. The image below is a yield map from one of the fields in 2012. Ignore the red areas to the south east - these were already taken out of production for ELS because they never grew much and were shaded by the trees. The boundary shape file included up to the woodland edge so the yield showed as zero. 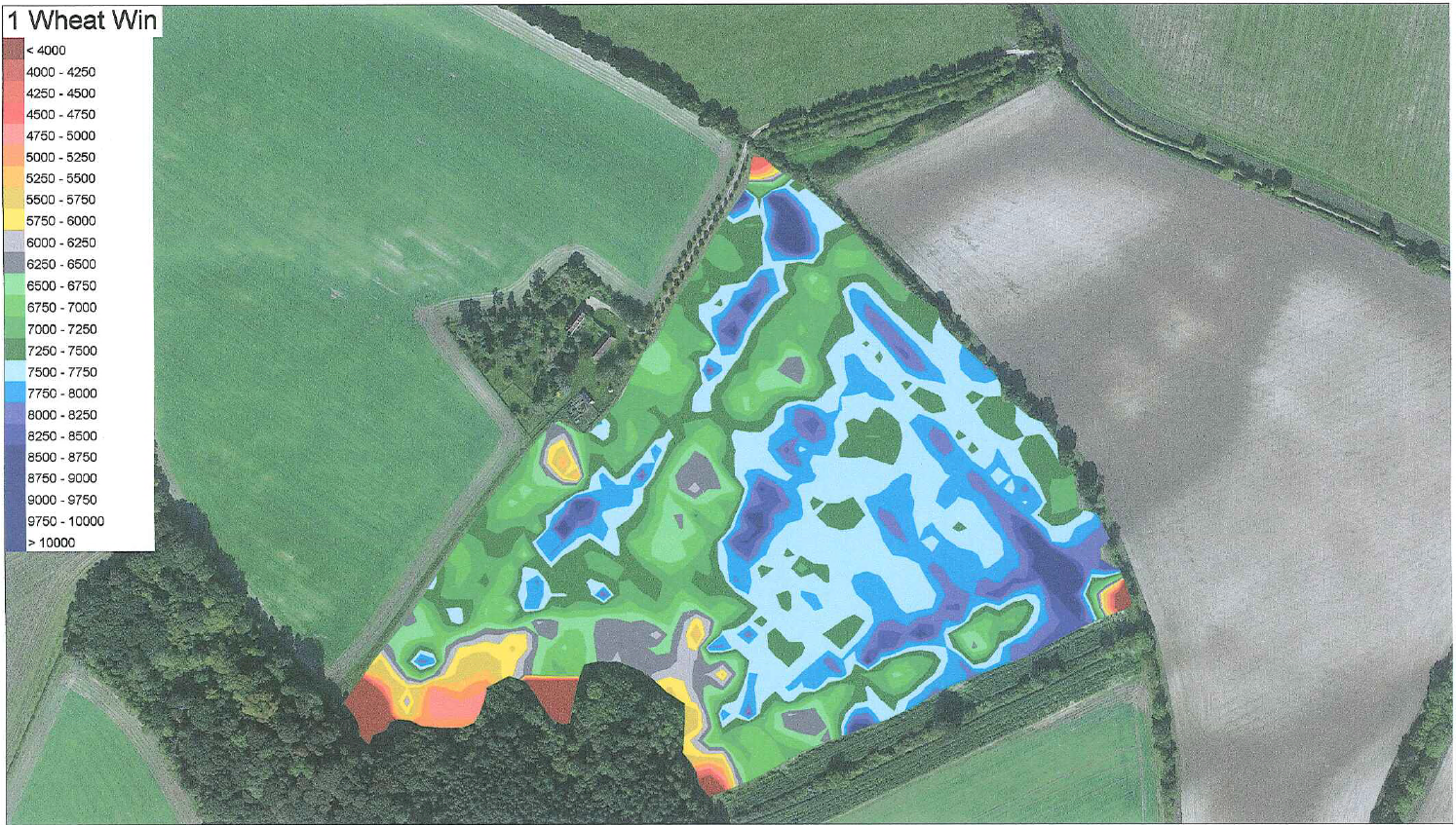 The principal question is has it increased yield above the cost & hassle of doing variable rate? The short answer is not much, but the crop is more even, lodges less and is easier to harvest. Hopefully the grain quality is more consistent too but I haven't taken samples in each zone to see what the variability is. The good soils still yield best and the thinnest gravels still drought out but this is a proactive system designed to put seed where it can achieve its best potential. In a really wet year the clay will do badly and the thin well drained soils will do best. In a dry season the clays do best and the gravels burn off in June so results will be different in different years.

I like it & have been doing the whole farm for years. I already had GPS on the drill for autosteer so it was only a matter of opting for a drill controller that was compatible. The Vaderstad Rapid I had initially was already capable - all it needed was a cable to connect the boxes. My current drill is a Claydon which needed another cable and an unlock code. Luckily for me the dealer hadn't realised the cost of these & had to provide them as it was in my spec when doing the deal to buy it.

A mechanical metering roller drive from a land wheel will need modifying to electric or hydraulic & some control boxes will need upgrading or unlocking to do VR. Obviously you'll need a GPS antenna and a way of loading in shape files to do VR seed.

We do it using @Rhiza-UK zoned approach

Seems a good idea though and can't do any harm, if you're using the service for other stuff like fert etc it costs no extra

Clive said:
We do it using @Rhiza-UK zoned approach

no idea if it works or not really - how would you quantify it or compare it really
Click to expand...

I used a control field next door but this isn't like a multi replicated trail plot - it's macro level trialling and you'll never have 2 identically variable fields next door to one another.

From what I have heard, although you may save seed in one area of a field, you will probably have to use more in another, so on balance you end up using the same amount of seed or sometimes slightly more. HOWEVER, if you achieve a more even crop establishment, then this has benefits in terms of plant health and standing power, so the actual benefit may be harder to quantify.

I also use @Rhiza-UK or Rhiza as it’s now called.
Posted this before but here’s as good a comparison as it can give you.

Ndvi imagine of flat rate seed, you can see the line where the soil type changes. 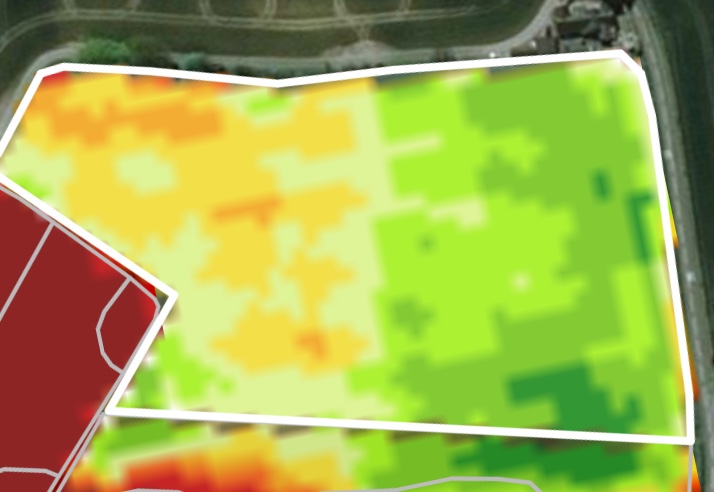 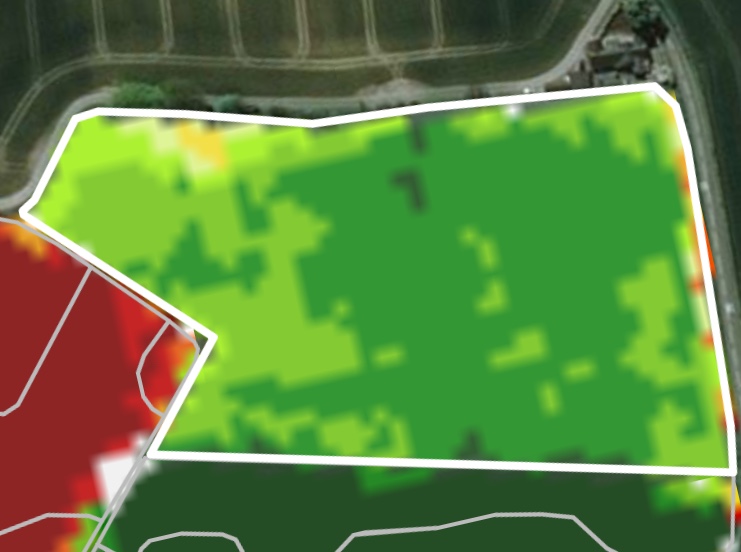 Admittedly it was a slightly better growing season for the second image but the difference in establishment is easily noticeable.

I use maps derived from NDVI satellite images in Cloud based software* designed for creating VR-N fertiliser maps, but use the plan in the seed drill with seed instead of fertiliser.
There’s a few things to consider, but if you use a ‘representative’ NDVI from the last few years, and tell the algorithm in the software that the ‘fertiliser’ Is 100% N, you’re well down the road to a finished accurate plan in a matter of minutes. I’ve got the whole farm saved as a single plan, we don’t even need to change between fields, just calibrate for each variety and go.

Edit *- I’ve used cloud based VR-N software from both SOYL and Rhiza (now Rhiza) to very good effect. The software they use is included in their package prices, and does NOT require the purchase of expensive stand alone software. The plans can be used for multiple years, long after you’ve ceased working with the NDVI / software provider.
Last edited: May 1, 2019
R

Thanks for replies.At the moment all we do is plus rate in rougher bits and minus rate (10-20%) in good parts of the field. I have yield maps from the combine,,NDVI images and soilquest maps to work from. Just got to decide how to make the best use of these maps
D

We use Omnia, as said above only on variable fields, very simple to prescribe seed rates to areas , works a treat with isobus horsch sprinter, still using same amount of seed but more even across field
Cheers dh

Are these systems accurate enough to put on 20% more seed on the first time round the headland and 50% less on the last time round where you over lap.
D

Good idea! To be fair you could do that manually?
S

I do. But then somthing distracts me and I forget.

Is it possible to do your own maps as you know your own fields i.e. Just simply divide the field into 3 or 4 parts without all the fancy maps

snipe said:
Are these systems accurate enough to put on 20% more seed on the first time round the headland and 50% less on the last time round where you over lap.
Click to expand...

yes of course they are

tr250 said:
Is it possible to do your own maps as you know your own fields i.e. Just simply divide the field into 3 or 4 parts without all the fancy maps
Click to expand...

Yes. Gatekeeper has this capability & it's the idea behind the Rhiza model.

tr250 said:
Is it possible to do your own maps as you know your own fields i.e. Just simply divide the field into 3 or 4 parts without all the fancy maps
Click to expand...

Yes - I used to do it that way using gatekeeper and before that the man on the seat used to do it with his eyes ! eyes don't wok so well no as we never really get to see our soil anymore !!

Clive said:
yes of course they are
Click to expand...

What a very condescending reply.

What you meant to say is...Yes, the system I use does, but some might not. You might find it easier to do that bit manually.