Valtra launched its updated Series V range in April of this year and Agriland travelled to Doncaster in the UK this week, to test out the new models on offer as part of the Series V range of Valtra tractors.

The N and T series ranges were part of the mid-April launch, but production of these machines had started back in February at the Valtra factory in Finland.

The most significant change with the N and T series is the introduction of a display on the A-pillar, which replaces the traditional instrument panel behind the steering wheel. 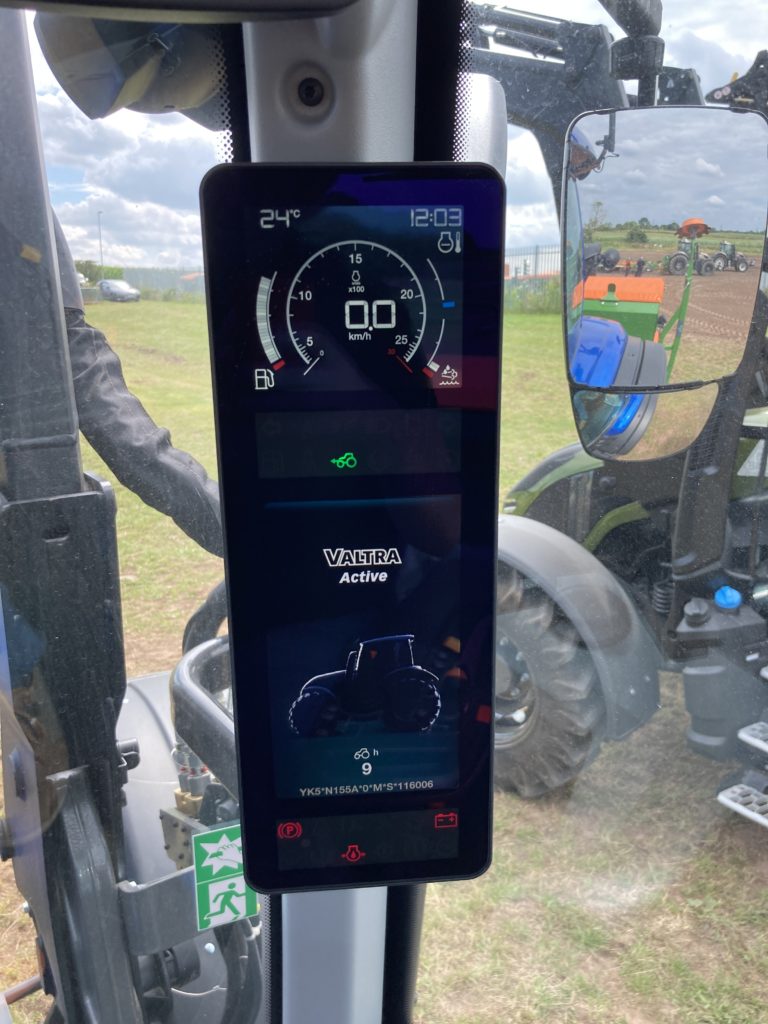 The same display can also be used on HiTech and Active models to make all engine, hydraulics and transmission settings.

On Versu and Direct models, the A-pillar display and SmartTouch is designed to divide the tasks according to suitability and also the preferences of the operator.

Valtra has designed the cab to be the “comfort zone” for the driver and has made changes to make it as ergonomic as possible for the operator.

All Series V tractors are fitted with a moveable steering column which can be operated by a pedal on the floor allowing easy access to enter and exit the cab. 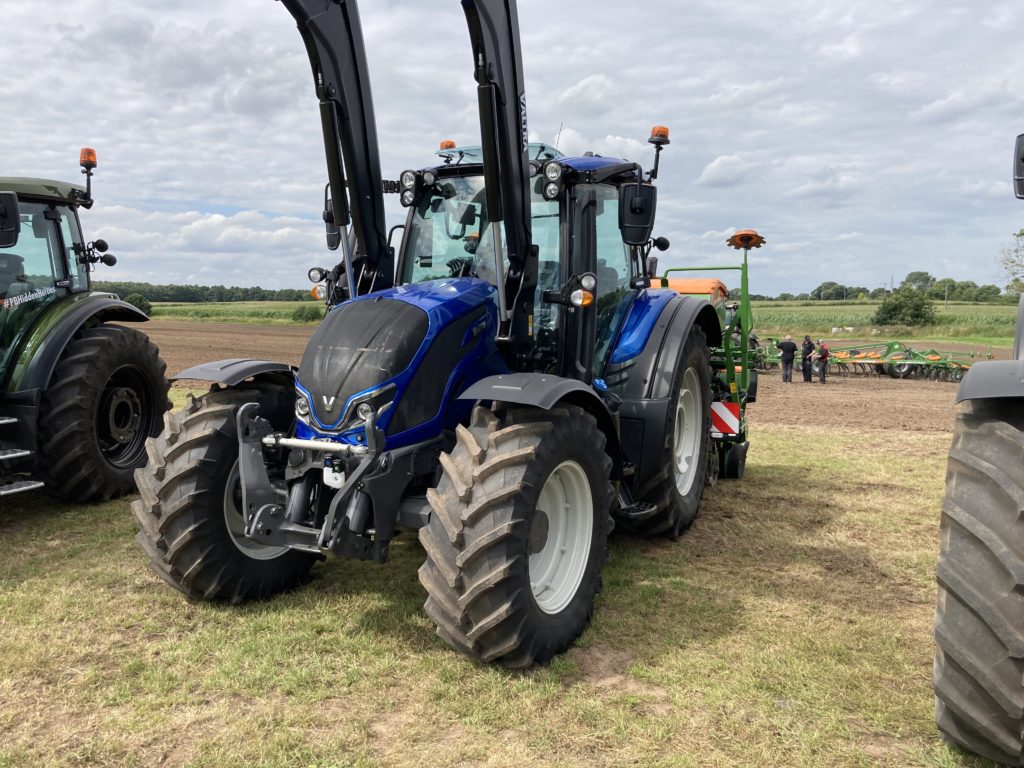 All N Series models come fitted with the 4.9L four-cylinder Stage V engine which is designed to meet the latest environmental regulations.

The cooling pack on the N series allows for the radiator to be lifted out, which means that an air line can be used to blow out any debris that would potentially be blocking the radiator.

A reversible fan option is also available on the N Series to further aid cooling and this can be controlled via the Smart Touch Terminal or a control box in the Hitech or Active models.

The engine also features the Valtra design of a hot side and a cold side with all the daily checks taking place on the left side of the engine.


The N Series also benefits from single airbag air suspension on the front axle with the option of either air or mechanical cab suspension.

The N Series can also be equipped with a front loader, which combined with the high-vis roof, allows for good visibility when operating the loader.

The main changes on the Series V have been to the equipment and layout of the cab.

The Hitech or Active specifications of the N series come fitted with mechanical rear levers and the Valtra armrest, which houses the main operating controls. 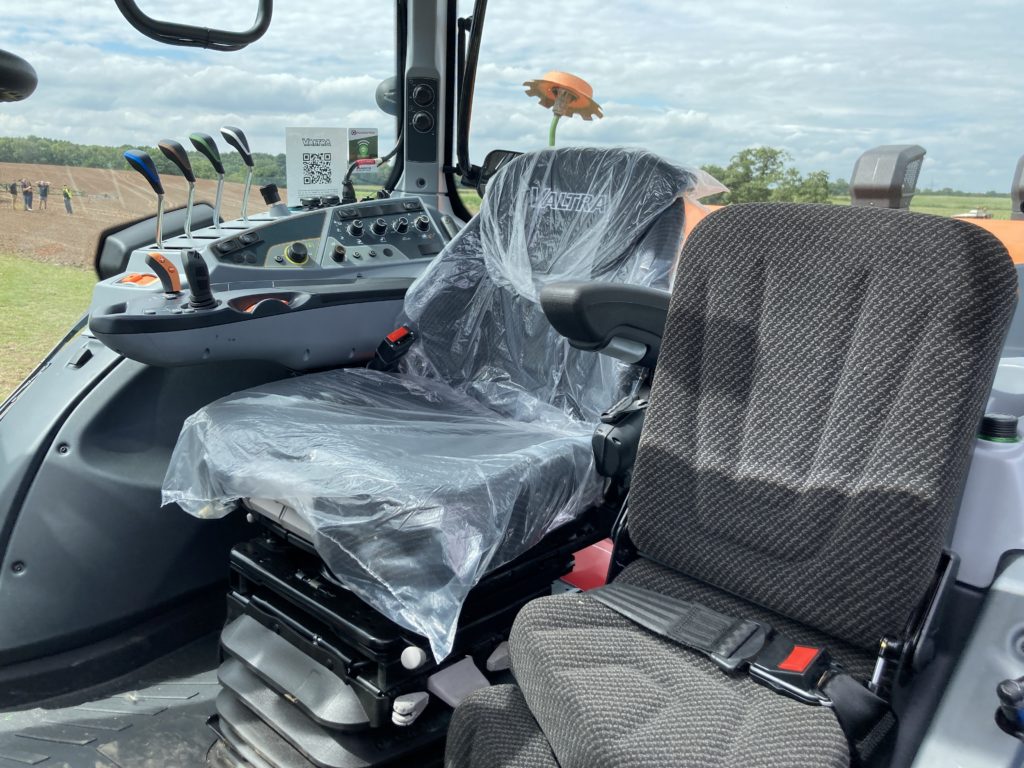 The Versu and Direct models come fitted with Valtra’s SmartTouch armrest which allows control of the rear electro-hydraulic valves fitted on those models.

The biggest change in the cab has come with the introduction of a new steering column with all dials and readouts being moved to a display located on the A-pillar.

A new return-to-centre shuttle lever has also been fitted, updating the previous lever that had been fitted to Valtras since 1998. 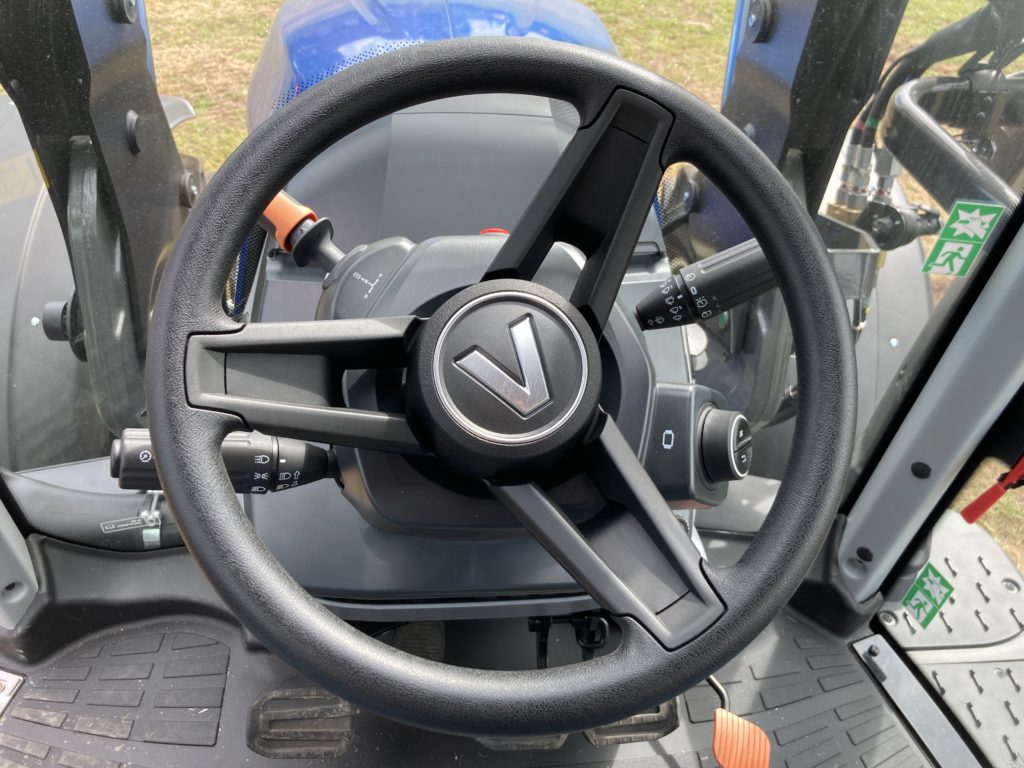 The ‘Smart Display’ also allows users to set up and customise the tractor to their own specifications, and this data can be downloaded via USB and transferred to any other Valtra equipped with Smart Display.

The Series V T Series is the top-of-the-range tractor for Valtra and comes in six models. 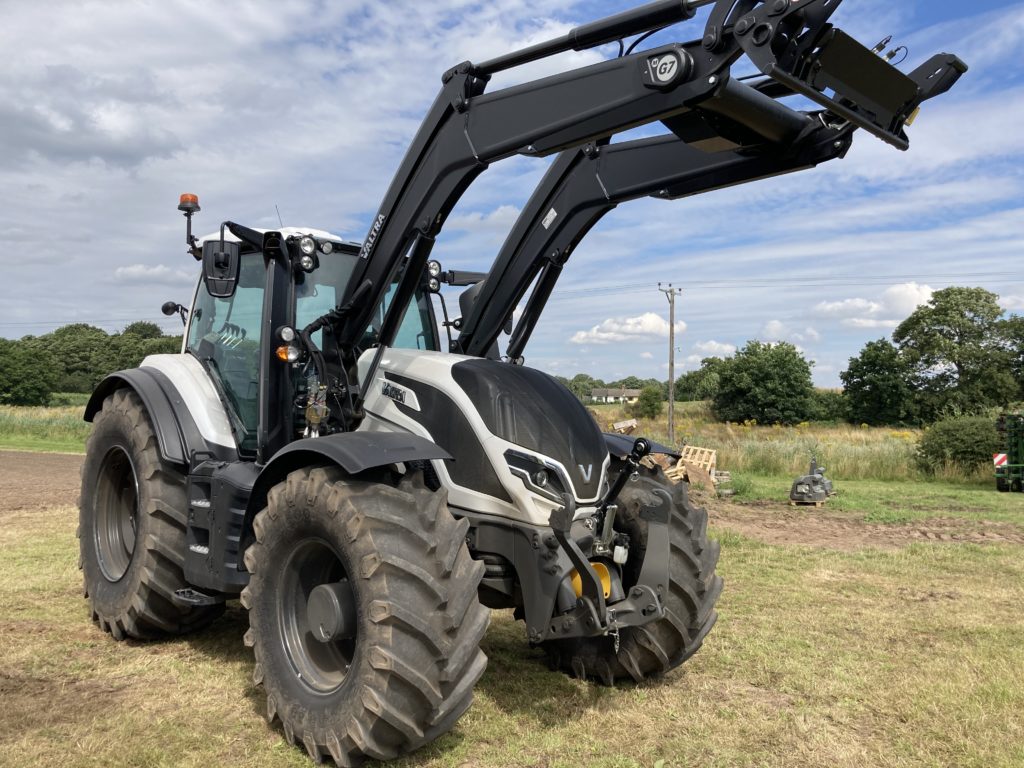 The T Series features a near-identical cooling package to the N Series which allows for debris to be blown out of the radiator, along with the option of a reversible cooling fan.

Both the N Series and T Series have the option of being fitted with the “premium” interior, which consists of dark headlining along with dark plastics, a leather steering wheel and chrome accents around the air vents, steering wheel and pedals. 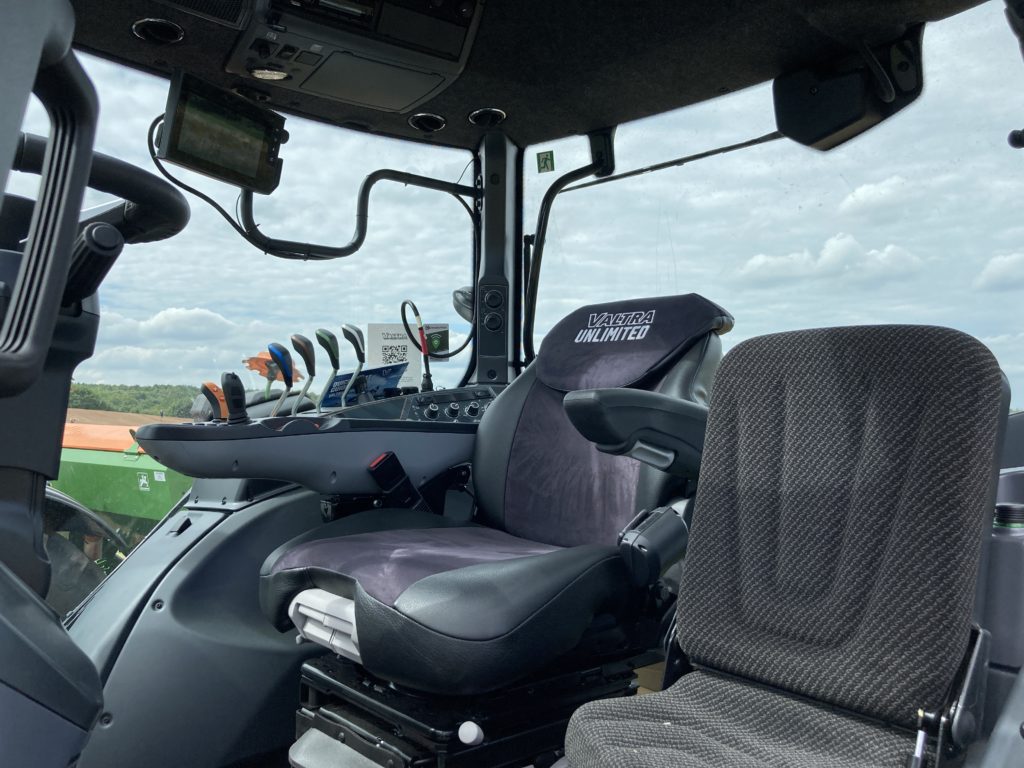 Many of the features of the N Series cab are carried over to the T Series.

The T Series can be equipped with ISOBUS guidance which allows the operator to control guidance, section control and variable rate from the SmartTouch extend terminal.

The buttons on the side panel have been designed to be large and chunky to aid the operator and make it an easy tractor to work from. 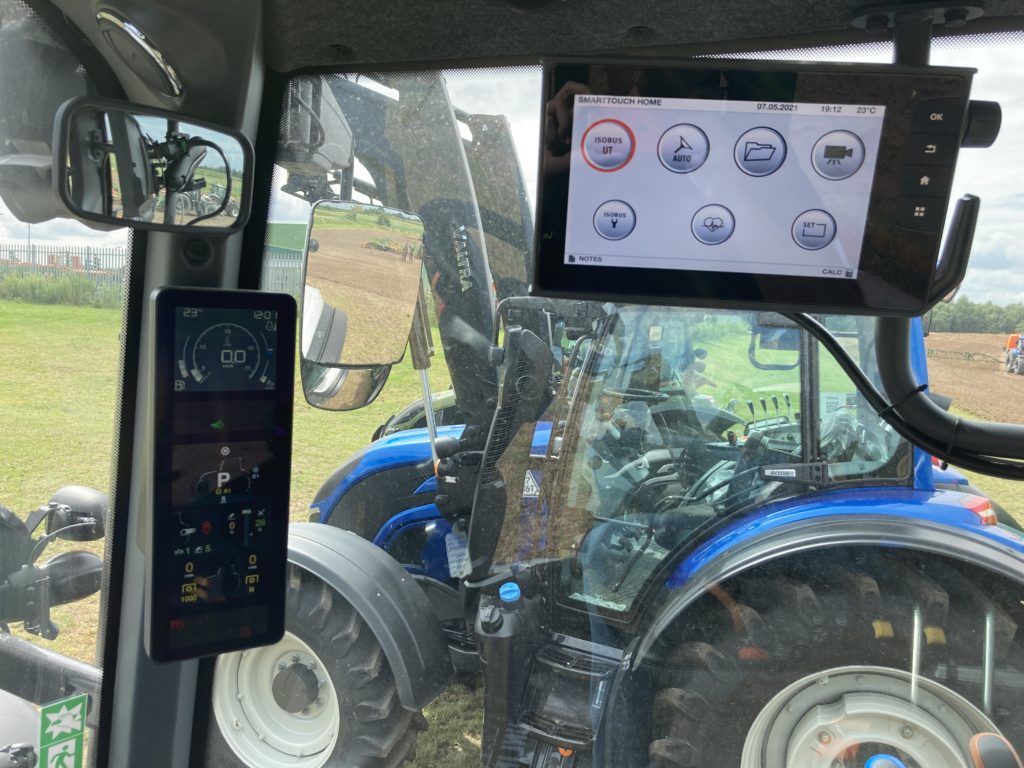 The N Series and T Series range of Valtra tractors has upped the ante in terms of driver comfort and cab technology while retaining a solid mechanical foundation which is more than capable of all sorts of tasks, on and off the farm.